For the last several years we've had honey bees set up shop in the trunk of the locust tree right by the front door.  One year the hive survived all winter but most years they perish for one reason or another and sometime in June a new swarm moves in.  They prosper for a few months and then send out another swarm.  A new swarm will send out scouts to find a place to live and until a place is found they will sit quietly in a big cluster and wait for the scouts to suggest a new home.

We try to find a beekeeper to come and collect the swarm if it's anywhere within reach.  Lots of beekeepers like to get 'free' bees!  Chances of surviving the winter if they start late in the summer are slim.  There isn't time to make sufficient honey to support themselves through the cold months and they need a certain number of bodies to keep warm enough too.  Being added into a 'kept' situation  - usually added in to an existing hive to boost the numbers - is their best chance.  Some years they are in a helpful location to collect.

Here, two swarms emerged at the same time and clustered on opposite sides of the flower bed by the road. 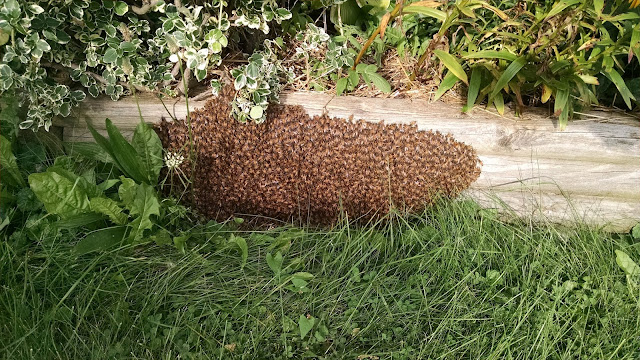 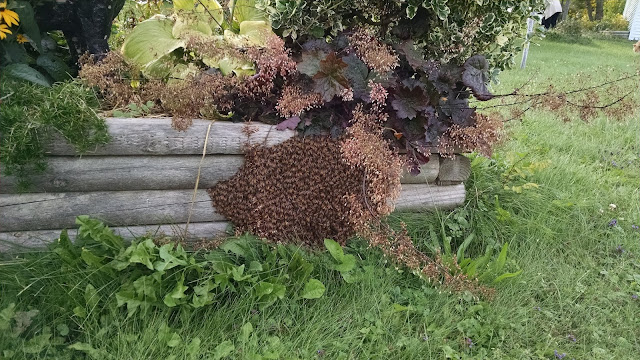 The beekeeper who collected them had to work on her hands and knees. 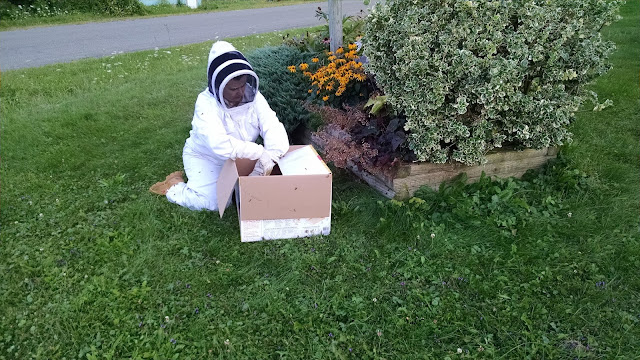 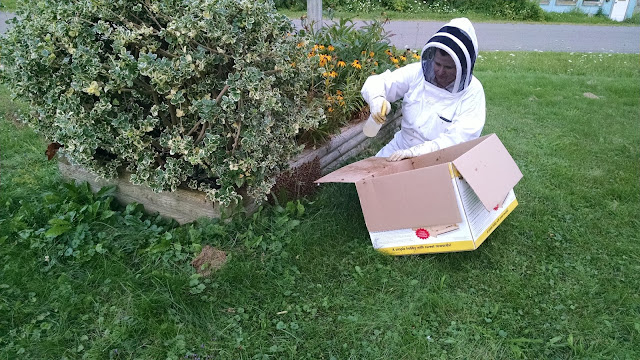 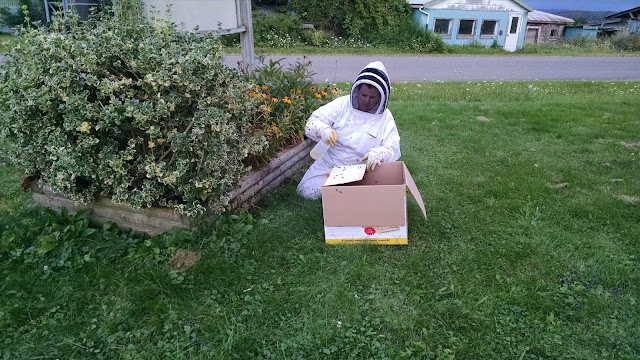 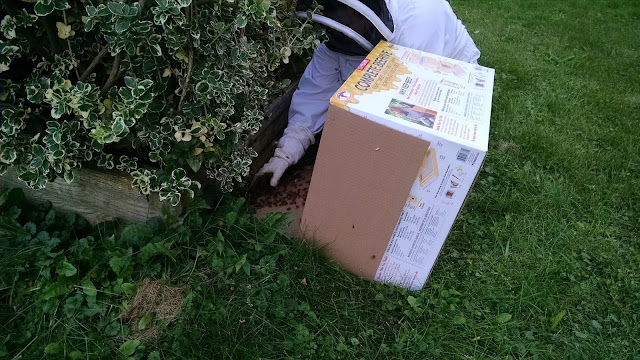 It was quite a nice bunch of bees! 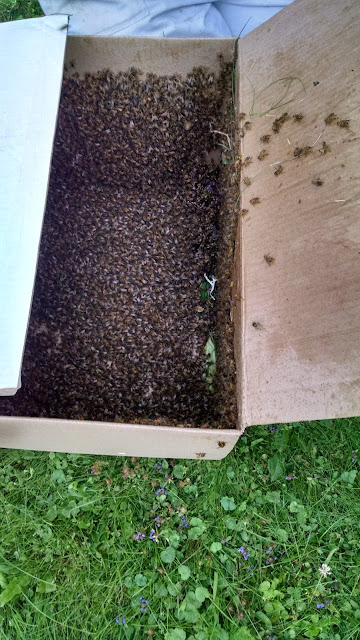 Other times they have landed where we have to be creative to reach them. 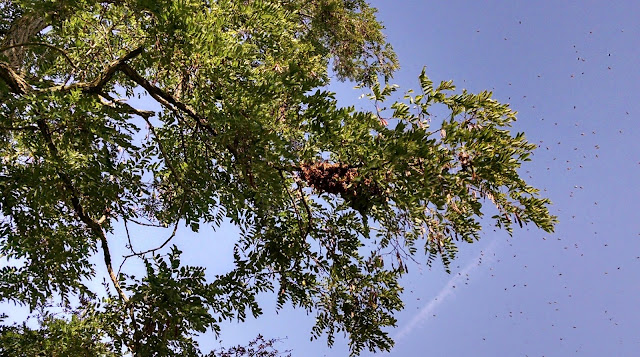 A loaded hay wagon proved just high enough to be able to reach the branch and clip it off, putting the whole thing into a box. 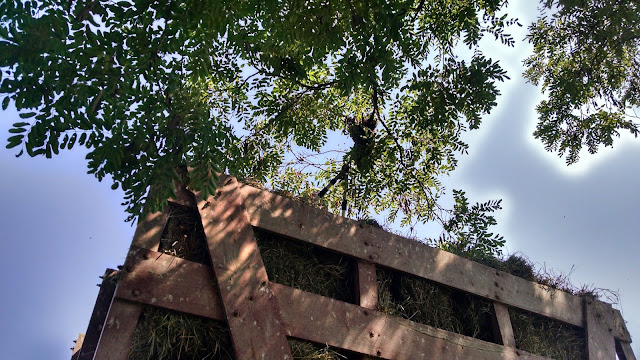 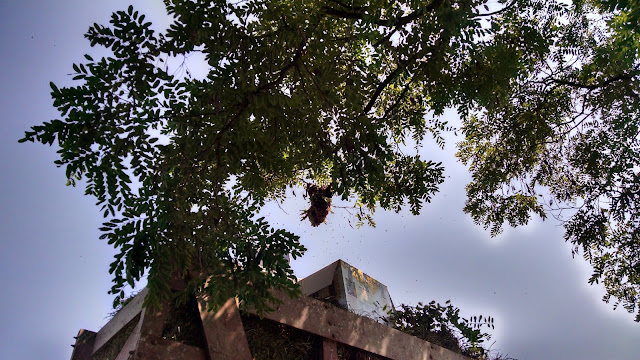 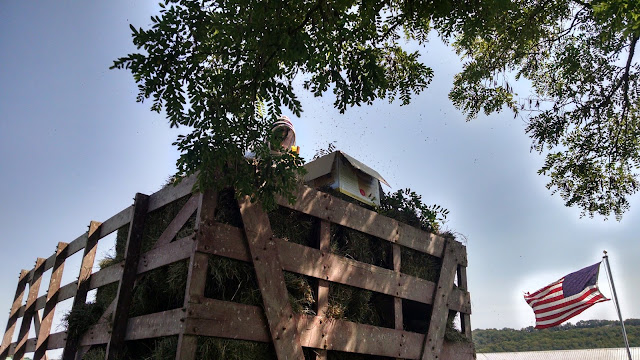 In any case, the point is to end up with the bees in a box.

Monday the bees did it again.  Our usual beekeeper friend was unavailable so we made the acquaintance of another person through a referral - Mr. Hearn.  He came with a helper and only lives about seven miles away.  They came well prepared with hive box parts and could drop the bees directly in rather than use a cardboard transport box. 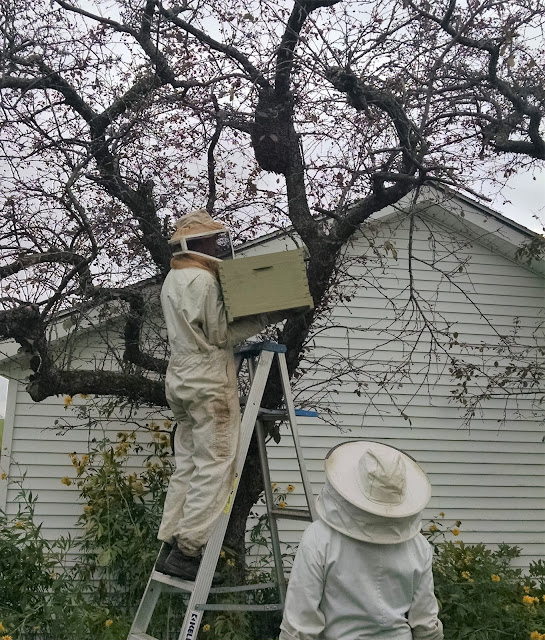 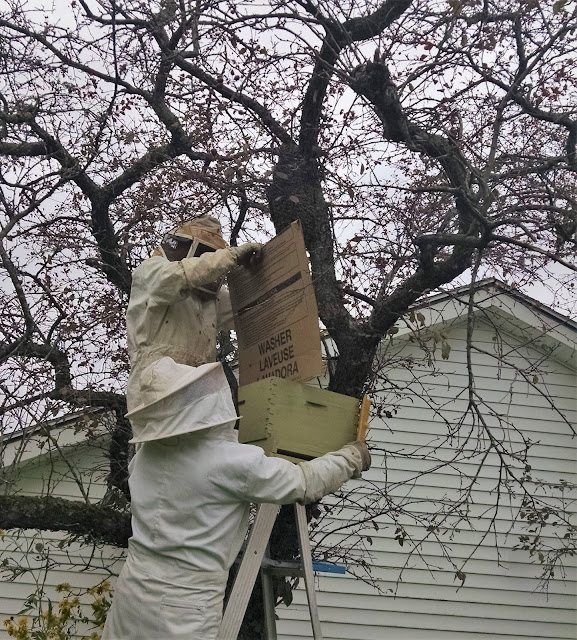 The swarm was about ten feet off the ground right on the trunk of a crab apple tree - not a place where you could clip off a branch and drop the whole thing into a box - and it was awkward to stand with one foot on the stepladder and one foot on a branch.  But they were prepared and had soft brushes and a big sheet of cardboard to act as a slide for the bees.  It was cold and windy and trying to spit rain and the bees were crabby.  I apologize for the crummy video - filming against pale sky was too taxing for me and the camera to figure out.  You can hear the clumps of bees thumping on the cardboard. 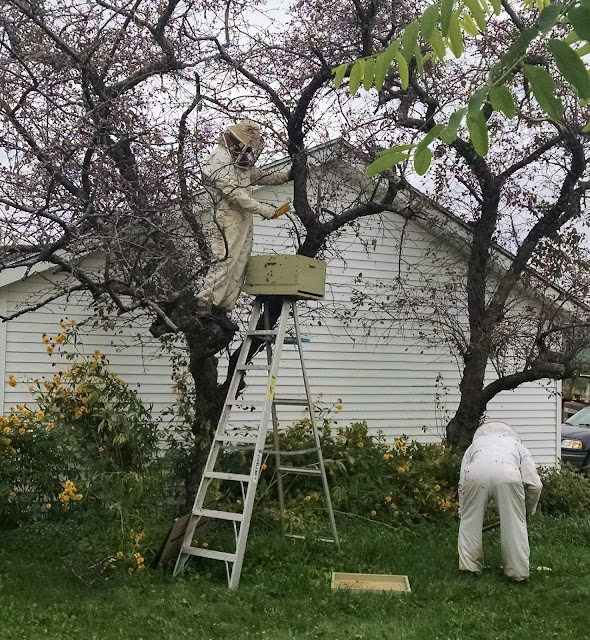 Once the majority of bees were brushed off the tree they brought the box down and picked out a few twigs that had fallen in. 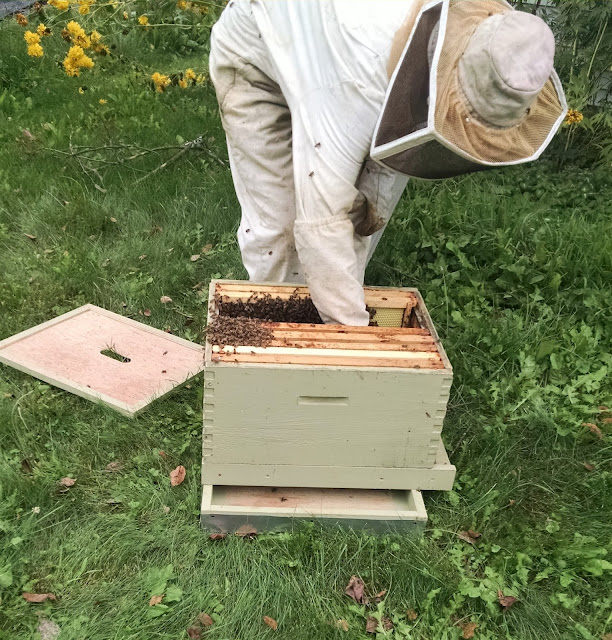 While most of the bees had tumbled into the box there were a few hundred buzzing around.  We used some tote bins from the garage to lift the hive closer to the place the bees had been and enjoyed a nice conversation while the flying bees figured out where the queen had gone and willingly went into the hive by themselves.  I don't think there a dozen bees around when Mr. Hearn left and without a clear purpose they would end up going back to the hive in the tree and not just die. 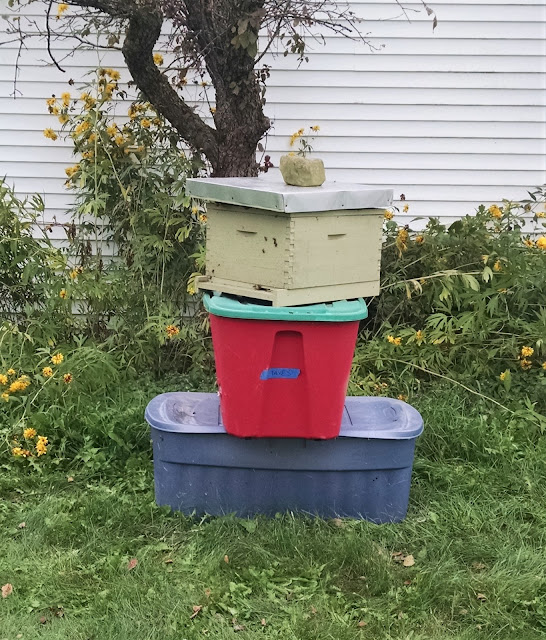 So the bees have a new home and we have new friends.  Mr. Hearn has invited me over to the bee yard for some work sessions next month and I'm happy to go learn and be an extra pair of hands.  I guess it's time to invest in a bee suit!

Email ThisBlogThis!Share to TwitterShare to FacebookShare to Pinterest
Labels: bees