Look in the Dictionary Under 'Spring Rain'... 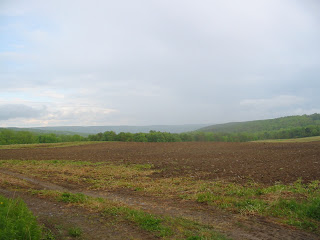 Light, warm rain on open ground
This is the epitome of spring weather here, complete with birdsong, peepers and tree frogs calling, and the wonderful smell of wet growing things.  If I could bottle this and sell it in the city I'd be filthy rich.  (Mind you, I know I'm already rich in family, friends and lifestyle, but I mean the kind of rich that would get the buildings painted, old fences replaced, landscaping hired out and maid service till I die.)

Phlox is blooming in front of our neighbor's unused pasture and the tiger lilies are looking quite healthy despite the beating they took from temps in the 20s a couple of weeks ago. 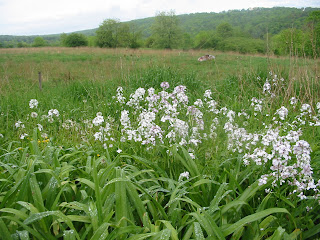 Phlox in May, lilies in July

The non-sunny weather is very helpful right now.  Andy is doing the big spring barn cleaning.  It's a two day affair - clean and bed  half the barn one day and the other half the second day.  Since the sheep can't be trooping back and forth to get into the bunk while he's running the skidsteer, we set up temporary gates to keep them on pasture all day and it's essential that the weather be such that they won't suffer from heat.  This is perfect for our purpose.  It's also working out well that he can spread all this manure on the field beyond the one that's being fitted in the top picture.  It will get turned under when he plows and be used by the corn that's going there. 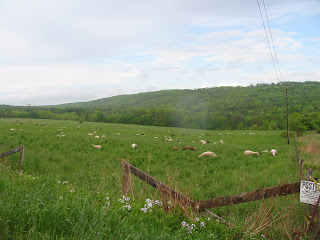 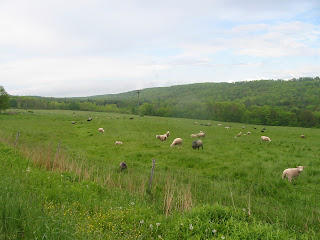 Lambs are belly-deep in nice grass. 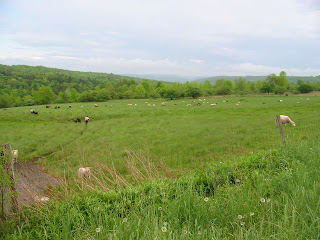 ﻿
Of course, in about 2 weeks we'll be fretting about rain because we'll be trying to make dry hay, but in the meantime we'll just enjoy it.  We've certainly waited long enough.
Posted by Sheepmom at 2:57 PM 1 comment:

Blogging has gone out the window the last few weeks.  Events have swept along pretty rapidly, some great and some pretty lousy (kinda the way life usually goes, but compressed into about 20 days).

The first good thing was that Julie and I trekked to the Maryland Sheep and Wool Festival.  I carried down five fleeces for the show and sale, fleeces for someone who had reserved some and could pick them up there, and fiber to be made into roving and quilt batting.  It was less fiber for processing than I had hoped to take, but at least there was some. 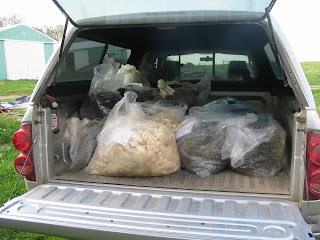 The weather was perfect - sunny and warm - and we made a couple of stops along the way, most notably at a Mennonite bakery along the Susquehanna River where we indulged in their annual Moonpie Madness weekend (twenty different flavors, but so large I could only eat one at a sitting and that's saying something.)

The festival was heavily attended, as always, but honestly I didn't see the quantity of goods being carried out that I normally do.  I heard later that sales were uncharacteristically light. 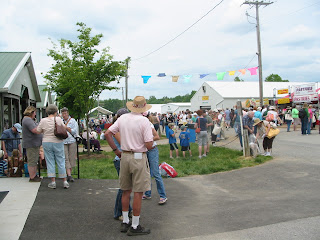 Just a hint of the throng

One of the first stops we make is the Skein and Garment Show.  The sheer mass of lovely, intricately made things to look at is staggering.  Considering the amount of talent and time represented by the items in the show makes the ribbons earned there really mean something.  And so it was thrilling to find a skein made from my Frog Pond roving had earned top honors (Best Novice Spinner) for fellow guild member Carole "CC" Clark. 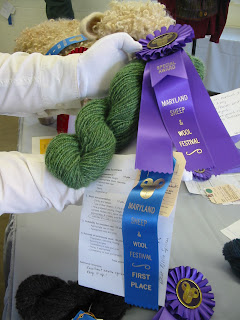 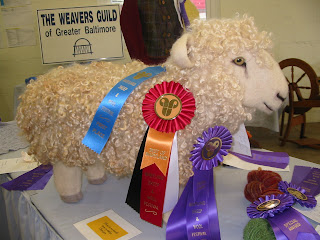 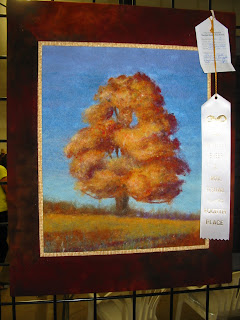 Without doubt, however, the best part of Maryland was a surprise appearance by my brother, who drove 6 hours one way in hopes of finding me on the grounds.  We got lucky and walked into each other within 15 minutes of them hitting the front gates.  (He admitted to being pretty nervous when he arrived and saw an ocean of cars worthy of a Super Bowl lot.  He had no idea how many people actually attend MD S&W).  He and DW Shirley could only stay a few hours and then turn and go 6 hours back.  Thanks, Steve. 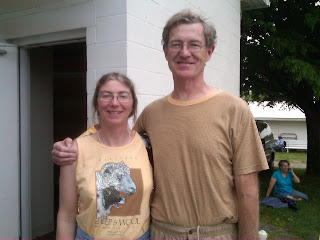 Me and "Brother"
﻿
﻿
The sheep shows are always fascinating to me and I could spend all day watching the classes, but there is so much else to do our attendance in the bleachers was spotty.  Of course, though, I had to watch the Cotswold show and was even pressed into service helping the Crossman's of Ewetopia farm in the flock class (a yearling ram, 2 yearling ewes and 2 ewe lambs from the same farm). 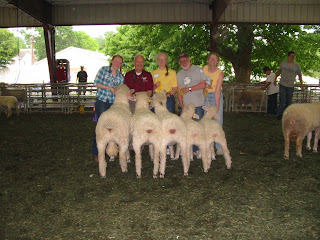 The winning flock of Cotswolds at Maryland

﻿
﻿
﻿
﻿
Now for the crummy stuff.  Just as I was preparing to leave we started seeing scours in the lambs.  We've seen this in previous years, and it's always been a few lambs who have an upset for a day to two and then it clears up.  This time we had a tidal wave.  A group fecal showed coccidia, so we began treating the lambs that developed the runs with an oral medication - a weight-based dose of liquid once per day.  By the time I left we had 25 lambs on a chart that had to be found by ear tag and treated daily. 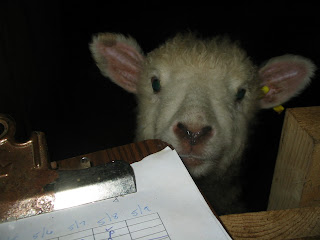 Hi.  I'm not on the chart, so of course I'm going to stay right here, under foot.

While I was gone the number doubled and we lost a lamb, and then another Monday when I returned.  To make a long story tolerable, we were having a coccidia overload brought on chiefly by the extra-large lamb crop and the two freezing wet weeks in late April that delayed us getting the flock out of the barn and on pasture.  It's normal for coccidia to exist in sheep without causing problems, but too much of it in young lambs DOES cause problems and being housed so closely (even though our barn is clean and well-bedded) put more coccidia into the lambs than they could tolerate.  Additionally, I took the lamb that died on Monday to Cornell for a full necropsy (along with fecal samples taken from some other sick lambs) and those findings included the presence of Clostridium which is a very unwelcome discovery since we have a strong vaccination program to prevent that.  Either the coccidia debilitated that lamb to the point that the passive immunity from mom failed to protect it, OR there is a strain other that the C and D types that our vaccine includes.  The lab at Cornell is typing the Clostridium now so we'll soon know if we have to begin vaccinating for additional strains.  This unhappy situation caught us flat-footed since we haven't seen it before.  We now have a protocol of treatment for next year that will begin with the ewes even before they lamb and continue with the lambs themselves.  We've started it with this year's lambs too, but the damage is done to several and they are going to be unthrifty, poor-doers assuming they live.

I hate lessons that come at the cost of dead animals.

Things appear to be under control now and we've not had any new cases since the second week of May.  Now that we've got the flock on pasture the pressure *should* be off.... but we're still wary, believe me.

The flock worked through the Baby Pasture in just a few days, but it gave them time to acclimate to fresh grass. 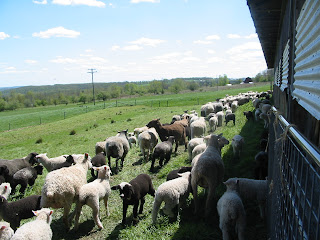 They didn't go far when turned out to the big pasture. Yeah, baby!  This is what we're talking about! 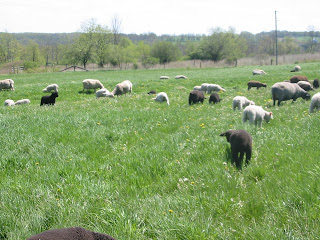 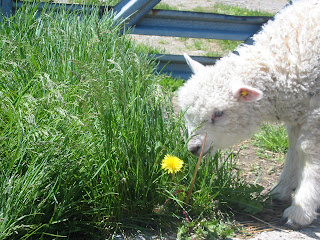 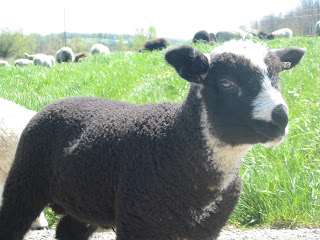 I don't know about this grass stuff, but the sun is sure nice.

﻿
While the situation with the lambs was very time consuming, other things have been going on, including Shepherd's Market (which I have no pictures of - drat - but which you can see over at Caroline's blog), and....drumroll......

LaLa is done!  Yes, the guild KAL which I cast on for in October on the bus to Rhinebeck is finished and blocked.  Well, blocked sounds pretty aggressive - all I did was give it a soapy soak and rinse and laid it out in the sun to dry.  I did take a ruler to it to make sure it was symmetrical in all directions but I didn't need to crucify it with pins - it laid there very obediently and dried as I wanted. 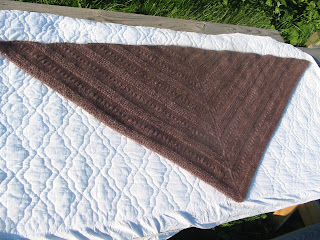 Awkward angle, but I had to step sideways to accomodate the wide wingspan. 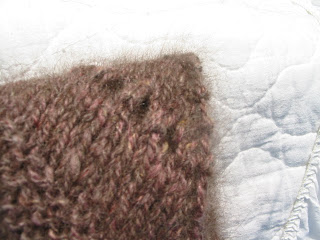 The Molly fur in it raised a nice halo like angora.

It's soft and fuzzy and warm and the shawl pin (Stone Edge Fibers) that Julie gave me looks smashing with it. 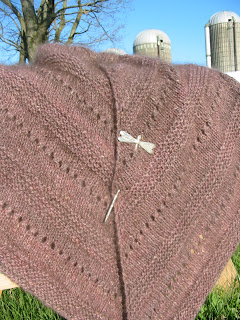 I would never wish away the warm weather, but I'm going to love wearing this when it gets cold again.  This and all the LaLa Shawls will be on display at the Finger Lakes Fiber Arts Festival in September. 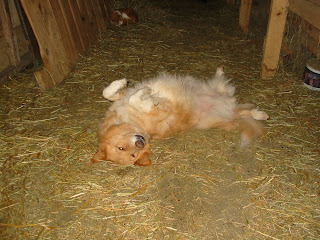 Phooey.  Can your shawl be THIS cute??
﻿