Winter is creeping along - the calendar confirms it even when it seems to be never ending.  The days are enough longer that we can see it so that's a morale booster.

We had some miserably cold weather in January.  Taking care of livestock during times like this is a challenge to say the least.  Water is always an issue.  Keeping the pipes from freezing requires some ingenuity.  We are fortunate to have an excellent well which supplies the house, barn and outbuldings but that means pipes are buried several places.  The pipe to the barn runs under the road (!) from the house and up through the floor of the barn about eight feet from the outer wall.  Keeping it from freezing was never a problem when we had the dairy since the herd kept the barn above freezing no matter how cold it was outside and with so many cattle drinking day and night the water was almost always flowing.  Now, with sheep in the barn the temperature is just about the same inside as it is outdoors.  We run hoses to the various tubs in the warm weather but now we have to lug buckets. The 'faucet' is the vertical pipe that comes up from the floor around which Andy built an insulated column.  A short hose can be directed into buckets.  The narrow pipe chamber is usually kept warm enough with a 100 watt incandescent bulb mounted about half way up from the ground but when it's very cold we use a trouble light and dangle an extra bulb in there, down almost to ground level. Because the space is insulated and no animals can get into it we feel that it's a much safer system than heat tape. 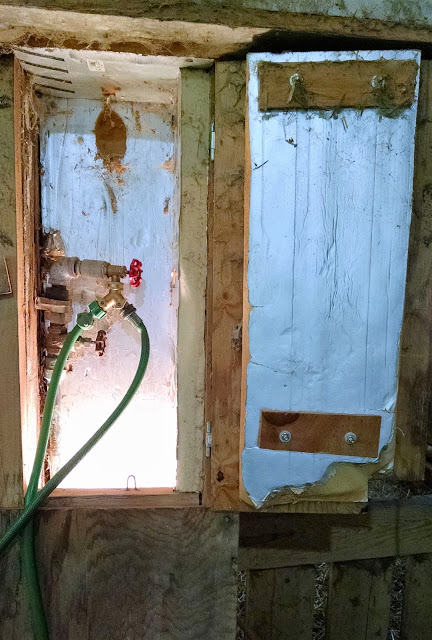 With the door closed the space stays above freezing and water can be drawn for the sheep.


The younger sheep laugh at the cold but it takes a toll on the old ones.  They are receiving a grain ration twice a day and now we've added some alfalfa and beet pulp pellets in an effort to get more calories and energy into them.  Dollar and Bunny are within a couple of months of their 15th birthdays and the cold is grinding them down.  Both are wearing double sheep coats with a thick beach towel sandwiched between for extra insulation.  Dollar is spry but really starting to look like The Crypt Keeper.  We bring her out into the alley to get an even more special ration of grain without competition. 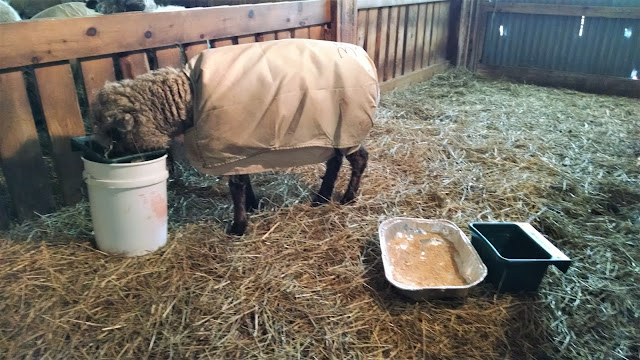 "Grain is especially good if you can steal it from a bucket other than the one they give you!" 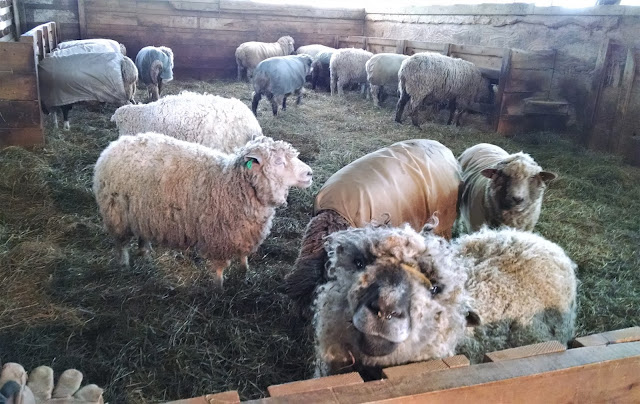 We've even taken to bringing the bucket of grain into the house before feeding so it can set next to the chimney and get warmed up.  Everything the sheep eat is ice cold - the hay, the grain, the water - and it all draws warmth away from their bodies when they consume it.  A hammer and sieve are used to remove ice from buckets and tubs as needed, up to four times a day.  We carry down two gallon jugs of really hot water from the house to warm up the water the geriatrics are drinking and also use a bucket heater to warm the water in some of the other buckets but we don't leave it plugged in - we only use it while we're in the barn. It takes the edge off the cold and keeps the water liquid a bit longer. Water is so important for good health and we don't want anyone to drink less because the water is nearly slush.

But last Thursday we had a real warm up and we grabbed the opportunity to change the coats to the next bigger size on those who needed it .  We have some awfully pretty wool under those coats! 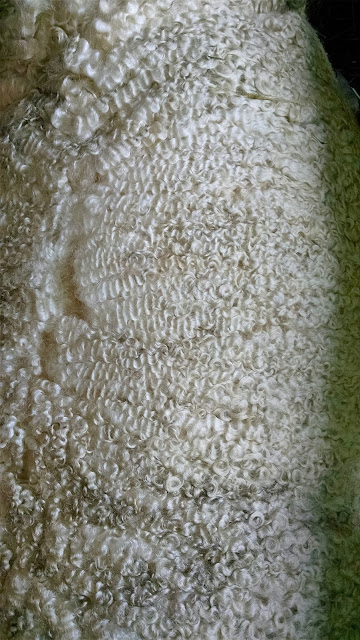 Not a speck of VM on Oleander the Cotswold! 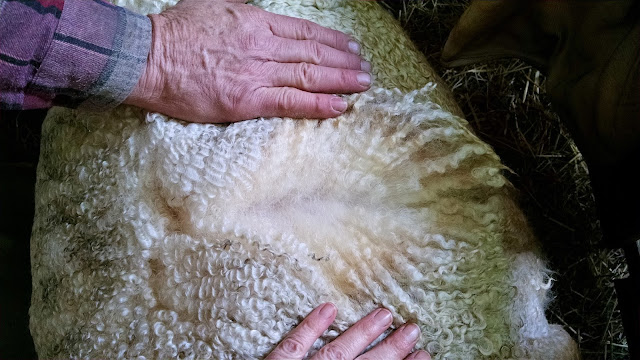 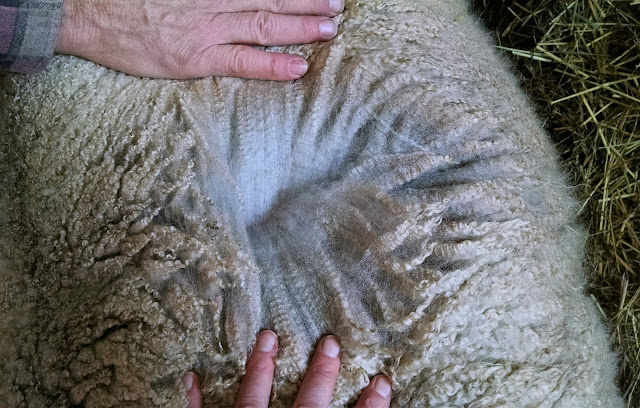 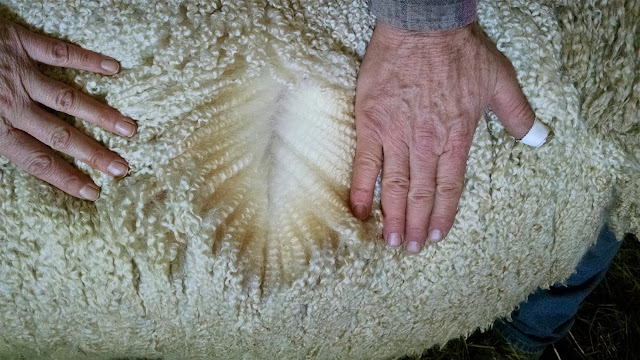 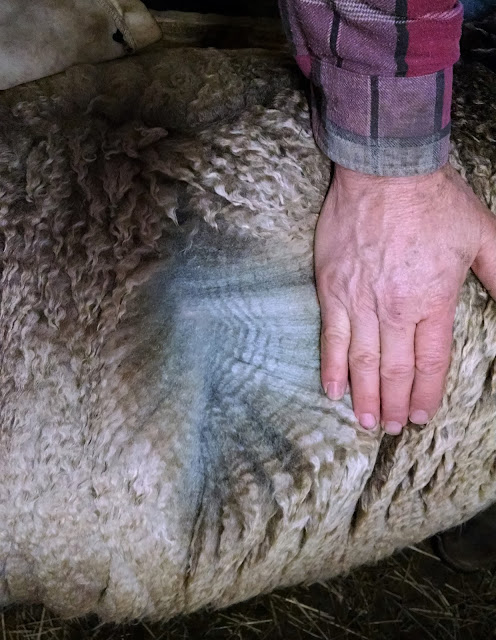 We also found a few ewes who had lost some condition from the last time we handled them.  They weren't old enough to need the geriatrics pen but were past middle age.  We shifted them to the pen that holds the bred ewes as there was plenty of room.  They will benefit from the grain ration and better hay.

One small ewe, Prudence, we put in with the geriatrics because the bred ewes were going to be too pushy with her.  She had meningeal worm when she was a lamb and although she recovered with treatment she doesn't have the strength and balance in her hindquarters that a sheep should.  After an initial banquet at the hay feeder she announced she was DONE with being in that group.  She baa-ed incessantly and has a sad, mournful voice by nature so it sounded like someone was dying a hard death all. the. time.  I mean, she would not shut up even during feeding time.  Figuring that we were causing her more stress than assistance we put her back in with the main flock.  Now we know what she was yelling about - she missed her sister, Patience.  Sheep have a strong sense of family and some are even more bonded than others.  These two are really tight. 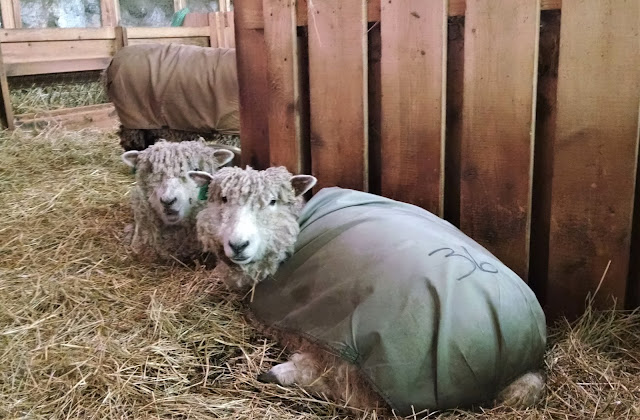 Another mid-winter project I've gotten into is making spinning batts from some of our dyed Cotswold.  I want to have a good bunch of them for the vendor booth this year and two different events are coming up fast - The Knitting Circle Fiber Arts Festival  and the make up date for the Roc Day Gathering hosted by the Black Sheep Handspinners Guild.  I'm hoping they'll be appealing to all spinners but especially to those who haven't yet tried Cotswold.  The batts are a hefty five ounces (closer to six really, but we're calling them five) so they should yield enough yarn to make something large enough to get a real sense of how the fiber handles. 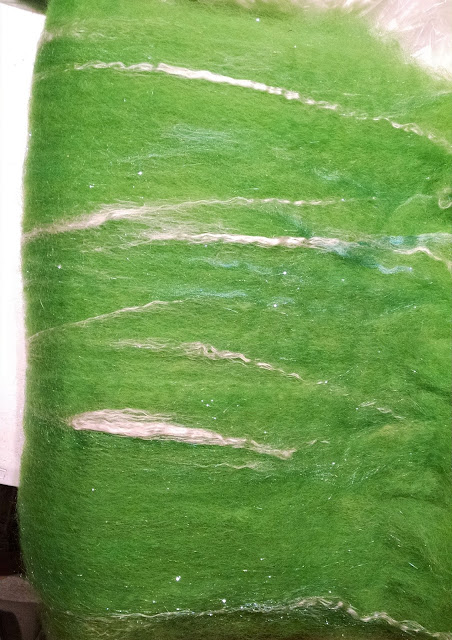 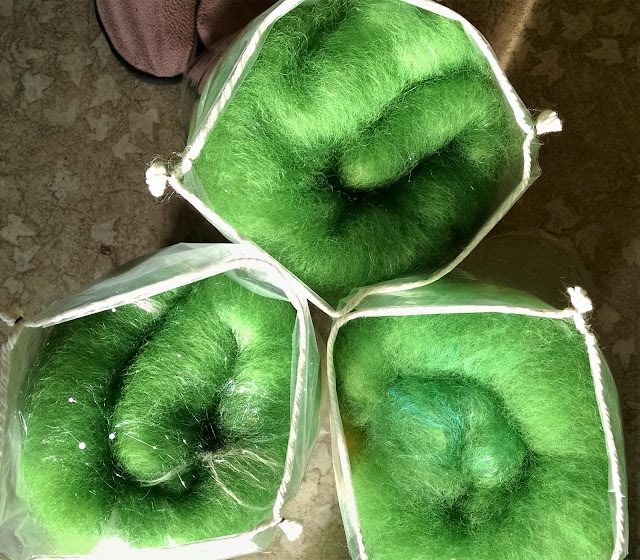 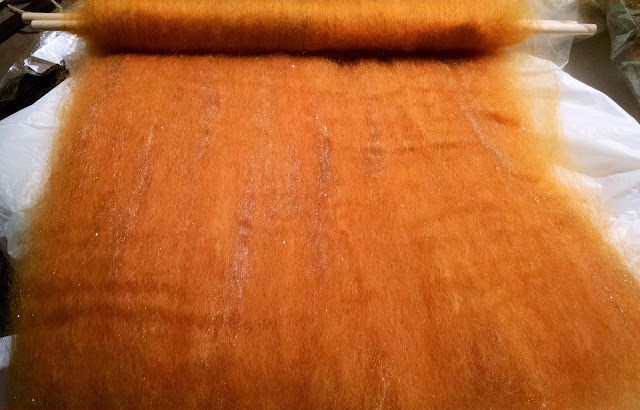 Orange batt with "Tropic" firestar which doesn't show up too well in the picture but has shades of red and brown. 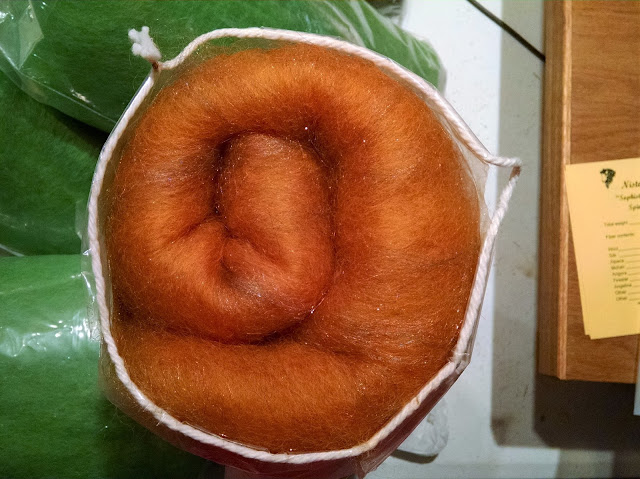 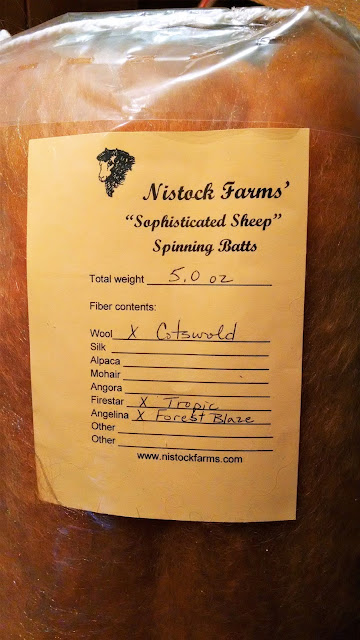 I have tags that identify the various fibers that I might incorporate into any batt.  I think under 'Other' I should list cat hair/dog hair just to be safe.  ;-)
Posted by Sheepmom at 7:07 PM 6 comments: