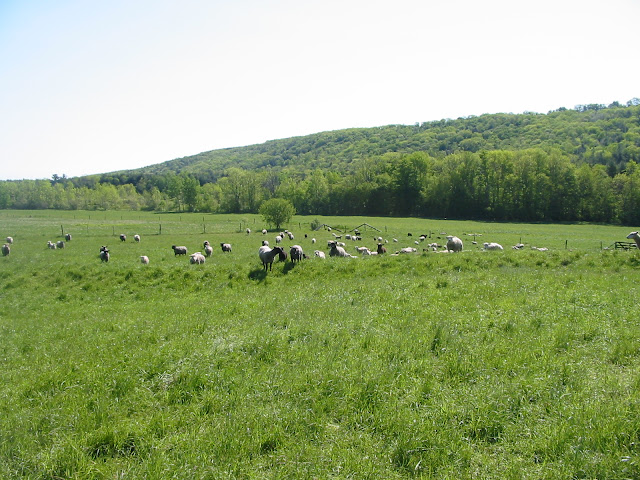 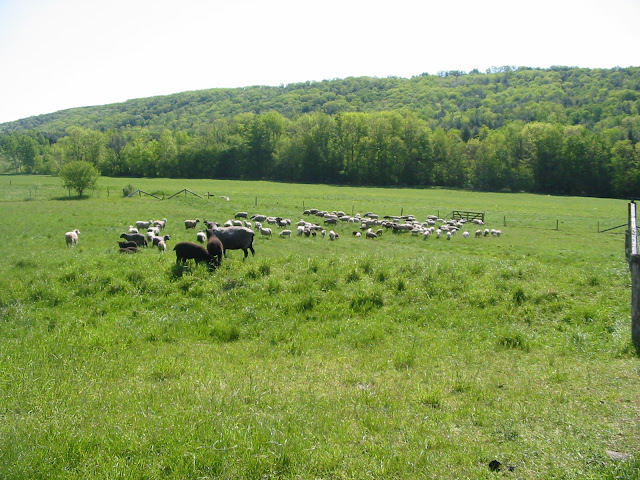 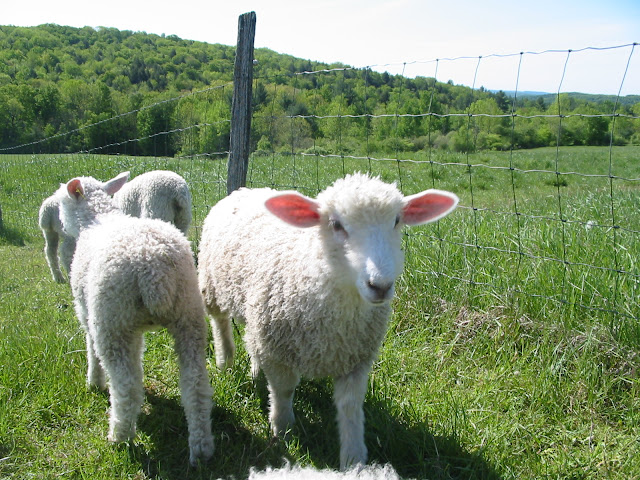 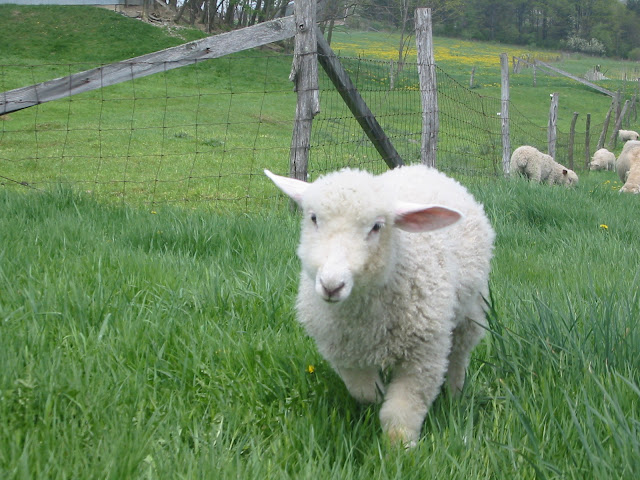 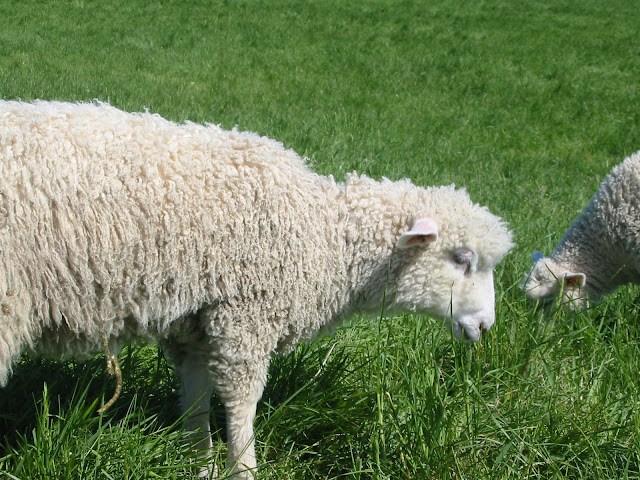 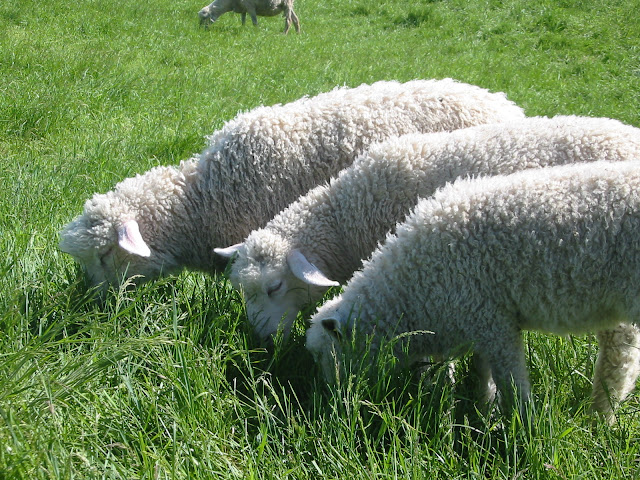 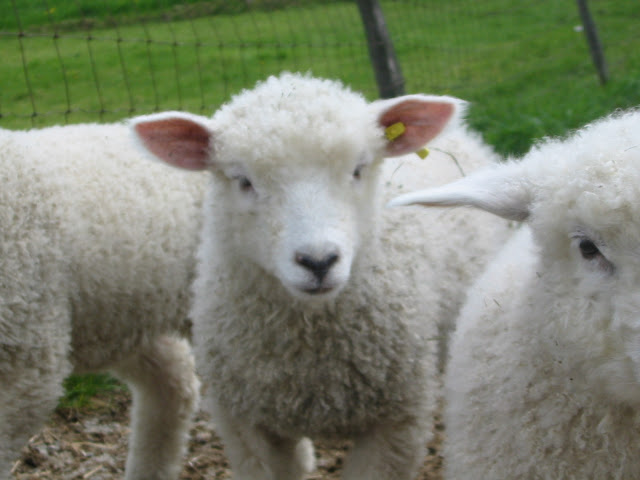 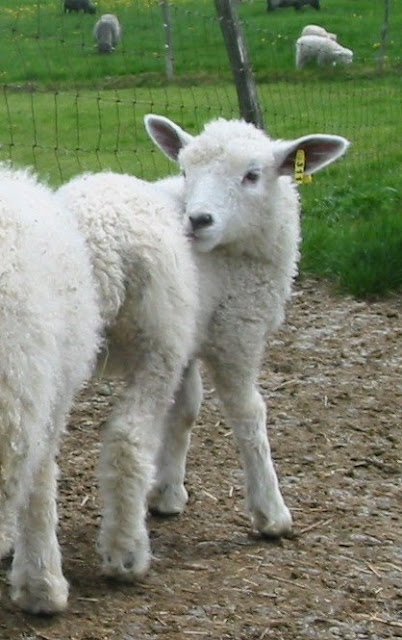 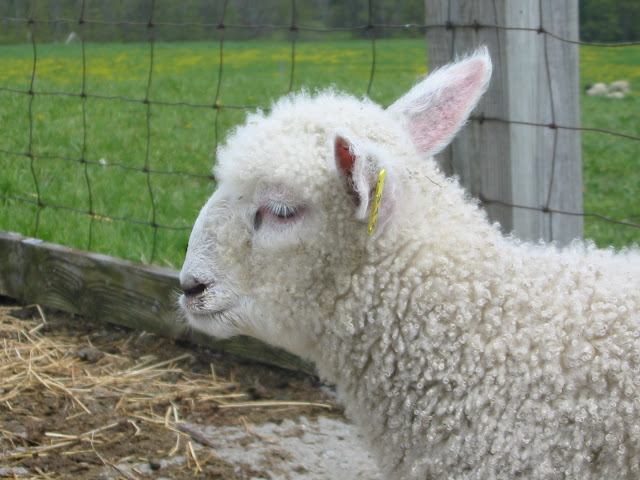 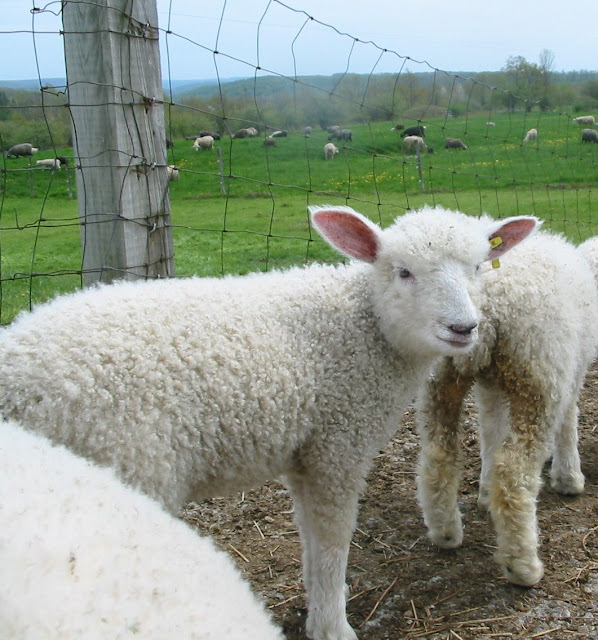 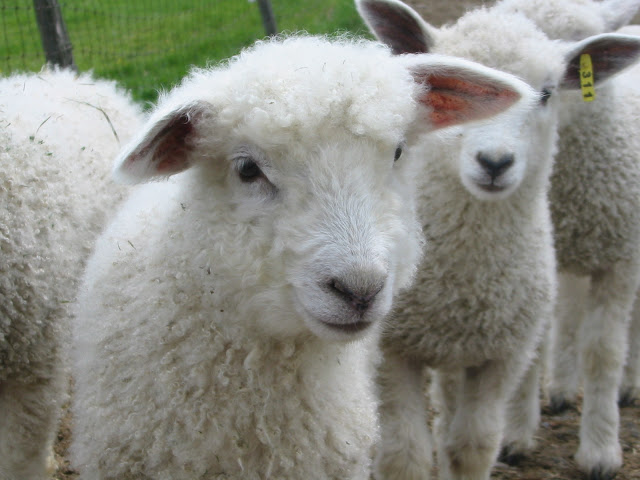 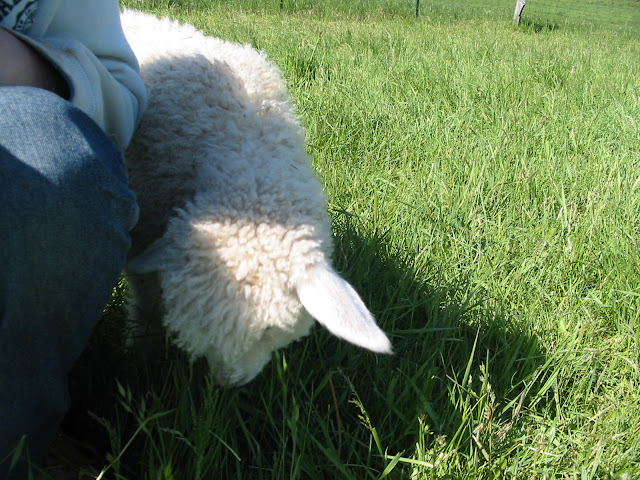 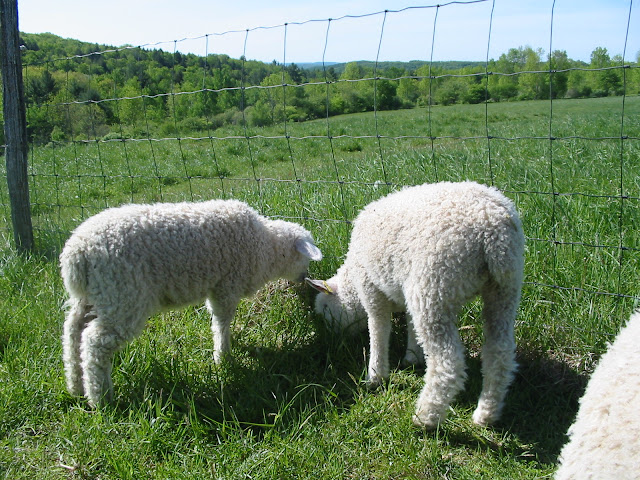 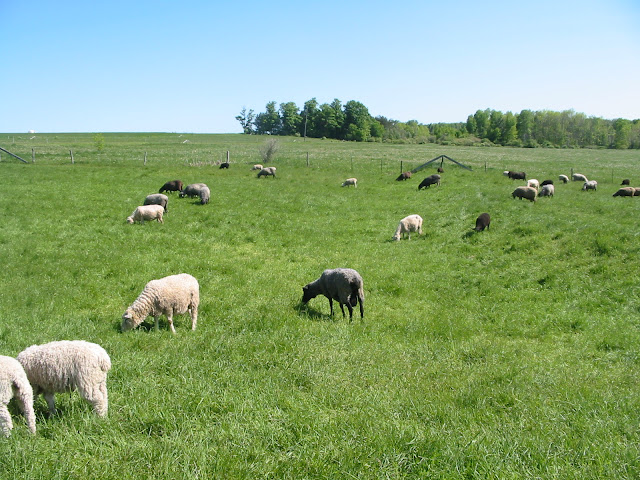 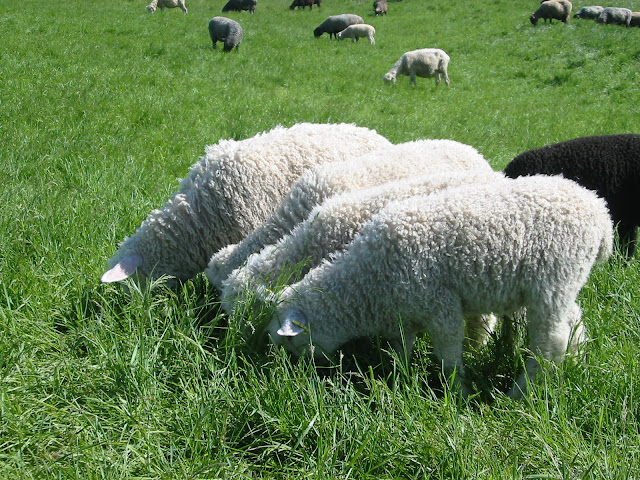 IF there weren't so much to do I really could have stayed out there in the sun all day.
Posted by Sheepmom at 9:06 PM 4 comments:

I've admired for some time the bags and purses that other fiber people have made by knitting something oversized and then deliberately felting it (fulling) to reduce size and increase fabric density.  Like so many other interesting things, I don't actually follow through and do them unless there is an additional reason.

This year our spinning guild held a group challenge called "Bag It!".  Back in November you were to provide 8 ounces of ready-to-spin fiber in a plain brown bag.  The bags were shuffled and handed out to all participants (with the organizers keeping track of whose was whose) who then were to make a bag or vessel by any method they chose and return the item to the original person.  I discovered some lovely Blue Faced Leicester wool dyed in dark shades of blue.  The spinning was quick and fun, but then the yarn sat for some time (*cough*April) until I found a pattern I liked thought I could handle.  (If you don't know of them already, hie thee to Ravelry and join, if only to take advantage of the pattern library.)

The Booga Bag looked pretty easy and I made a few changes  (more rows, more rounds) to make mine a bit bigger than I thought it would be if I strictly followed the pattern.  The pattern calls for you to make I-cord for the handle but making the bag bigger robbed me of sufficient yarn to do that.  Instead I built a small pocket into the inside of the bag and found some nice cording at JoAnn Fabrics to be handles.  And beads - I had to jazz it up with some silver and pearl beads.

I had pictures.  I really did, and it looked great.  Somehow I had a serious brain cramp and erased them to make room for something else.

The bag was ripped from the recipient's hands collected at the end of the meeting to be included in the guild's display of Bag It items at the September festival. The variety and excellent quality of all the items was amazing and inspiring.  I already put a few more patterns in my Favorites on Ravelry to try some day.   I'll be sure to get a picture of  my bag at the festival and post it here.  I do so few projects - I need to immortalize them in pictures!  Sigh.

....So this week is a letter challenge and anything that begins with the letter W will suffice. :-) 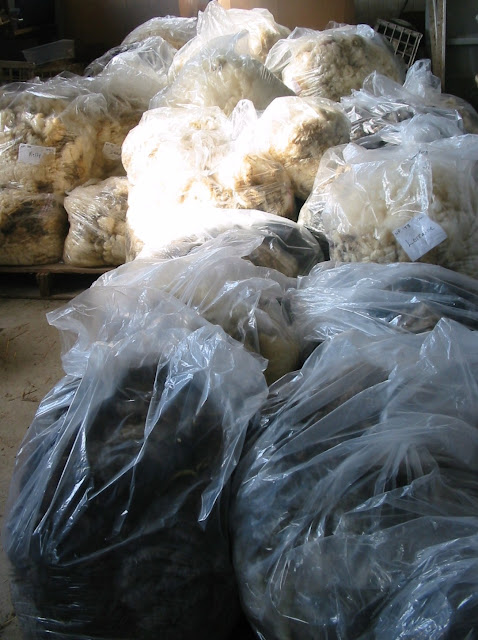 A small portion of the wool waiting for my attention.
Worn... 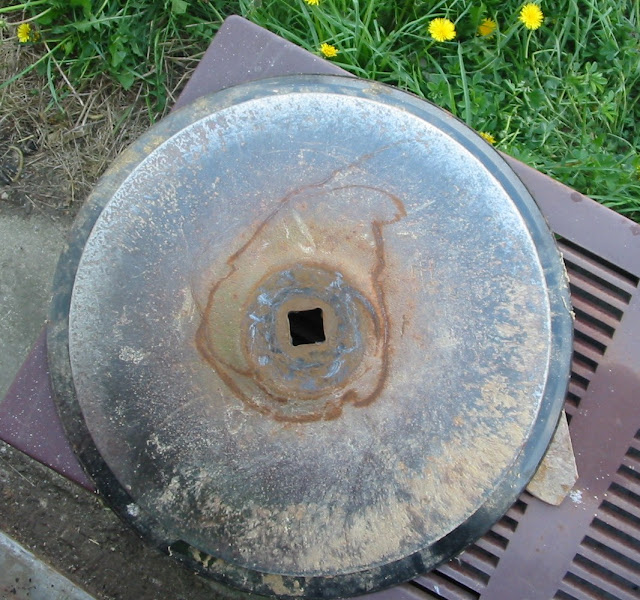 An old worn out disc resting on a new one.  The metal missing from the edge has been ground off  one molecule at a time grating over the rocks in our fields.
Work..... 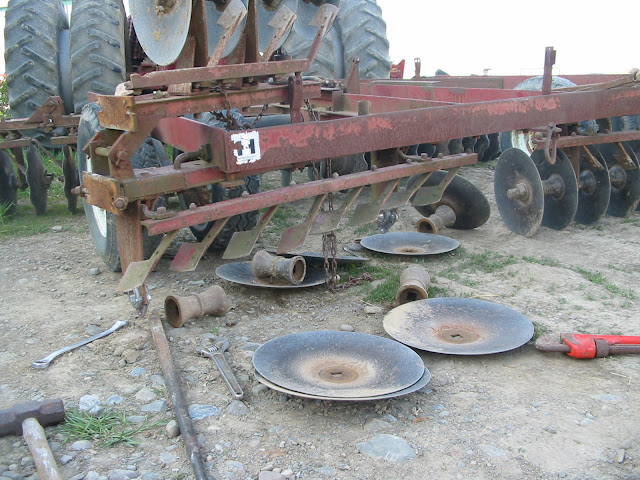 ﻿
Remove every disc and replace with a new one.  The shaft that runs though the centers and holds them in a row had snapped too, precipitating the sudden task.
Whew!
﻿
﻿
Posted by Sheepmom at 6:09 PM 5 comments:

This week's challenge is the color white.  They are predicting SNOW here tomorrow and tomorrow night which would have been a good challenge capture in a dreadful sort of way.... but since it's not here yet we'll go with 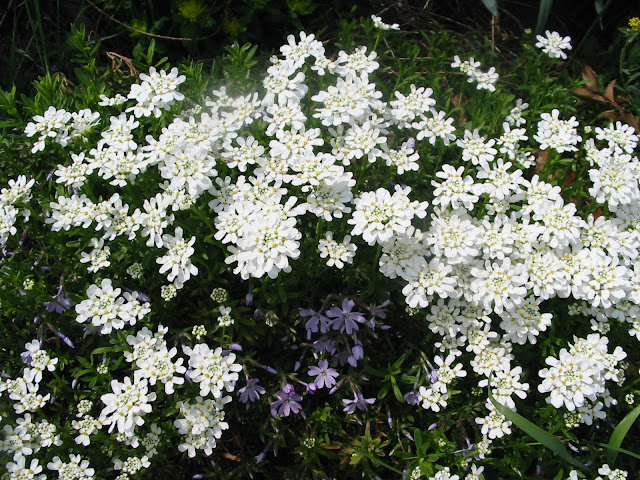 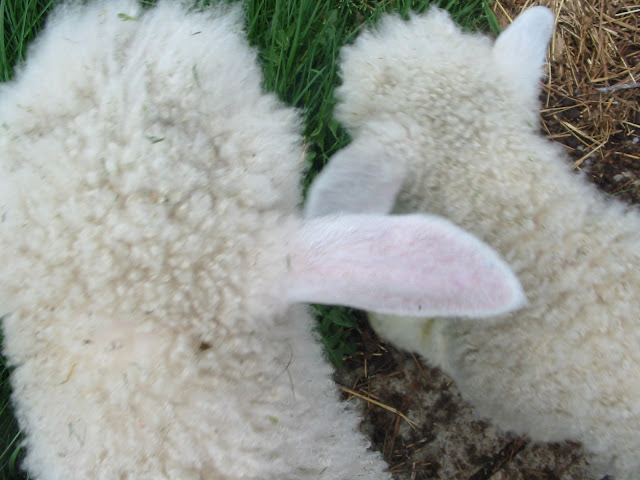 Lamb's Ears (the real kind, not the plant)
﻿
I really, really don't want to be editing this tomorrow to add snow......
Posted by Sheepmom at 9:05 AM 5 comments:

Spring has been a long time coming this year.  There were no teasing warm days in March or April.  We just hung on to winter and temps that couldn't crack 40 for weeks.  Things finally changed last week and we've had full sun and temps in the 70 range.  That brought on the pasture enough that we could start introducing the flock to green grass again after seven months of being on dry hay. 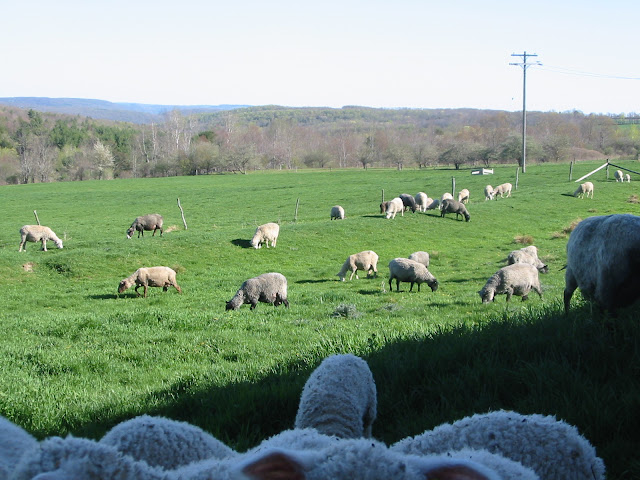 This is the small pasture directly adjacent to the barn yard we call the Baby Pasture.  It will only last a few days even though we only allow them a limited grazing period to help them acclimate to fresh forage.  Sheep have no self control and would eat themselves sick on this lovely stuff.

Of course the lambs have never been beyond the fence and everything gets thoroughly investigated.  Apparently, bare dirt is the best. stuff. ever. 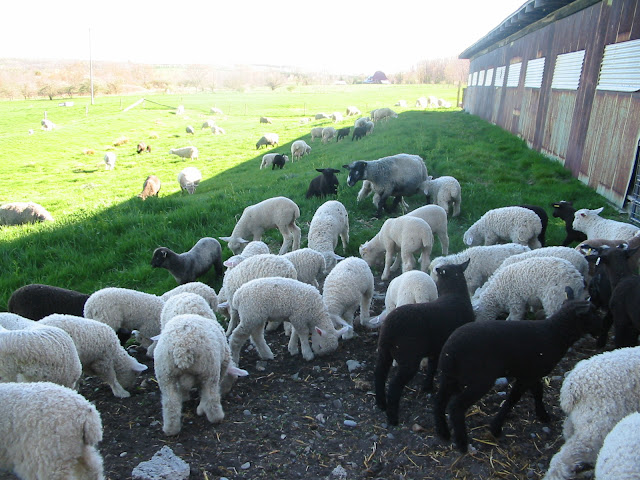 The ewes don't waste any time or energy - they just graze as fast as they can (although they do run to another spot if they think someone has something better than they do.) 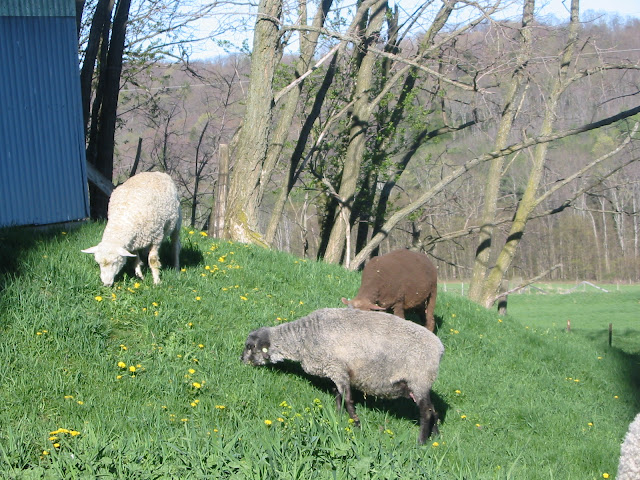 This is a dreadful picture of him, but this little guy has very cool moorit and white markings and is going to live in KY at Equinox Farm when he's weaned along with a companion or two. 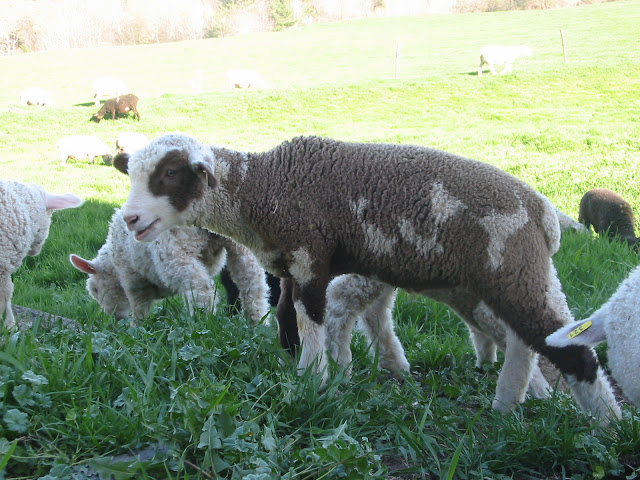 But these lambies have a few more weeks with mom before that happens.
﻿ 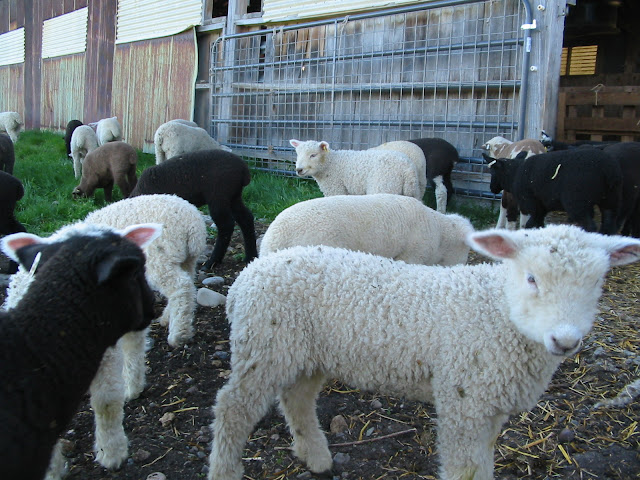 I'm sure the time will flash past like lightning.﻿
﻿
Posted by Sheepmom at 6:55 PM 4 comments: