Lambing season starts in about four weeks.  The bred ewes in the flock need to be shorn before any of that activity.  We usually try to watch the weather for a break in the cold but this winter it isn't happening.  It seems mean to shear an animal when it's this cold but they have fewer health problems from being a bit chilly than from being too hot and being rolled around when more heavily pregnant.  Plus, being ruminants sheep have a built in heat generating plant that keeps them warmer than we'd think.  Of course, if there were no shelter for them it would indeed be very cruel to shear now and they'd suffer mightily

Our shearer does a great job but can usually only handle 25-30 of our big girls in a session.  Yesterday we did the first batch and he managed 22 before having to quit for the day.  It doesn't help scheduling that he has his own flock so his chore time has to be taken into account.  Brian was intrumental in developing the STAR system of lambing and he just finished a big group in his flock and has some bummer lambs to tend to along with regular chores.

We did all Cotswolds this time.  They are big and heavy even when not pregnant.  We want to get them done first.  Between our good hay feeders and the fact that most of this group are friendly and like me to pick hay out of the wool on their backs fuss over them they have stayed pretty darn clean. 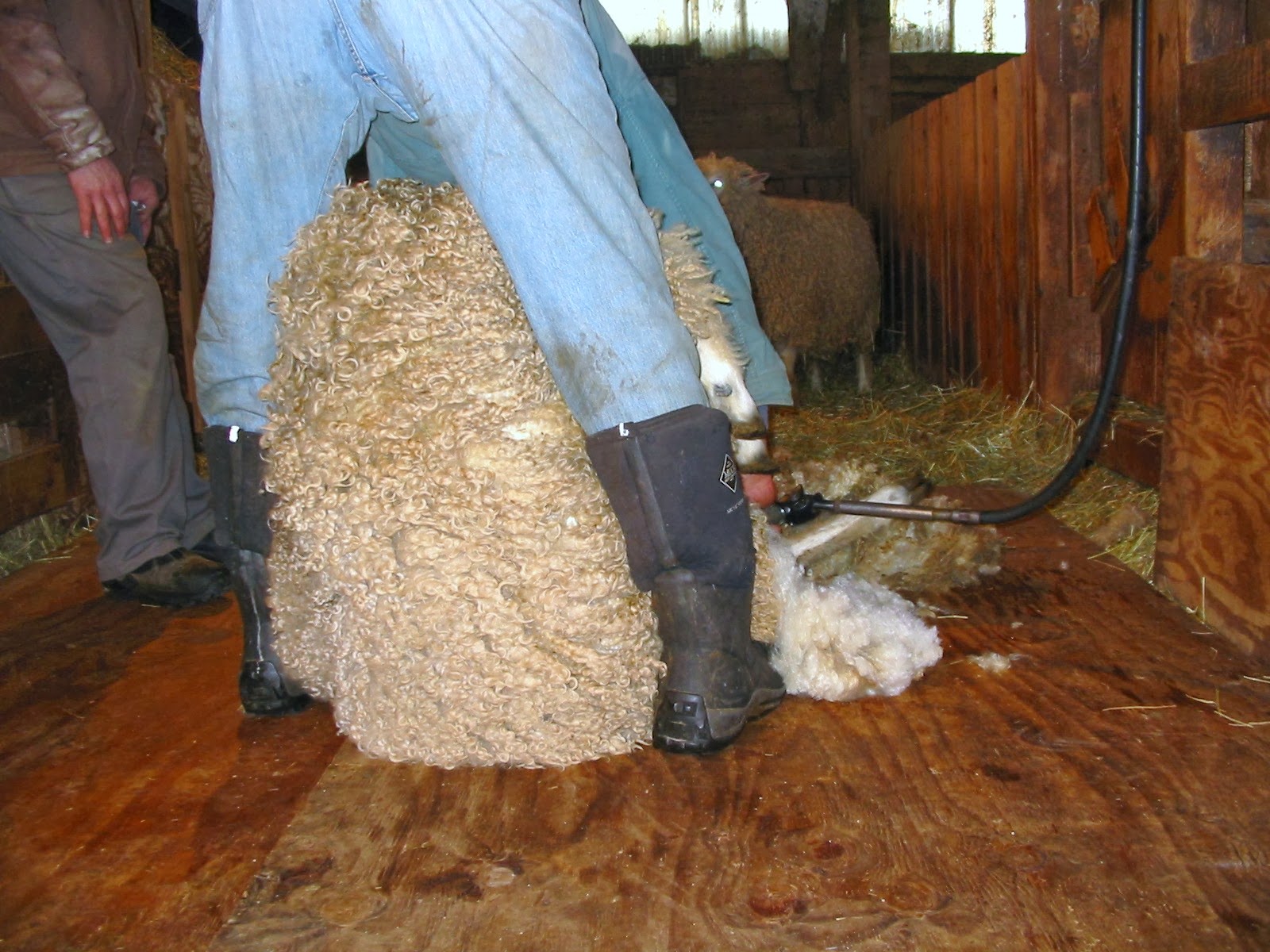 There's a lot of wool on one of these girls.  (She's not really yellow - it's the wonky light in the barn) 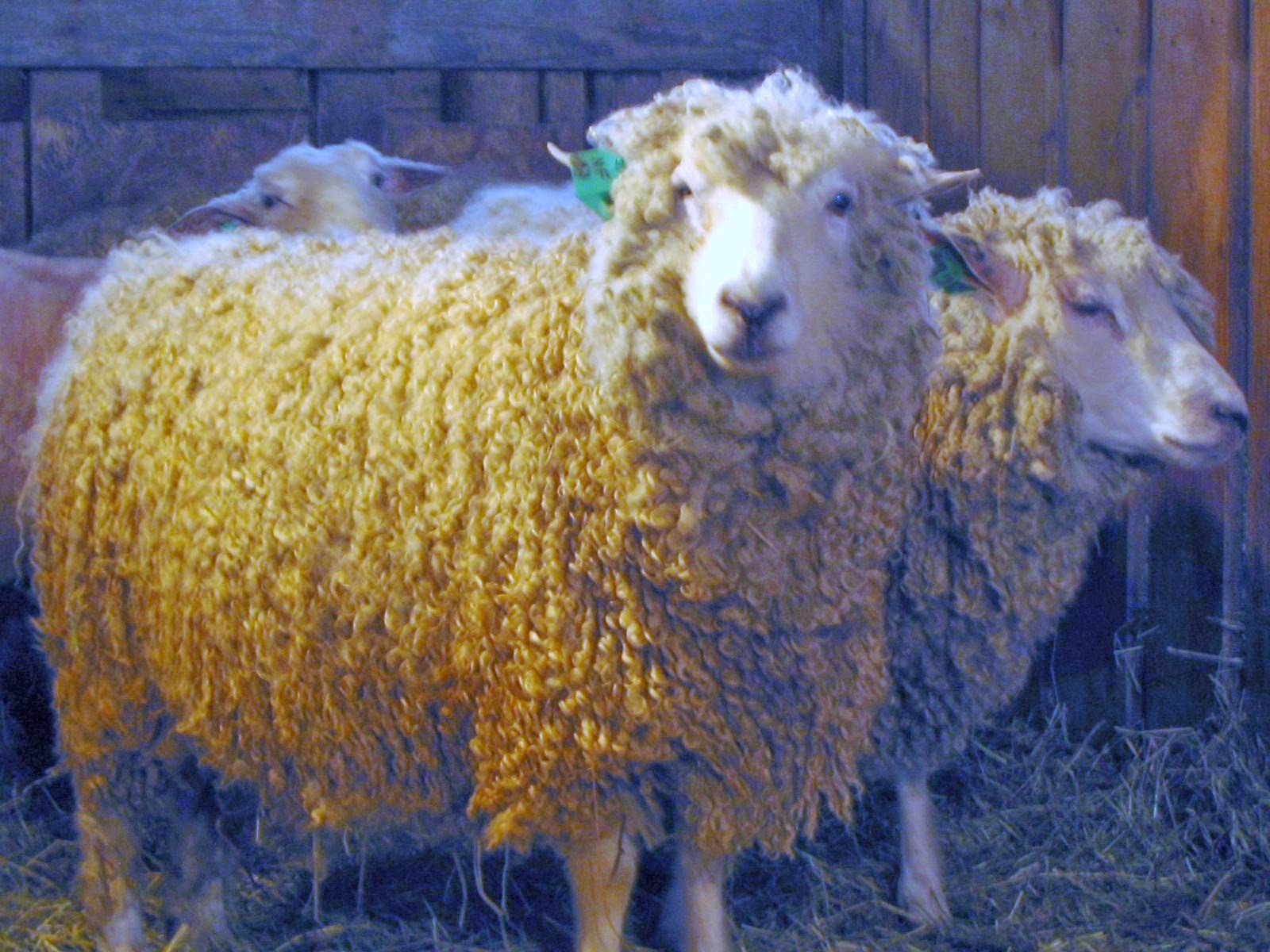 This one doesn't mind the process much at all.  Some are more of a challenge. 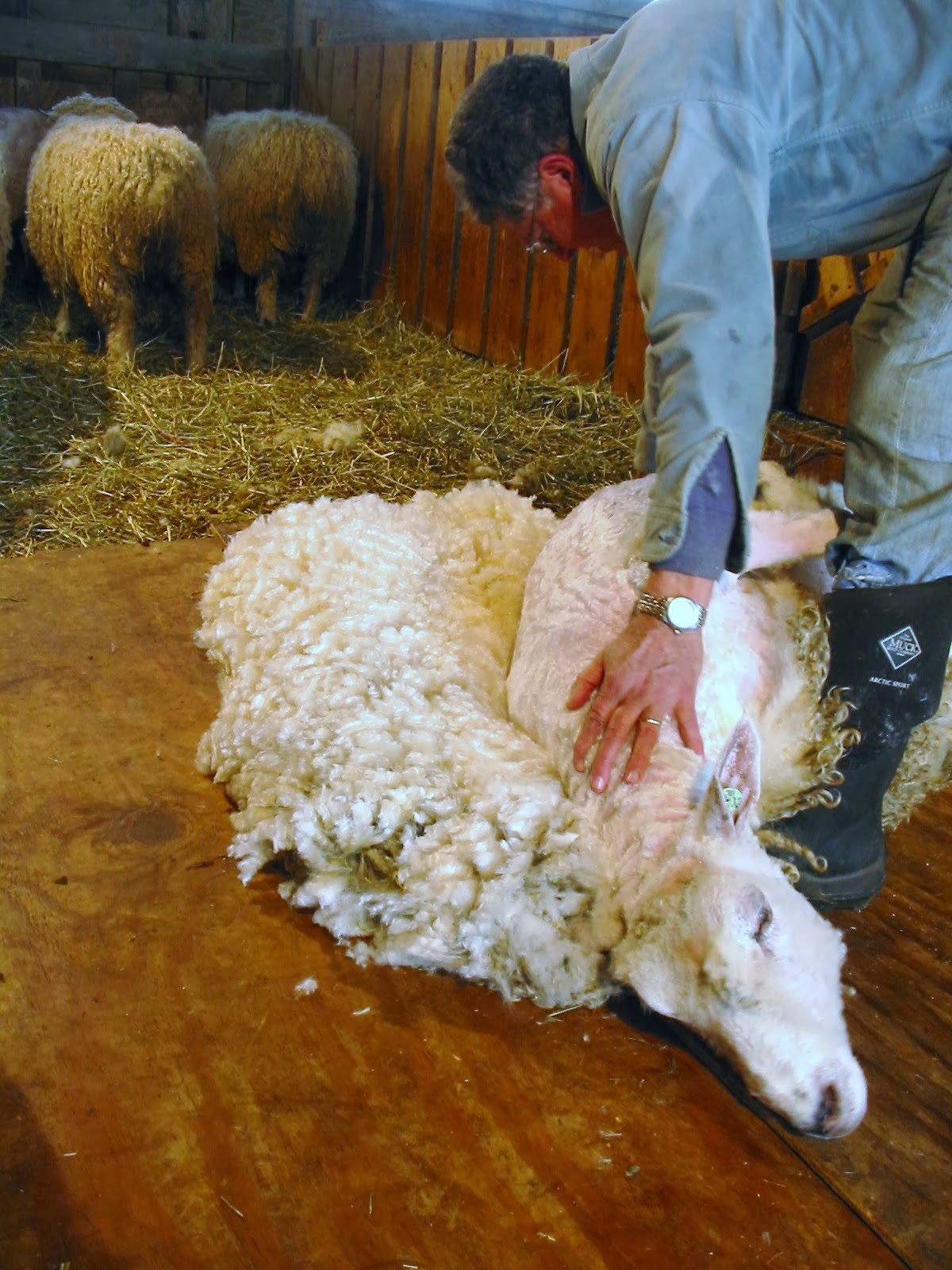 And they were much more comfortable afterwards. 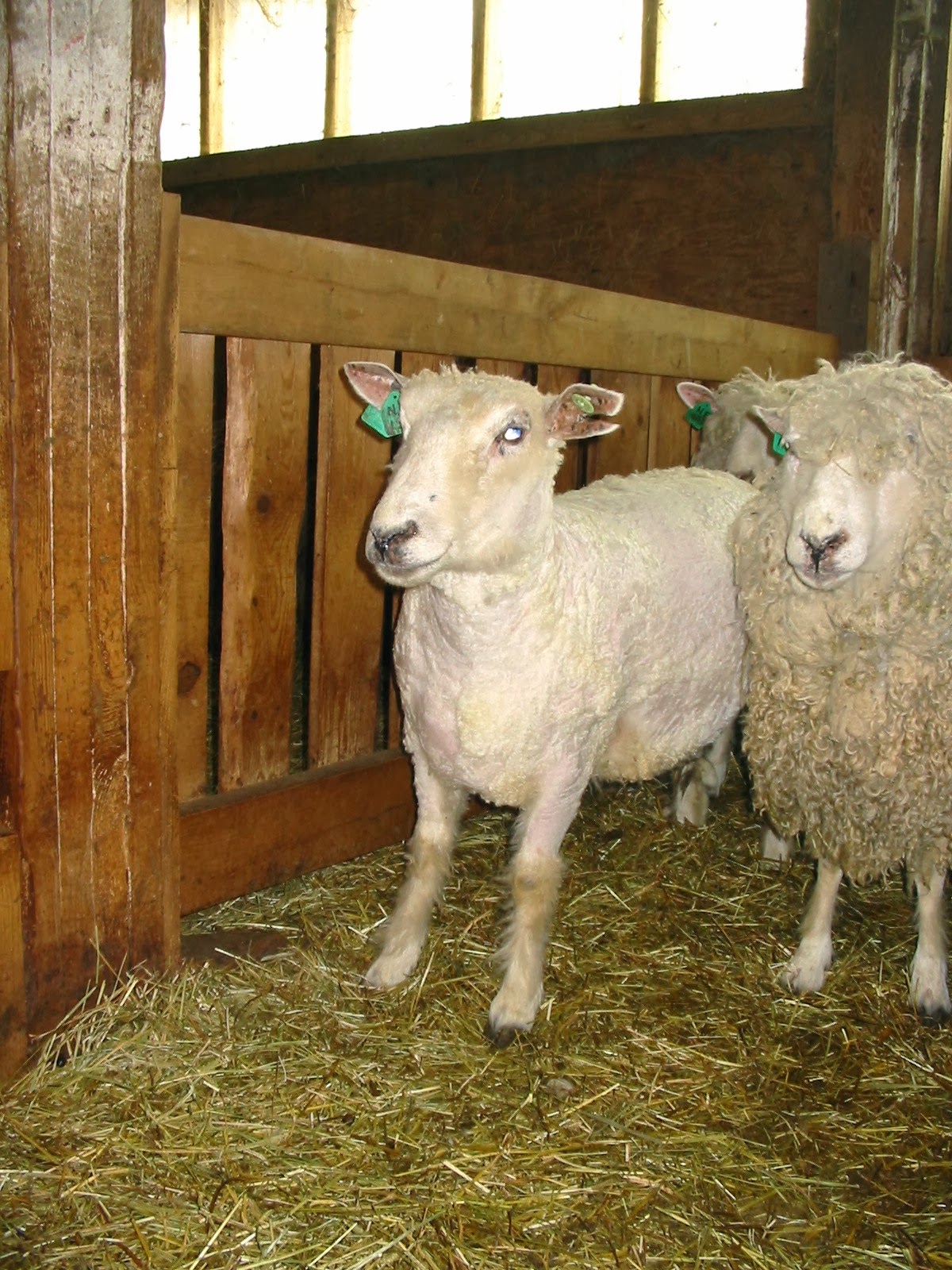 ﻿
We can roll the big doors closed and keep the barn shut up pretty well.  It's the worst thing to do most of the time - sheep are prone to respiratory problems when the air is humid and bedding pack is deep - but for a few days when it's below freezing it's OK.  Last night it was 3 degrees outside when we checked the barn at bedtime but 18 inside. It still sounds awfully cold to be naked but the sheep were all busily chowing down on some nice hay and nobody seemed uncomfortable.  This AM they were standing in a group chewing their cuds and looked pretty unconcerned.  You can see the bedding is all churned up where they dug down a bit to make a "nest" in the pack during the night. 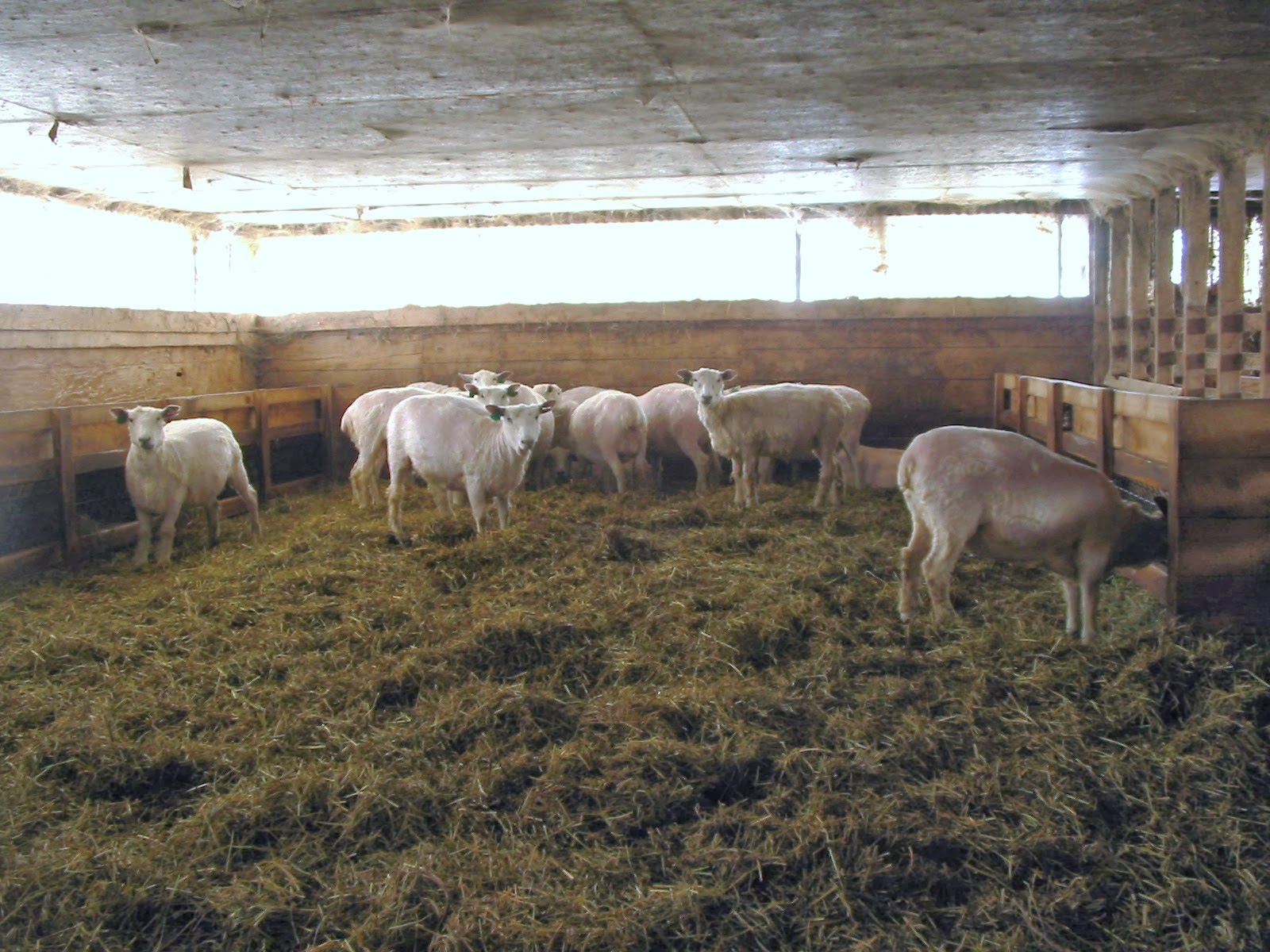 ﻿
After tending the ewes in the lower barn we trekked to the upper barn where the rams are housed. They won't be shorn till later this spring, probably after lambing.  That barn is harder to close up for protection from the cold and really there's no great need to get them done now so they can wait.  They are quite content to be inside.  This is the extent of someone's foray outside. 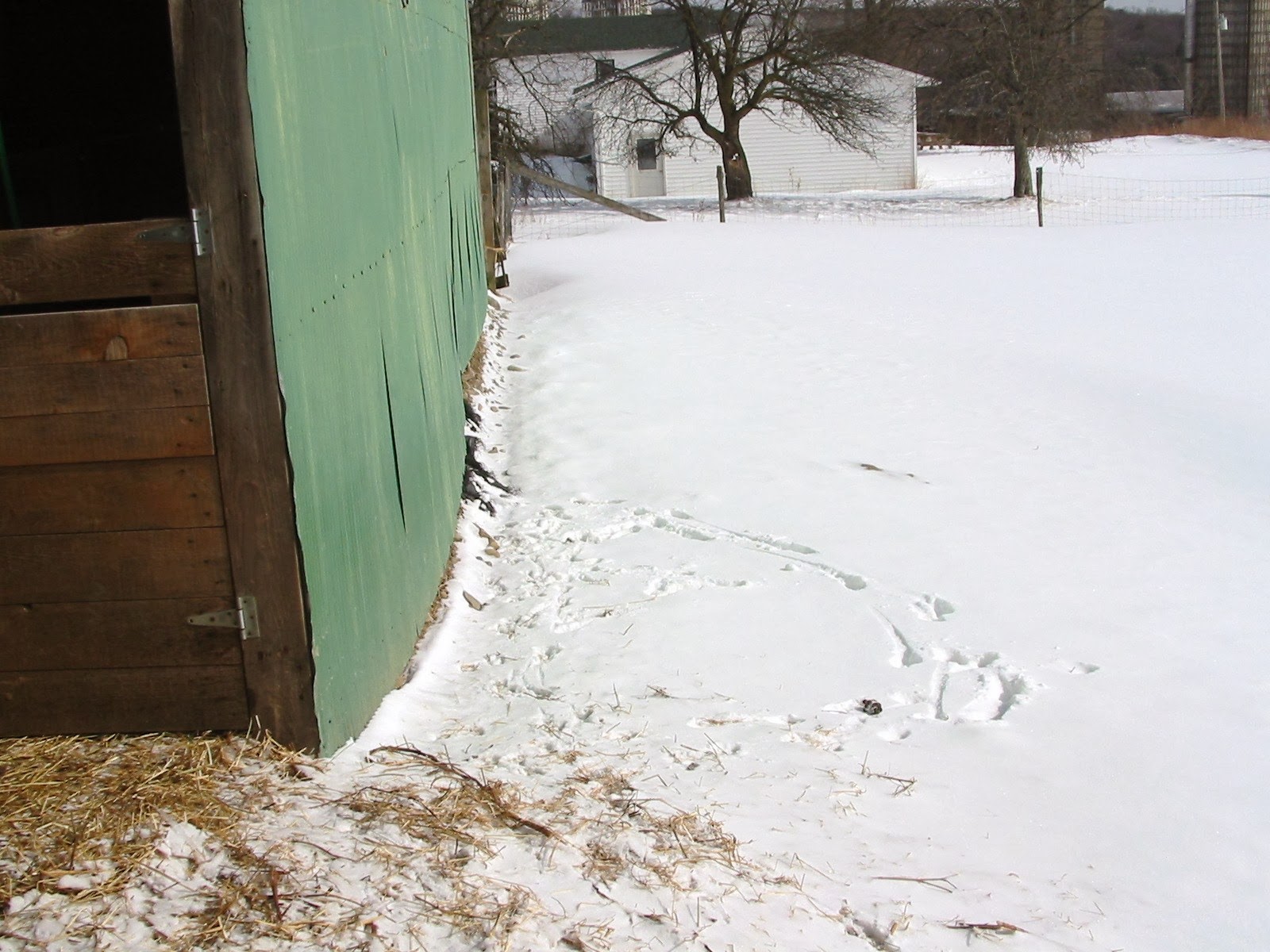 
Young Neville was very content to sit in the sun.  It wasn't giving any warmth but was cheerful.  I saw udders started on some of the ewes we had him with last fall so it looks like he managed his task. 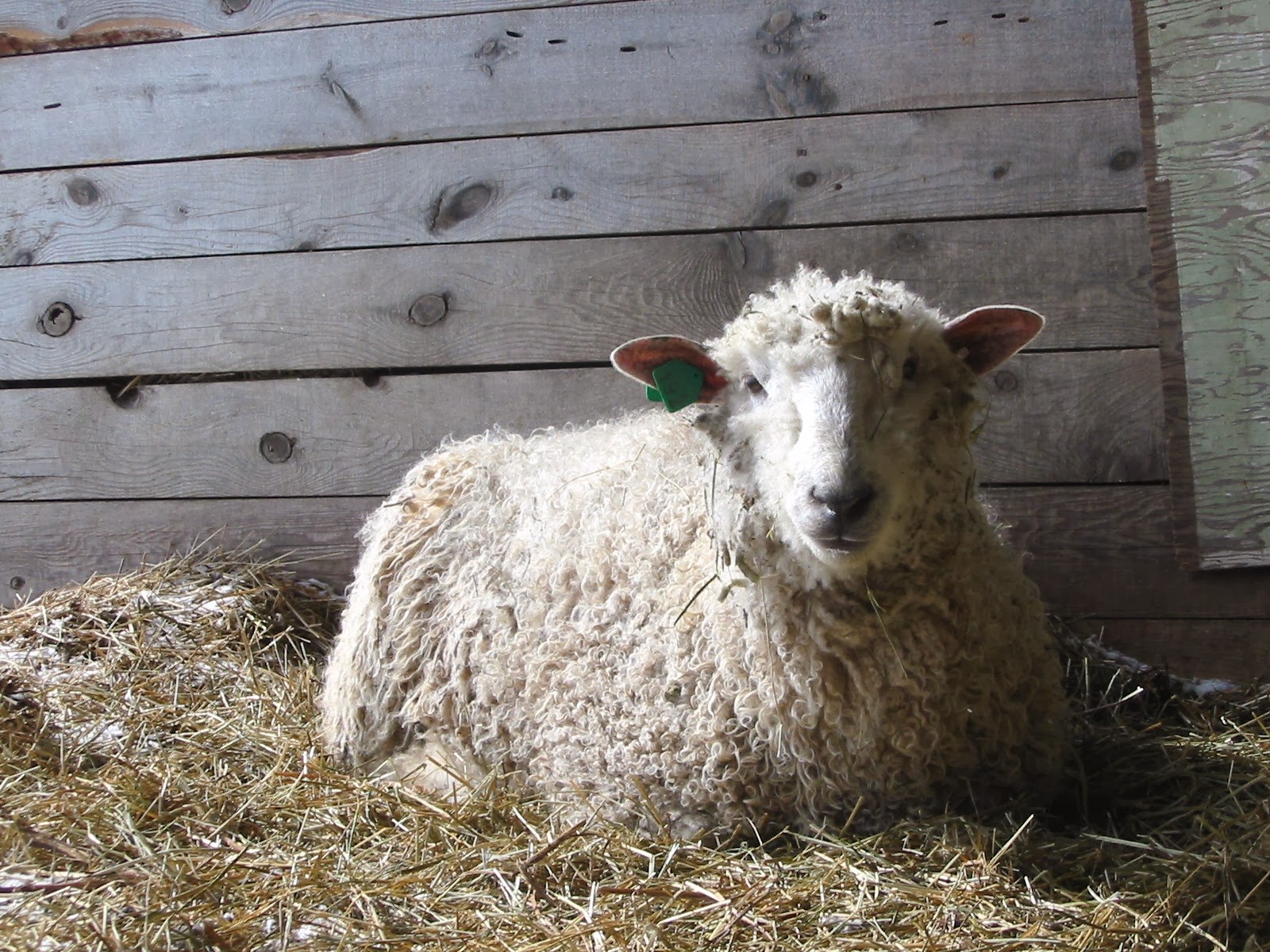 The next shearing date is this coming Tuesday.  The weather isn't predicted to be any warmer but it's reassuring to see the first batch of sheep handling the cold well. 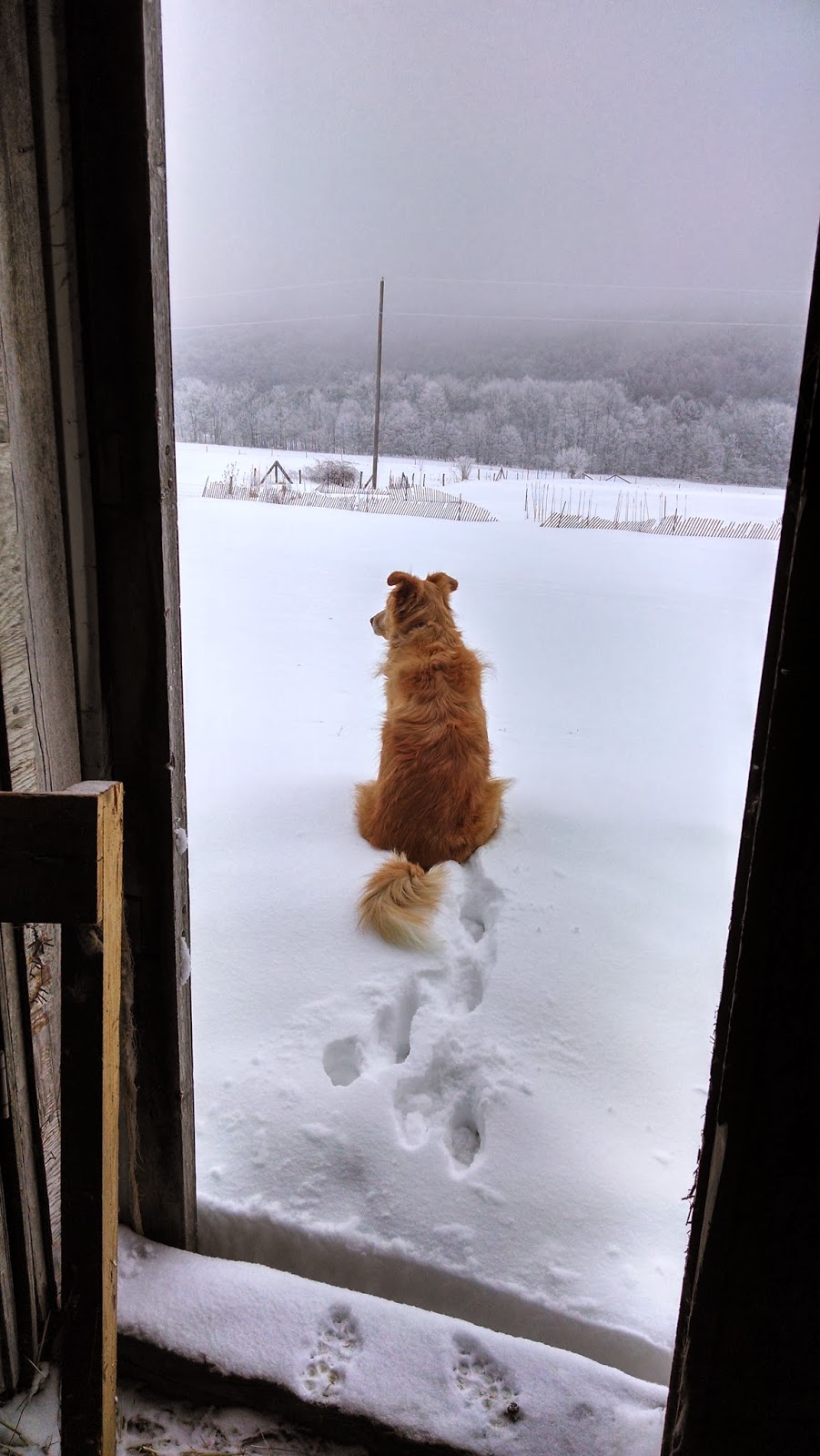 "I'm going to sit right here and watch for spring, Mom."
Thanks, Holly.  Let me know the second you see it.﻿
Posted by Sheepmom at 8:12 PM 3 comments:

A Warm Bright Spot in the Cold Dark Winter

This winter has just seemed endless and I've been in the doldrums worse than usual.  Busy and working on fiber and things when there is free time but just slogging though the basics takes the bulk of the day it seems.

We lost old Danielle in early February. She had yet another TIA type episode and deteriorated through that night into severe respiratory distress so she was euthanized early the following morning.  She almost made it to 11 years.  We have a few other oldies who are hanging in there but winter is pretty hard on old animals even when they have good food and shelter.

Natasha was not handling the cold at all well, particularly the multiple days below 0 so I moved her to the wool shop.  She's thrilled and wonders why she didn't know about this place years ago.  She took right to the kitty pan although she had never seen one before and doesn't even look at the door.

The dyed Cotswold I most recently sent to Acorn Works returned and looks great!  It practically spins itself and makes yarn that reminds me so much of a flannel shirt that I just had to name it.........

"Lumberjack"
We've gone through the flock and given all the bred ewes their booster vaccinations so they have time to put lots of antibodies into their colostrum.  We've ground corn, hauled hay to the lower barn and Andy's begun the arduous task of cleaning out the barns.  We normally do this earlier in the winter but the below zero temps were mighty discouraging to that sort of work.  He can't reach the field he wants to spread on nor does he want to take the time to spread each load so he's stockpiling the dirty bedding for later.  The material from the lower barn can be stashed in the unoccupied feed bunk but the ram barn litter has to sit outside for a while.  We're jokingly calling it Mount Crap-sta.
But the very best part of the whole winter was last weekend when our KY family Sara and Tim came to adopt Burrnie!  He is going to live at Equinox Farm and be a permanent resident of Punkin's Patch.
Lucky, lucky lamb.  He went in style Sunday morning.  Travel accomodations looked so cozy I wanted to go too.  (Well, I wanted to go anyway!) 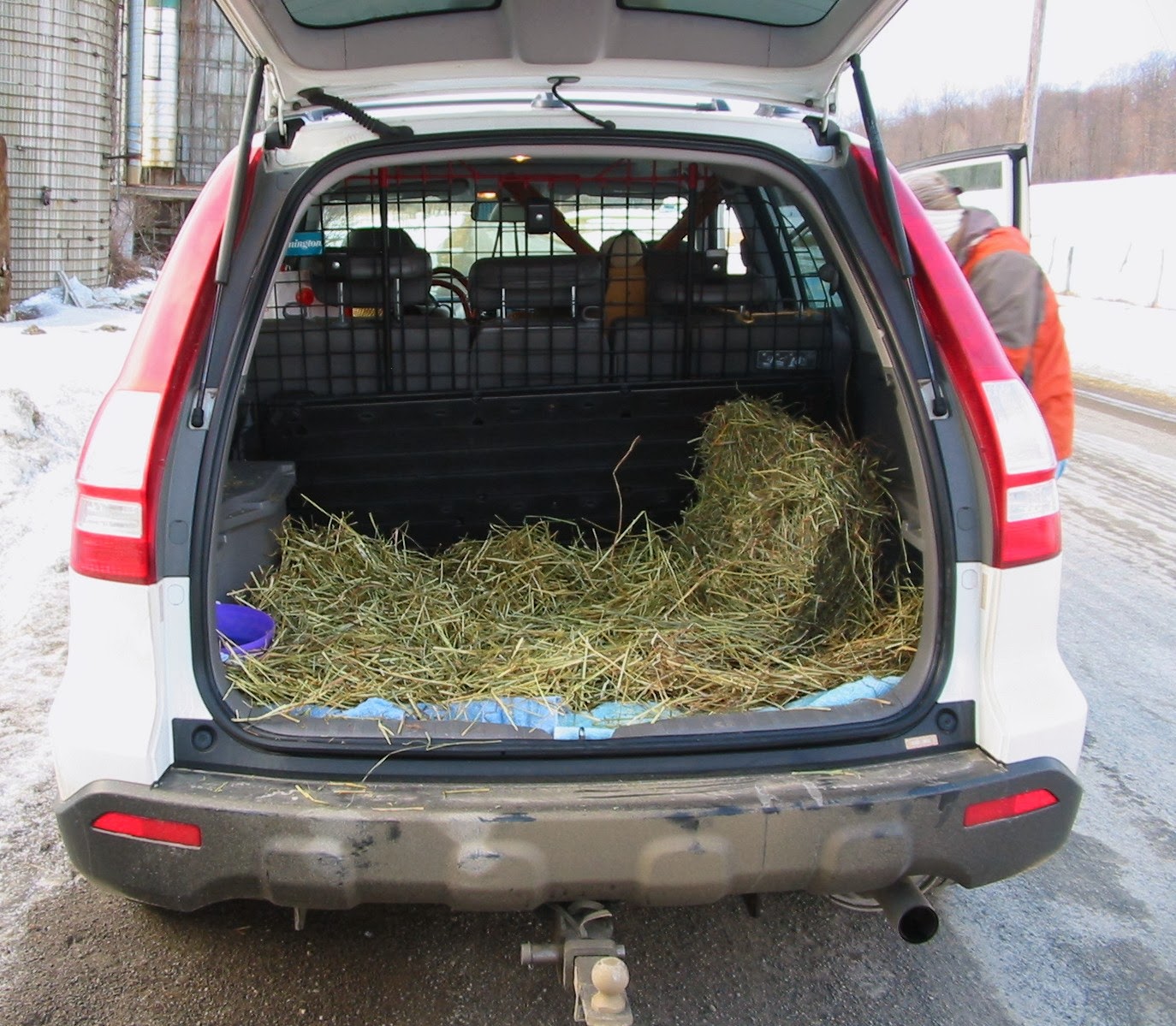 He rode like a trooper, ate and looked out the window and didn't lay down until they were almost back home! 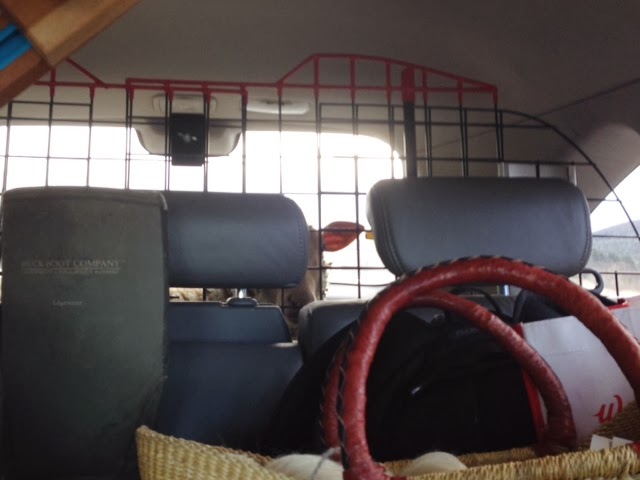 Talk about rags to riches!  Yay Burrnie!!
Posted by Sheepmom at 3:25 PM 5 comments:

"Ever since prehistoric times humans love to draw on walls, buildings, ect.... I'm pretty sure ya'll have some cool pics on this subject..:-)  "

This is a fun challenge and I was glad to know just what to capture.  This neat mural is on the side of a building in Naples, NY right across from a tackle shop.  It's quite large as one can tell from the windows in the building.  It faces a very small public park/sitting area.  Right now in winter it looks like a peek into a warmer climate which certainly cheers me up.   I'm not sure how it came to be but I enjoy it every time I roll through town. 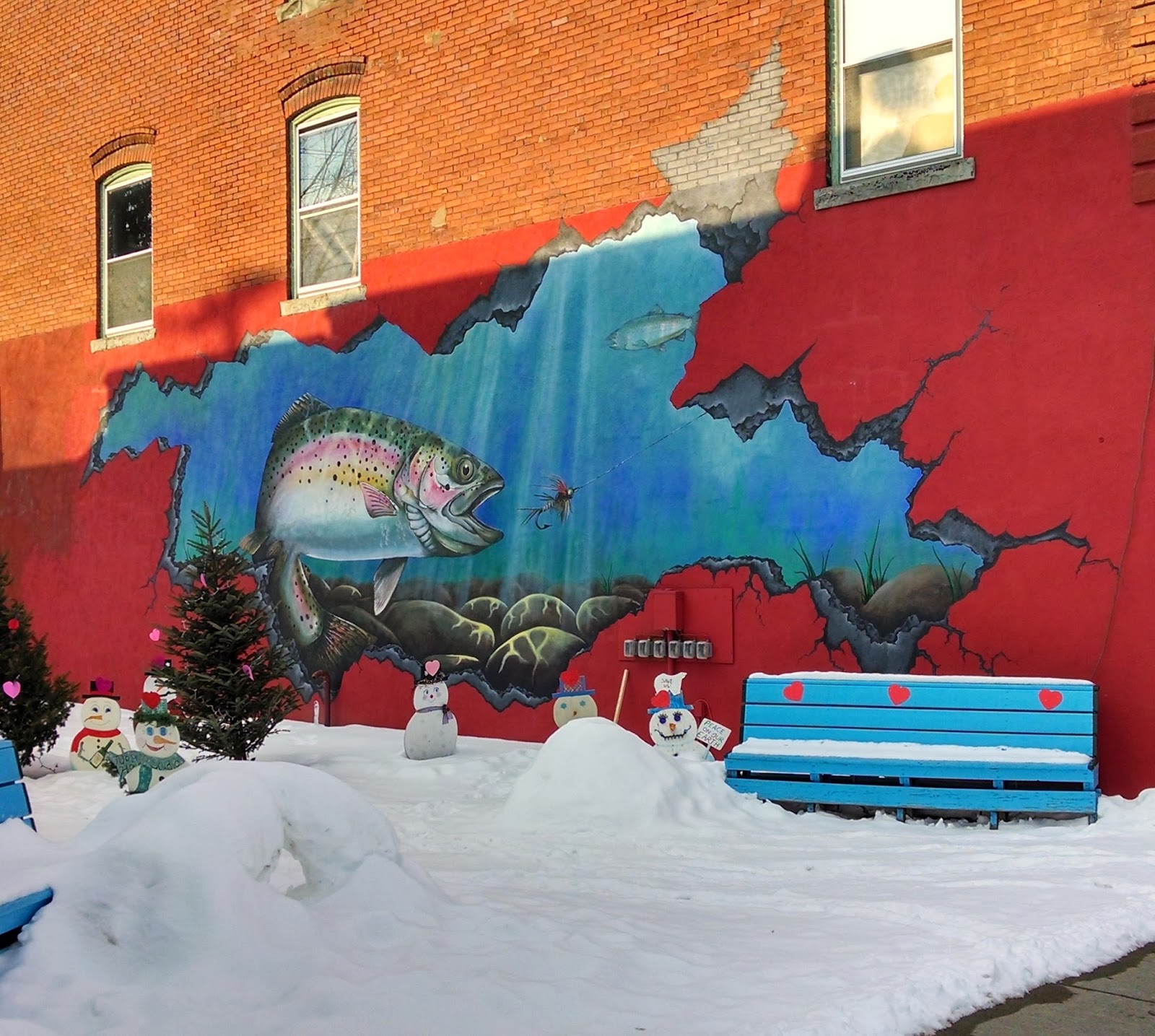