The One We've Been Looking For

Based on the date we removed the rams from the breeding groups our last possible lambing date would have been April 26.  India made us wait all the way to the afternoon of the 25th to finish our lambing season.  This tall ewe lamb weighed 15.5 lbs.   One is enough when they're that size. 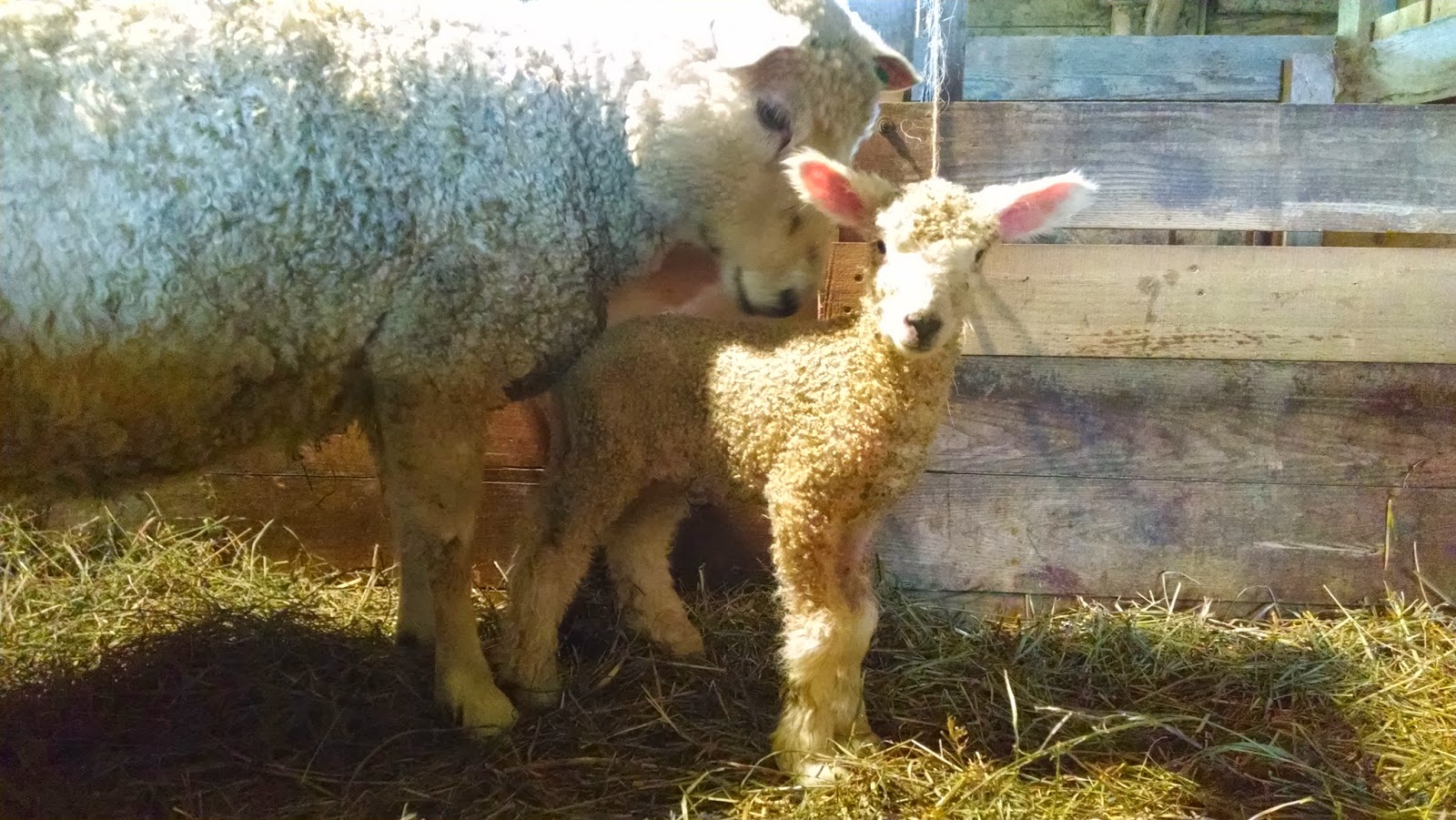 The last lamb prior to that was born April 12 so she will be on a schedule all her own when it comes to vaccinations and such.  For right now she just has to concentrate on growing. 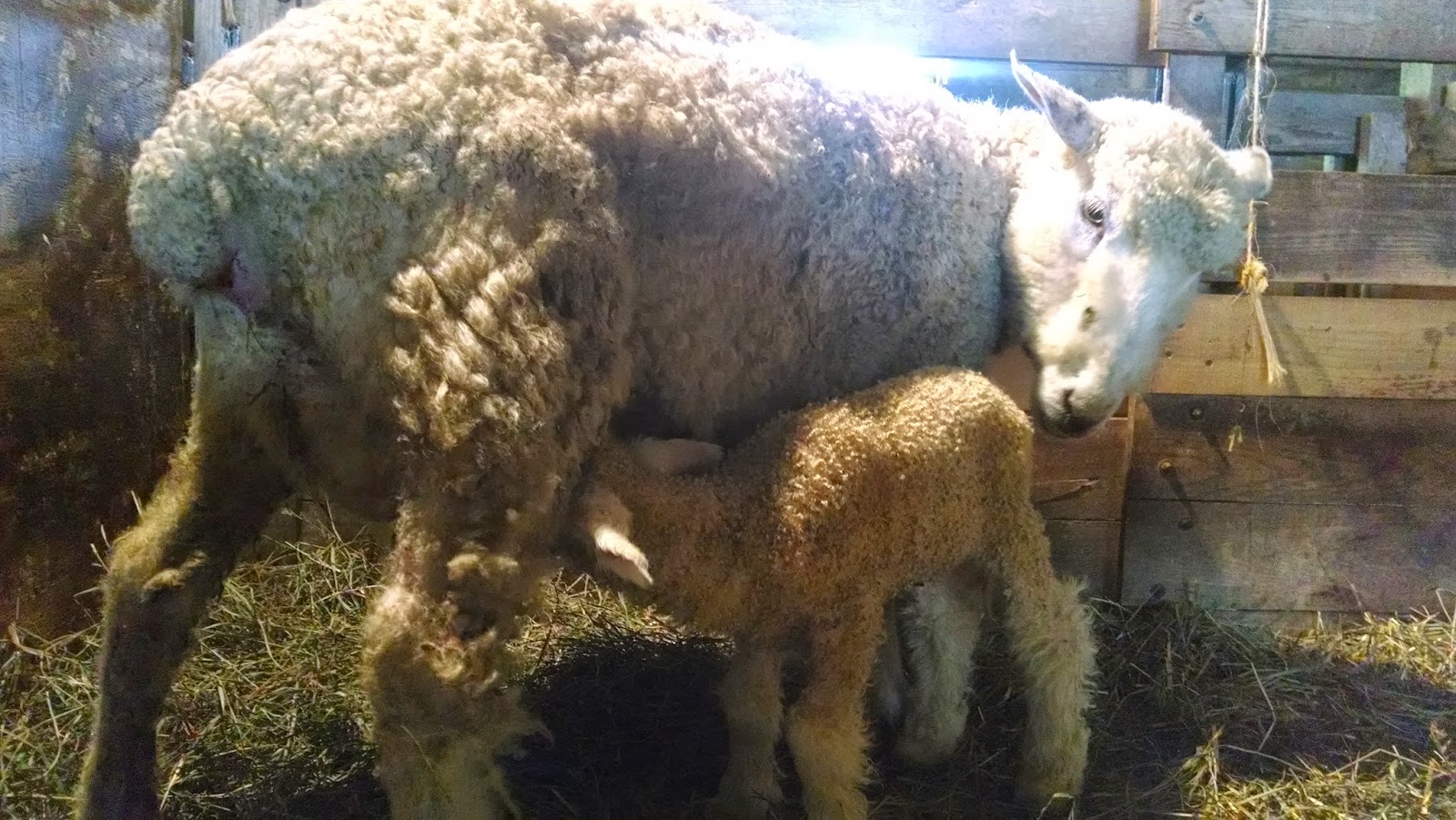 The rest of the lambs are eating nice alfalfa hay from the feeders with the adults.  Pretty soon we'll put up the creep gate so they can have their own space and eat all they want in an unhurried manner.  There is enough feeder space that no one is left out, but the ewes aren't generous and will push lambs aside with their heads to get the "best" hay.  They do need good nutrition now as they are milking their heaviest at this point.  Notice the milk froth fangs on this guy who must have just had a good snack. 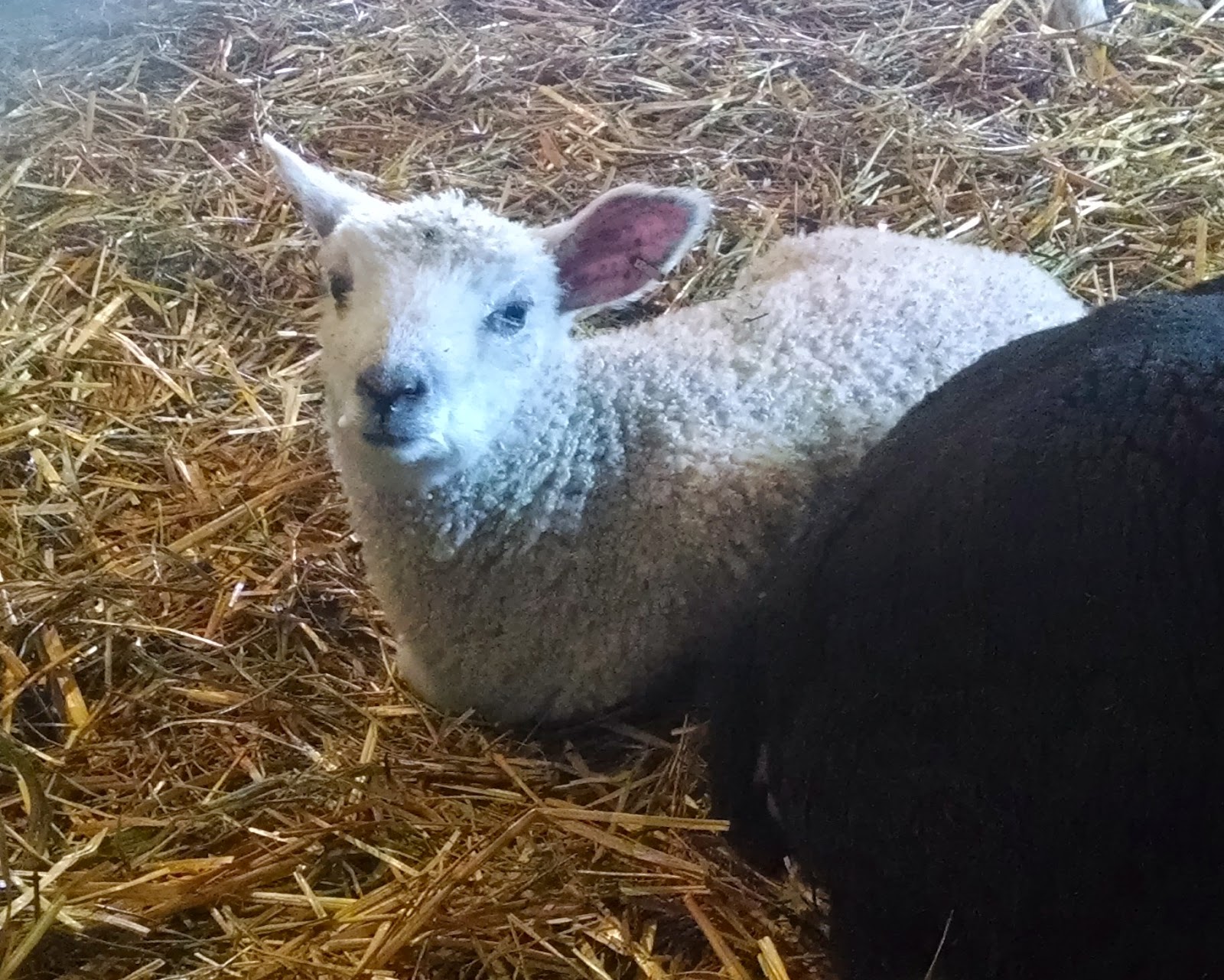 Quite a few of the lambs are starting to chew a cud already.  But when they aren't playing or eating they spend a lot of time sleeping.  I like these siblings cuddling together. 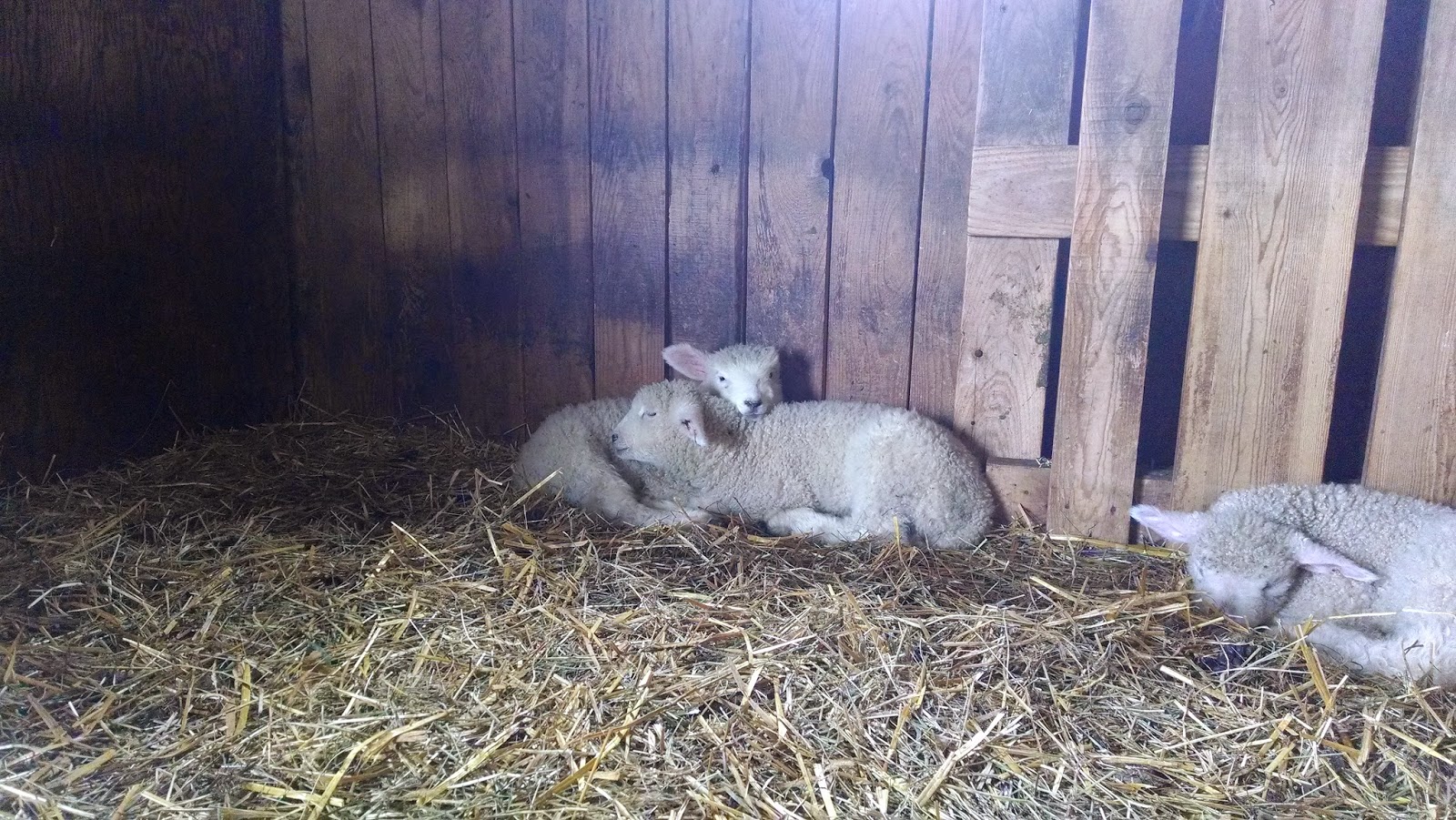 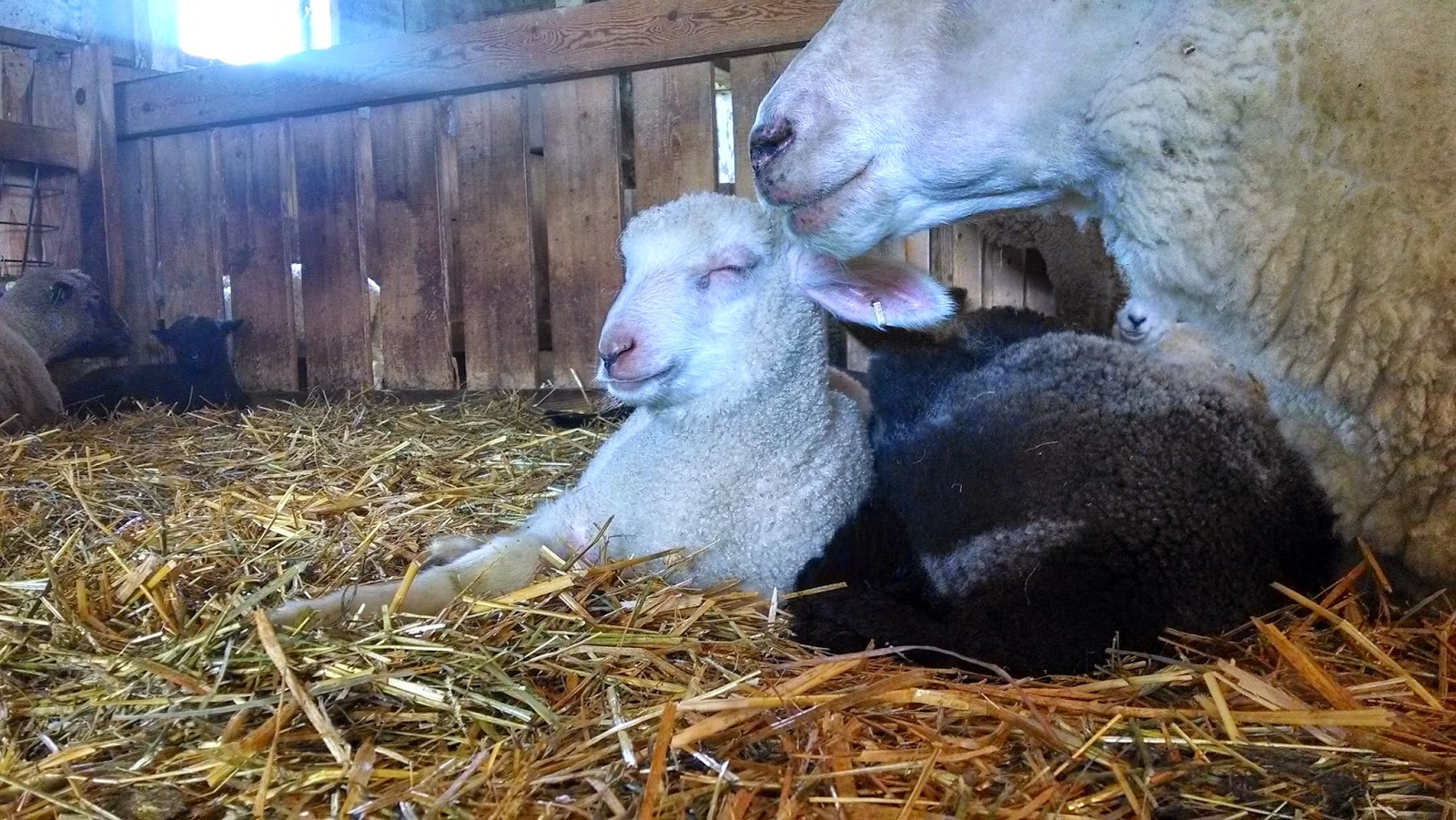 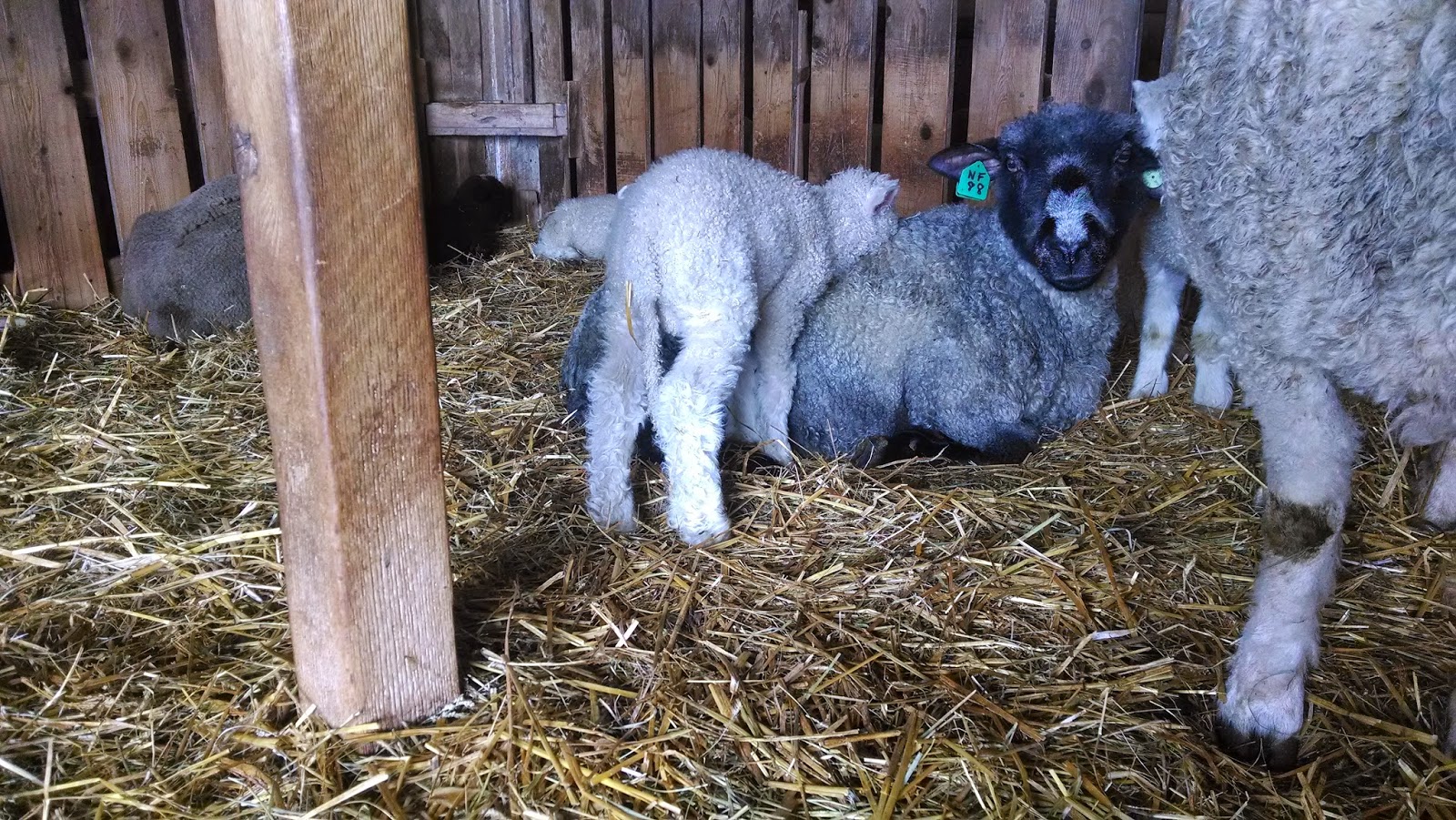 On mom but NOT sleeping. 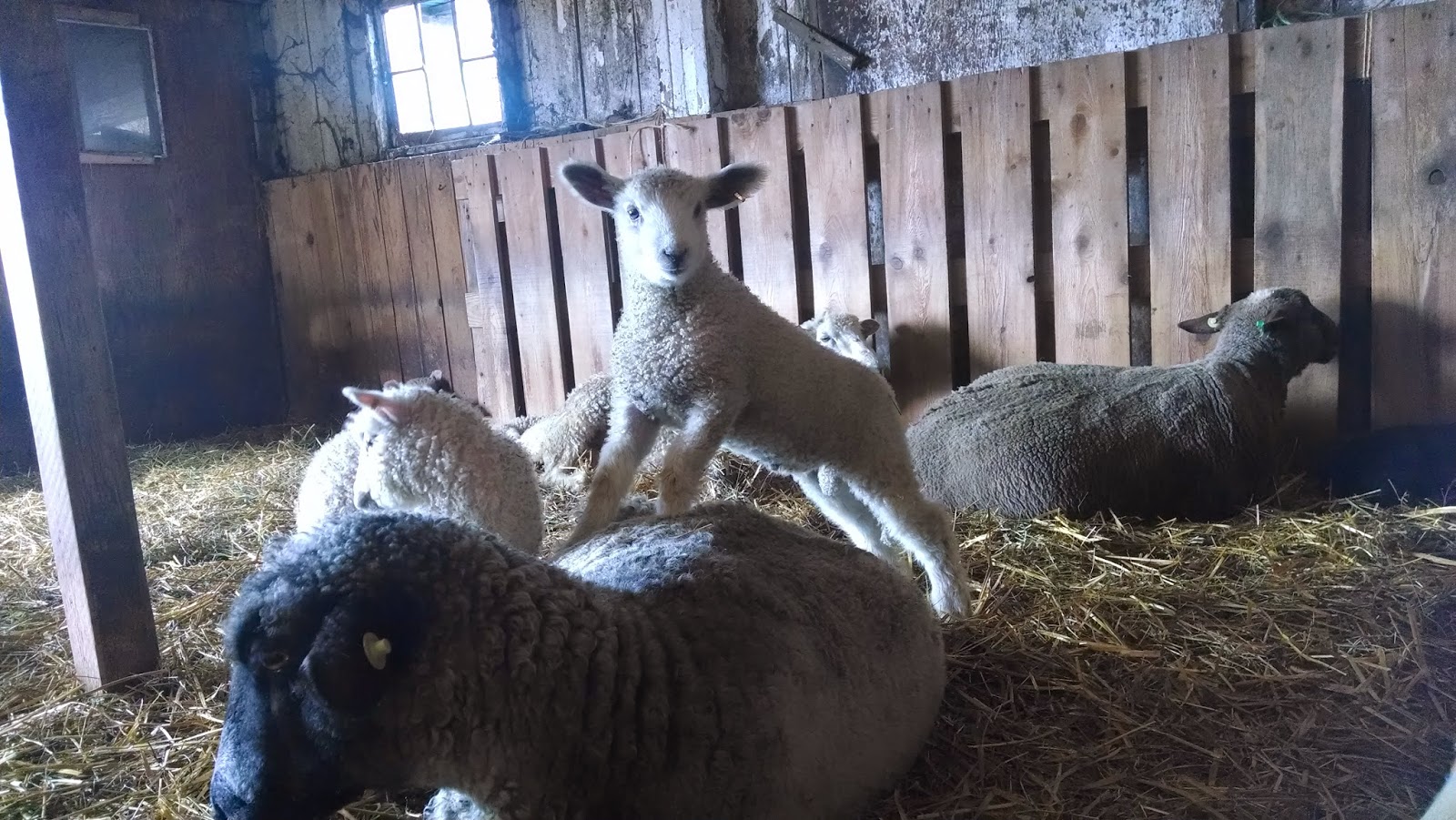 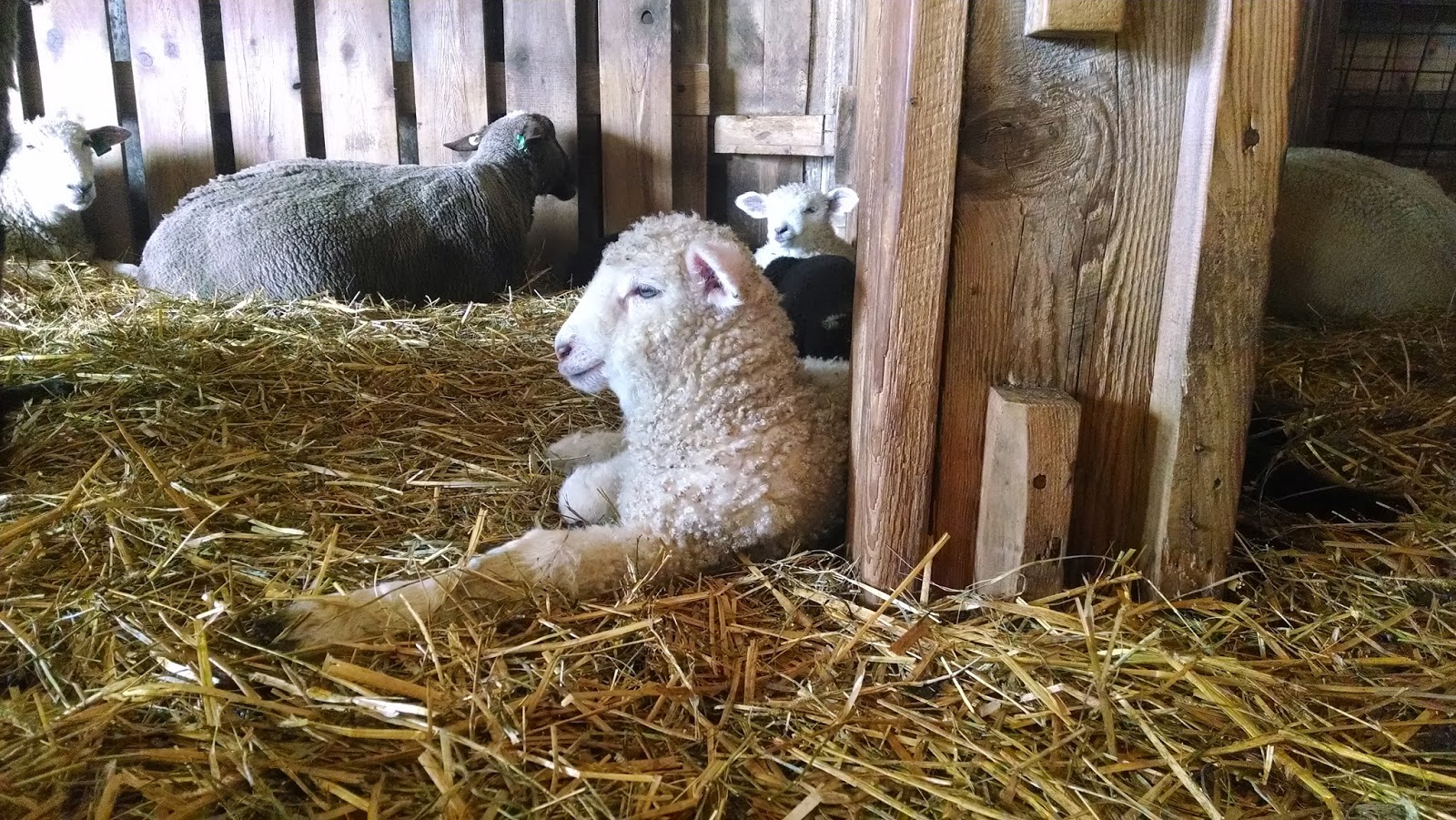 This one's thinking I've got a lot of nerve disturbing his nap. 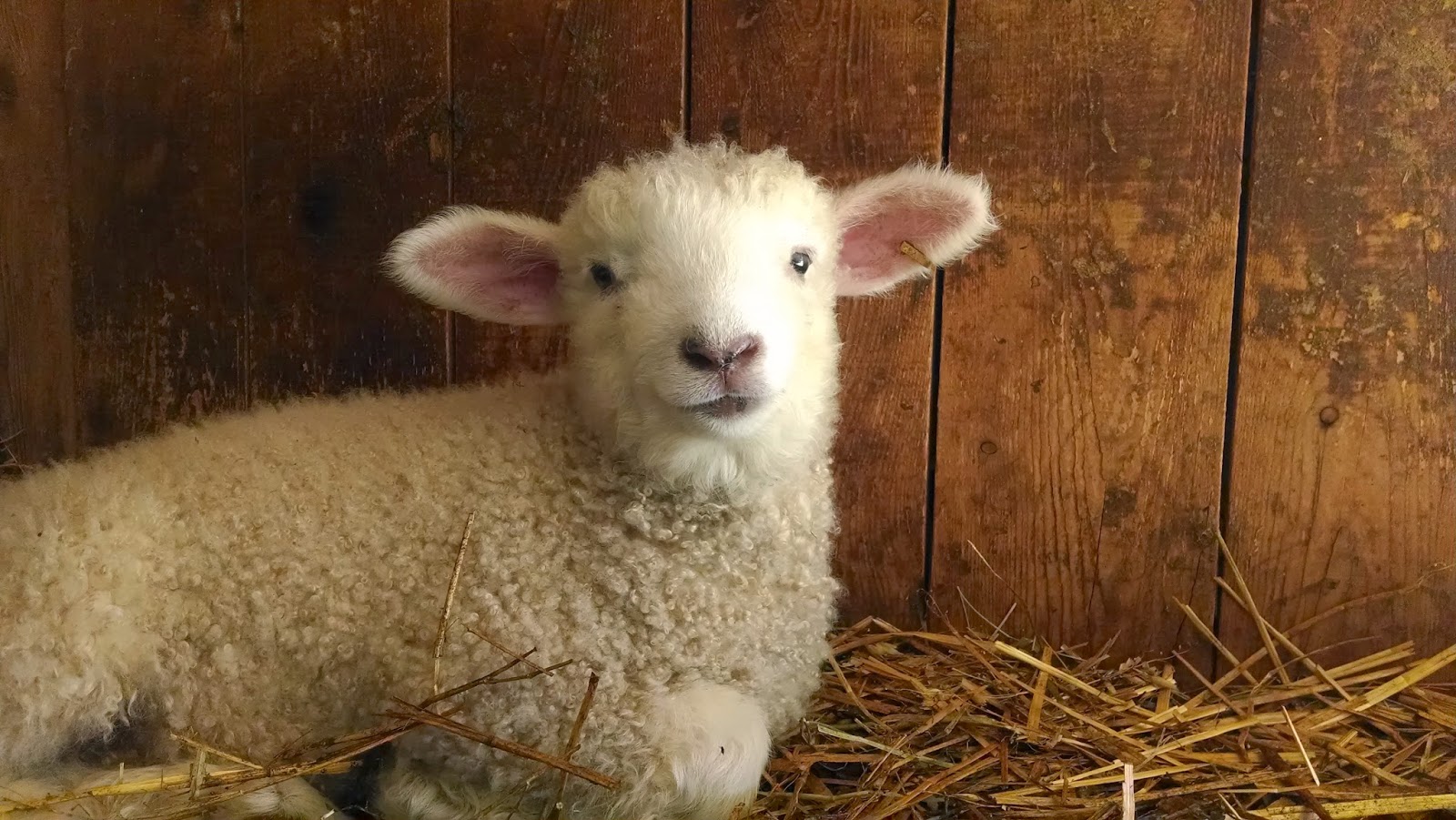 All in all it's been a pretty good lambing.  Much better than last year, that's for sure.  Of 55 ewes in breeding groups 51 were settled. We had 85 lambs born alive.  One ewe lost twins - one fetus had expired for some reason and when it was expelled the other twin went with it and was stillborn as it was quite premature.  Another ewe had a stillborn lamb - dead several days - but the twin to it was hale and hearty so that was a nice surprise.  There are 40 ewe lambs and 45 ram lambs, so a nearly even split.  Of those 55 are white and the other 30 are black, spotted or black mottled with gray.  No losses so far.  ( I have to add that caveat to avoid a jinx.  That's the way it works.)

We have had a close call with this little tyke. 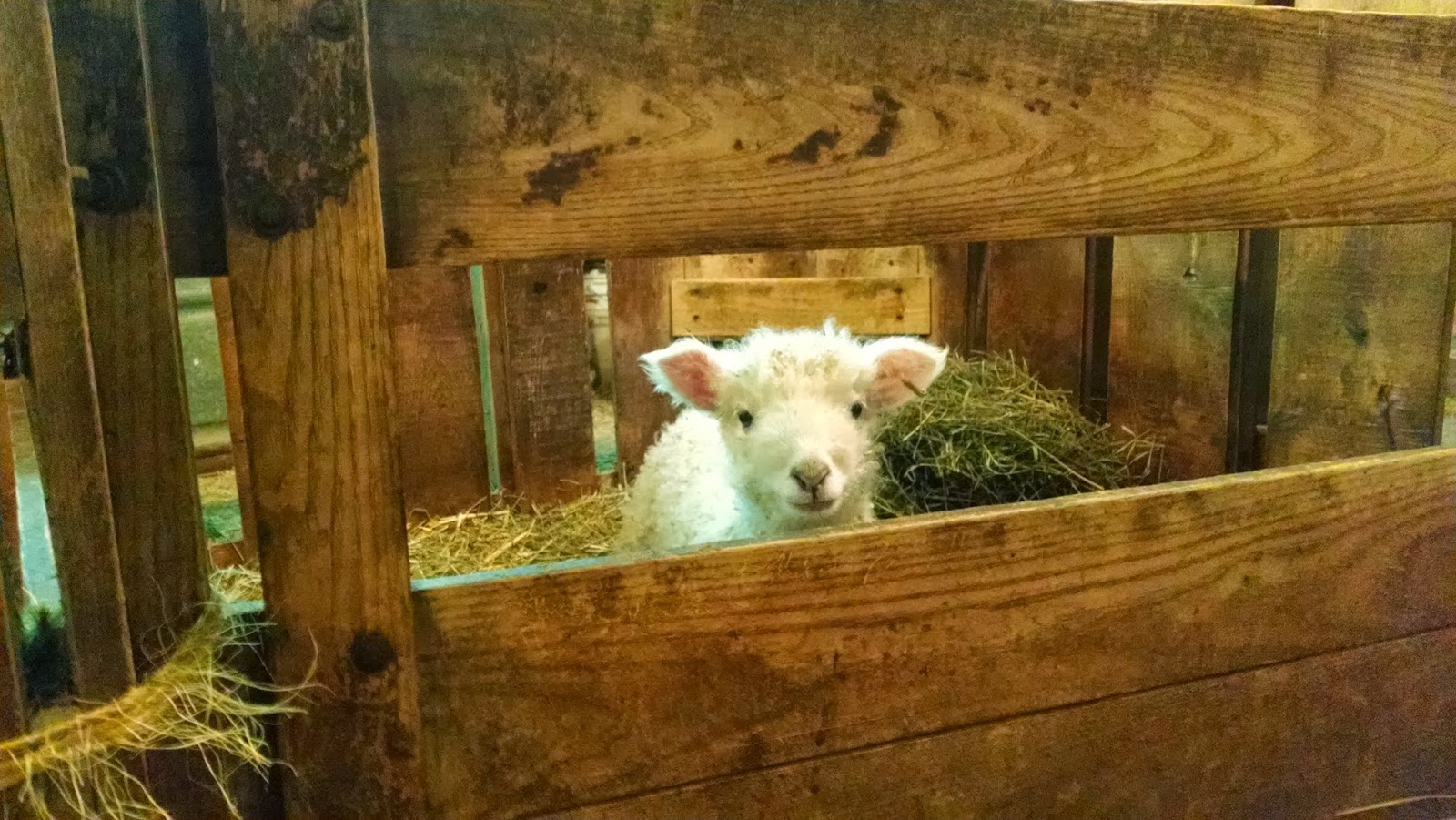 ﻿
Peanut is the smallest of a set of triplets.  She presented around April 10 with sudden lameness in her left hind leg.  Sometimes mom steps on a little footie so we didn't get too alarmed but by evening chores she was losing the ability to use her hindquarters.  Yikes.  Long story short, we're assuming either a traumatic back injury or a creeping spinal infection coming from her tail docking.  After a very bumpy 2 weeks with various drug regimens she seems to really be on the road to recovery. (Have to qualify that with "seems to" to avoid the jinx again.)  She's now a true bottle baby but she's so stinkin' cute and we're so glad she's improving that it's fine.

We opened up a connecting alleyway and another section of pens and the lambs have a longer racecourse now.  They have a great time running - it's like waves on the beach coming in and going out.  They are starting to run out of steam toward the end.


Andy just finished clearing the old feed bunk of stored dirty bedding from the mid-winter barn cleaning.  We'll be opening the whole area up to the ewes with lambs soon and then there will really be some races!
Posted by Sheepmom at 3:06 PM 2 comments:

It's been a busy three weeks!  We're getting down to the wire now - one ewe left to lamb!  Woot!  Her udder says she is still several days away from doing the deed so I can sleep through the night for a few nights.  Waahoo.

Here's one of the most recent arrivals.  The ewe is Star.  Her lamb is quite a survivor.  His twin sadly expired a few days before birth for some reason and when it was stillborn I assumed the other lamb would be deceased too, but no!  He came out hale and hearty. 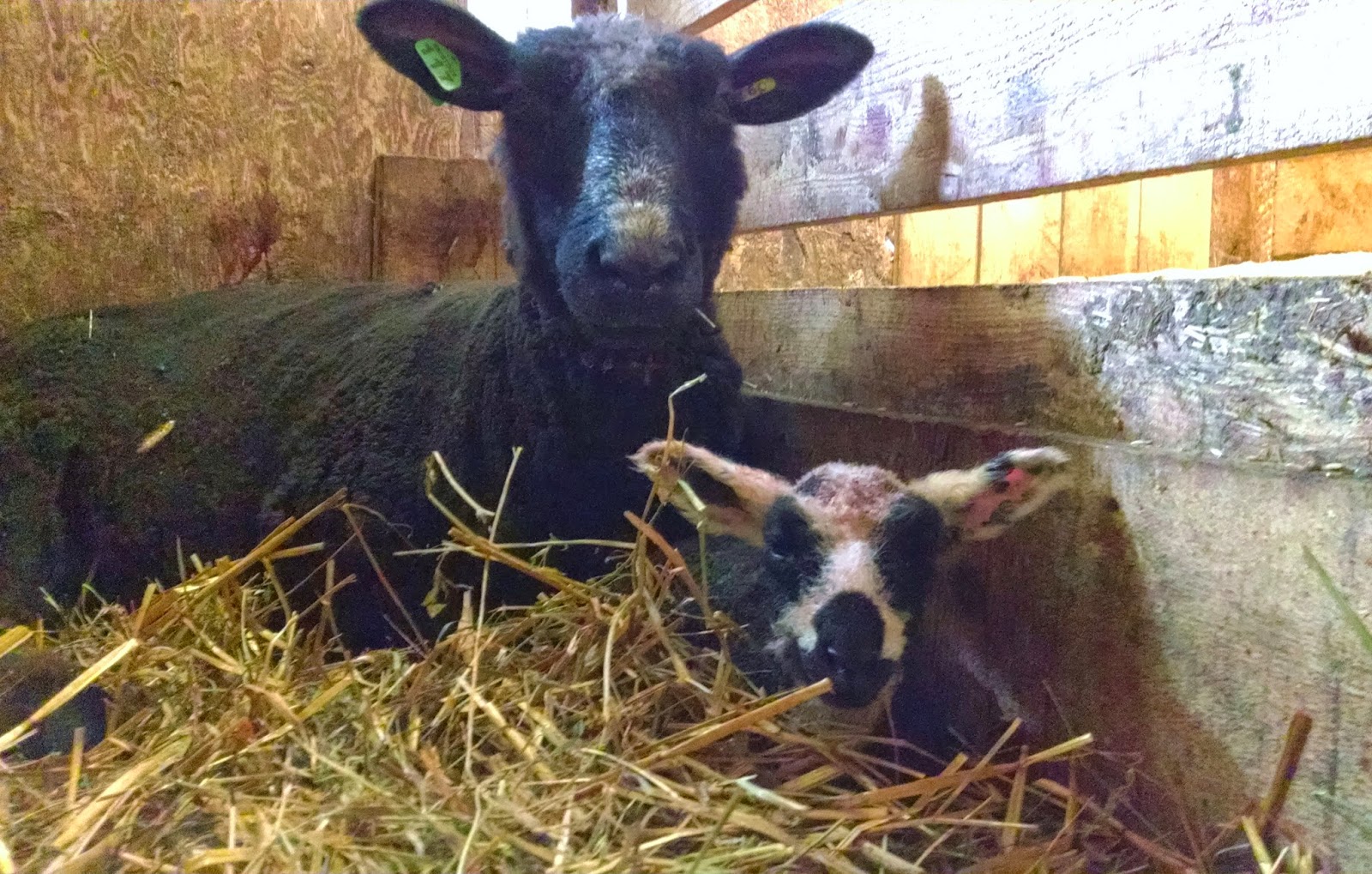 Ivan is tired of all the constant hubbub in the barn. 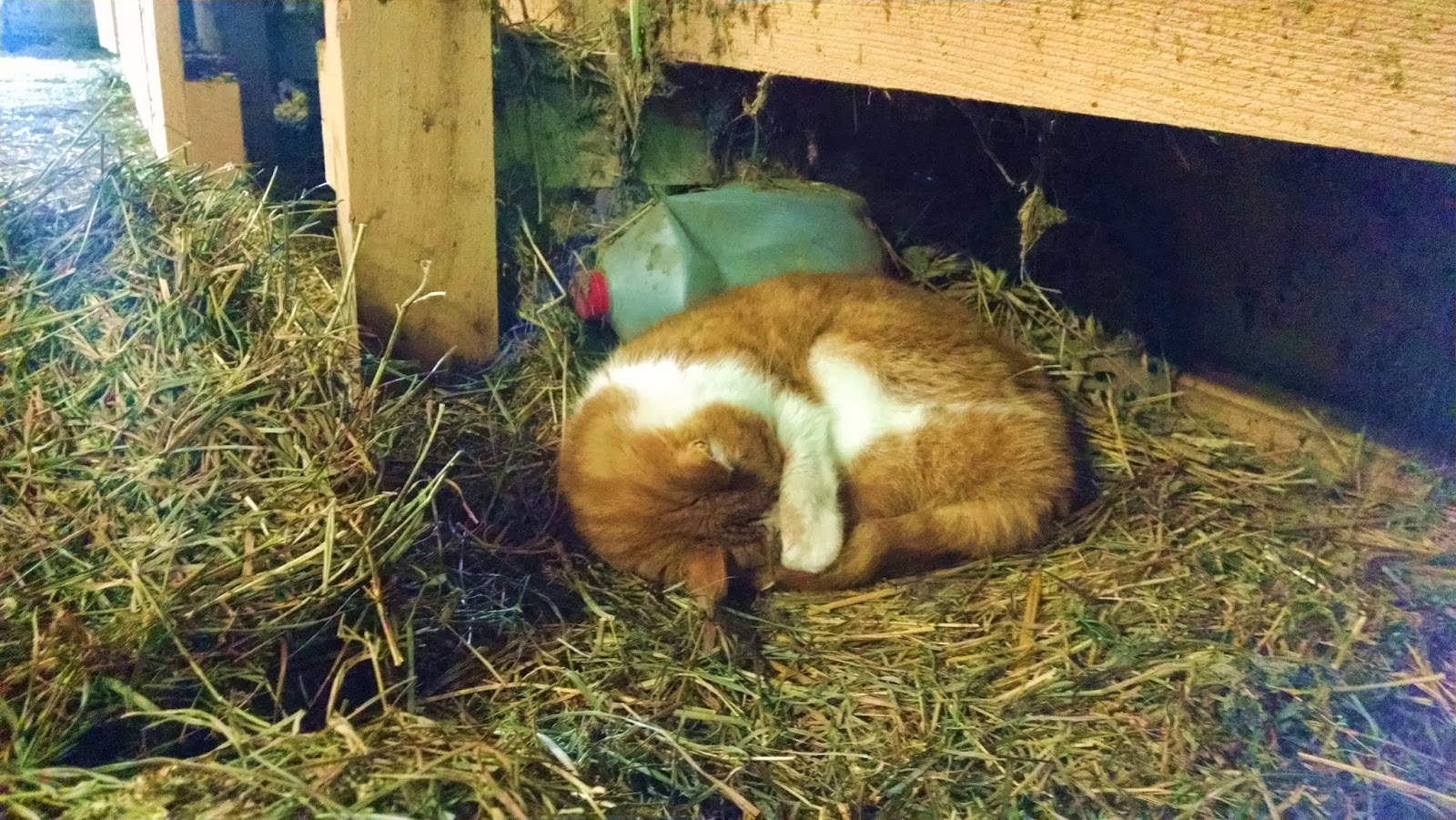 "Wake me up when it's over.  On second thought......don't bother."
Morning and evening feeding time gets the ewes all over to the hay feeders so the floor is clear.  It's a green light to the lambs for some racing and bouncing.

Must Be Something in the Water

Domino had twins - a solid black and this crazy-quilt pattern of black and white. 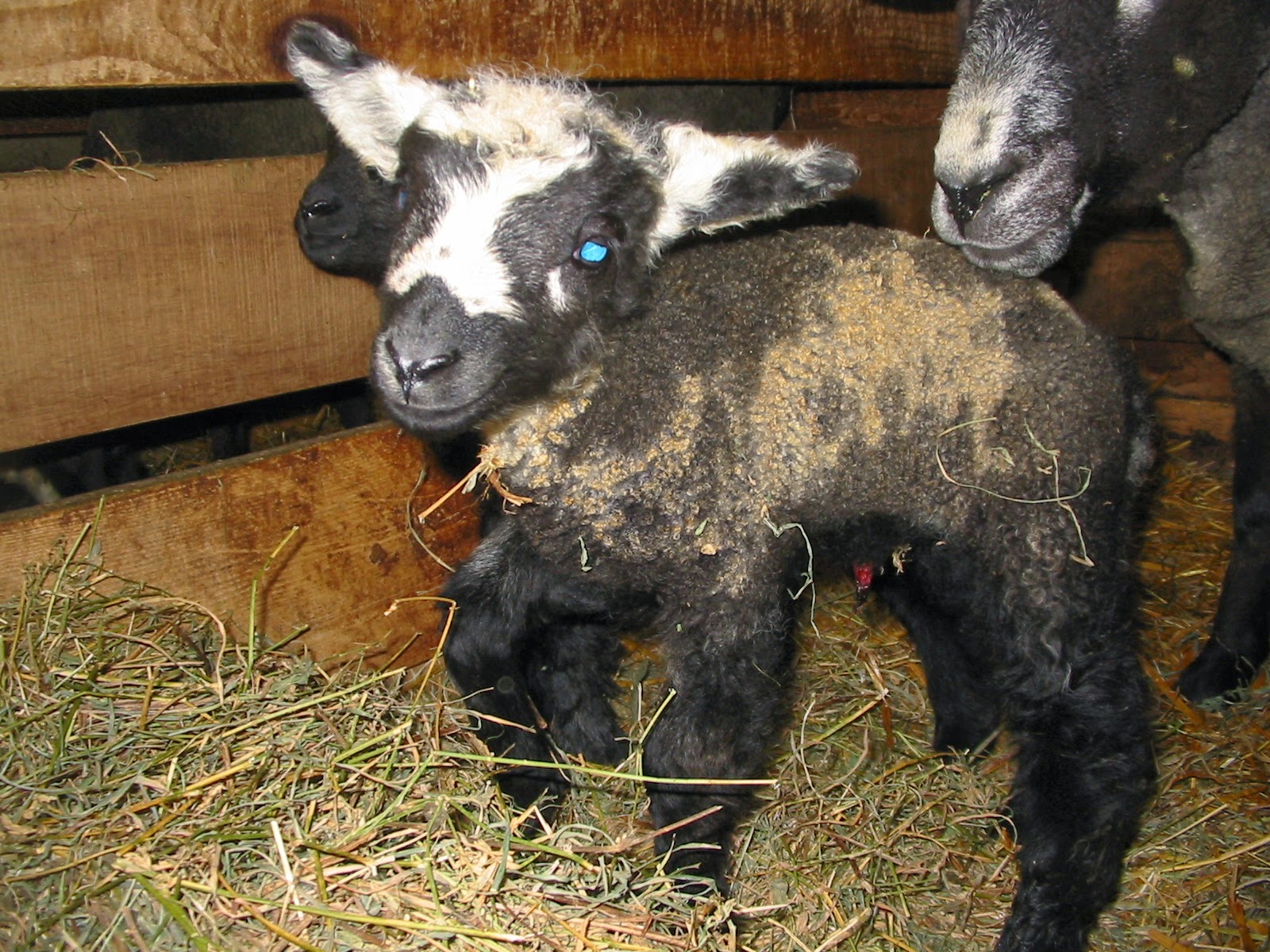 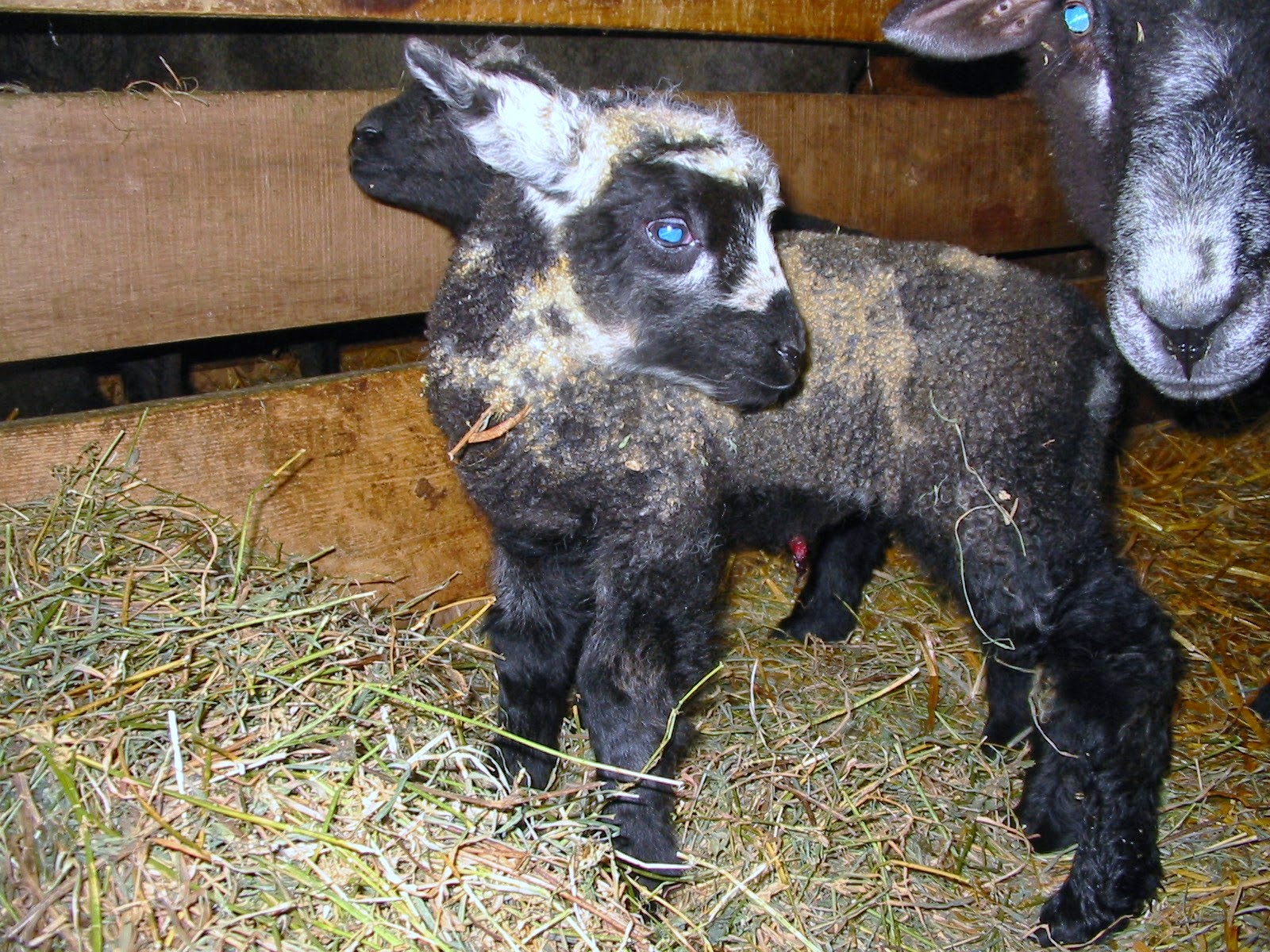 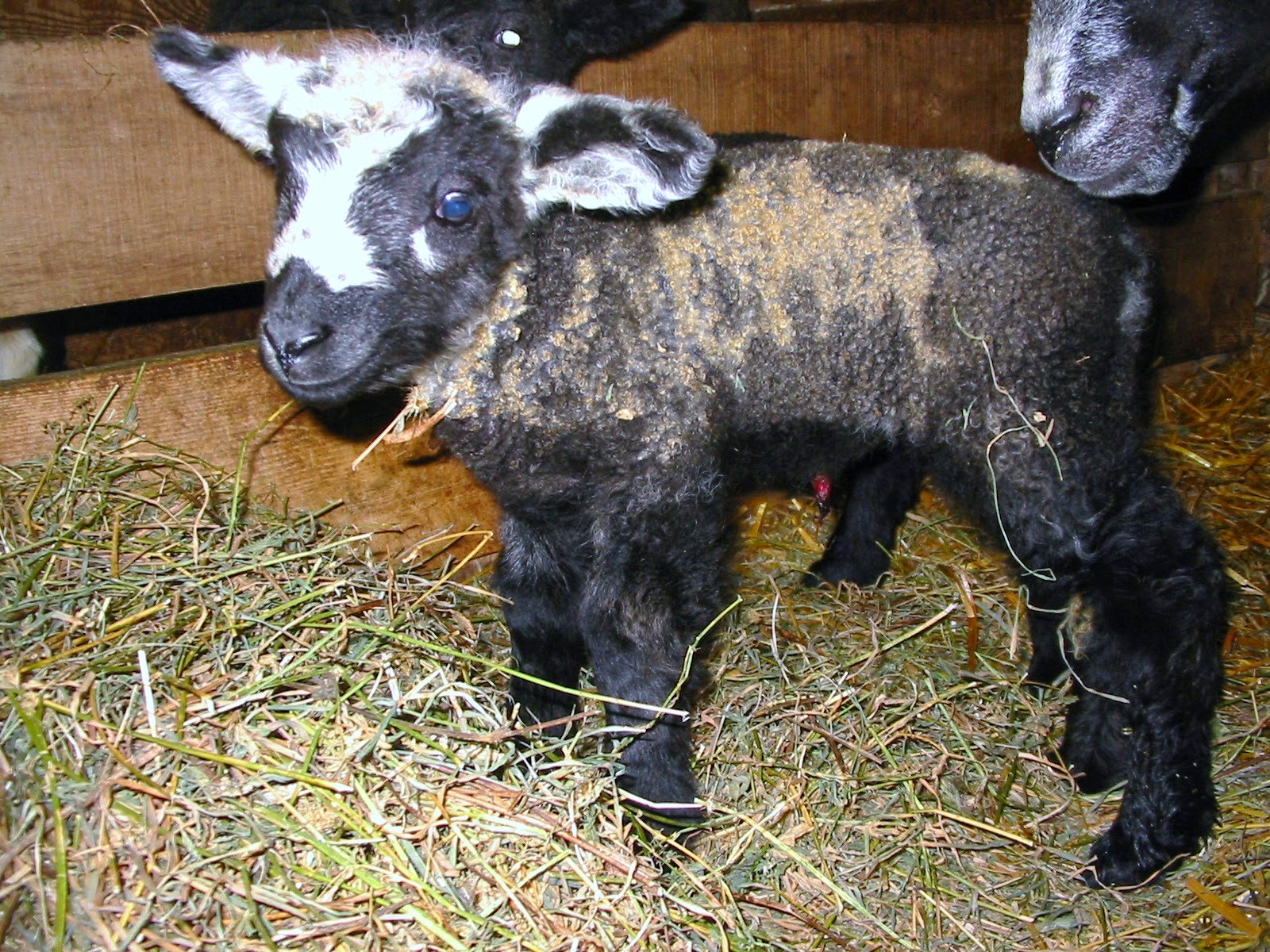 Then in the wee hours this morning Dollar had this fancy baby. 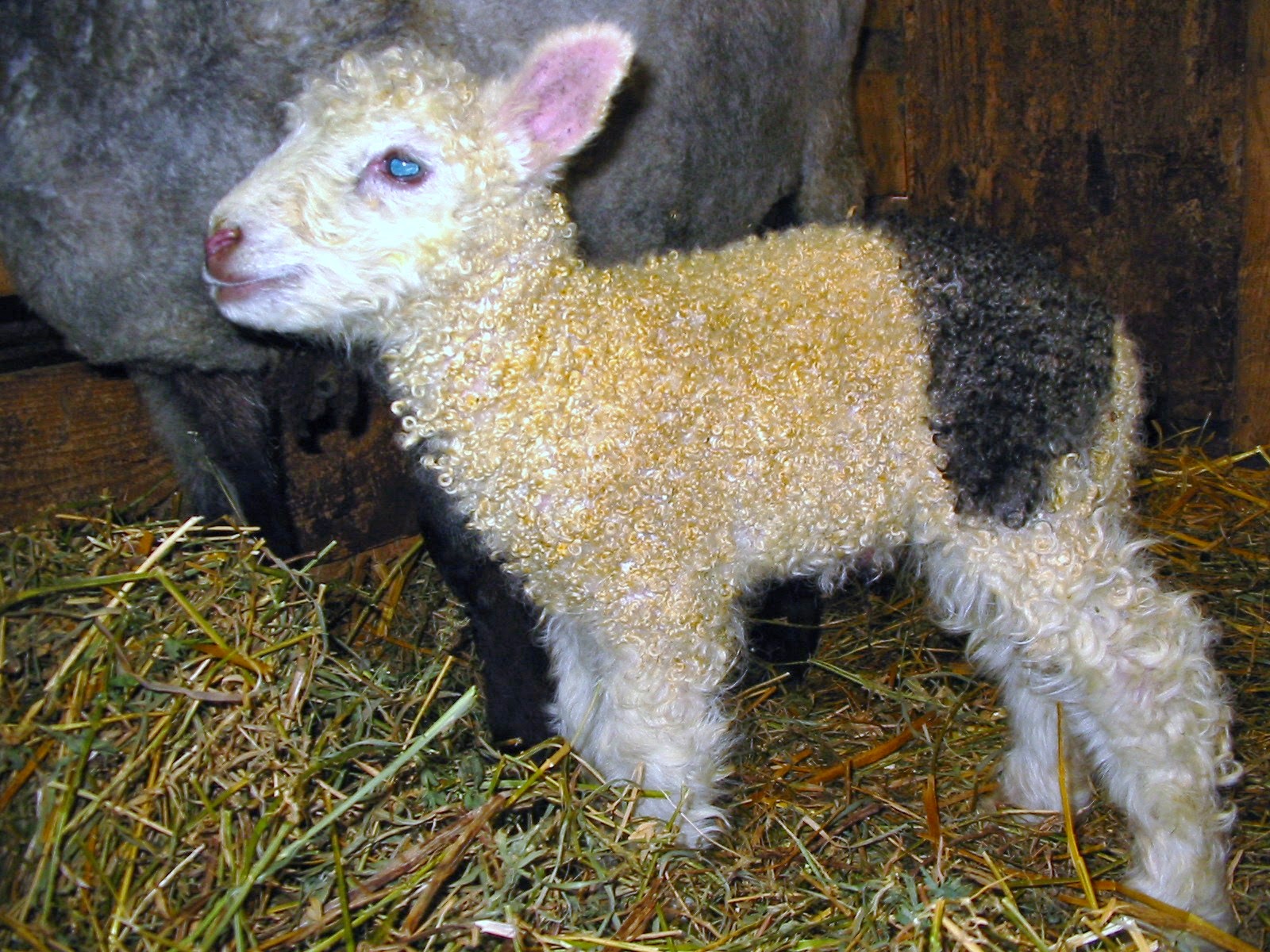 Born wearing shorts!  Seen from above she looks a bit like a yellow and black koi swimming in a square tank. 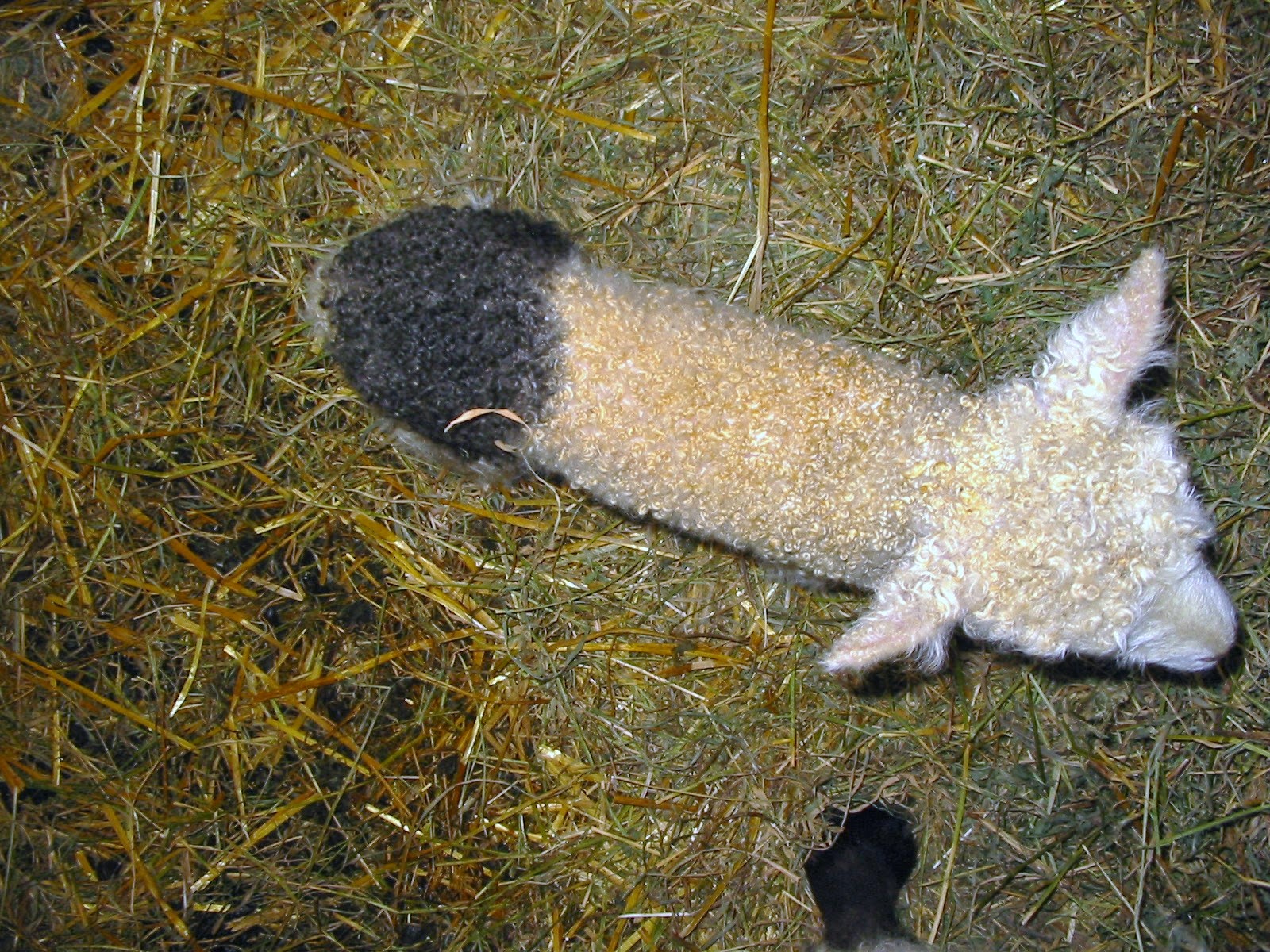 And then this afternoon Kitty had twins.  An all white baby and his sister - with a spot.  This is very atypical of Cotswolds!  One has to wonder if the genetics are white-lamb-with-black-spot or is it a black-lamb-with-(large)-white-markings ?  Color genetics are pretty complicated but the cute factor is easy to see. 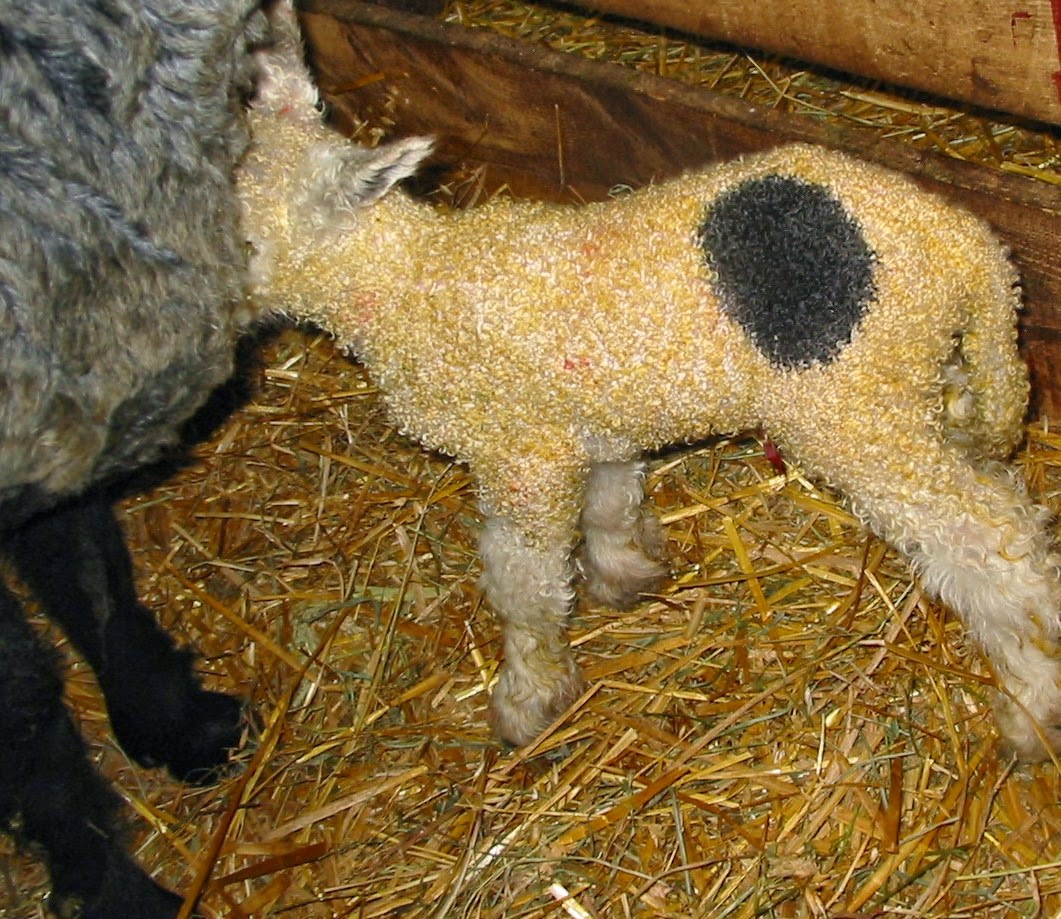 More lambies on the way soon judging by the large gals sitting around, resting.  I like it when they stick their front legs straight out in front.  Makes me think of Lily Tomlin as Edith Ann sitting in the big chair on Laugh In. Hmmm, that would actually be a good sheep name! 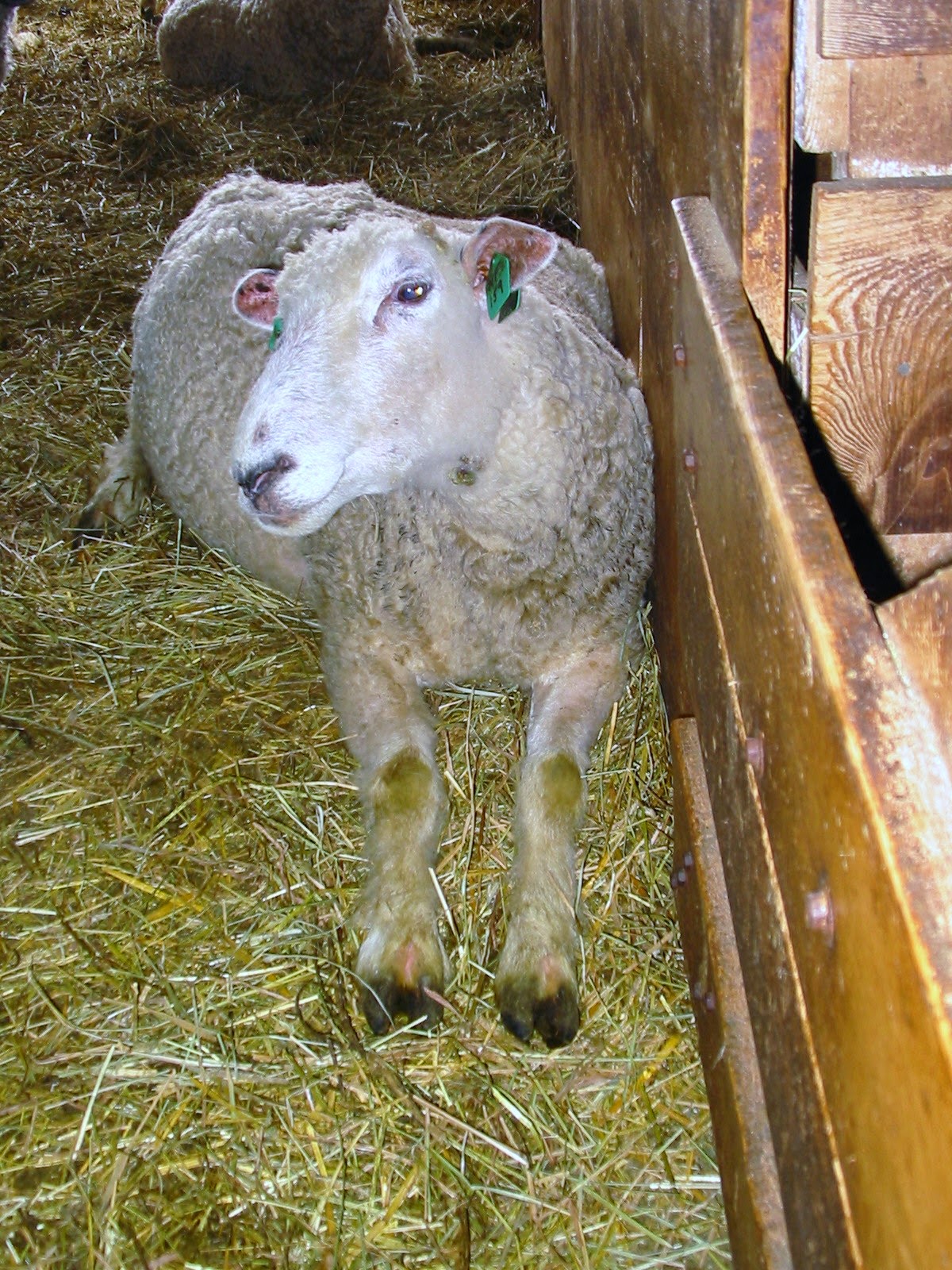 And that's the truth.﻿