Farming in general has a lot of specific seasonal tasks - planting time, lambing time, getting in firewood, shearing time and lots more.  One of the busiest and most taxing is hay season.  For a variety of reasons we use small square bales, not the big round ones.  I've never worked with the big rounds so I can't say for certain but I don't think putting them up requires the same amount of human grunt work that the small squares do.  For everyone who's never been pressed into service baling hay, here's the Top Ten observations about it.

You know it's haying season when:

10.  You're too tired and it's too late to go to the store anyway so supper is Spam sandwiches, heated up leftover mashed potatoes and a bowl of ice cream.

8. You lose track of the days.  Thursday?  It was just Monday.  How'd that happen?

7. After sweating and grunting and working for three weeks you shed a few pounds of flab which is great until you realize this is probably the best you're going to look all year.  Meh.

6.  You wear through the legs of your jeans handling bales are hear yourself sound like the cliche 'old people' - "They don't make clothes like they used to!  This denim is like tissue paper!  It's this $#%&$ stuff from overseas!  When I was a kid you got hand me downs from when your father was a kid and they never wore out....."

5.  You develop a farmer's tan so stark that it precludes you attending weddings, graduation parties, picnics or other public functions in anything other than a short sleeve top with a round neck.

4.  You watch the bale count climb with more breathless anticipation than any presidential candidate gathering delegates.

3.  You drink more iced tea in a few weeks than you do the entire rest of the year.

2.  Checking the Weather Bug app on the phone six times a day and comparing it to both the newspaper's and radio's forecast doesn't seem excessive.

and the Number One way you know hay season has arrived........

1.  You drop your drawers in the bathroom and chaff flutters down like confetti.  Wheee!  Looks like I'm a winner!

Angel is recovering well from knee surgery and can now Go Walkies on leash with Holly as long as there's no vigorous romping around.  The girls were keen to go down the road and when either one stopped to investigate something the other one came over to see.  Must be like shopping with a friend - "Oooh, look at this!" 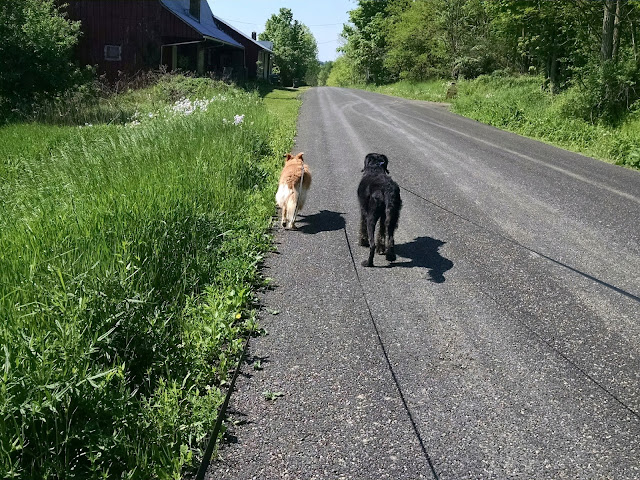 Crossing the town line the road changes from paved to dirt. 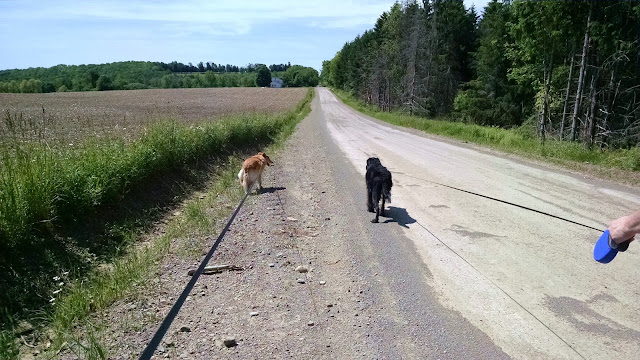 A nice slow stroll downhill is fun even when it's hot but then you have to turn and walk back. 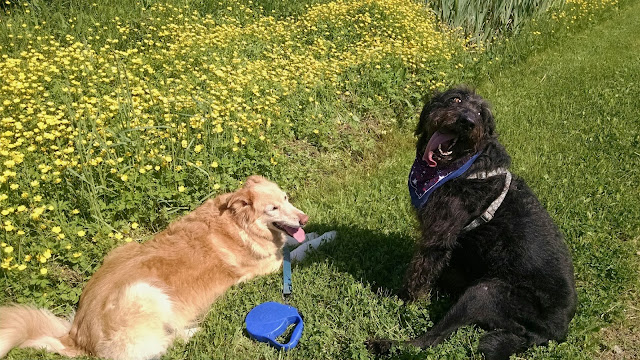 "Mom, the ditch is full of buttercups, not water!  That's just wrong!"

But back at the yard the big water bowl was filled to the brim and big drinks were had, followed by a flop on the grass.  Holly even dipped one foot in to cool off.  That's all she would have done even if the bowl were a pool - she's not a water dog. 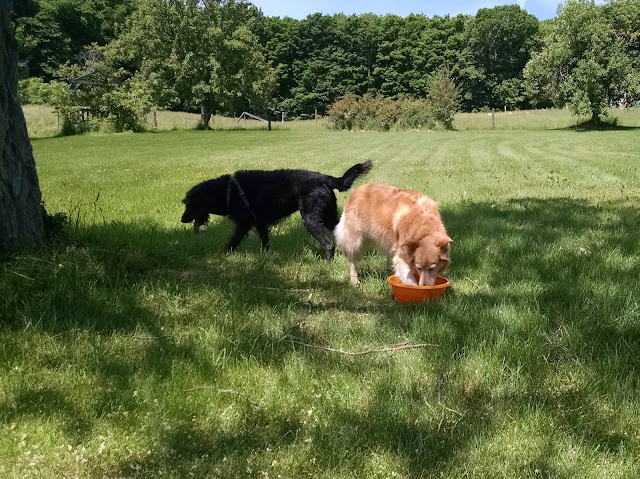 A walk with a pal, a drink and then a rest in the shade - that's the way summer is supposed to be!

April and even May are supposed to be the months with big temperature swings.  This year June followed along.  Last weekend was the Central New York Fiber Arts Festival  and I took a day and trekked out there to investigate.  It was gray, rainy, very windy and in the low (low) 50s.  I ended up wearing four layers and lunching on hot sausage with peppers and onions topped off with hot coffee to try to keep warm.

The venue is very nice.  Long tents of vendors were laid out facing other tents that had a fleece sale, workshops, kids' area and sheep shearing trailer.  Despite heavy rain Saturday the grounds were not muddy and the vendor booths inside were fine.  The tents were high and quite bright inside despite the gray day. 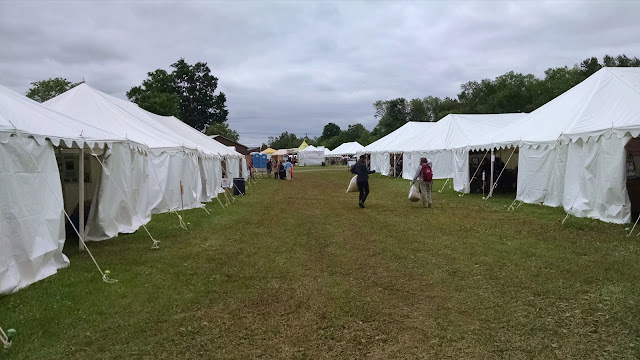 There were supplies for spinners, knitters and other fiber artists and also a lot of finished goods for non-fiber people.  I picked up a couple of well-crafted items that are destined to be Christmas presents.  (Ha!  Got started on that  list!)

There were several vendors with fiber animals in their space and one farm brought one of their LGDs (livestock guard dog) along too.  This sweetie is Aziza (I think that's right) and she's an Akbash.   She's nine years old and is built tall and long bodied with a very coarse, short hair coat. She was a great ambassador. 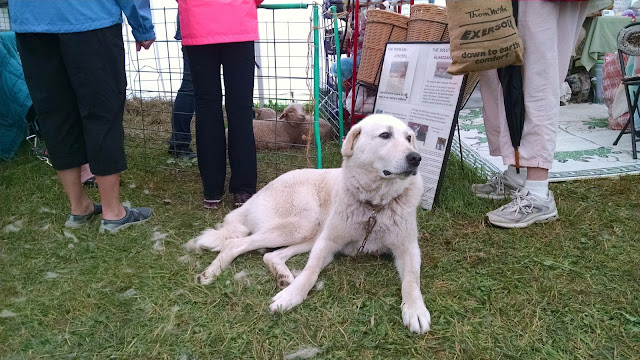 She was unfailingly polite and friendly to everyone and people were petting her all day.  She never seemed concerned at the strangers petting 'her' lambs, but she did bark a deep bark when a border collie went past the end of her tent.  These little Tunis lambs were her charges for the day. 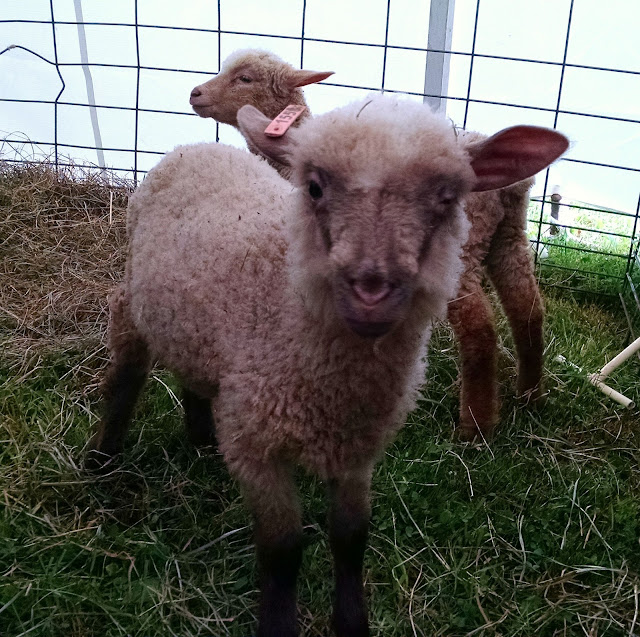 Another fun attraction was The Gypsy Tinker's wagon.  I must admit, it's a mighty seductive way to travel to shows - cuter and less costly than a commercial camper and the owner built the entire thing herself on a good old Tractor Supply trailer bed. 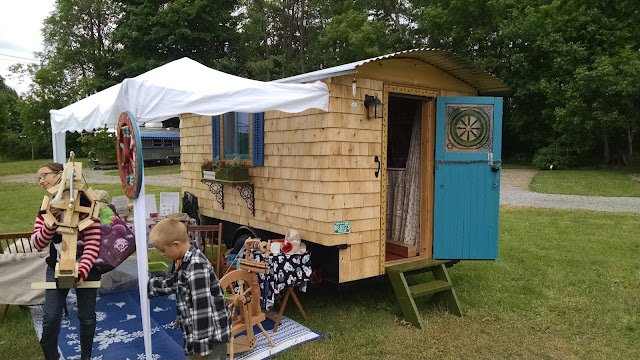 Apparently, Gypsy wagons are a 'thing' and popular with people who have construction ability and a nomadic bent. 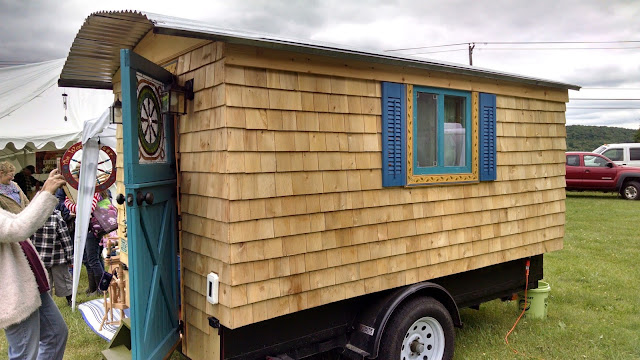 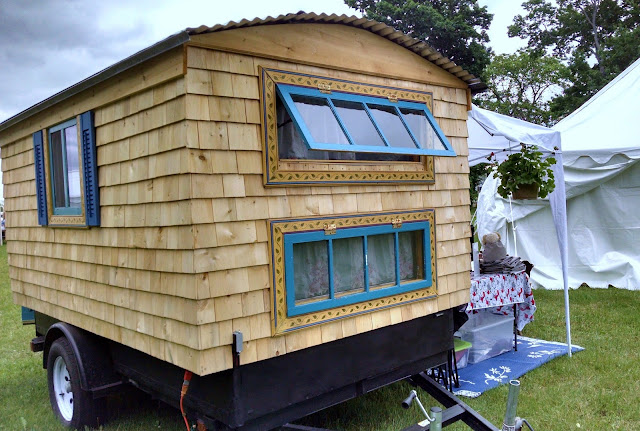 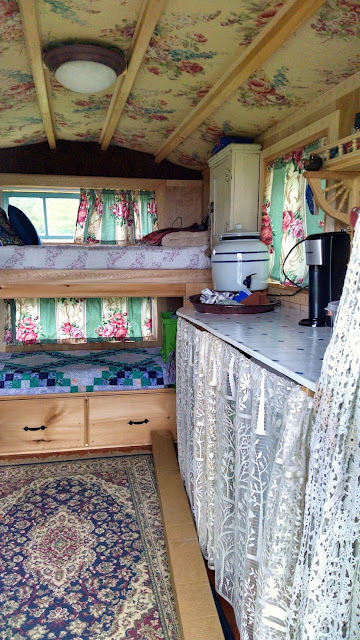 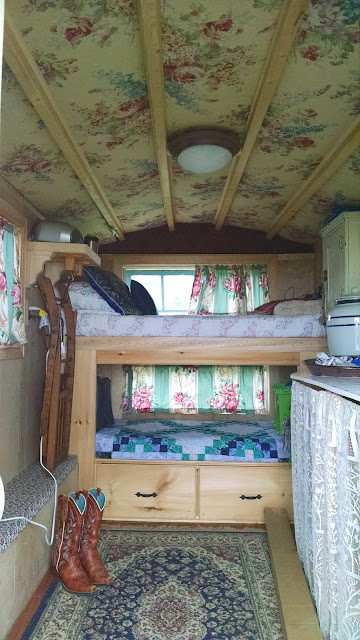 Wow, if you could just pack all your vendor materials in the back of your pickup with some extras in the wagon and hit the road.......

All in all it was a fun day!

That was Sunday.  Tuesday it was sunny and 70 at home and Andy turned this.... 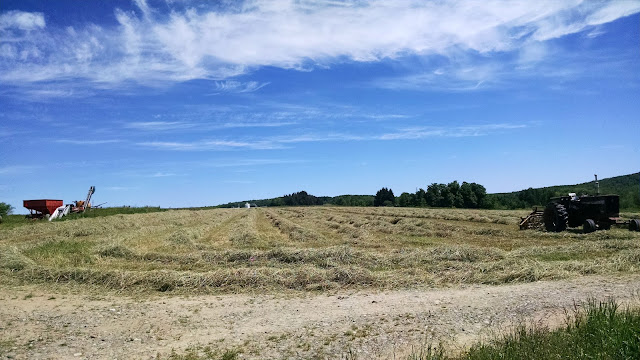 We unloaded three wagons last night and two this morning and he finished the field before 1 PM this afternoon.  That made somewhere over 900 bales, so we're off to a good start. We haven't been able to bale hay in June in some years - it's been wet until July.  We need rain, but if we can't have rain we'll sure take hay!
Posted by Sheepmom at 7:57 PM 5 comments: