It's that time of year around here - Monarch butterflies are in the air although not in the numbers I remember from years ago.  Their population has been in decline for some time and apparently there are people - legions of them - who work to help Nature by raising the caterpillars and releasing the adult butterflies.  My friend Amy the Fibergoddess from Stone Edge Fibers collects young ones and raises them every year and she inspired me to do the same.  (She also pointed me to a great facebook group - Raising Monarch Butterflies.)

We have an abundance of milkweed and it's actually an invasive weed that farmers try to keep out of their crops.  Not only does it spread by the pretty, fluffy parachute-like seeds that the wind carries but roots send up new shoots and can remain viable underground even after some herbicides have been used in an area.  We see it growing on the edges of fields and in fence rows and have several large islands of it that have sprung back with vigor in alfalfa that was cut in June.

Mortality in the caterpillars in the wild is pretty high.  Despite being nasty tasting, which is supposed to discourage birds, they are preyed on by other insects and are subject to viral and bacterial diseases just like all other living things.  Caterpillars fend for themselves so taking them from the wild and raising them to adulthood doesn't interfere with any family/pack/flock social structure.

I carried a small Tupperware container with me while walking Holly and found several to adopt!  The bigger ones were set up in an empty plastic dog biscuit container with the lid altered to have mesh on top.  I broke the tops out of some plants in the field and stood them upright in the container.  Everyone seemed very content. 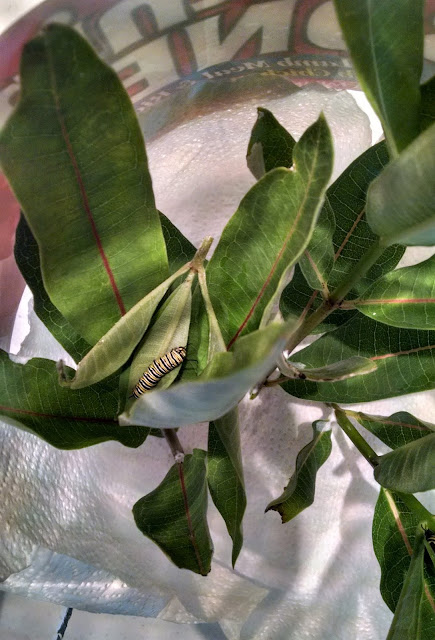 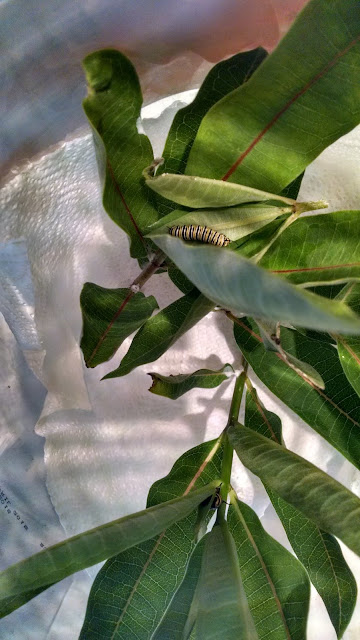 I also found an egg on the underside of a milkweed leaf.  They are very small - the size of a grain of salt but smooth and barrel shaped.  I put the leaf and a couple very small caterpillars (cats, as the 'professionals' call them) in a Tupperware container with the lid snapped on.  Opening it a few times a day gives the littlest ones sufficient fresh air and also keeps the humidity up for them.  In just a couple of days the egg hatched.  That's the newly hatched 'cat', on the leaf below 'Liberty'. 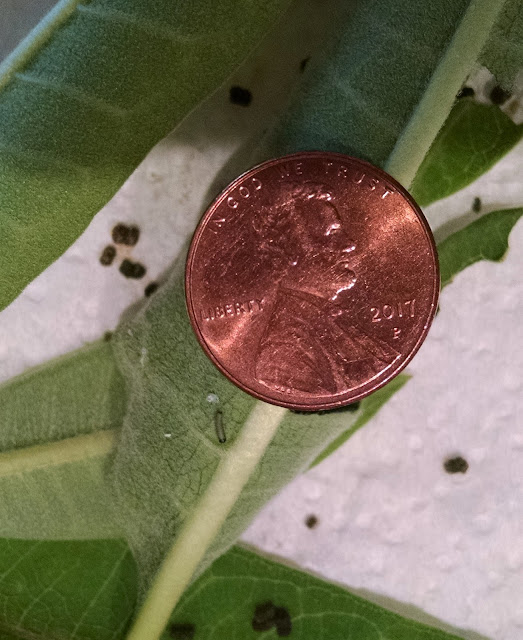 I put the containers on the sill of a north facing window.  They need light but I didn't want to put them in direct sunlight.  At night they go into the breezeway which is a secure 'cat free' zone (Real cats!) so mayhem doesn't occur.  I put sticky notes on the lids to remind myself how many residents each container holds. 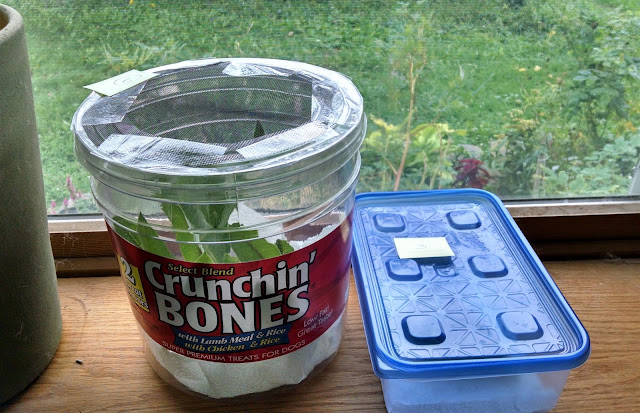 It didn't take but a couple of days and the largest ones were looking for a spot to make a chrysalis.  I moved them to a larger container with mesh over the top.  They promptly crawled up there and made the change.  Tactical error on my part - now it's hard to move the mesh top without disturbing them.  Live and learn. 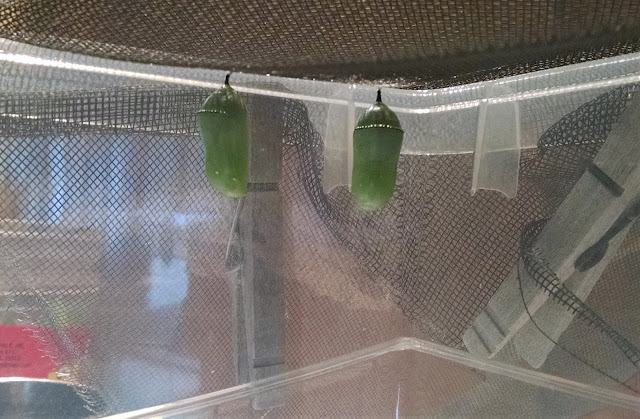 As other cats matured and started looking for a place to make the change I let them stay in the container they were housed in until they picked a leaf to stick to.  Then I plucked the leaf and clipped it to a bare branch I had set in the big container. 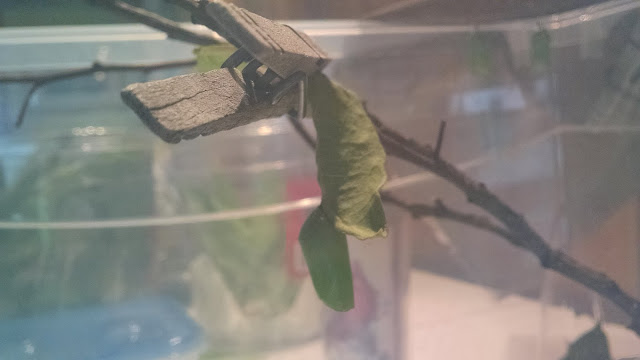 Once they pick their spot and make a "J" I'm certain they will stay put and change. 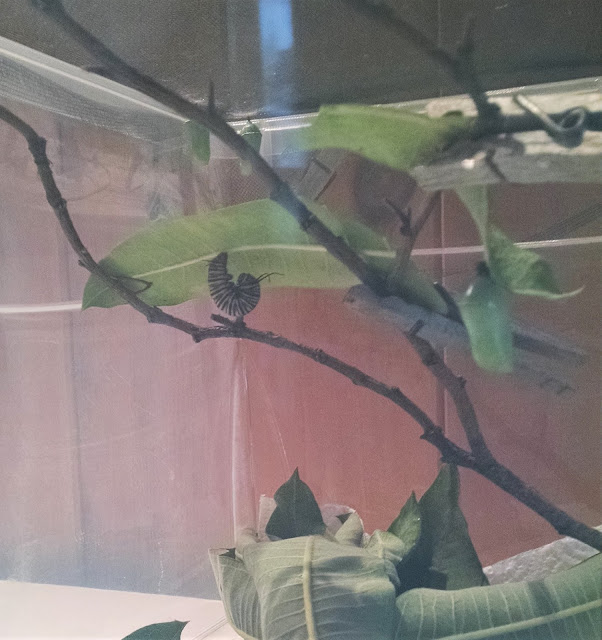 By this morning I was up to ten chrysalis in the big tub and the very first, oldest one (about 2 weeks old at this point - note to self, keep better track of how many days the various stages take) had turned clear and I could see the black and orange of body and wings, albeit all scrunched up.  By afternoon the butterfly was out! 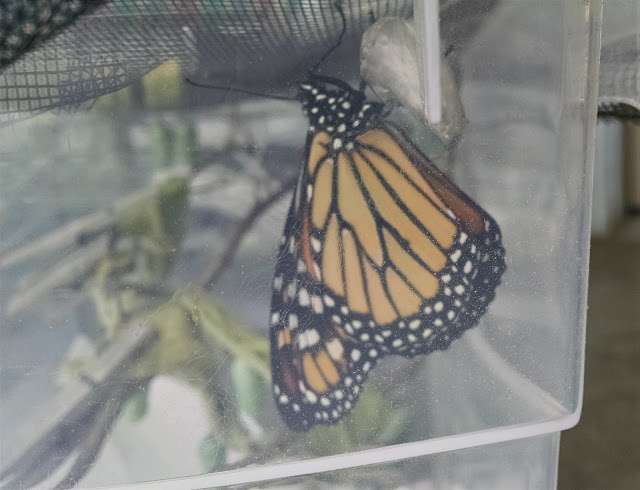 After letting it rest and stretch I moved it - him, it's a male - to a goldenglow blossom to finish his butterfly exercises. 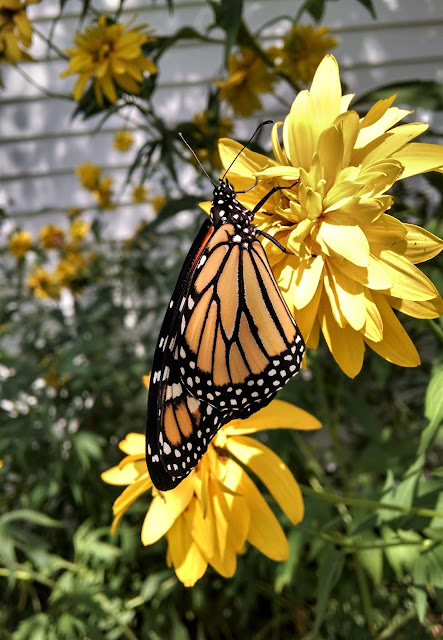 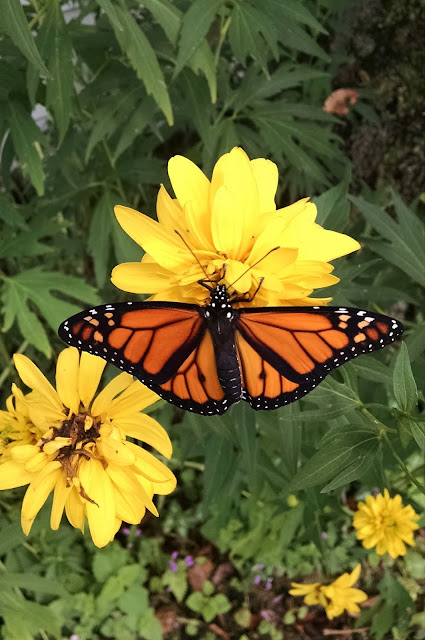 At the moment I have nine more in chrysalis, three mid-sized cats and three eggs that I just found today.  Reading some of the facebook posts about things that can go wrong with them is dismaying but so far they all seem to be developing normally and it's satisfying to see the milkweed leaves being devoured and the caterpillars growing.  I can manage a seasonal increase in the livestock around here when there's a happy set-you-free ending!  And maybe it will help them recover just a little.
Posted by Sheepmom at 8:33 PM 9 comments: