Happily we finally have some spring flowers!

The ever-popular daffodil in both two-tone form..... 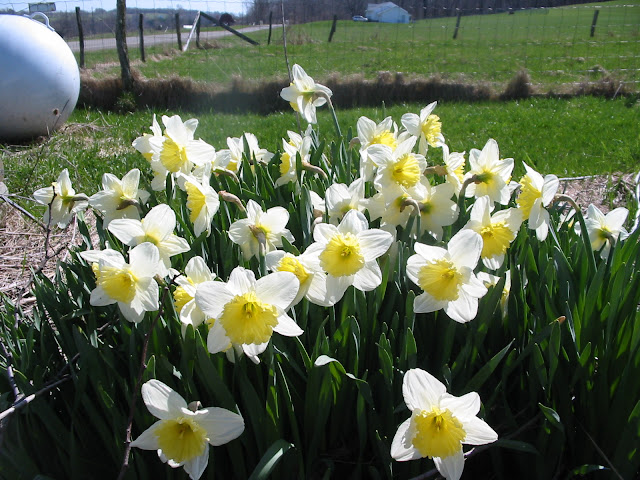 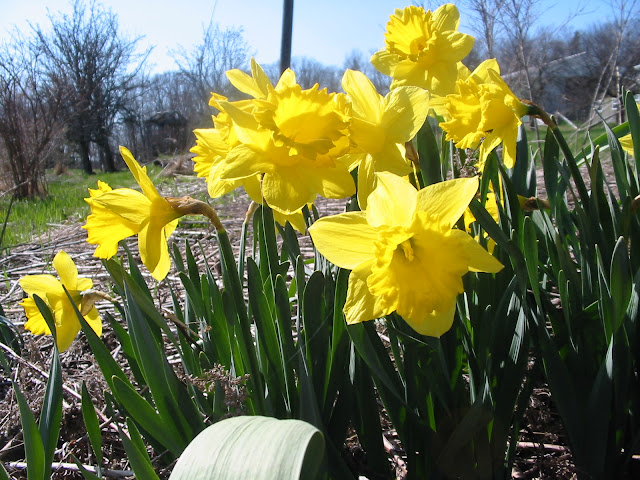 Little blue flowers whose name I don't recall.  See the honeybee at top/center?  :-) 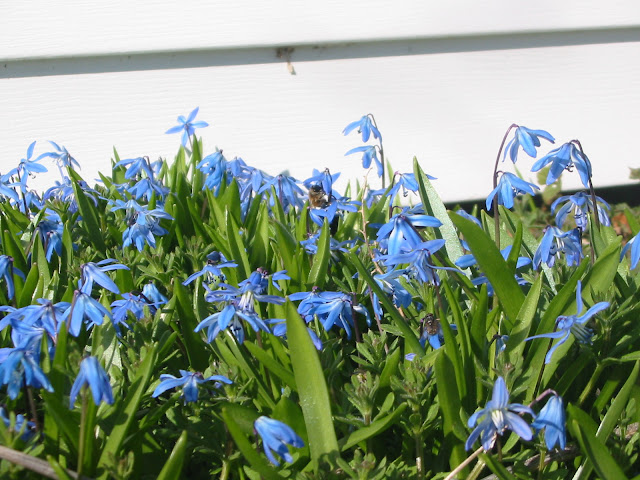 Down the road the banks are covered with creeping myrtle.  Later the other weeds wild plants cover them over but at this time of year they get all the sun there is to have under the bare trees and they flourish. 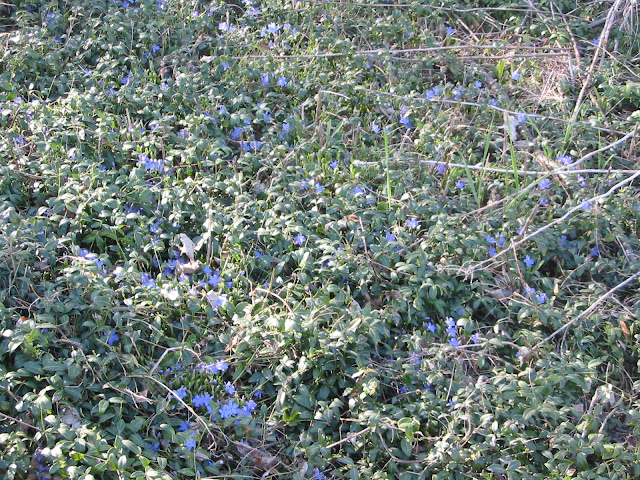 And more daffodils; pretty double-flowered ones. 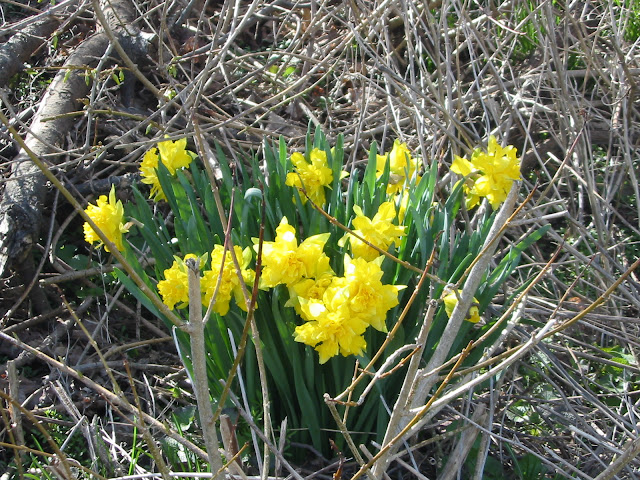 I think at this point they fall into the 'wildflower' category because there used to be a home and service station (yes, for cars and trucks with gas pumps and all) on this site FIFTY years ago.  Everyone associated with that is dead and gone except the daffodils. 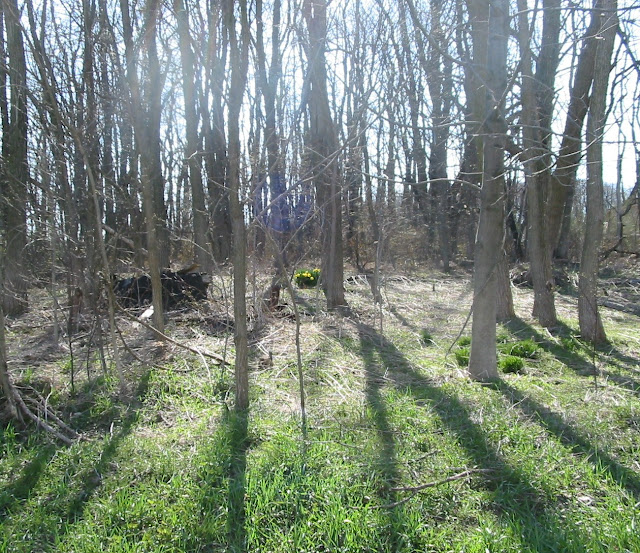 There are certainly worse things one could leave behind when your time on Earth is over.
Posted by Sheepmom at 7:15 AM 8 comments: 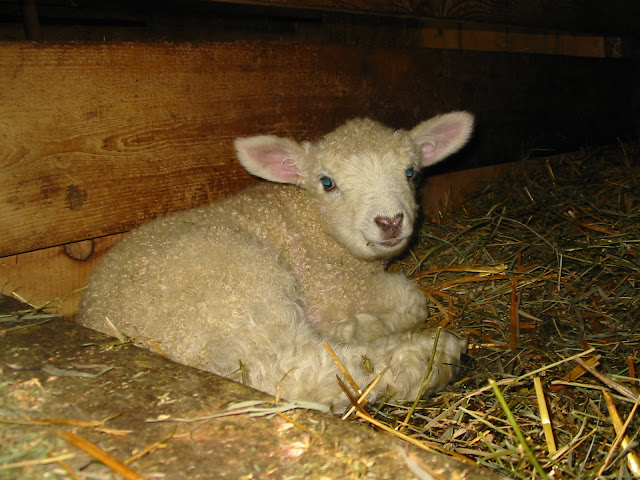 I wanted to get a little closer so naturally he got up and photo-bombed me.  I like the symetrical curly hair in front of his ears. 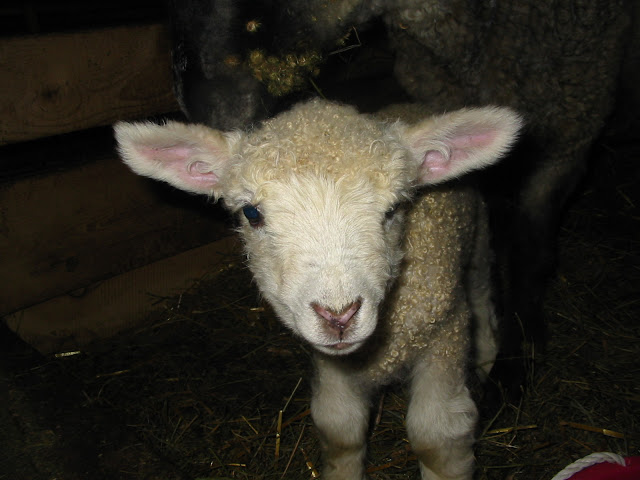 It's been an awfully hectic few weeks - so hectic that I failed totally to blog along the way.  I have to sit down with the record sheets to cite facts and figures, but I can say it was definately a "ram year" with significantly more ram lambs than ewe lambs born.  I had no colored Cotswolds born because I used a white ram on all those ewes and his white trumped their color.  That's OK.  When I put those daughters with a future colored ram I should get lots of color.

It was a rough year health-wise for the flock.  We lost Pearl before lambing and a Cotswold ewe named Kuddles to pneumonia.  Hazel gave me Fortune via a C-section and sadly expired once off anesthesia.  And a Cotswold named Ilsa had triplets that got tangled up with each other a few days before she likely would have delivered and it caused the death of at least one lamb which caused her to have an abnormal labor resulting in a long vet visit culminating in 3 deceased lambs and Ilsa having to be euthanized due to a perforated uterus also likely caused by the triplets becoming entangled with each other.

We had three live sets of triplets.  One set became a trio of bottle babies when mom developed mastitis.  Another from a different set became a bottle lamb due to being so much slower and weaker than her siblings.  The third set of triplets was cause for worry because mom really didn't like lamb #2 or #3.

For various reasons I found myself with upwards of ten lambs who were wholly or partially being bottle fed and I was only half way through lambing.  I started getting a little panicky since I know darn well that I get too attached to bottle lambs to do anything but keep them.  Happily - thankfully - the wonderful lady that runs the Wool Center at the state fair is also heavily into 4H and knew some families craving bottle lambs.  I sent her off with seven early in April with a happy heart knowing that they would have good homes.  Two of them were lambs #2 and #3 from the above-mentioned reluctant mother.  Of course I kept Fortune and the three siblings from 'mastitis mom'.  Also the small weak triplet that had become a bottle baby and one last lamb from an old ewe who was so slow to get started that she ended up in the house.... for several days..... and so ended up a bottle lamb.  Coincidentally, even in a 'ram year' the bottle lambs are all girls.

The Gang of Six.  It must have been meant to be since they all fit on the bucket feeder :-/
That's Fortune on the far right - noticeably bigger than the others. 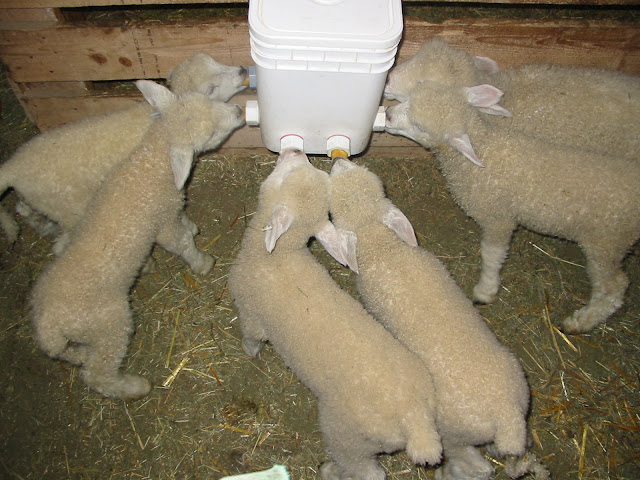 And here's a more flattering picture of her. 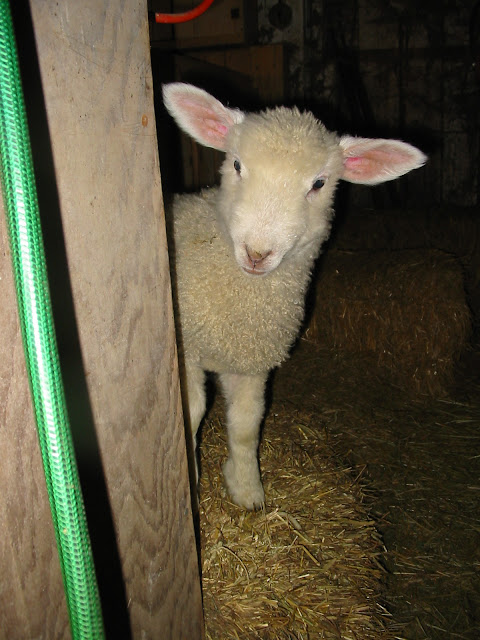 The others definately look to her as the ringleader big sister.
I used a new Cotswold ram on all the white ewes this year and I like the nice blocky lambs I'm seeing.  Many have the dark nose and tinge of dark in the ears that is fancied in the breed. 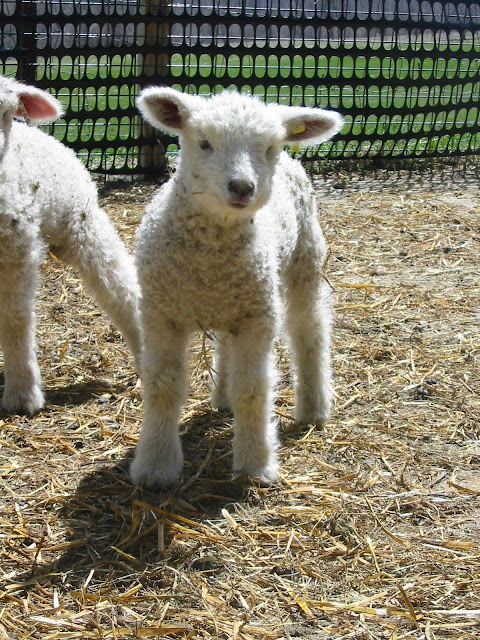 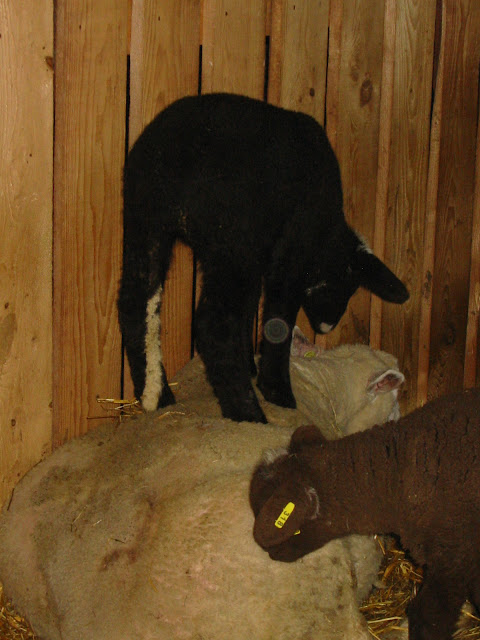 Investigating the world beyond the barn doors..... 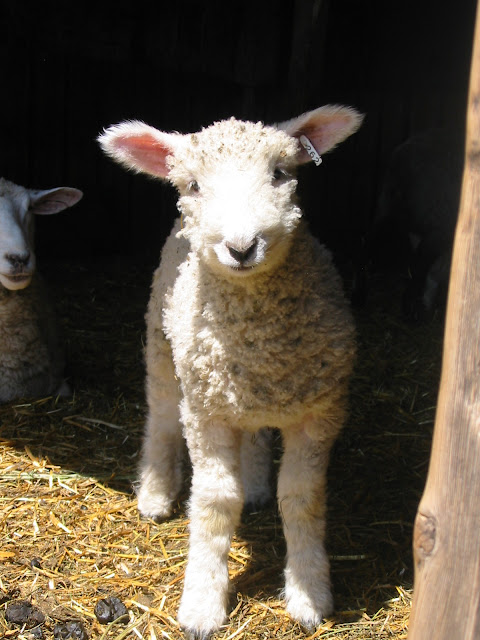 This guy was more agreeable about having a close-up taken. 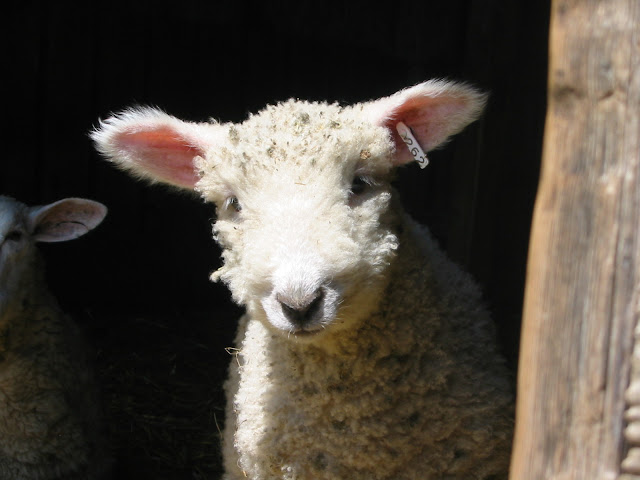 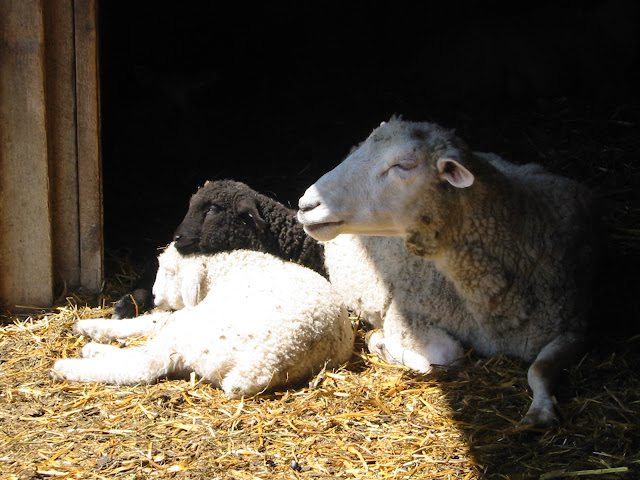 I like how the colored lamb is resting on his brother....kind of squishing him, actually.  But the sun is so nice he's sleepy and doesn't care.

And I'm happy that I can sleep through the nights again!
Posted by Sheepmom at 7:31 PM 5 comments: