Yarn Along - Progress On All Fronts

As sporadic as my knitting time is, I have still made progress on the guild KAL - the Noro Woven Stitch Shawl. 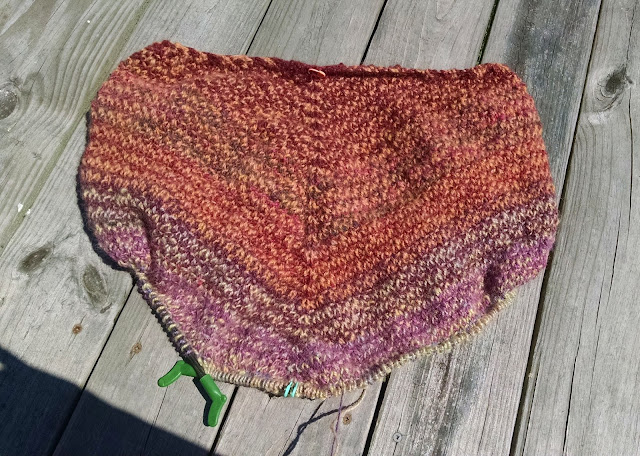 I find time mostly in meetings or in the truck if Andy and I are going somewhere together as he prefers to drive rather than ride and I'm happy to grab those extra minutes to work on this.  I have high hopes for serious progress (dare I say finishing it?) over the weekend while at the Maryland Sheep and Wool Festival in early May.

I have seven fleeces entered in the show and sale at MD and have six of them fully skirted and the seventh on the table at the moment.  This is an improvement over past years when I was still skirting the night before leaving or having to take fewer than the allowed seven.  I've also been squeezing out some reserved fleeces for folks with 'must-have' dates for their fiber.  I'll be able to work fully on the reserved fleeces after I'm sure I'm squared away for MD.

In other fiber news I have a new 3-color roving back from the mill - Easter Egg!  For the life of me, using 3 different cameras, I can't get these colors to show up properly!  The dark "blue" is really a dark purple.  The pink is pretty accurate and the light shade is a very pale gray/blue.  Whichever way I try to correct one color it drags the other 2 off in a wrong direction.  I still have to get it listed online.  Maybe I'll try taking pics again.... 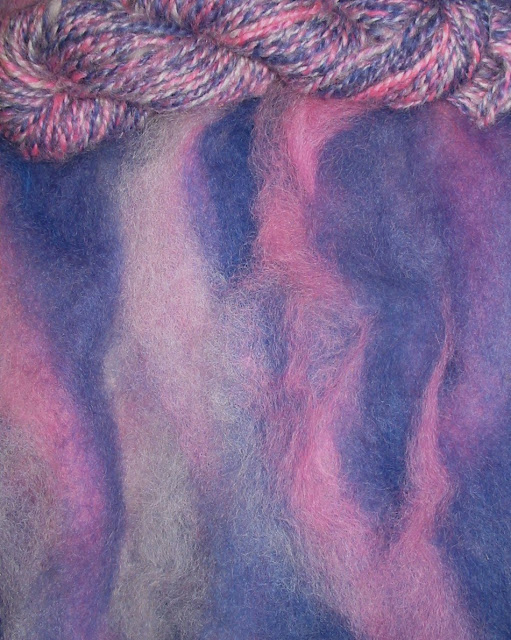 At the last spinning guild meeting a friend brought in the rug she created using some of our Gosh Darn Big Yarn which we had made for the first time last year.  Brenda is a genius and SEWED the yarn on her regular machine using invisible thread. I never would have thought of this in a million years. Starting with a tiny loop she kept turning the work counterclockwise so the growth all occurred off to the left of her needle. Using a zigzag stitch she just kept laying the yarn next to the previous round (which ends up zigzag sewing each strand on two edges) and worked it till gone.  Rug measures just about 33 inches across. 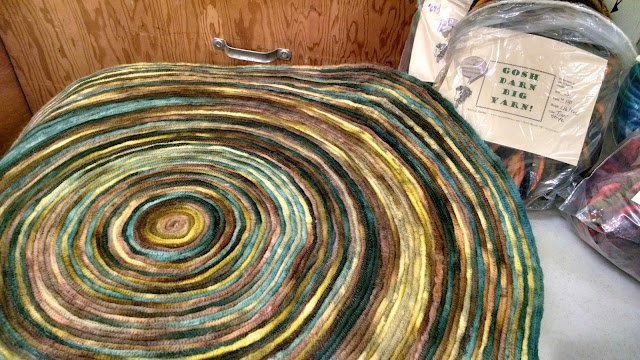 The weather finally - finally! - warmed up enough to feel like spring.  Our tree bees emerged on April 17! That's late compared to the bees I know of in other people's hives, but we're guessing it just took that much longer for the warmth to penetrate the tree.  It worked out fine since our bees came out to find lots of flowers already blooming - no hunting around half starved. 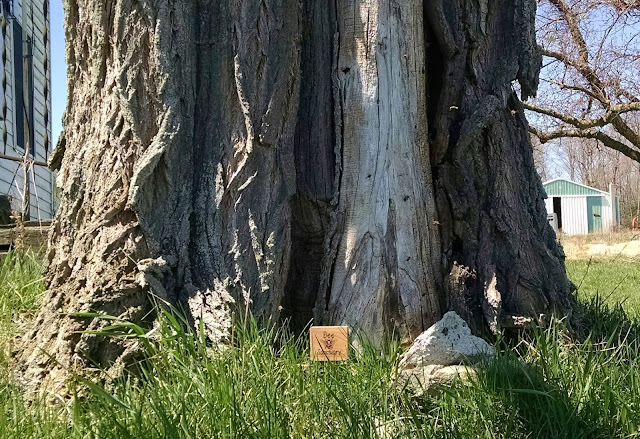 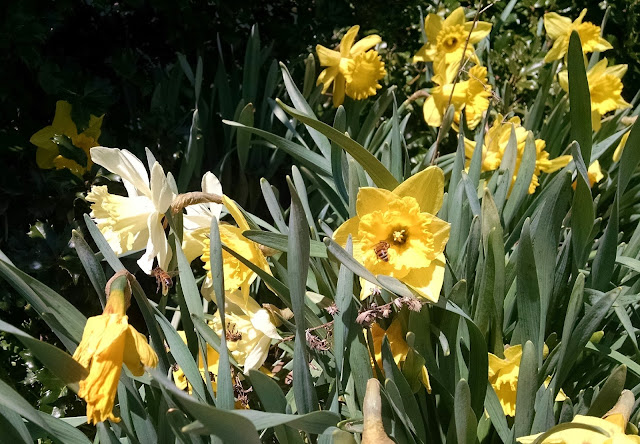 Since then we've gone backwards in the temperature department and had cold rain, fog, and last night a heavy frost although the day then turned sunny and crept into the 50s.

The other fiber progress is getting the last of the flock shorn.

Drambui (mom of Count Chocula, living the life of luxury at Equinox Farm in KY) is 13 this year and looking really good!  We have several other 13 and 12 (and 11 and 10...) year olds who are having a harder time keeping weight on but we'll get them on grass soon. 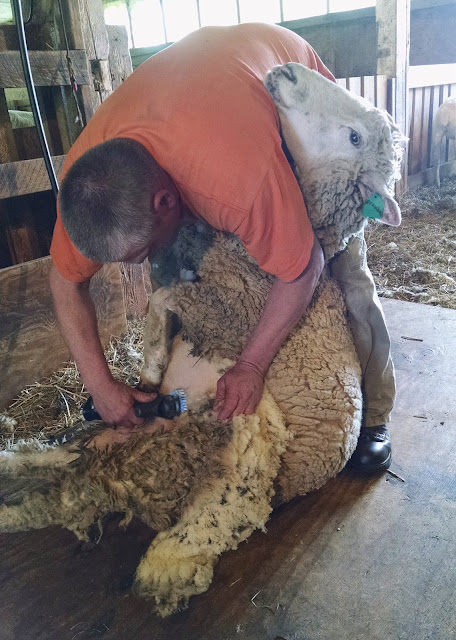 Peanut was in this group to be shorn and was not intimidated in the slightest by all the commotion. 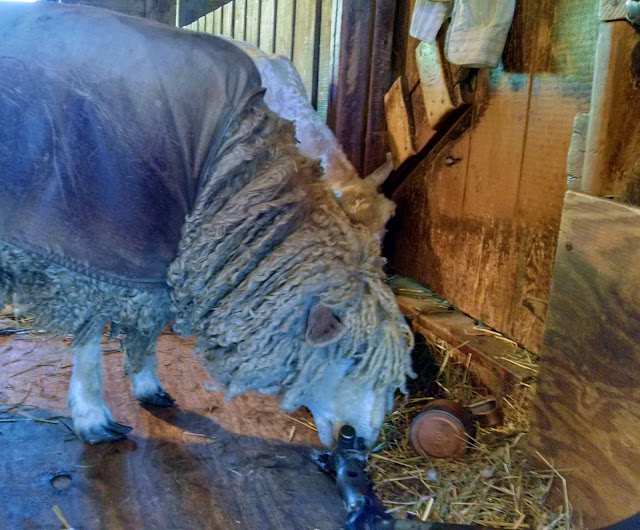 "I really don't see why everyone is so worried about this thing." 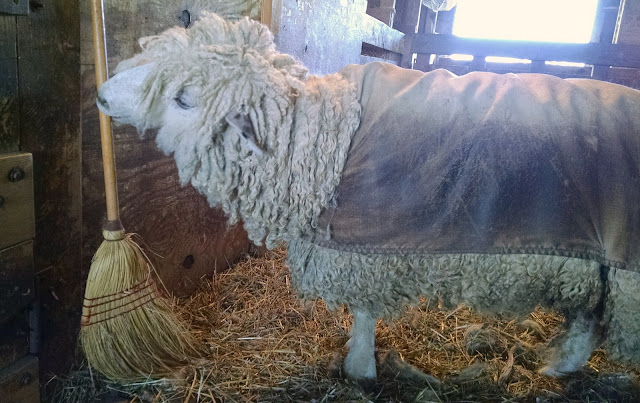 "C'mon, get the shearing boards swept before it's my turn.  I have to keep my wool clean."

The Cotswolds that we coated this year seem to have stood up well without felting.  I tried it years ago with some unhappy results. Maybe I just had a few individuals who have a greater tendency to felt anyway or maybe it was because I tried to coat all year rather than just the months of hay feeding season.  The curls are a bit flattened looking but there's no webbing between locks and I think the curl will reassert itself as the fleece is handled on the skirting table. 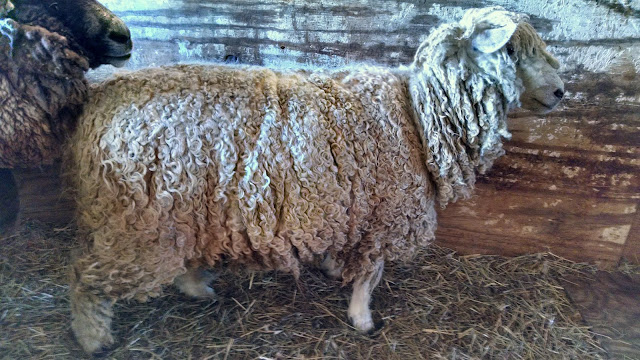 Next we moved up to the ram barn.   Here Brick has been done and is watching the next guy in line give up his wool. 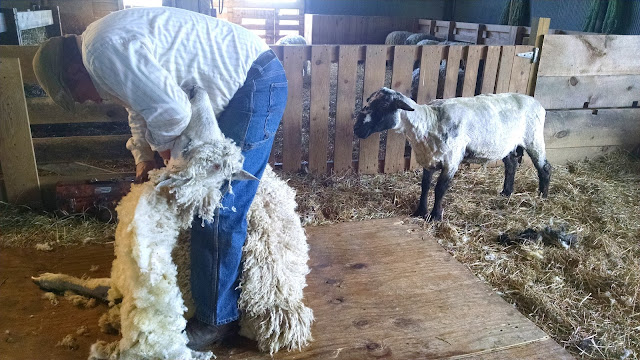 Two of our oldest rams are lighter than we like them to be but most are in good flesh and grass is just around the corner.  I had him leave the forelock on anybody whose dreads weren't too trashy, like Neville (white, already shorn) and Castillo, still unshorn and wearing his coat.  He's not a Cotswold but he has cool hair.  ;-) 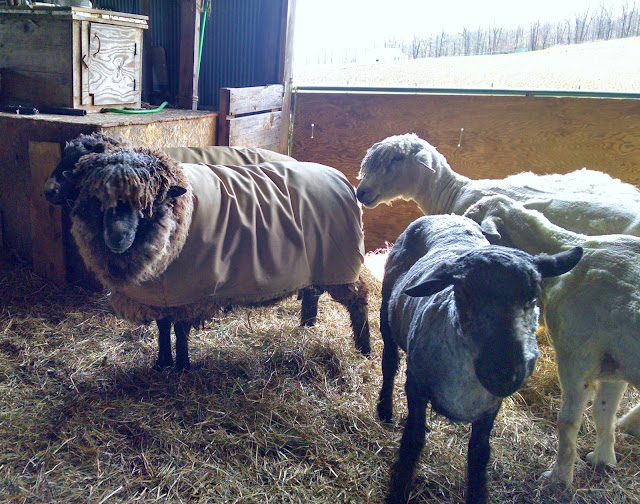 The most recent book I listened to on tape was The Host by Stephenie Meyer.  Here's the funny part - I had no clue she also wrote the Twilight series which was wildly popular but which never worked any magic on me at all so I never paid attention to who wrote it.  The Host was a very fun sci-fi story (IMO) with engaging characters, interesting details and a satisfying ending.  The person who read it was also well suited to the task (unlike an audio version of The Hobbit which I started but turned off after 20 agonizing minutes of truly awful interpretation.  Bleah.)

Joining in with Ginny...

Sheep are gregarious herd animals, and especially so when it's on the chilly side.  This is what we see when coming in to do morning chores.  There's a lot of cud chewing, some sleeping, some staring into space and thinking, all on a nice warm bedding pack.  The original heated mattress!

But someone is always standing on guard.  I don't know how they decide whose turn it is, but it's super rare that at least one ewe isn't up and paying attention (even in familiar, comfortable surroundings) when everyone else is relaxing.  This morning it's old Gem who drew the short straw. 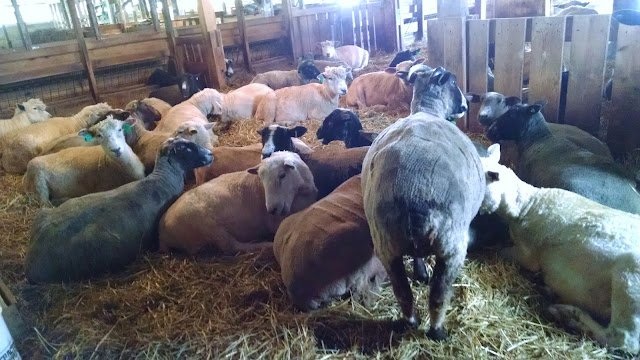 "Really?  You have to shoot me from that direction?  Do my horns make my butt look big?"

Notice she's got one eye cocked back at me.  Totally not alarmed, but going through the motions of being a good guard sheep.

Girls Just Want to Have Fun

A few days ago, before the return of winter temps, the newly shorn ewes were in high spirits.

And then everybody caught the bug.

"We're not weighed down by wool OR lambs!  Wheeee!"

Ugh, Not THIS Again

Last week lulled us into thinking that spring might really be here and if it did  happen to turn cold again it wouldn't be "that bad".  Well, wrong.  I should have known - years ago when I used to show sheep I'd be washing and trimming the week prior (yes, that would be the last week of April) with snow pack lingering in the sheep yard and icy hands from the wind and dreaming of being actually warm the next week in Maryland.
We had had another round of shearing scheduled for last Wednesday but the extended forecast looked pretty unpleasant for newly naked sheepies and we cancelled.  I'm SO glad we did. 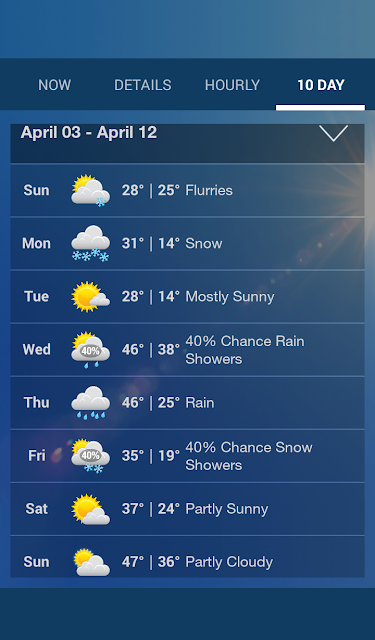 Even though we can close up the barn quite a lot  these nighttime temps guarantee a degree of misery we wouldn't want to subject anybody to.  The ewes that have been shorn for the longest seem pretty well adjusted.  The more recent batch aren't suffering but they are standing and chewing cud vigorously in a nice close crowd like a group of Navy SEAL candidates undergoing cold water training....except for the cud chewing.  ;-)

They grumbled about going out to the bunk while we filled their feeders this morning. 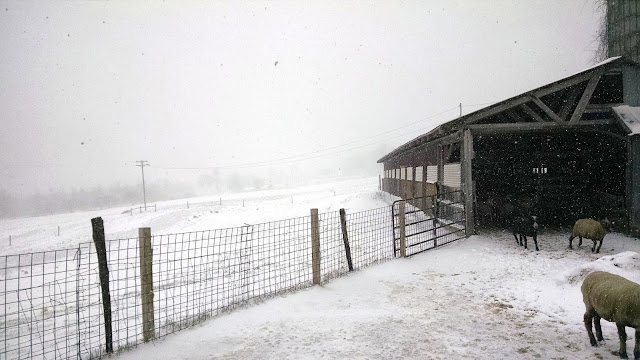 And stampeded back in a few minutes later when Andy rolled open the big door. 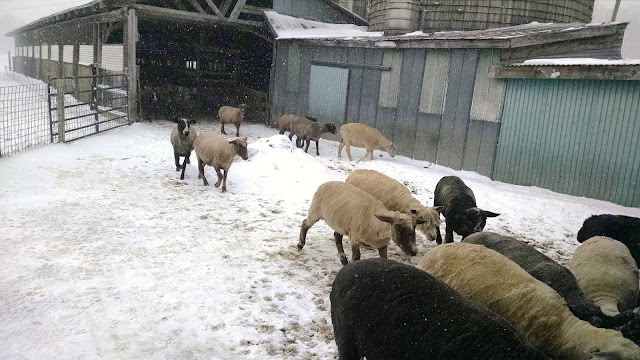 Even Holly didn't want to go tromping off into the pasture this morning.  She was content to sit and watch the snow devils swirl through the lowest field. 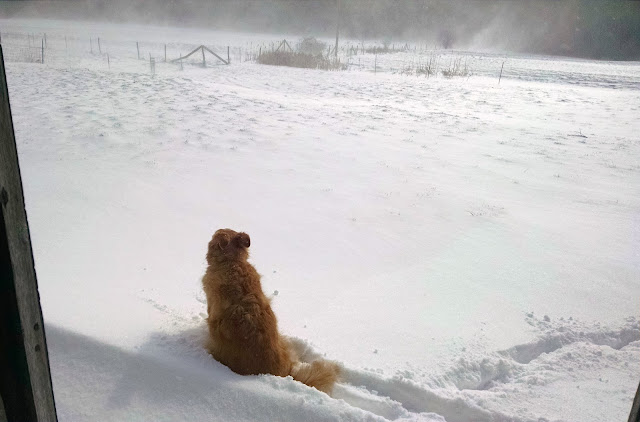 This too shall pass, but I'll try to watch it go by from indoors as much as possible!
Posted by Sheepmom at 11:43 AM 2 comments: