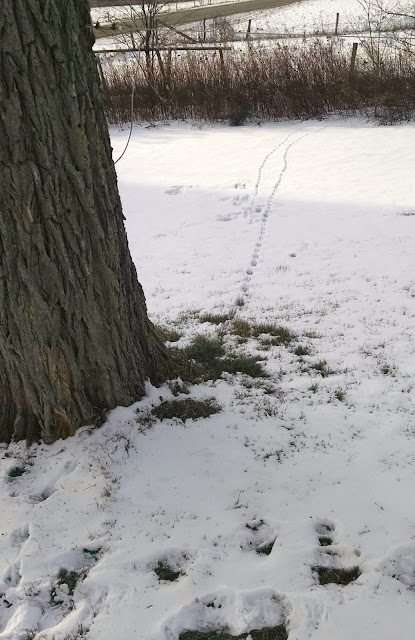 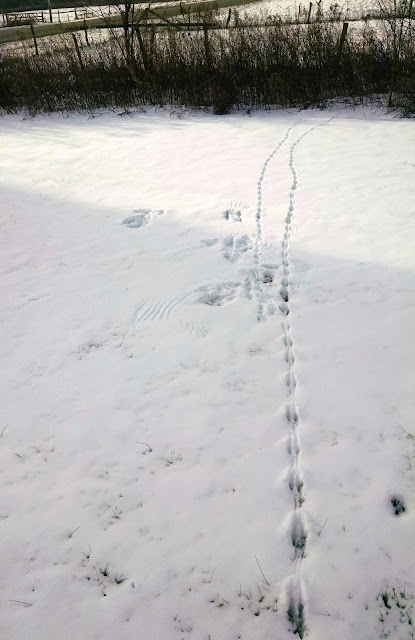 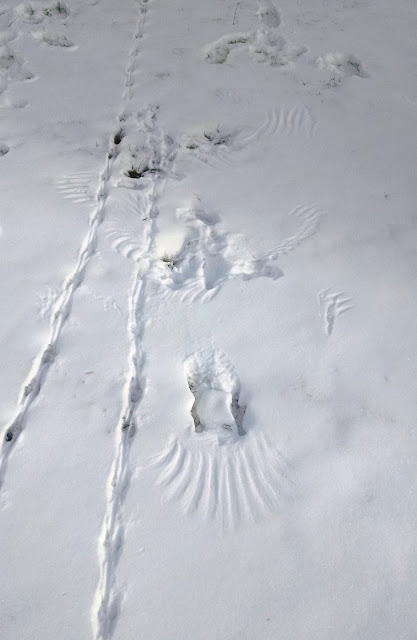 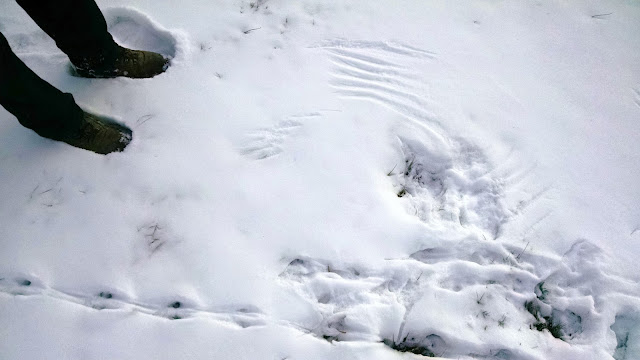 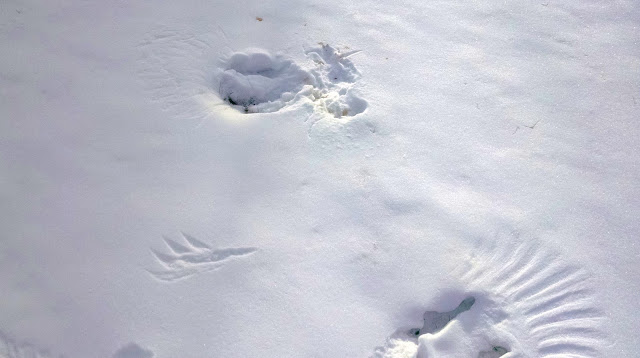 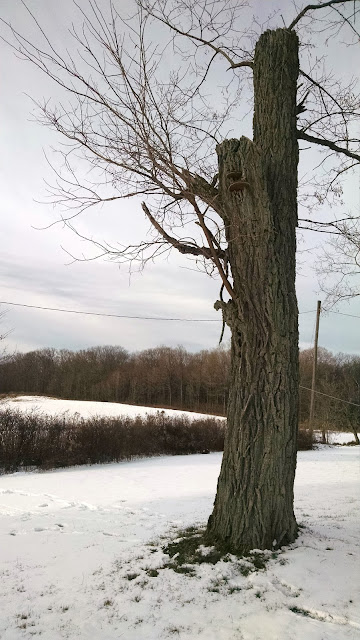 Thank you, good owl of the north, for ridding us of a basement rat!
Posted by Sheepmom at 6:45 PM 10 comments:

We're planning to put coats on some of the Cotswolds tomorrow, check eye scores and weights one last time before going into winter and probably separate the oldest ewes into a group that can get a ration of grain once a day.  To that end I gathered a few sheep coats that needing mending, set up the sewing machine and realized I didn't have the scissors handy.  A two minute search ensued and when I came back into the room....... 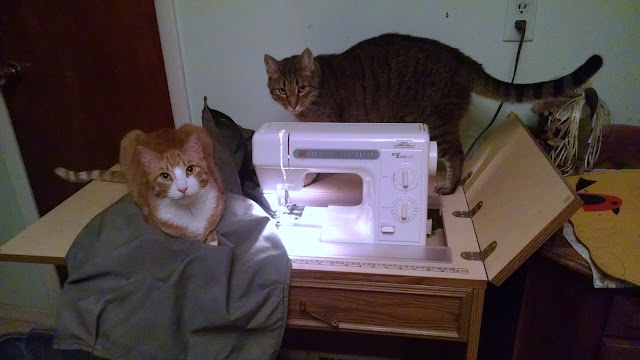 Dexter and Calvin, ready to help.

Cats.  You can depend on them to appear when you least need their assistance.

Starting The Year With Three Days Of Cleaning

Did you think I meant the house?!?!

Three days here would certainly help but I meant the barn.  The big fall clean out didn't have to happen in October because we didn't have to set up pens for breeding groups.  Adding uneaten hay stems from the mangers every day kept the bedding pack clean and lovely but it was getting pretty deep.  The delay (and outstanding weather) did allow Andy time to get all the firewood we need for the winter in the basement and near the outside boiler, so it was a worthwhile trade-off.

He did get the large eastern section of barn cleaned last week.  Over the last three days he's been able to clear the long, main part in thirds each day.  While working (about 5 hours each time), the sheep shared cozy quarters in the clean area and a small pen in the bunk where the Picnic Table is.

There was some "close talking" while they waited (Fuzz and Bacardi halfheartedly banging heads in the middle). 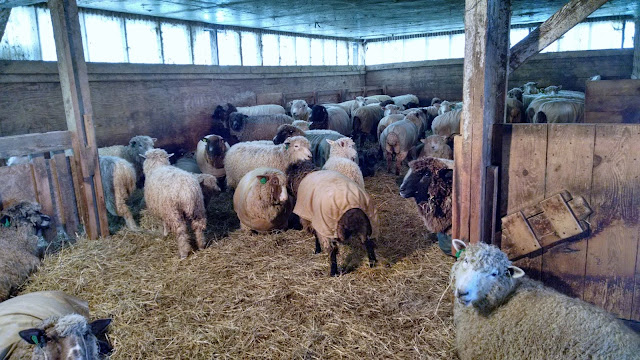 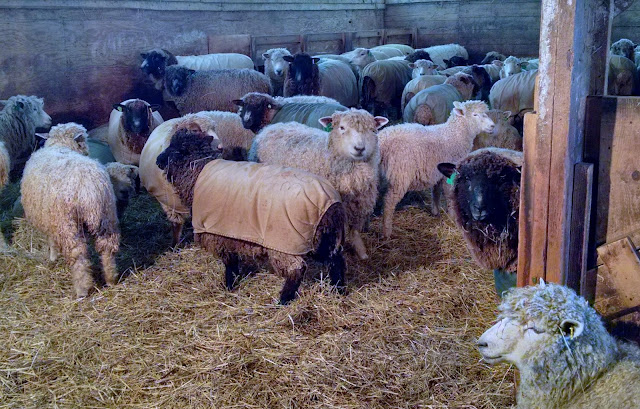 "You saw that, did you?  Some girls just shouldn't be roommates."

And some watched Andy through the gate going back and forth with the skidsteer. 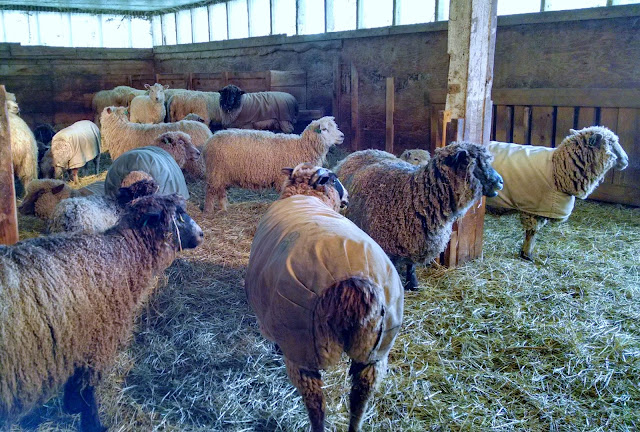 First he had to move the hanging fan. 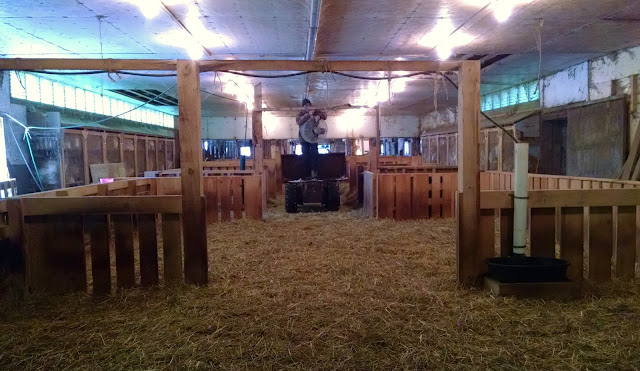 Then he could get started.  Drive in, scoop as much as the bucket would hold, back alllll the way out, turn and pile the litter on the far side of the feedbunk.  He'll start taking it out with the spreader as soon as the temperatures moderate in a few days. 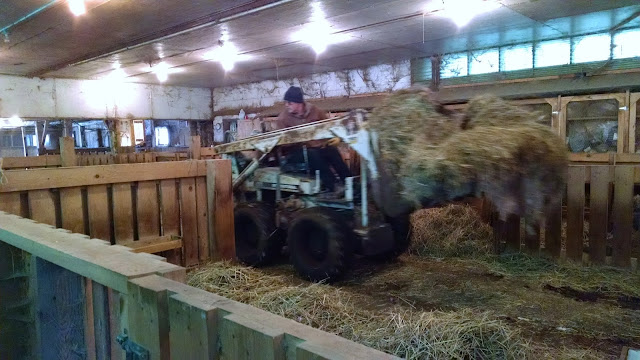 While he's been working during the day I've been in the wool shop getting some fleeces skirted.  Here's Gilly's fleece ready for our booth at Roc Day this coming Saturday.  She is a soft and supple gray Cotswold.  Although past middle aged and giving up a little length the locks are still 5+ inches long. 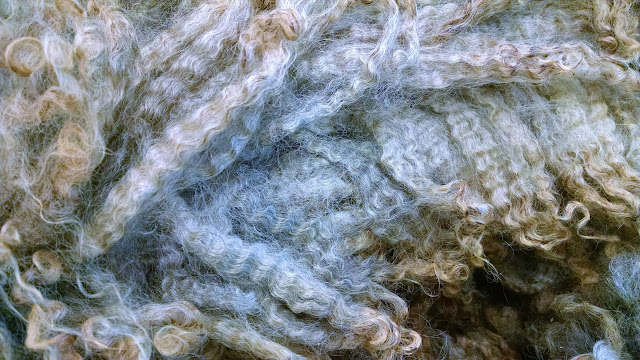 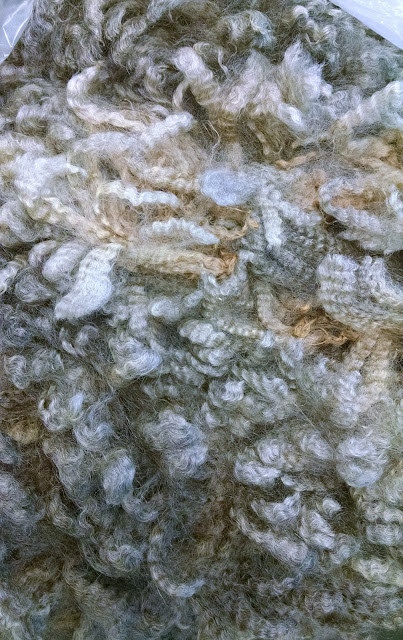 The big rams are officially off pasture now and getting just hay twice a day.  When we get deep into the real cold of winter we'll add a small grain ration so they don't lose condition.  The oldest boys are eight this year and if keeping a healthy weight is going to become a problem it will certainly show up when they are dealing with low temperatures. 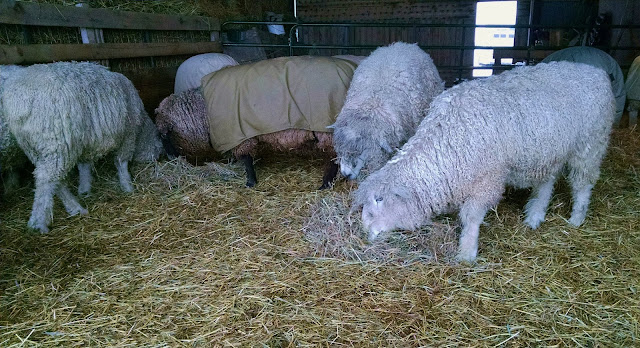 So far, Neville the Cotswold (far right) seems to be handling the coat he wears without any webbing happening in the fleece.  I'm keeping my eye on it. 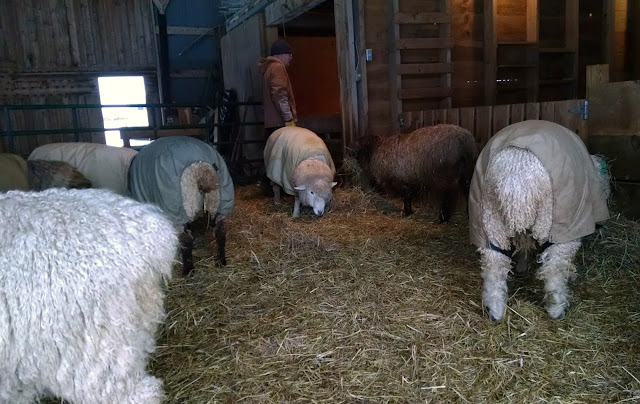 And true to our promise we turned Peanut out of her sick pen on New Year's Day (and put a coat on her too, since her fleece is so pretty and clean).  She's standing kind of weird here - came from one direction and trying to decide if she wants to go back that way or not - but there's no lameness and she spent some time the first day ripping back and forth with the lambs just for the fun of it. 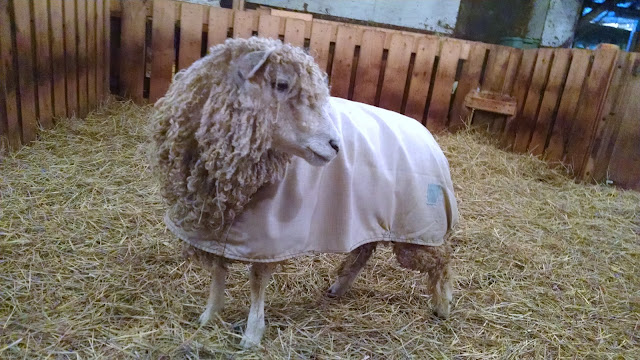 Definately starting the year on a good note!