Apparently It's Going to Be a Good Year

Because this must be a good omen, don't you think? 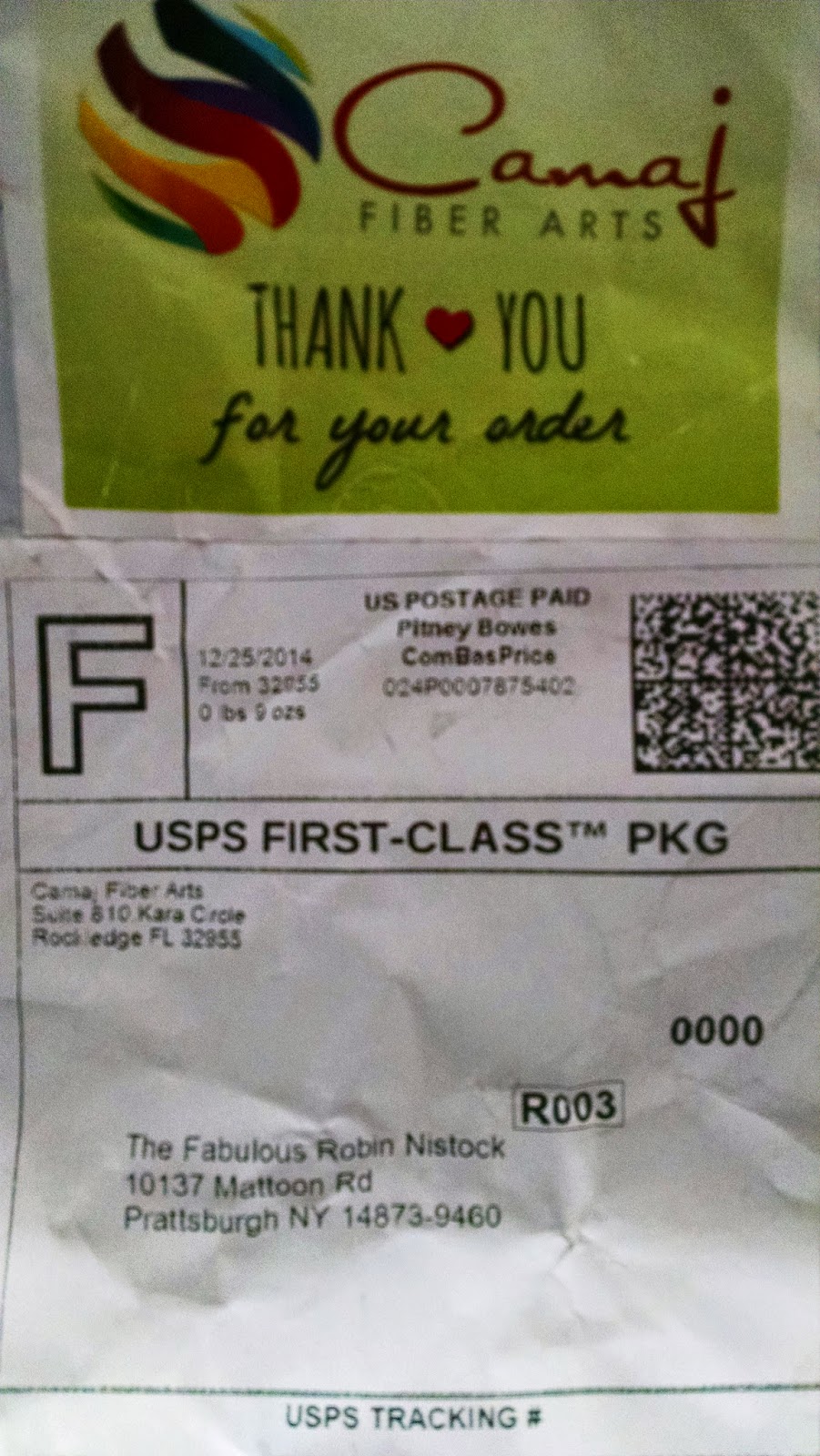 ﻿
This makes me giggle every time I think about it.  Thanks, Camaj Fibers, for having a smart marketing department that made my day!

Email ThisBlogThis!Share to TwitterShare to FacebookShare to Pinterest
Labels: silliness

'Fortnight' sounds so much classier than 'two weeks'.  I'm always impressed to see other people blog daily or almost daily and make meaningful, interesting posts to boot.  Two weeks of gray weather here hasn't helped and we haven't been doing anything especially photogenic on the farming front.  I did manage to get some wool ready and sent it off for processing. 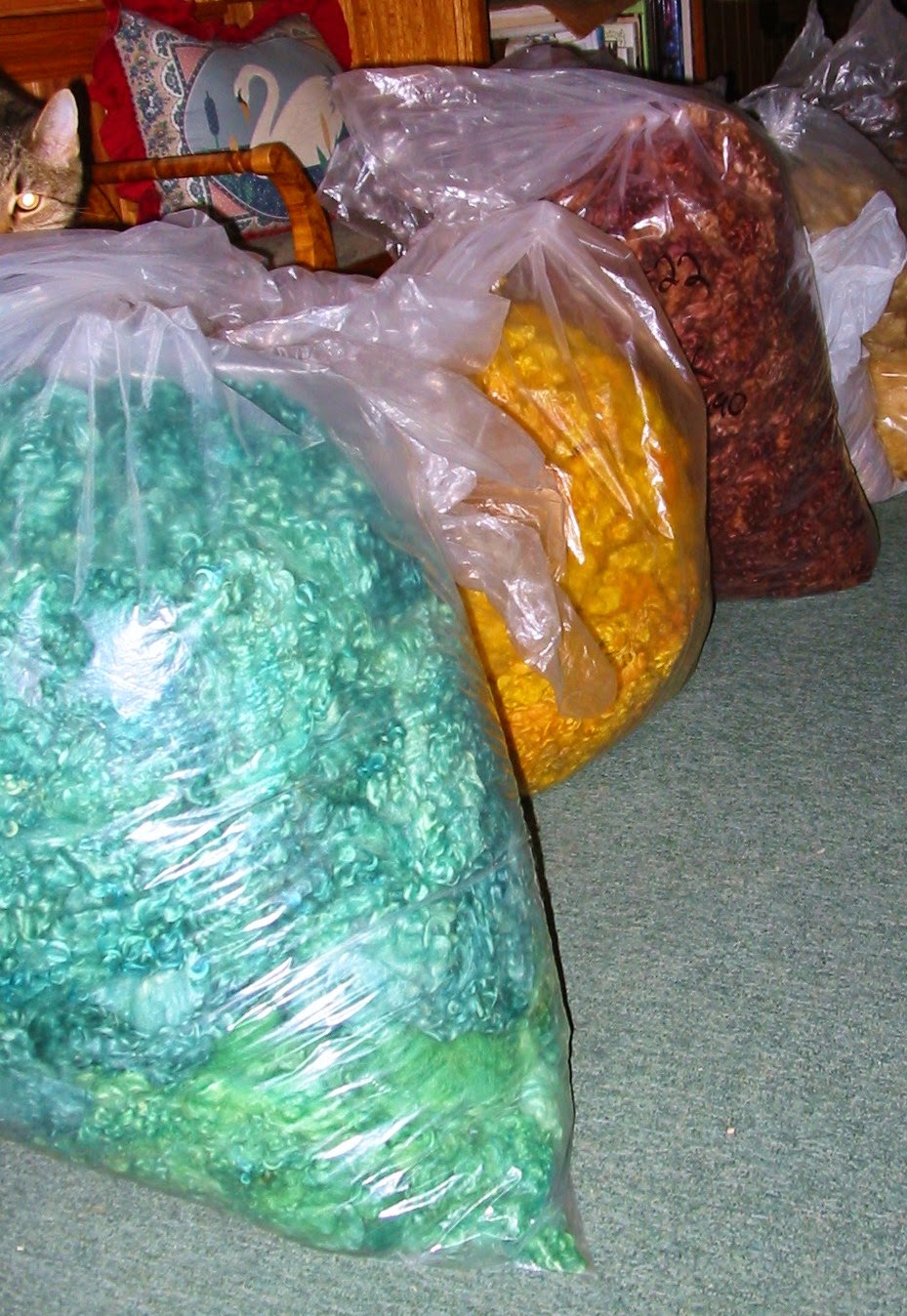 And some natural colors - white Bunny and Gooseberry and two shades of gray - Tux and Mojito. 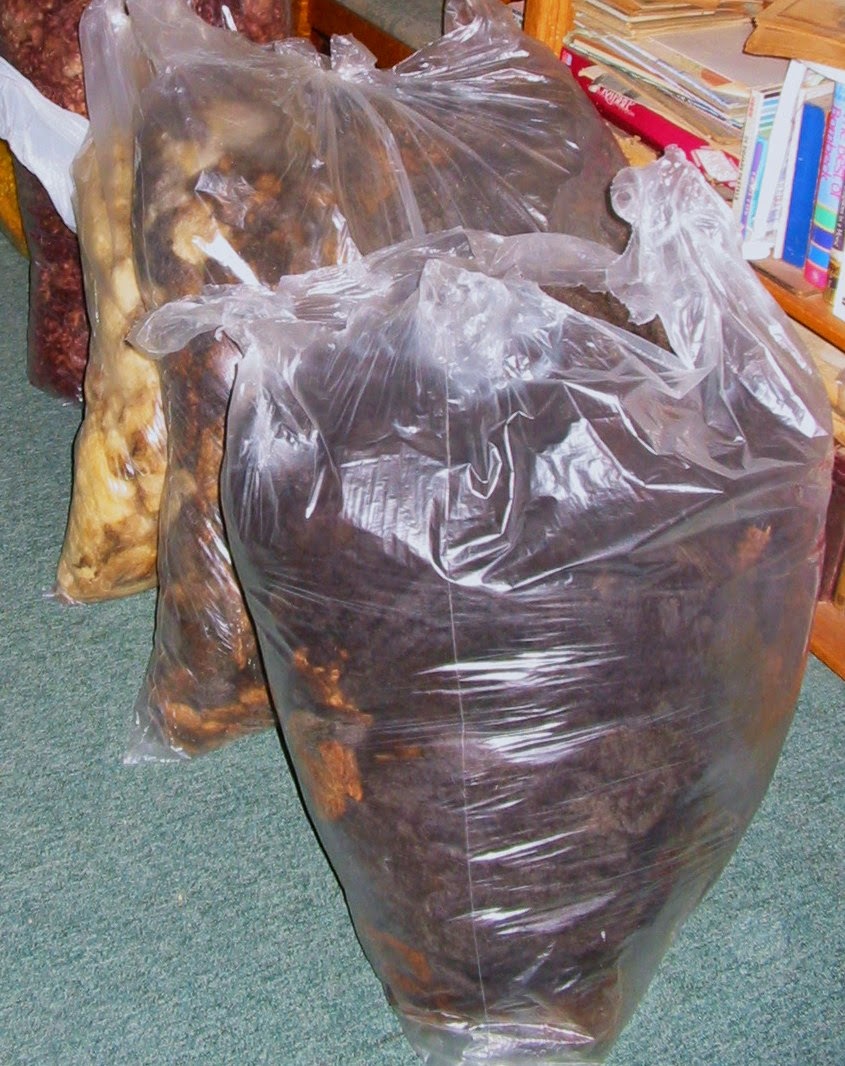 I skeined, washed, dyed and reskeined the last of the 3-ply sportweight Cotswold yarn I had milled earlier in the year.

We had a great spinning guild meeting with a fibery Secret Santa gift exchange wherein you bring nice spinning fiber wrapped in a festive manner and then you get to pick a gift based solely on which packaging strikes your fancy.  Some participants employ the reverse psychology method and go for the plainest wrapper they can think of, but all fiber is super yummy and selected by a spinner for a spinner so there are no losers!   Some stealing is allowed and the most coveted boxes changed hands several times until all was settled. 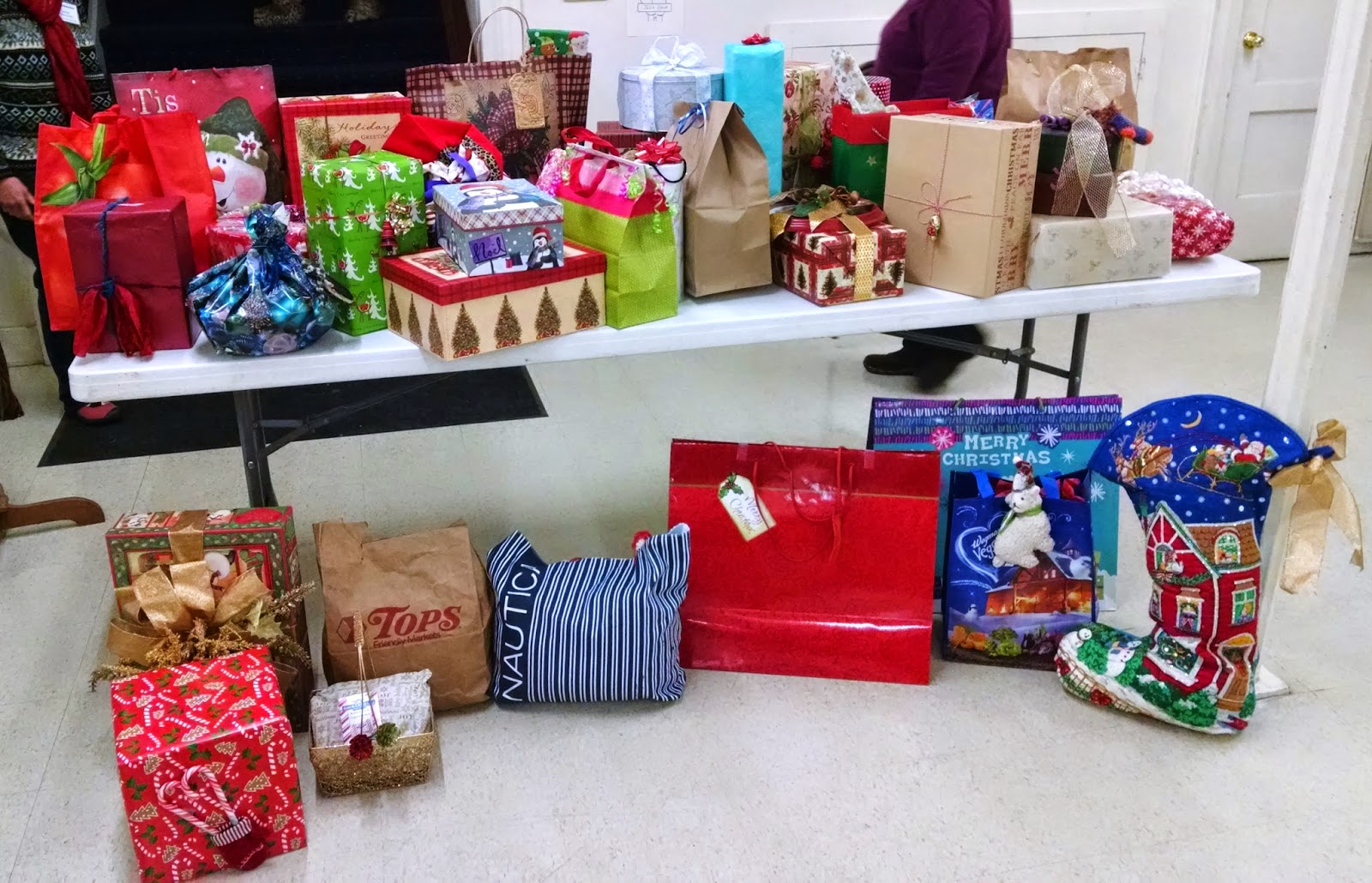 I wish I'd taken a picture of the sparkly batts I made on the big drum carder as contribution.  Duh.  :-(
But I received two lovely coils of hand dyed BFL roving in two slightly different blue colorways.  Yay!  Even the bag is fun - the pattern is knit stitches! 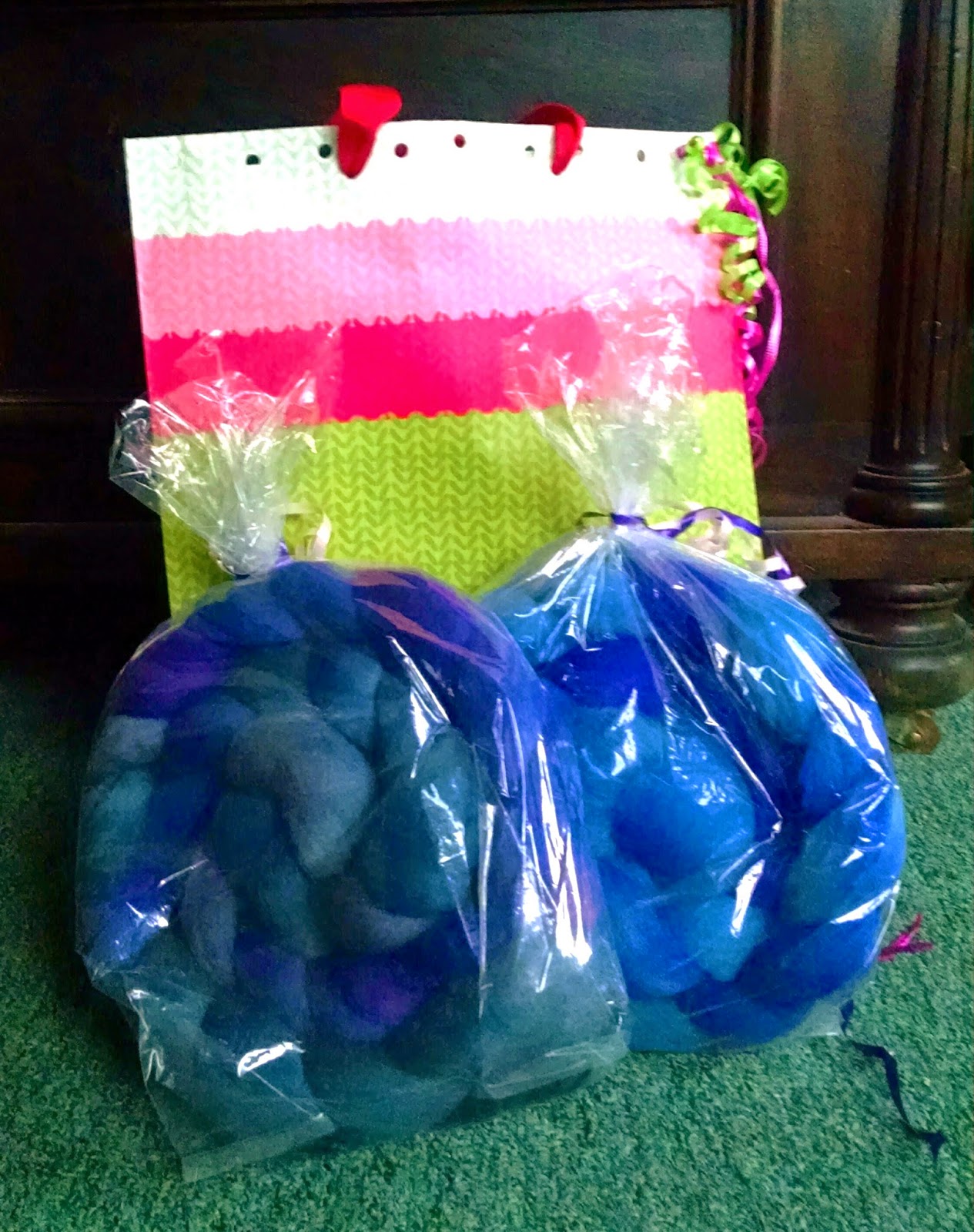 ﻿
﻿
﻿
And while Christmas preparations have kept us busy we can always count on the routine of daily chores to keep us focused.
Kittin has grown into a very pretty kitty.  She's also growing into a rather spherical shaped kitty.  This will no doubt change when winter is over and she ventures out and about more.  She's a bit of a couch barn potato in snowy weather. ;-) 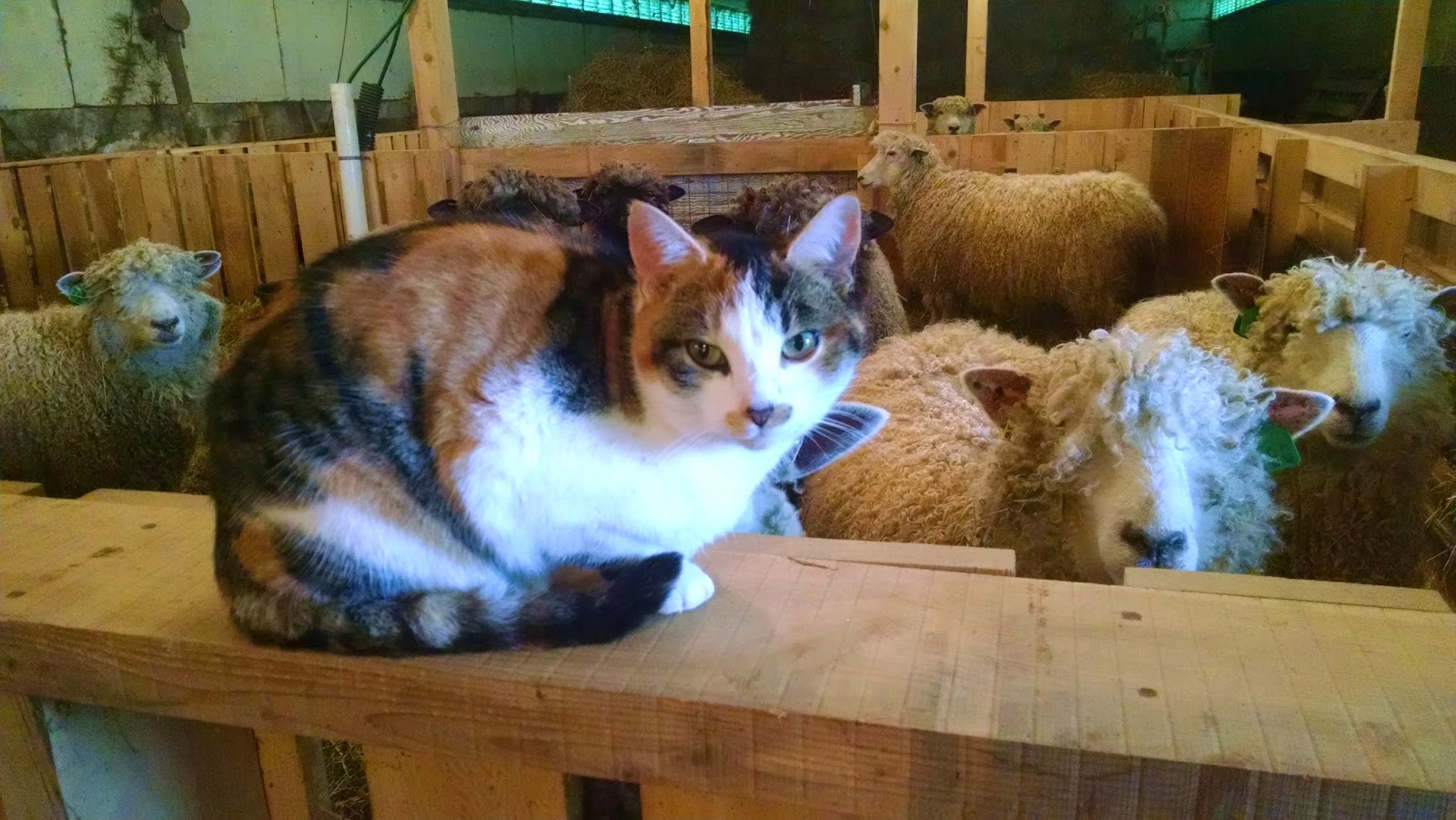 ﻿
She's also become enamored of the sheep and likes to have them breathe on her and give neck nibbles. 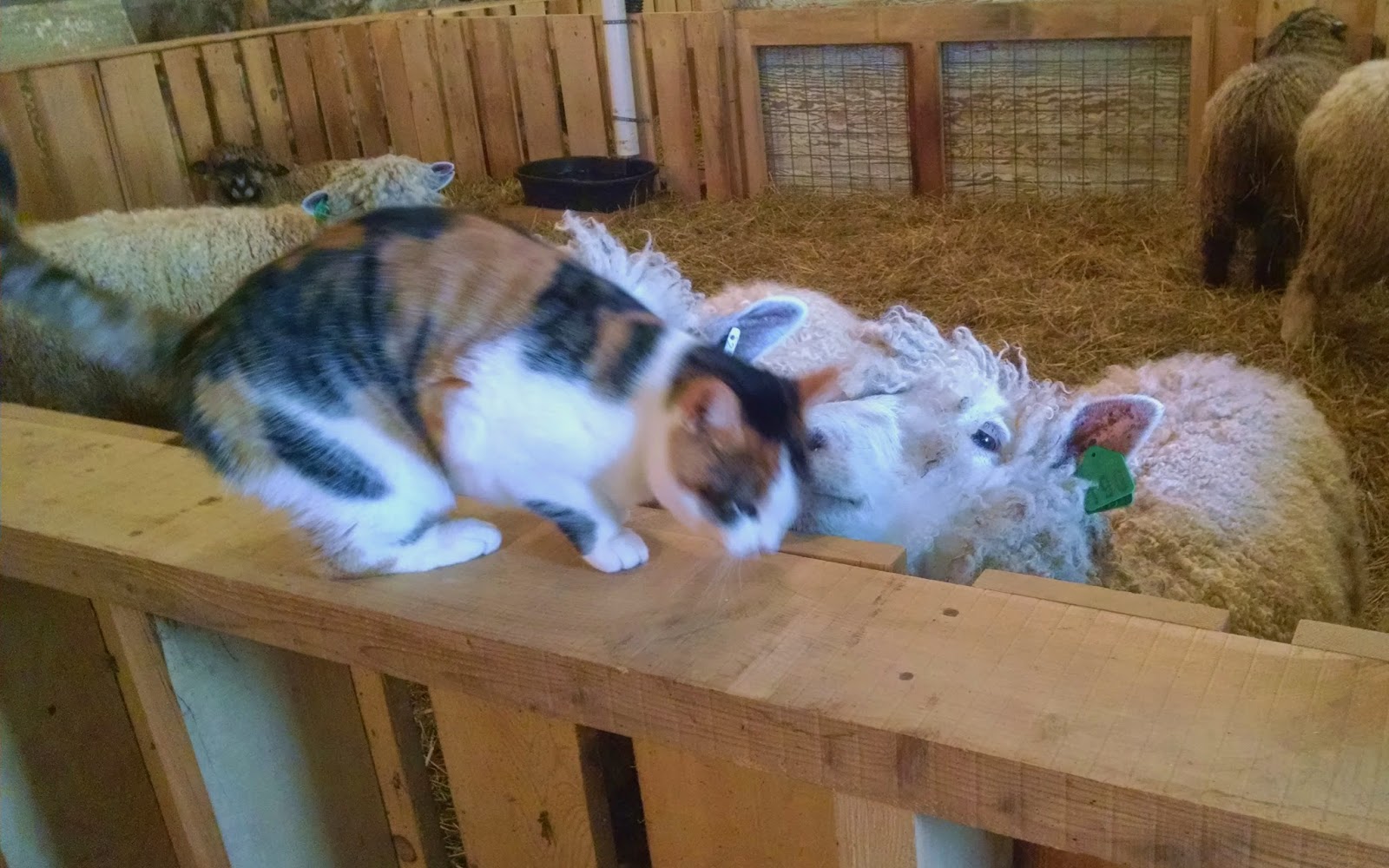 The sheep really didn't like me taking a video.  I guess they thought that if I was standing still looking at them I must be Plotting Something so they kind of each decided one by one that they had somewhere else to be. 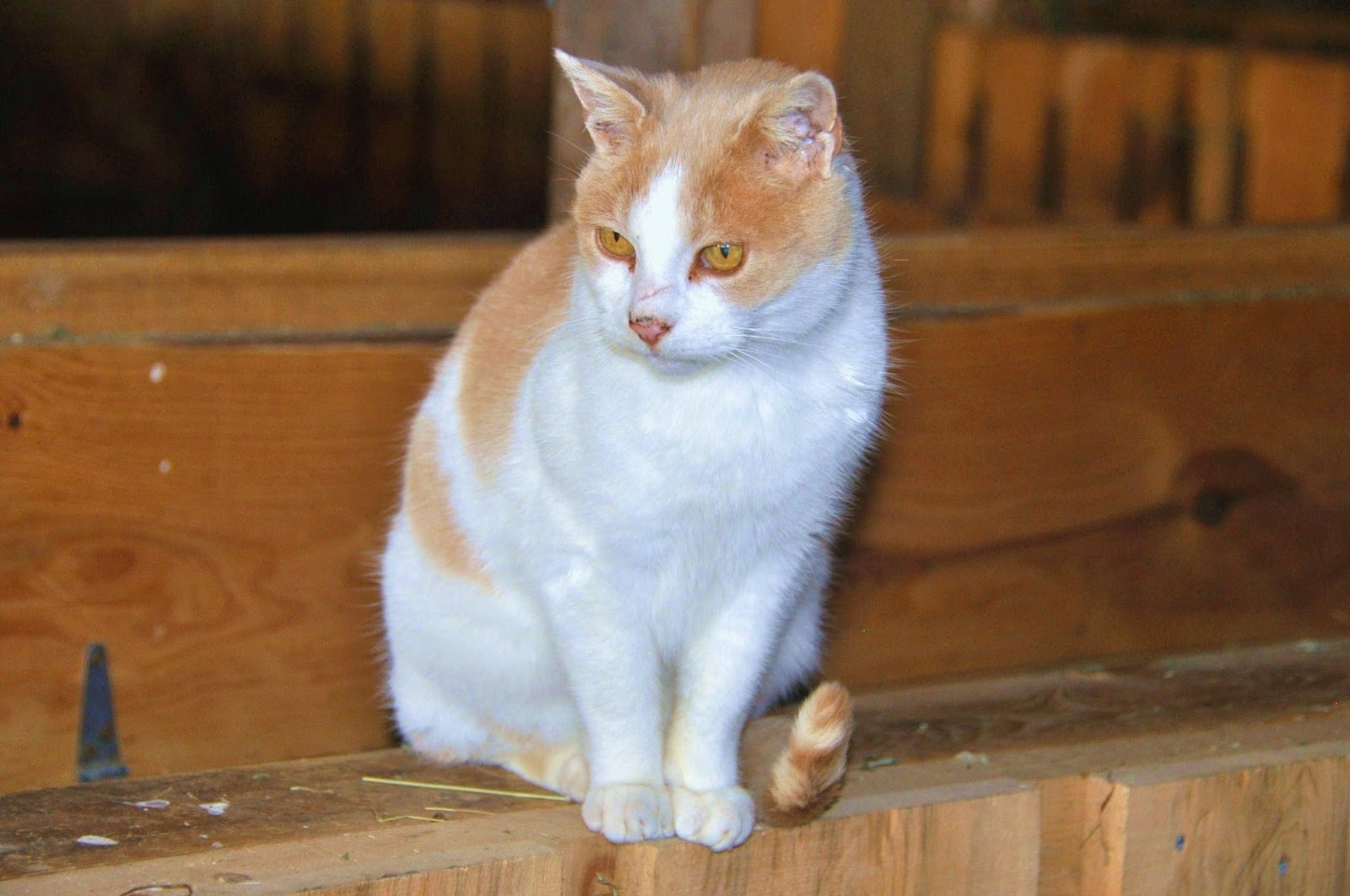 "I just don't know what she sees in those sheep.  She should be out hunting mouses.  Kids these days..... into some crazy stuff."
Best wishes for everyone to do whatever you're 'into' this holiday season!
Posted by Sheepmom at 2:14 PM 2 comments:

Sunny, With a Chance of Naps

After yesterday's ice, rain and overall dreariness a full day of sunshine felt like an early Christmas present!  It was still cold, never getting above 25 degrees but if you're a sheep wearing wool it doesn't matter a bit.

The big rams have settled down quickly and we released them into a larger pen since they didn't seem to be in danger of damaging each other.... at least, no more than usual.  After all, they ARE rams and will butt heads just for the fun of it.  Except for some token swearing and shoving (them, not us) at chore time they are pretty mellow.  Cotswolds Ike and Ian are using the old wall-pillow. 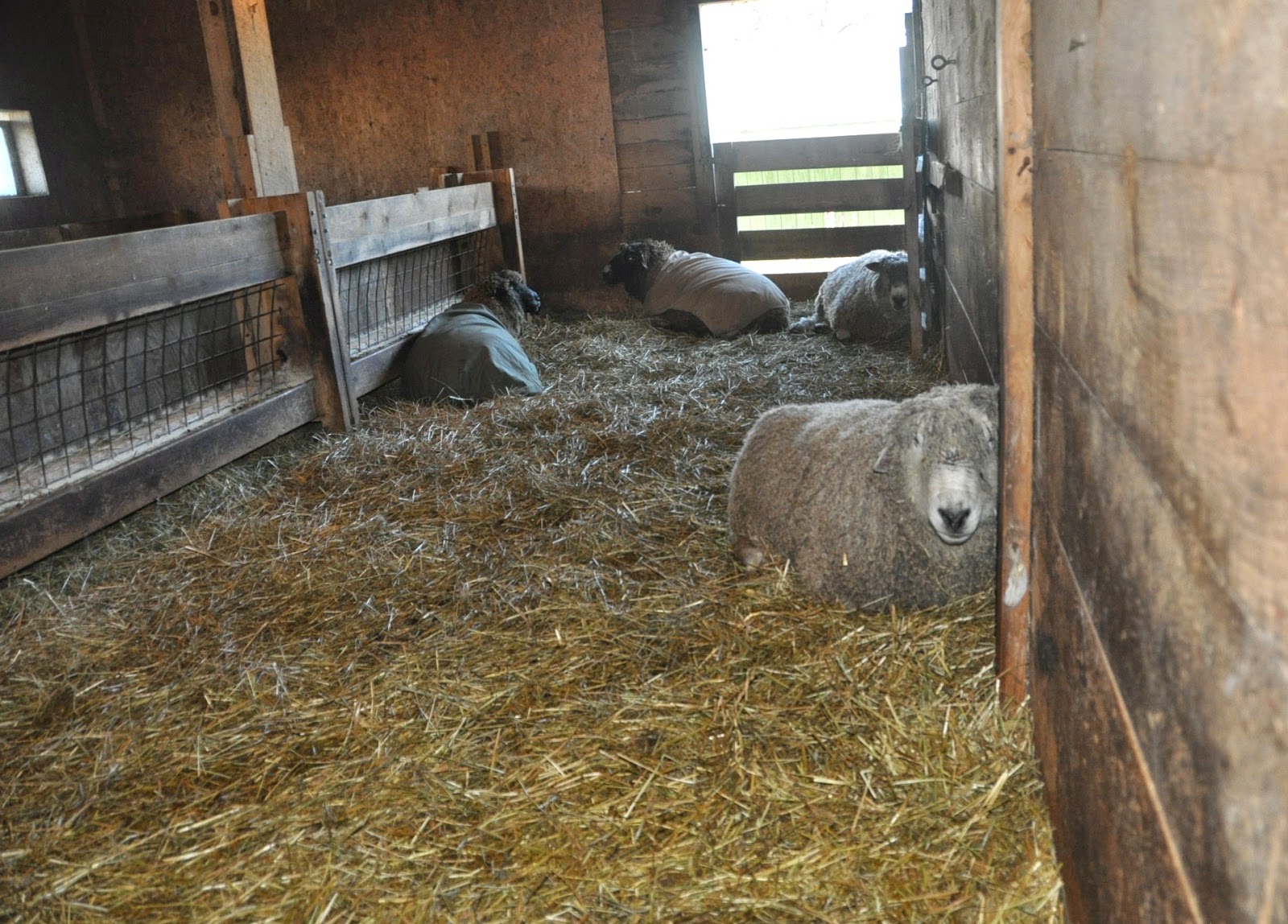 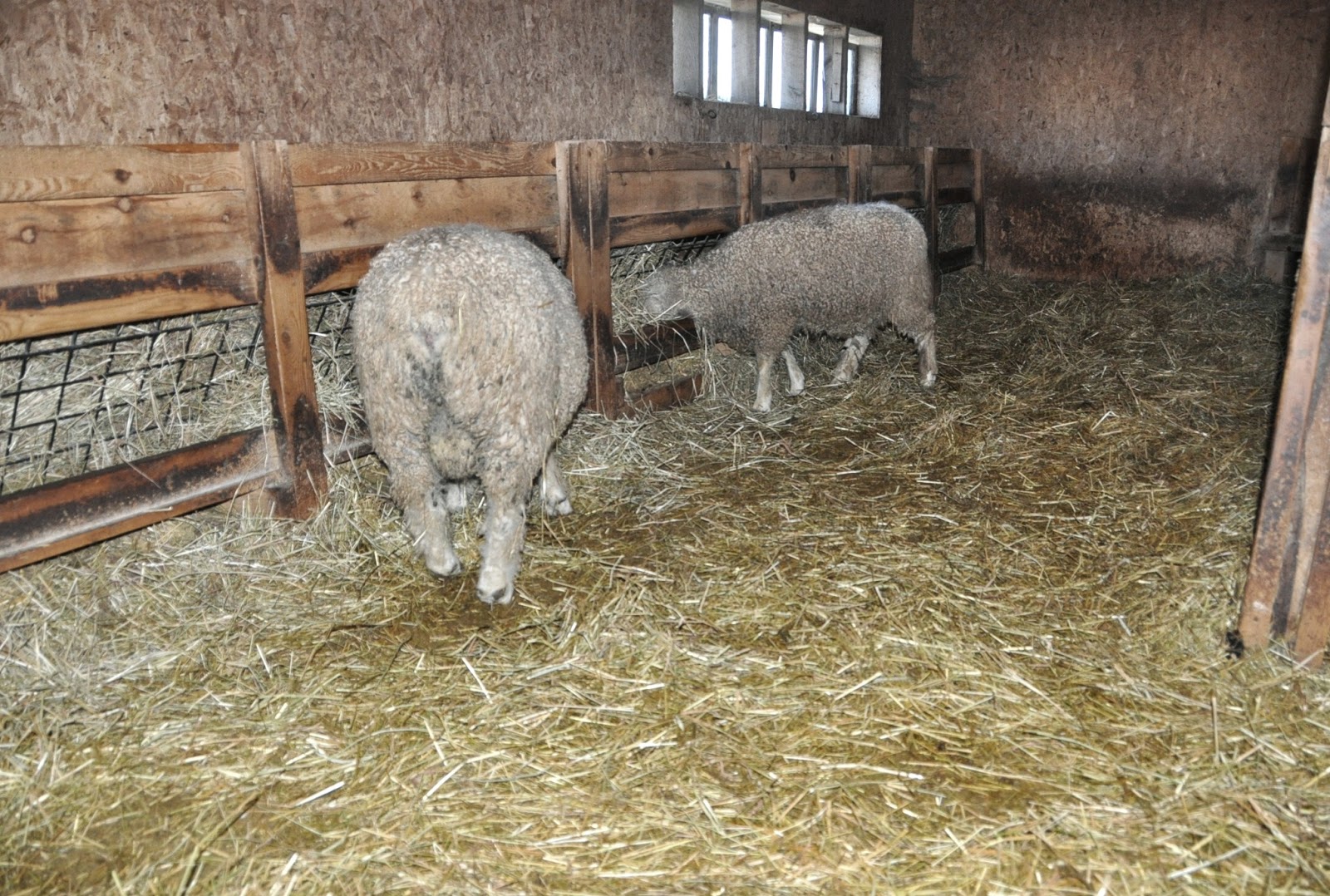 Nigel carries a color gene and has a heavy but silky handling fleece that I really like.  The curls are large but well defined and not coarse feeling.   He's registered in the more recent Cotswold Breeders Association which recognizes purebred colored Cotswolds.   I'm looking forward to some pretty colored lambs from him in the spring. 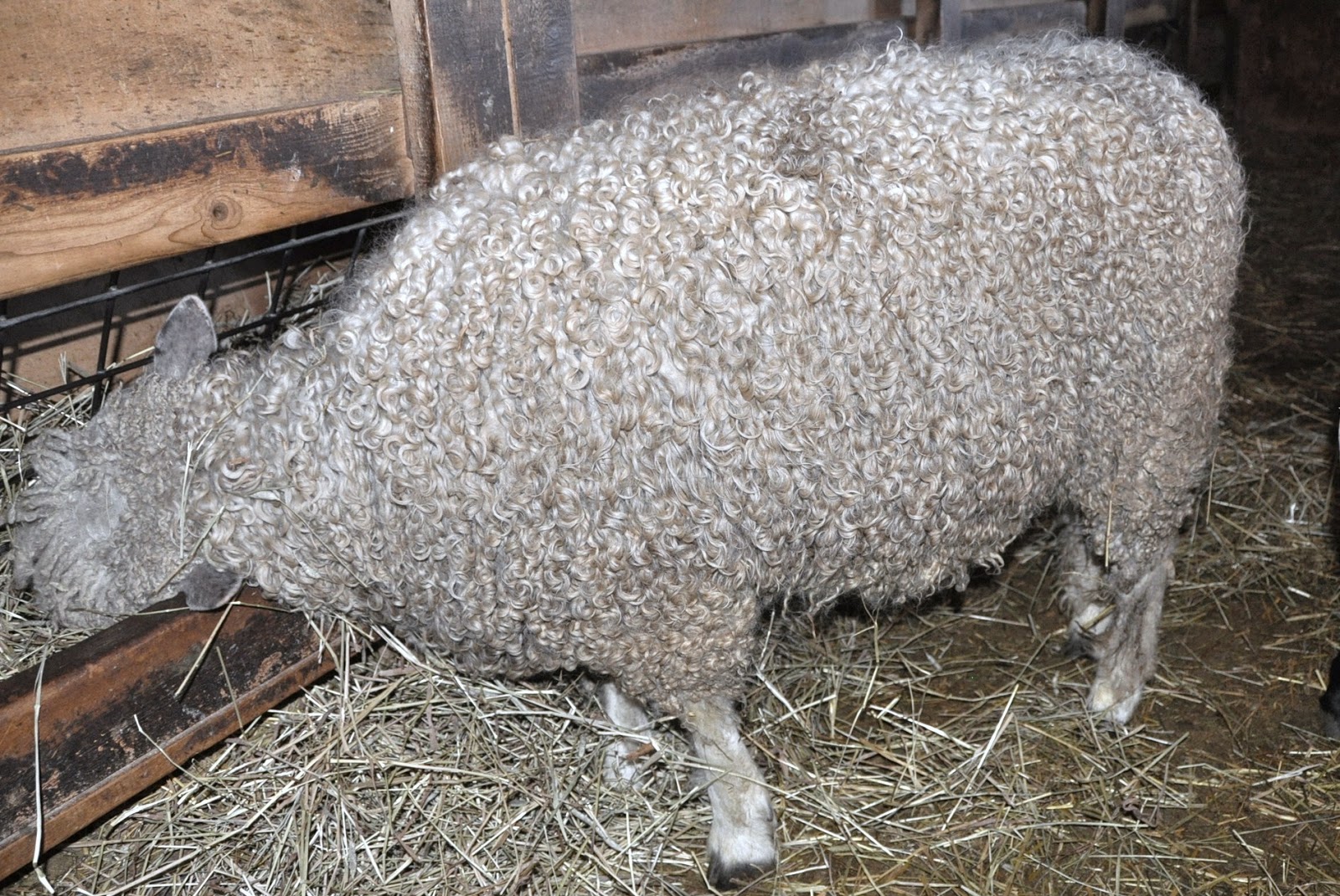 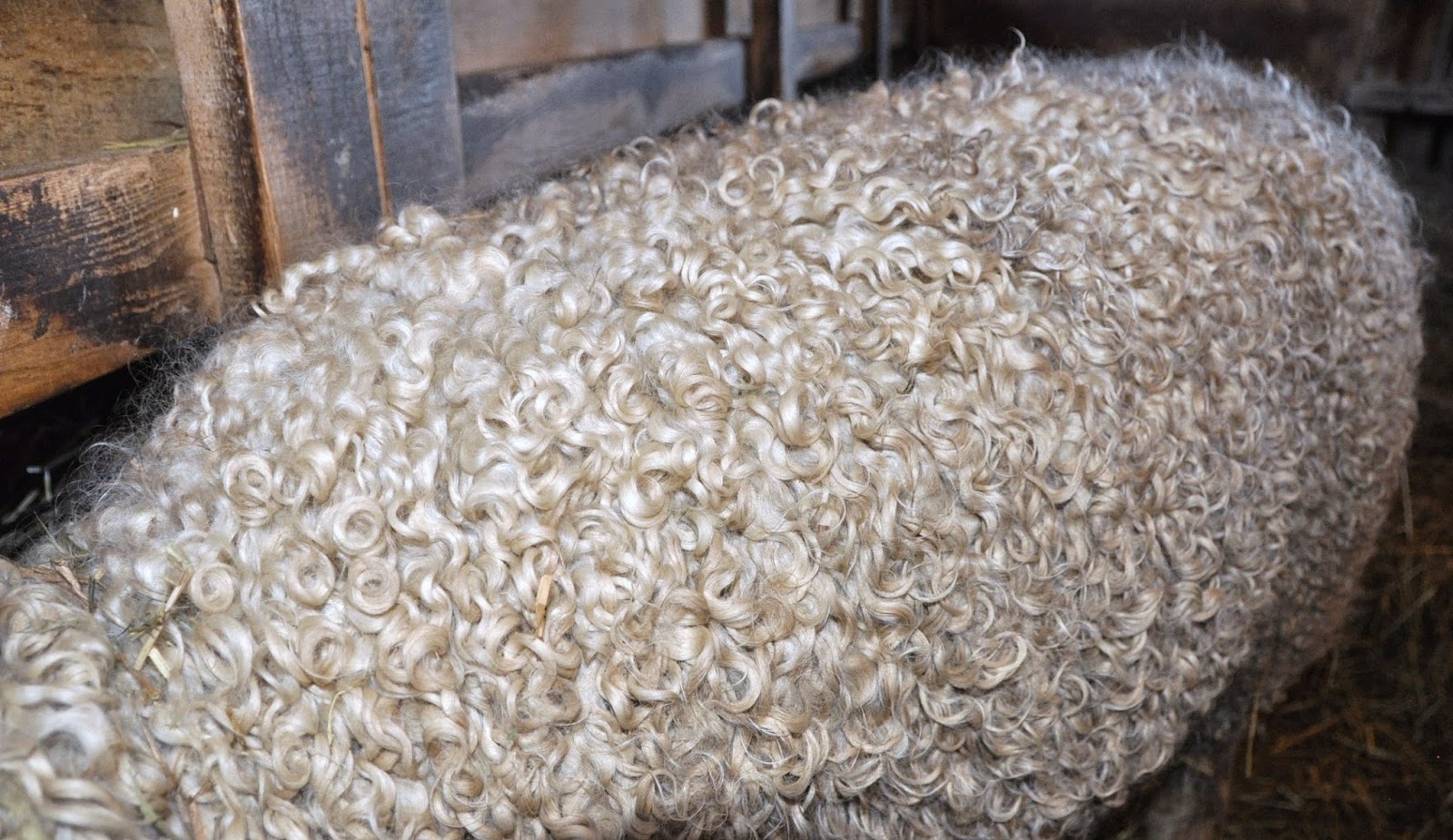 He ripped out his flock tag last fall and I will replace it next time we're catching everyone to do some task or other.  There is no danger of mistaking him for anyone else as the other rams are all older and/or tagged.
﻿ 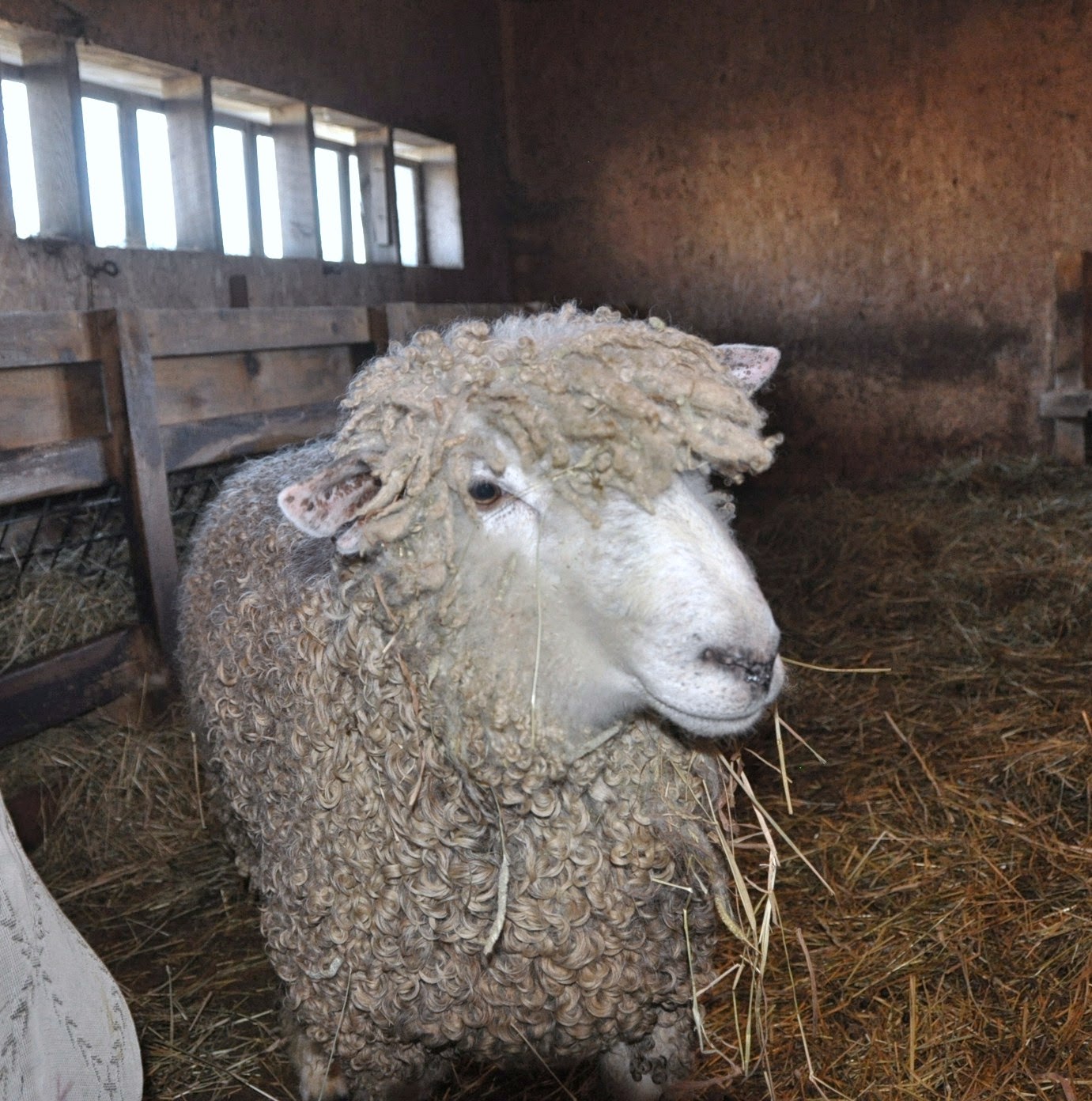 "That's right - I'm ME!"
Our other yearling Cotswold is Neville.  He's in the original Cotswold registry (American Cotswold Record Association) which doesn't allow any color so he will only ever produce white lambs. 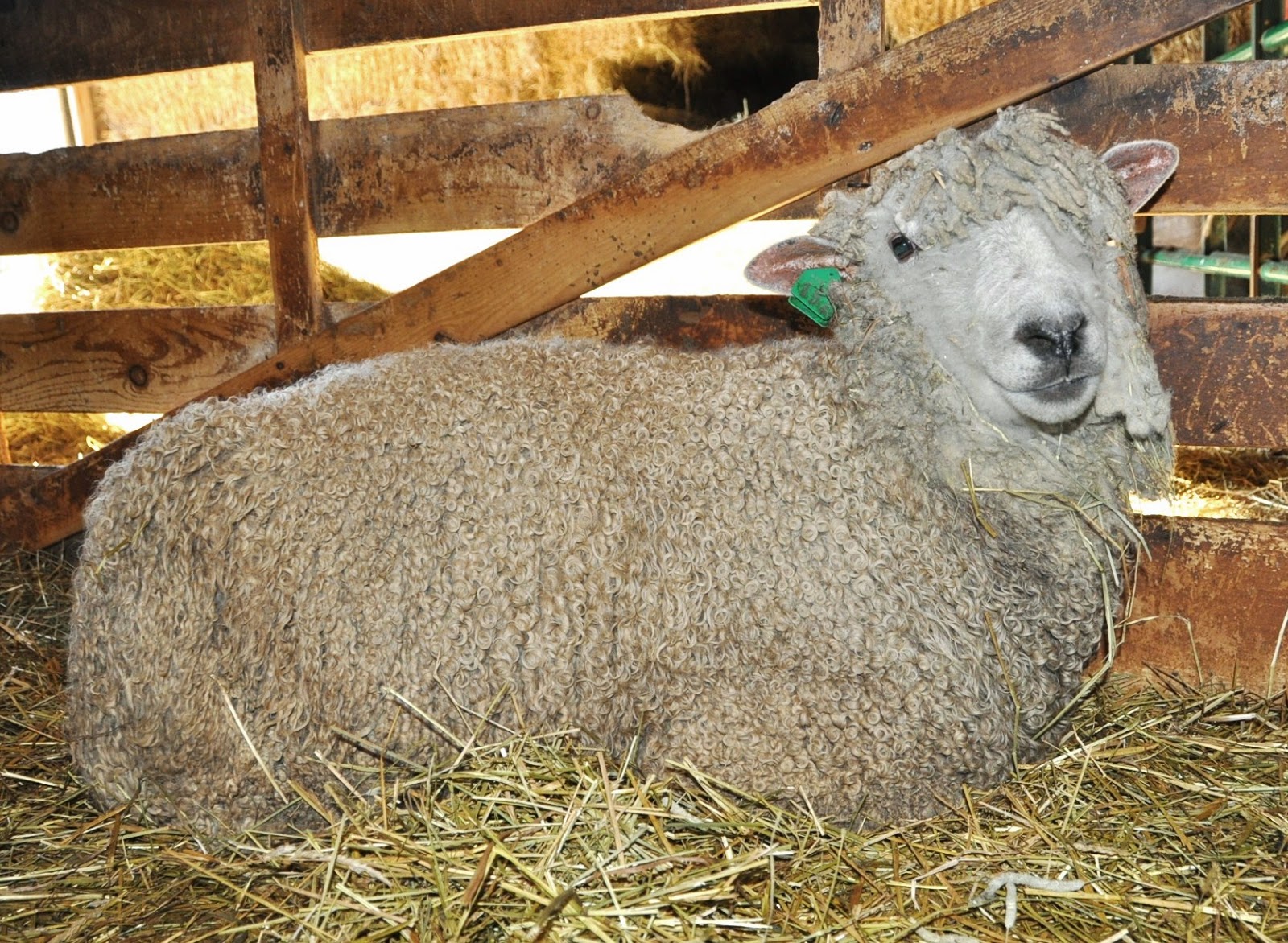 ﻿
His fleece is quite different from Nigel's in that the curls are very small and tight - 'pencil curls' or Shirley Temple curls as I call them.  His fleece is also lustrous and on the fine end of breed standard.  I plan to have samples from these two guys' fleeces micron tested this spring just to see where they stand.
Curls over his shoulders..... 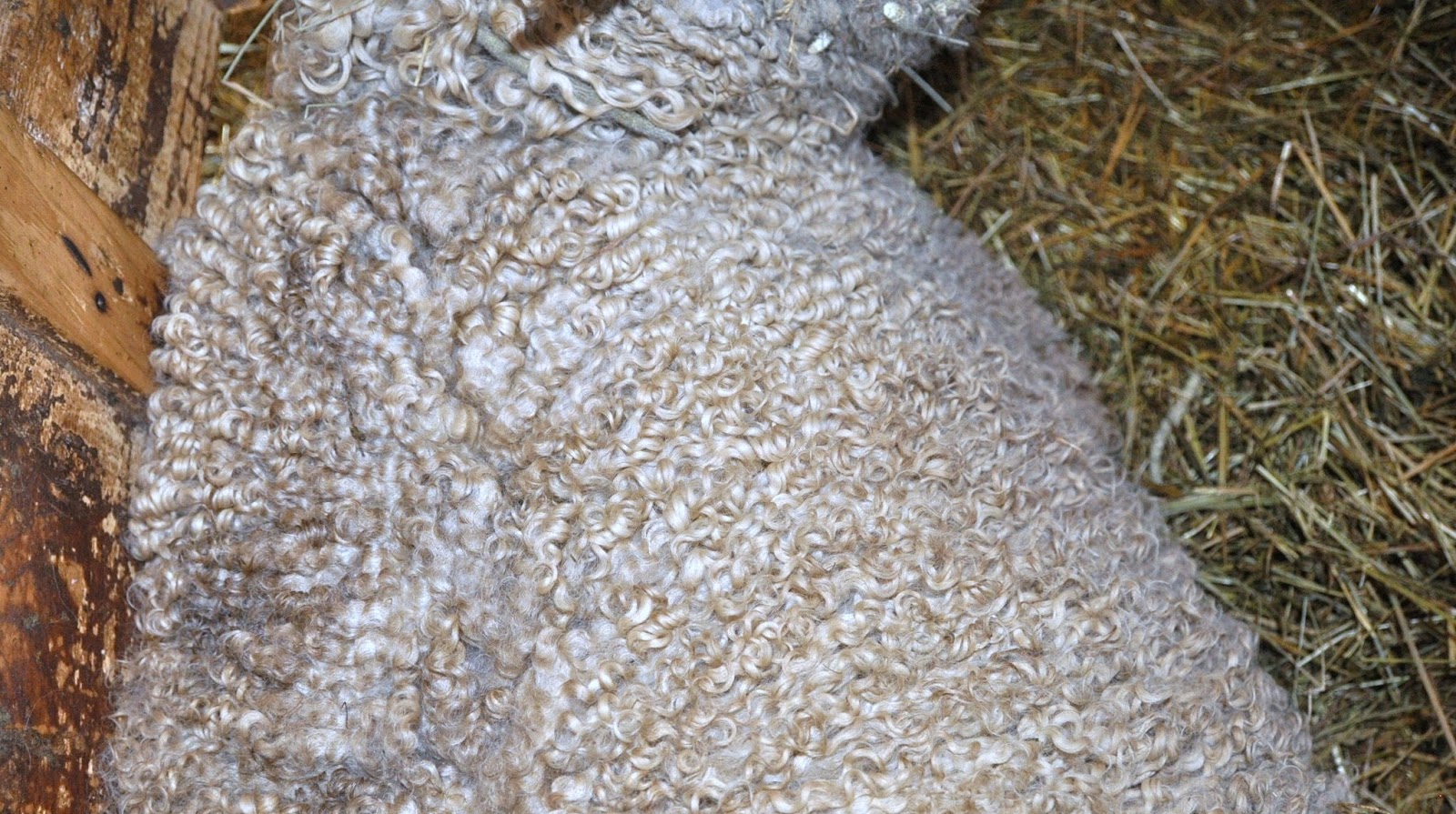 Closer up from the side... 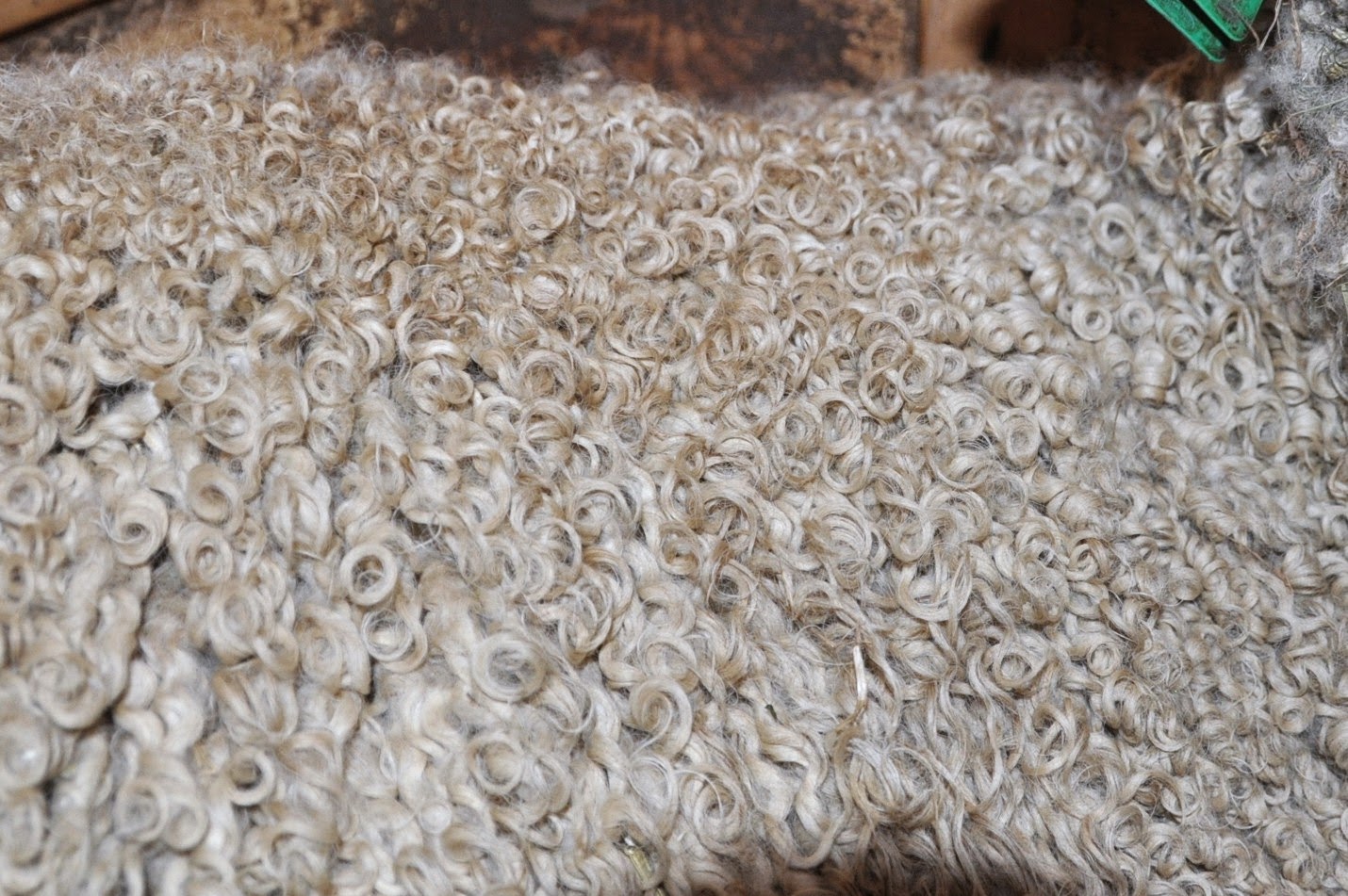 The sun comes in the big door of the ewes' barn for most of the afternoon.  It's a grand place to sit and rest if you're a sheep. 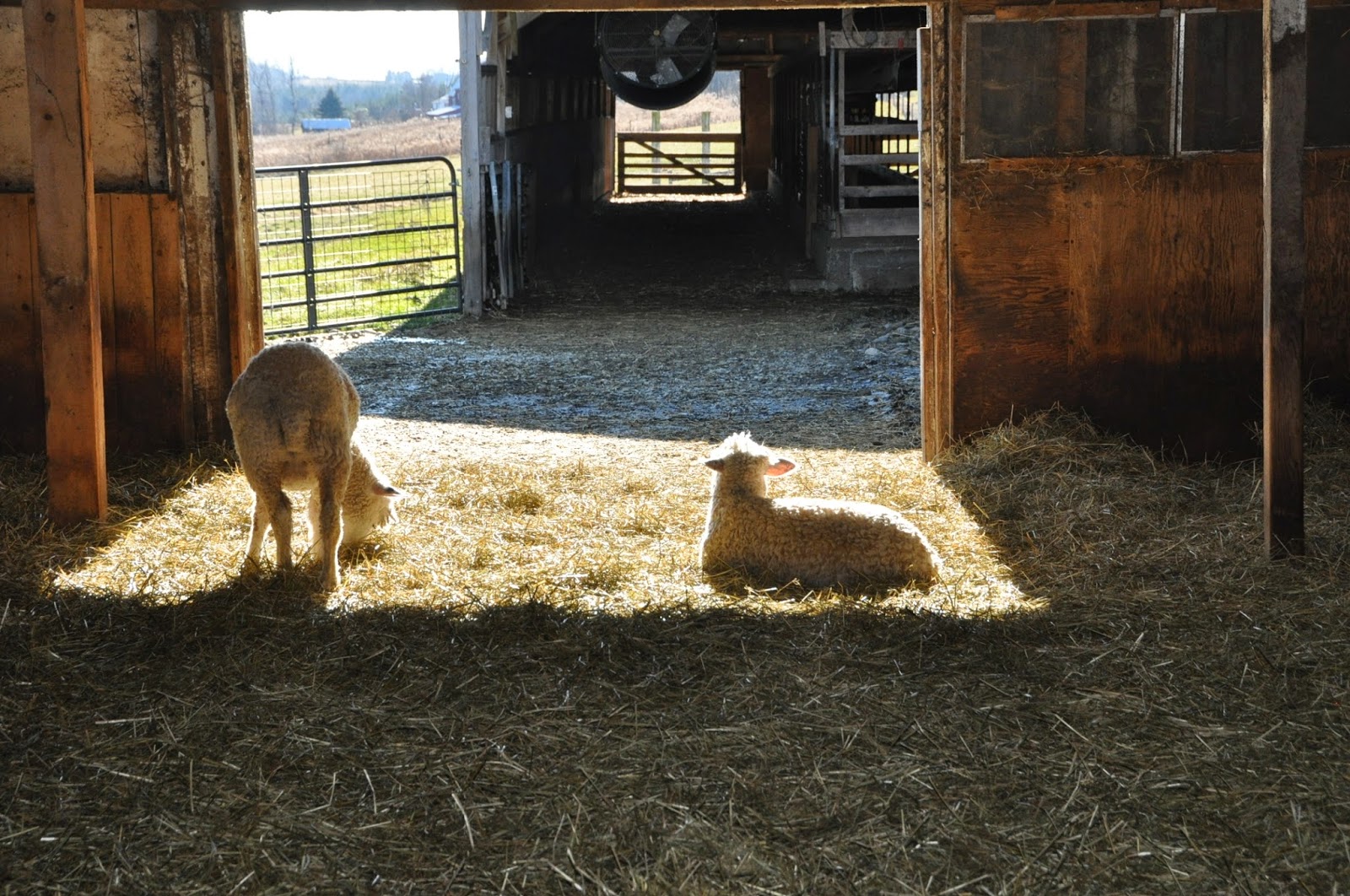 The bred ewes are still in a separate area so they can get a small grain ration and also not have to put up with the frisky unbred animals pushing and shoving at feeding time. 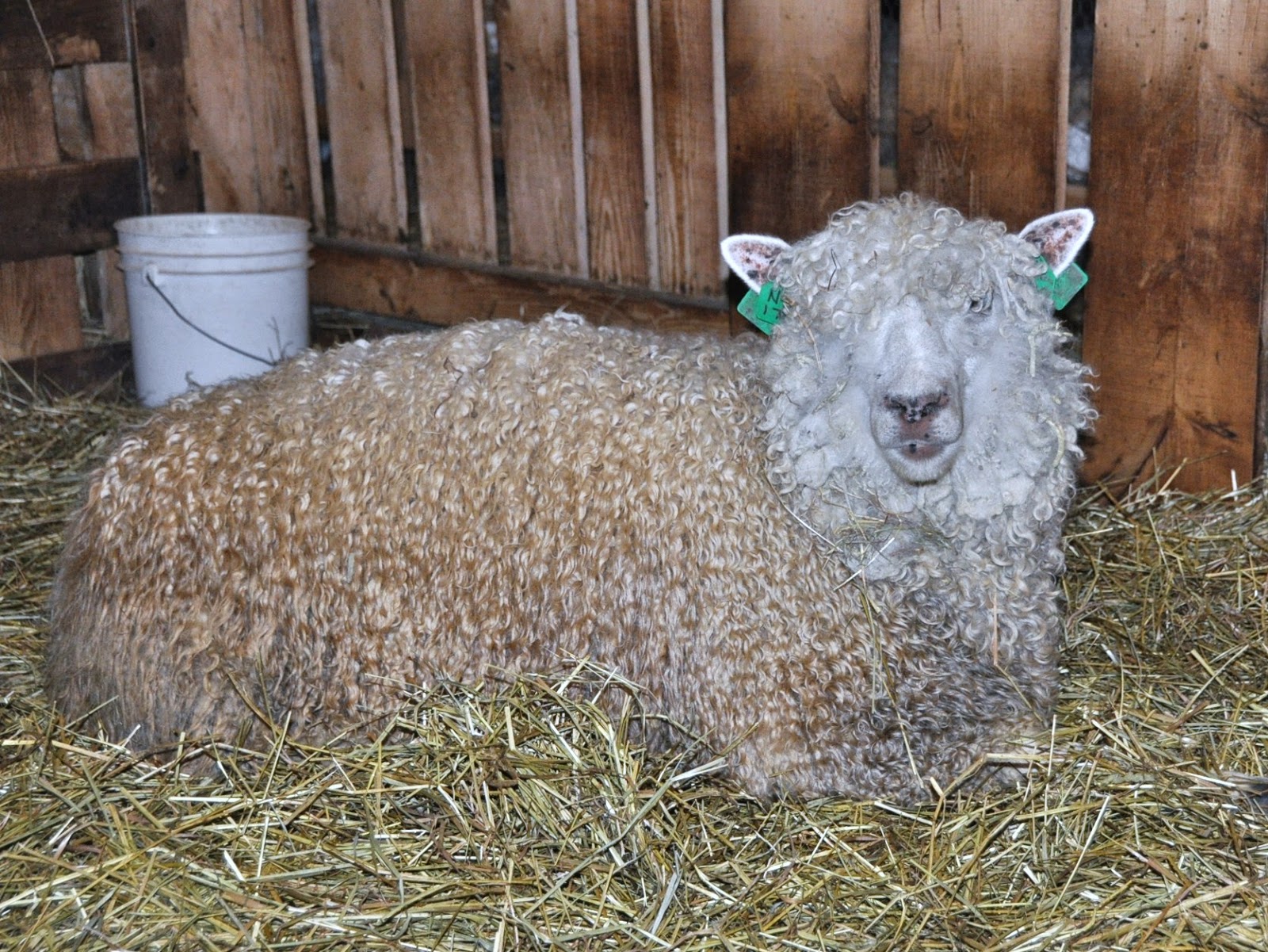 "Why, thank you.  I am far too dignified for such things - unless pushing will get me somewhere." 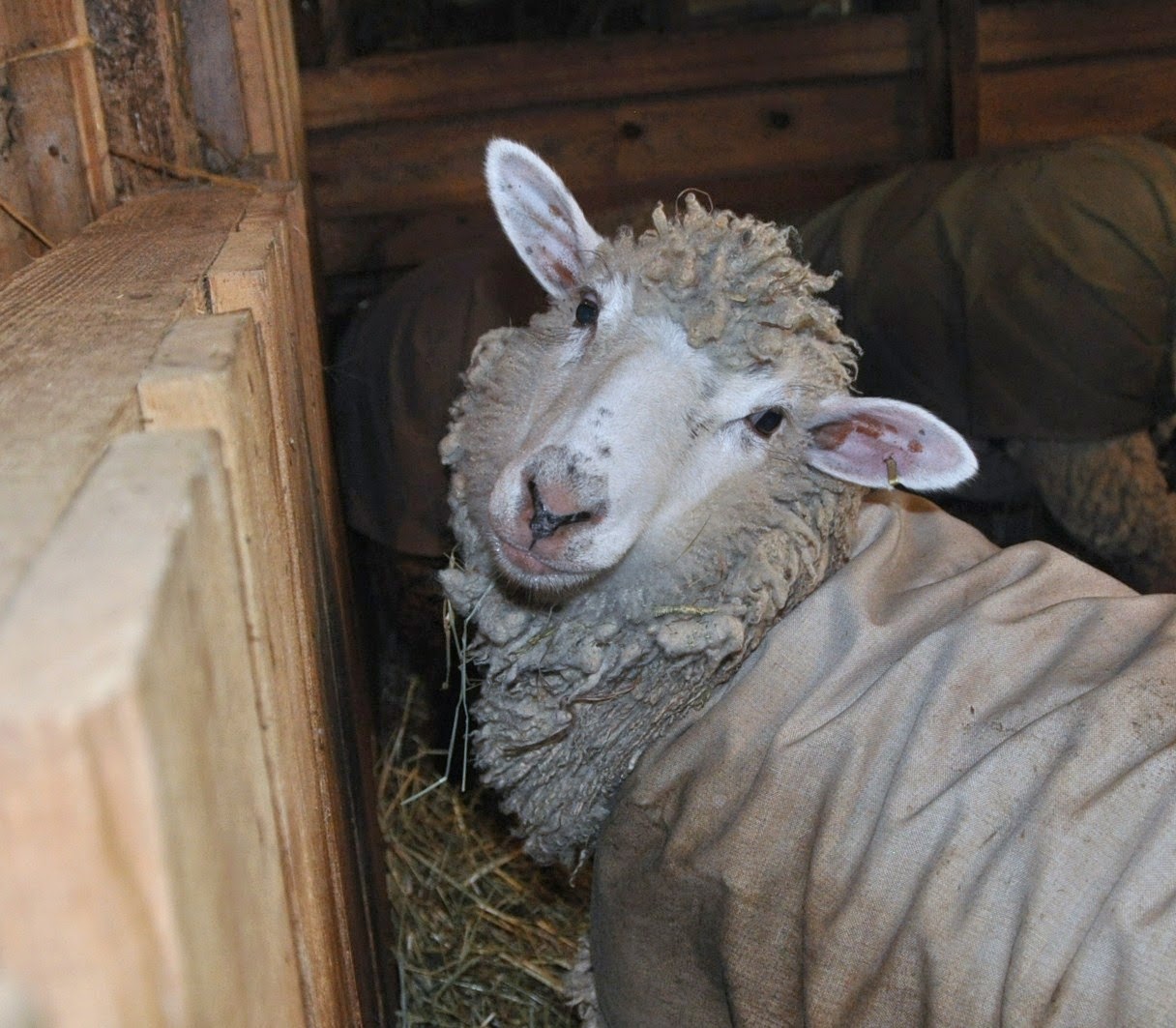 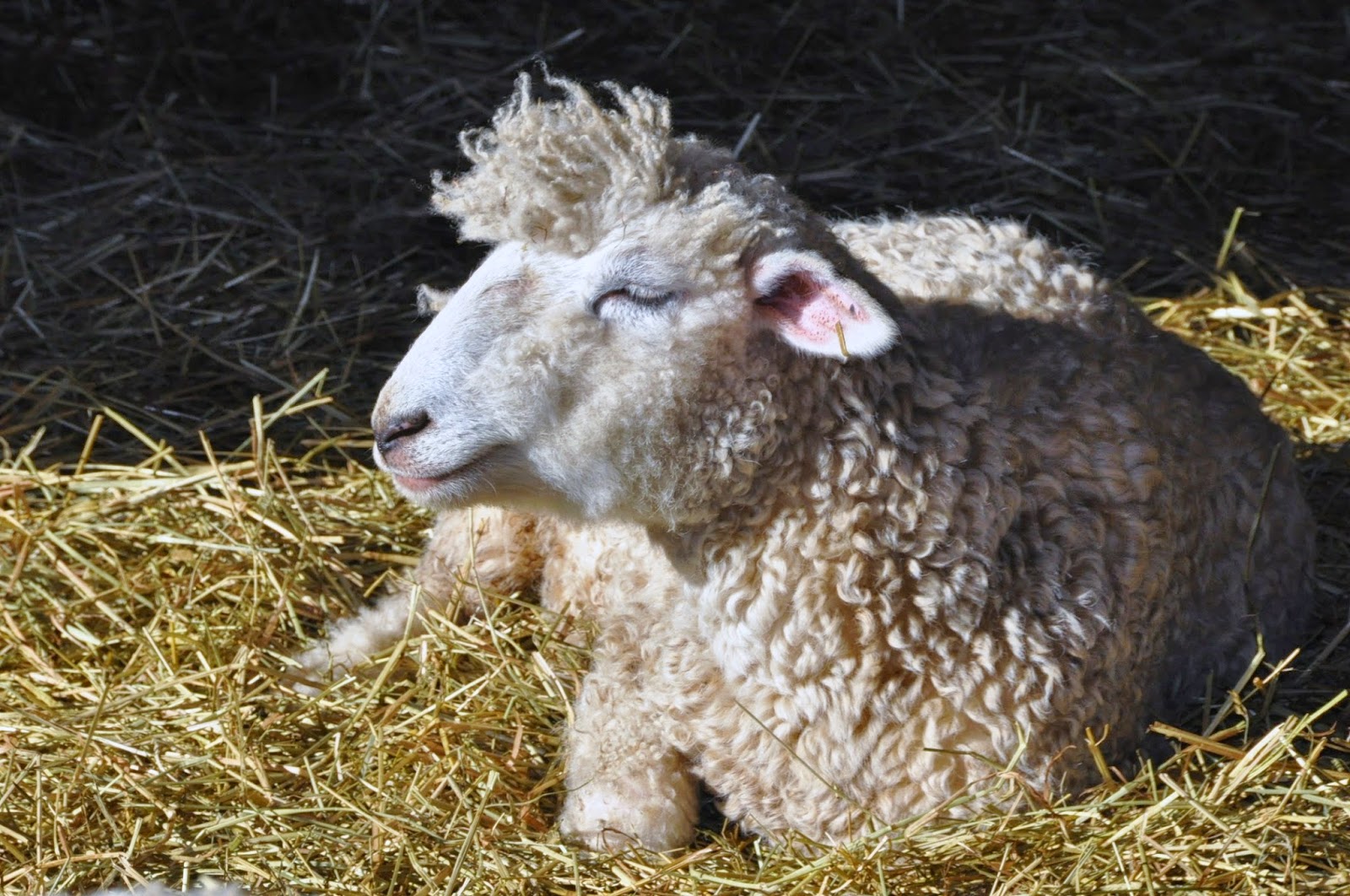 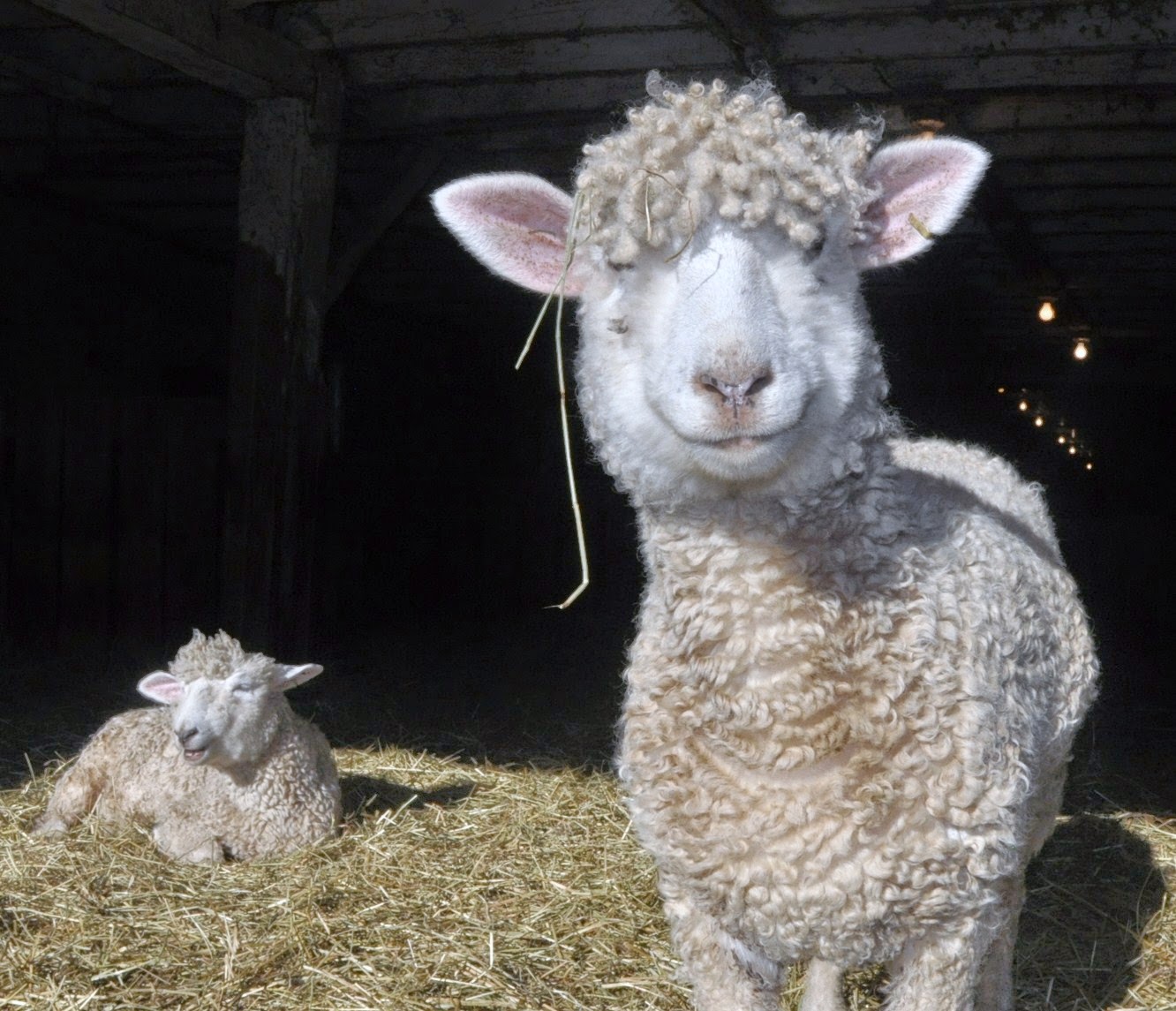 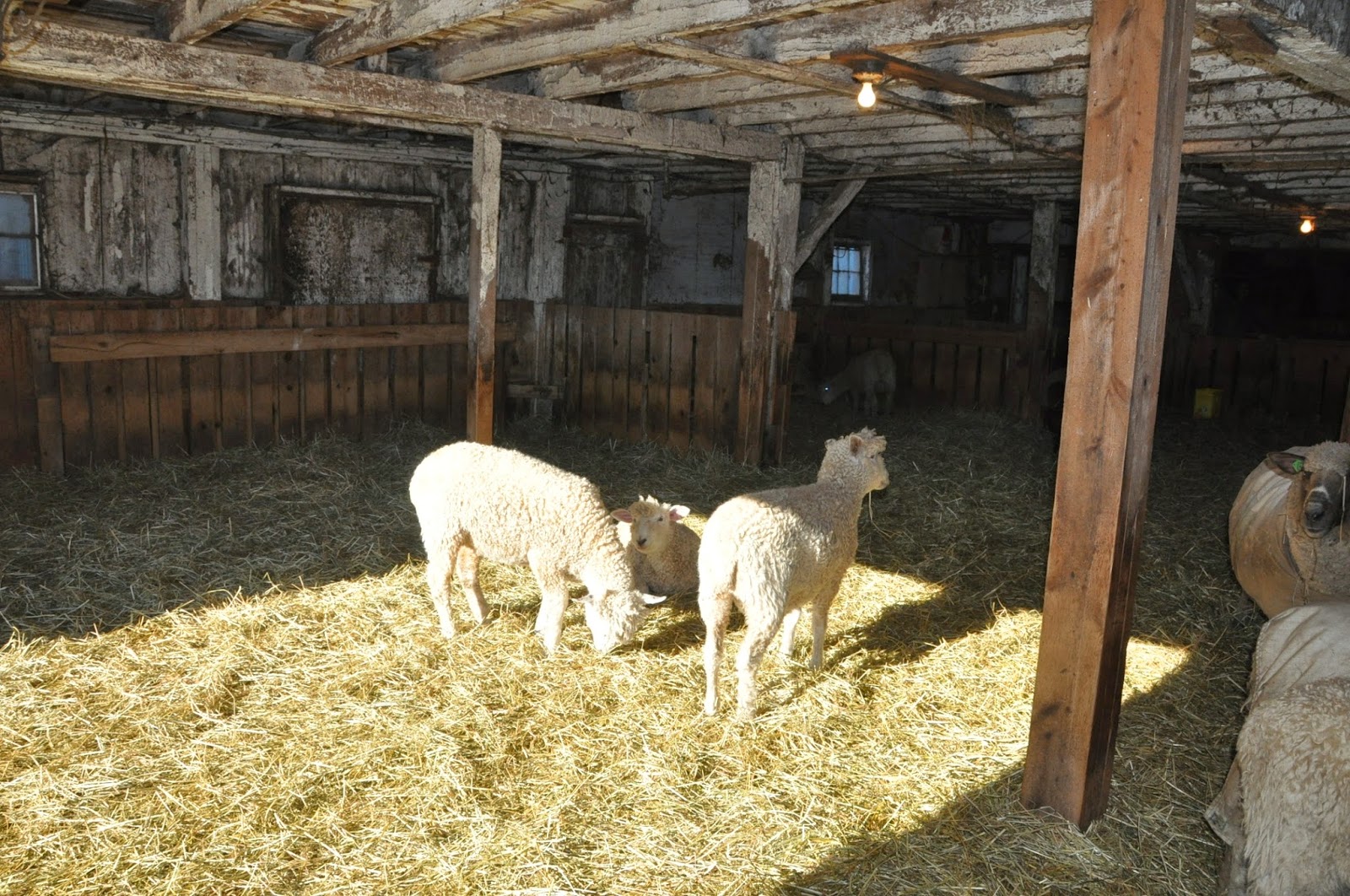 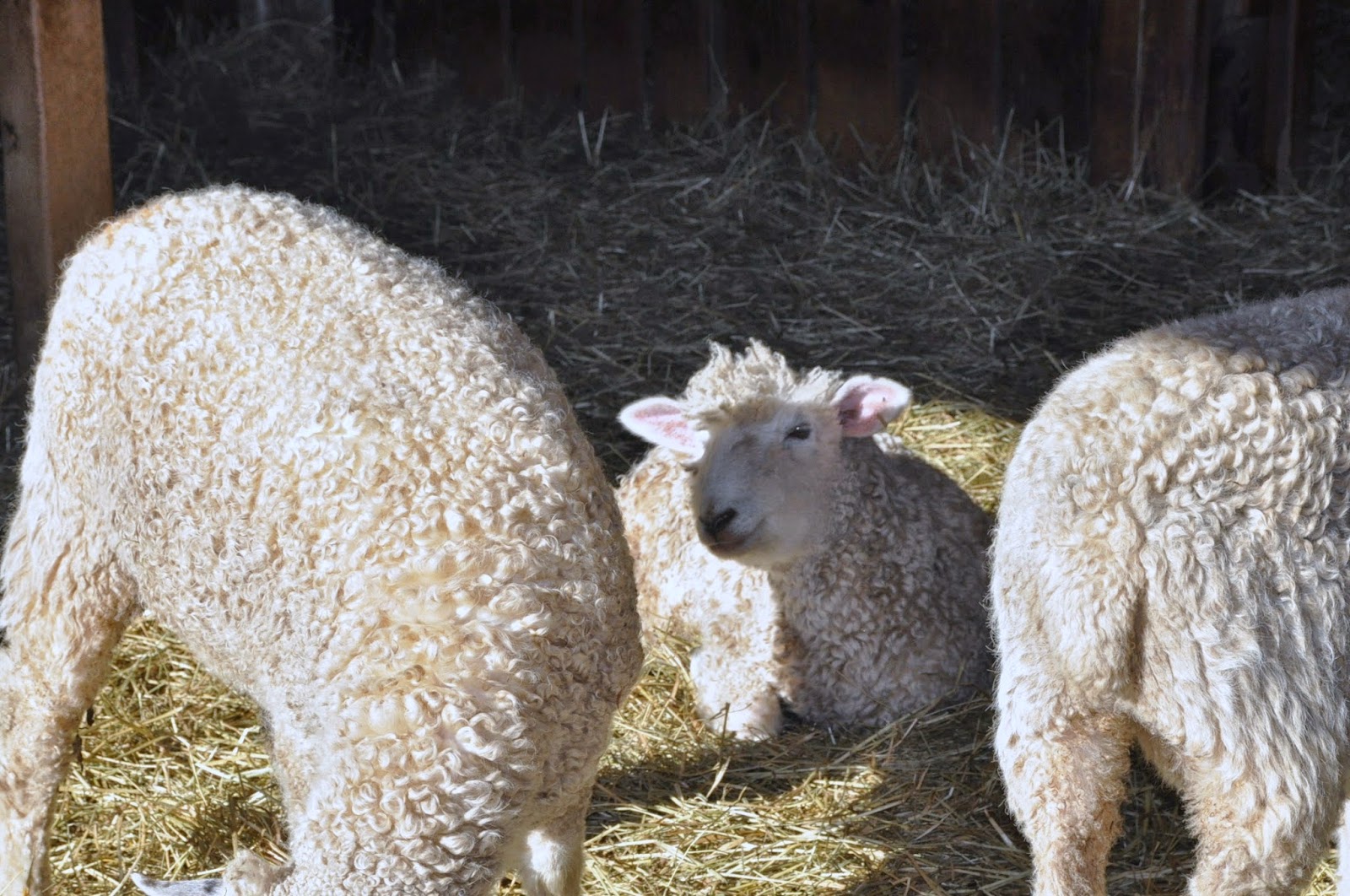 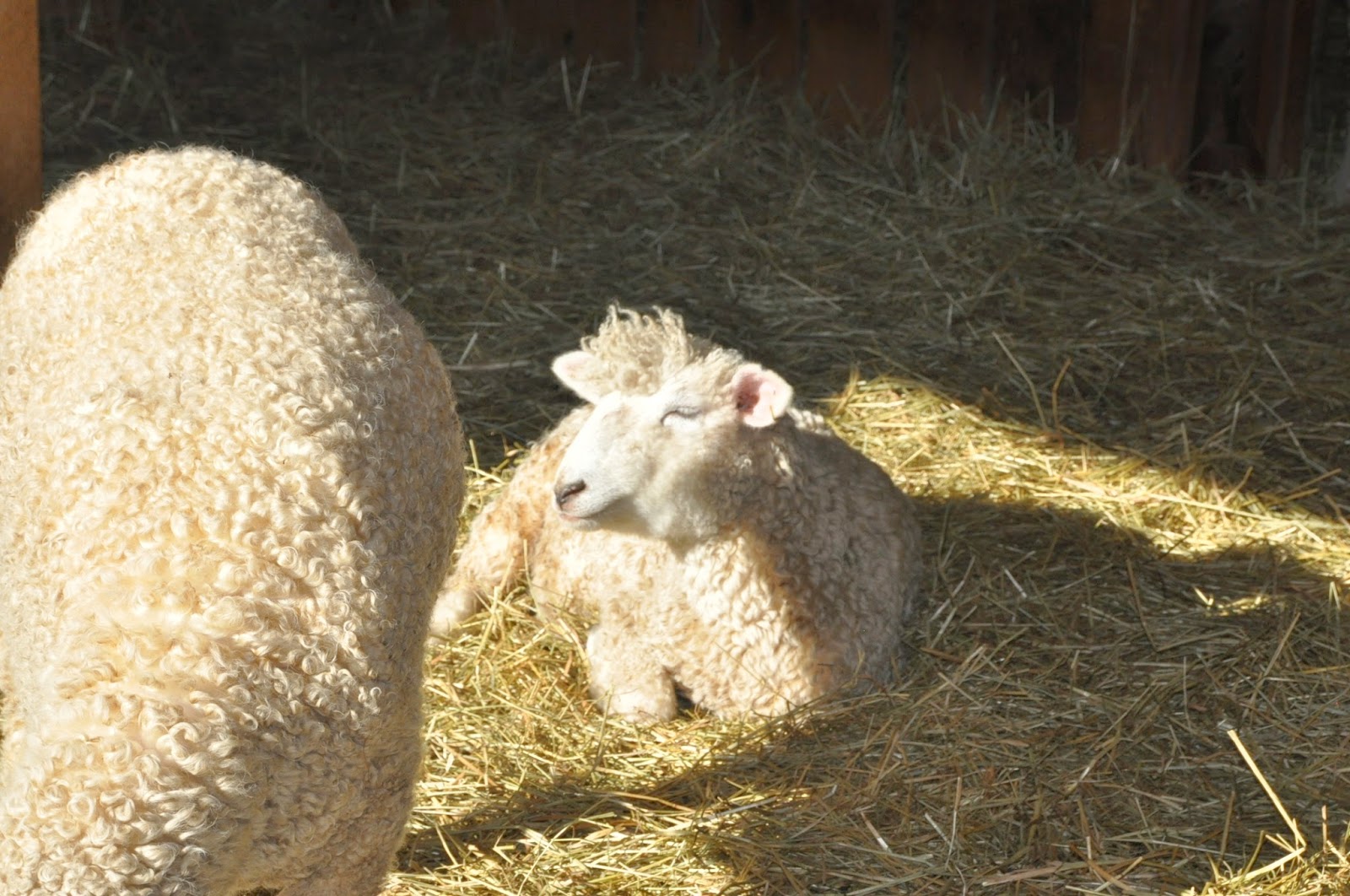 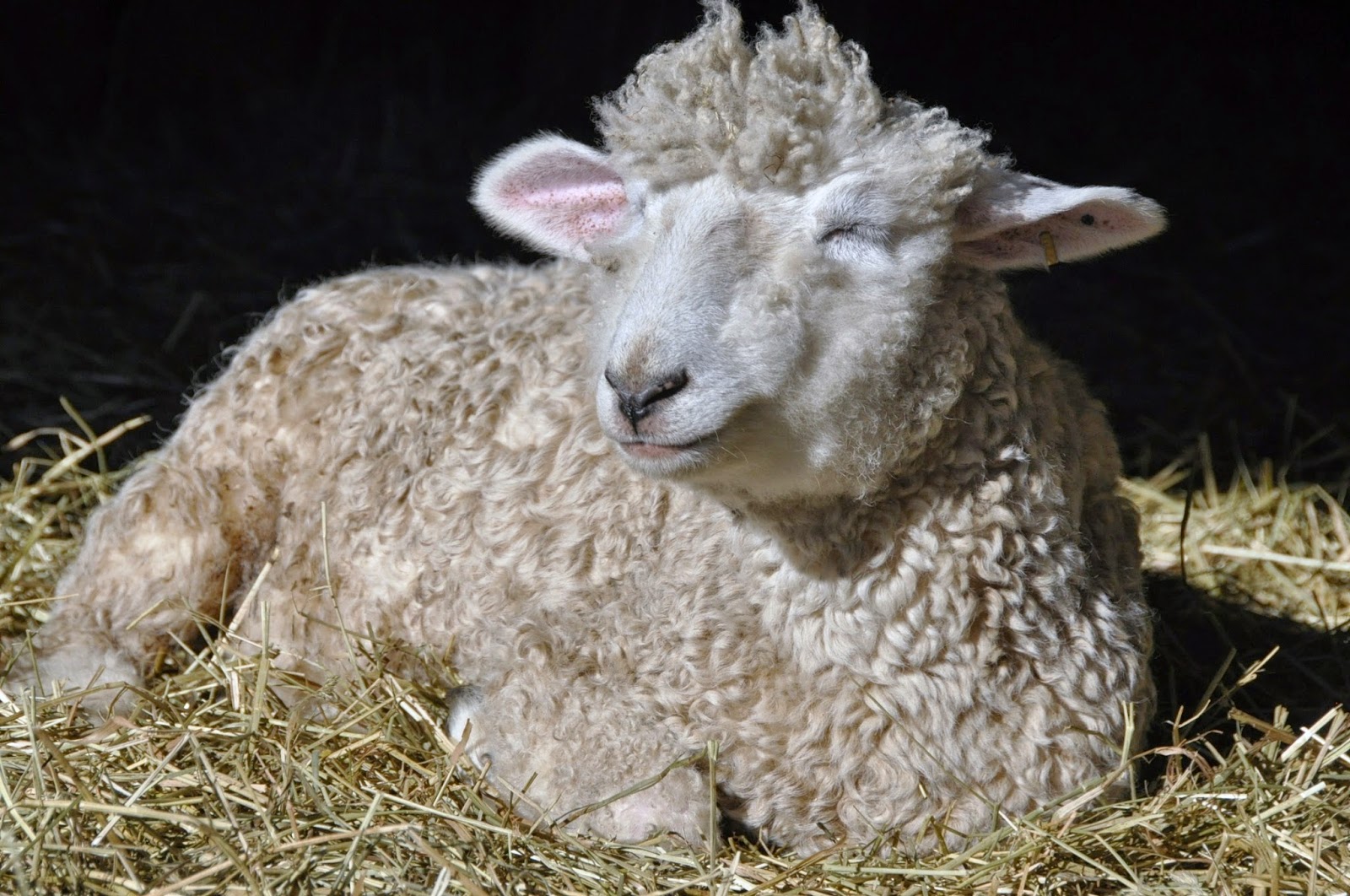