Later rather than sooner, but winter has arrived.

Eighteen degrees with a stiff wind. 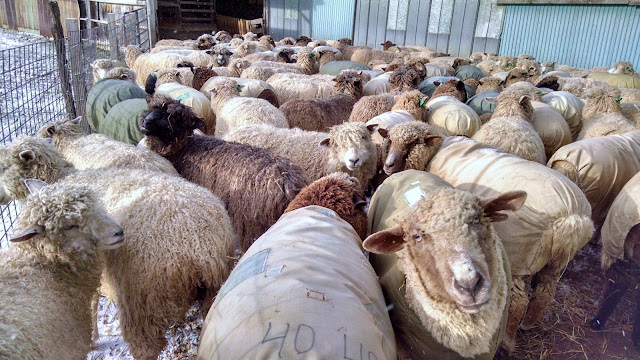 They Can't Take It Back

The current thinking is that we're going to pay later in an ugly way for the unseasonably warm weather this month, but nobody can take back the two months of non-winter that we (at least ME) have been enjoying in this area.  Tough on snow plow businesses and ski resorts but there's no snow or ice underfoot and the water lines in the barn don't freeze and we have the bedroom windows cracked open and coats are pretty much optional during chores so I'm not looking at this gift horse too closely.

Christmas presents have mostly been sent (still working a bit on one) including one Finished Object from the knitting needles:  a scarf of natural colored angora from handspun yarn that was some of my first, so it's been marinating in the stash for literally 20+ years.  It's for my 91 years young godmother and while she hasn't had need of it yet this year I'm sure it will get cold enough to be useful. 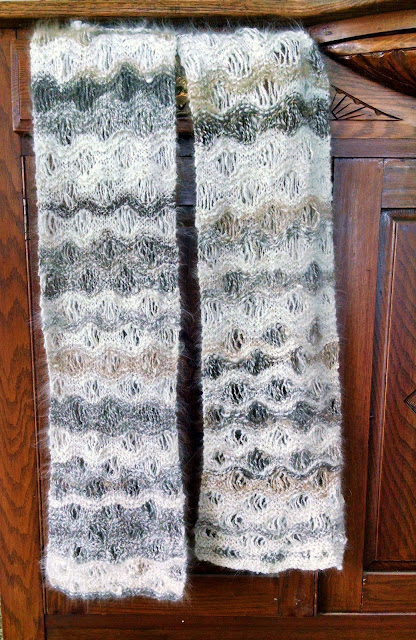 It's based pretty much on the Seafoam Scarf which was the popular knit a couple of years ago.  Typical of me to ride the backside of any knitting trend.  I'm pretty sure I have a thorough knowledge of yarn overs now.   ;-) 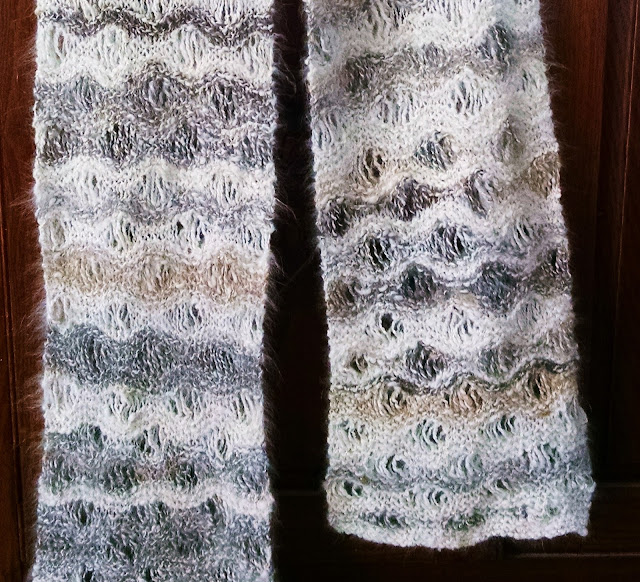 The sheep seem to be enjoying the weather too.  They aren't too warm even in a heavy fleece and standing in the yard while we fill hay feeders inside must be pleasant or they'd migrate into the feed bunk in the shade. 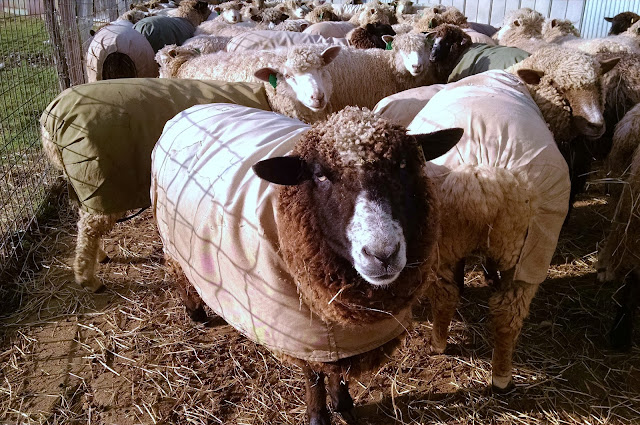 Minnie in front, Macaroon behind and Salsa to the right looking this way. 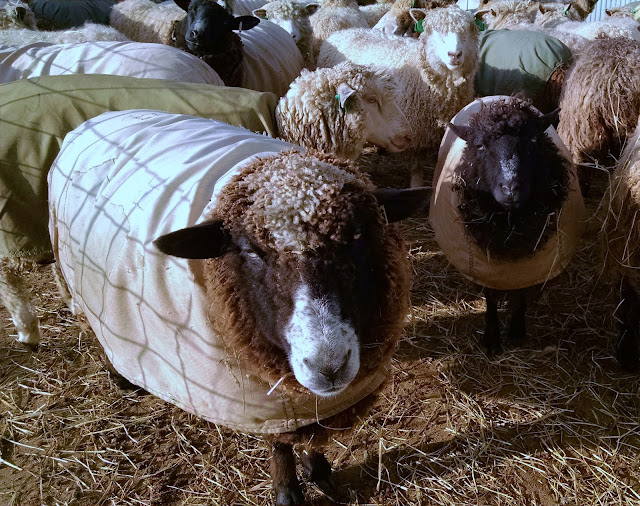 And the nicest Christmas present is Peanut's progress.  We can't say 'Christmas Miracle' because it took a solid six weeks of medical attention and bandages but the deeper wound on her leg has finally closed.  Nice pink skin and no discernible lameness. 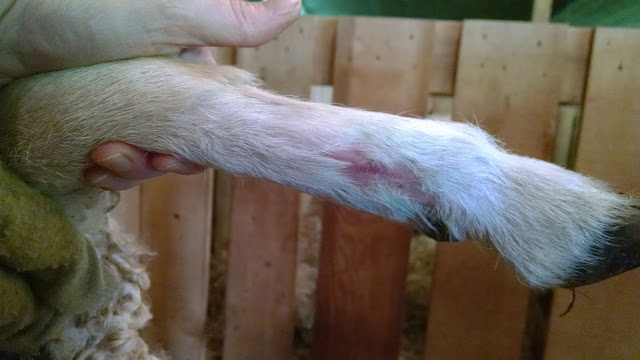 We're leaving the bandage off but will keep her penned for a while yet until the skin toughens up and reaches a sturdy, normal thickness that can withstand the inevitable bumps and scuffs from other sheep at the hay feeders. 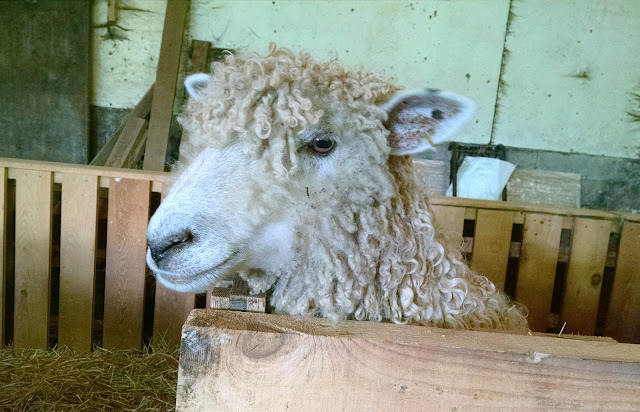 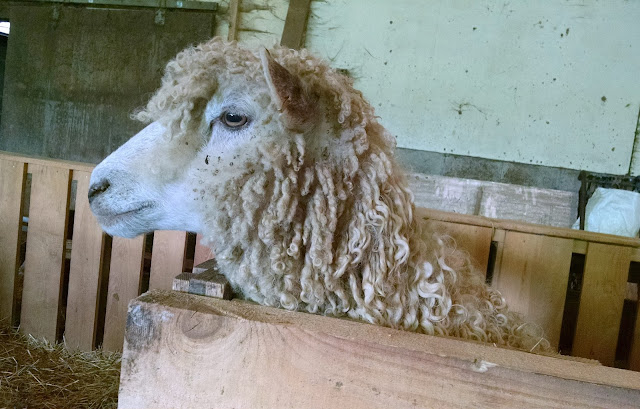 "And I wants to go over THERE!"

Hang on Peanut, the new year is coming and I think your sentence will be up!

Can I Sleep Till the Solstice Passes?

These short days really kick my butt.  All I want to do is eat and sleep.  My energy is at a low ebb just when I need to be doing Christmas things - decorating, cooking, making/buying/sending presents....  normally I'm a night person but as soon as it starts to get dark (that would be freakin' 4:30 in the afternoon) I start hoping it's close enough to bed time to go there.  Uh, no.  I know once the days start getting longer I'll feel more motivated.  So I will blame my recent lack of blog attention on the tilt of the earth and an attitude that makes a sloth look like a Type A personality by comparison.

Even so, we have been doing things, so let's get caught up.

We went to the woods several more times and Andy brought home enough wood to last both boilers through the winter.  He still needs to run the giant pile of pole wood over the buzz saw and the big blocks through the splitter but at least it's all right here handy.  This big ash is in the process of dying but we'll leave it alone because it's got lots of character and because it would be super dangerous to mess with! 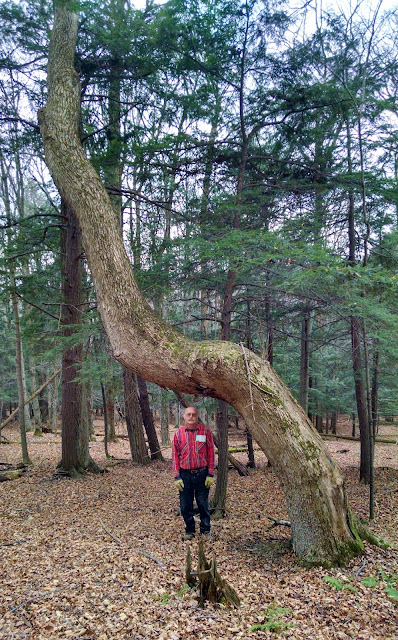 The sheep have had a pleasant time without breeding groups and rams disrupting their routine and surroundings.  Even though we have good, quiet rams the whole flock is generally more restless when they are in the barn.  Just more motion and low-key disruption in the vibes. 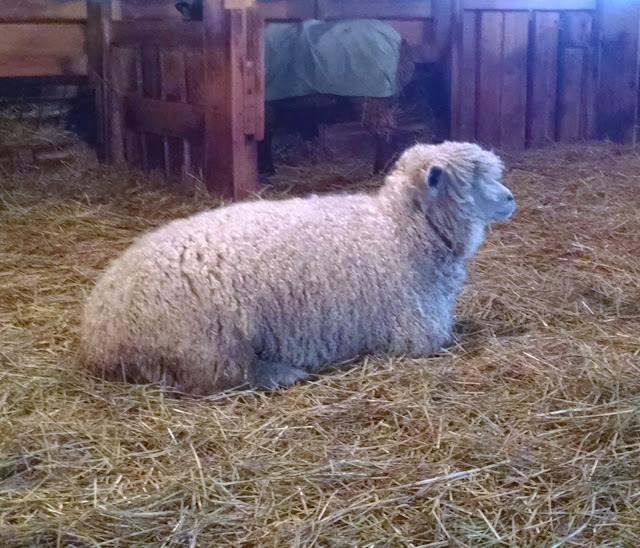 Which gives way to outright sleeping in the middle of the floor. 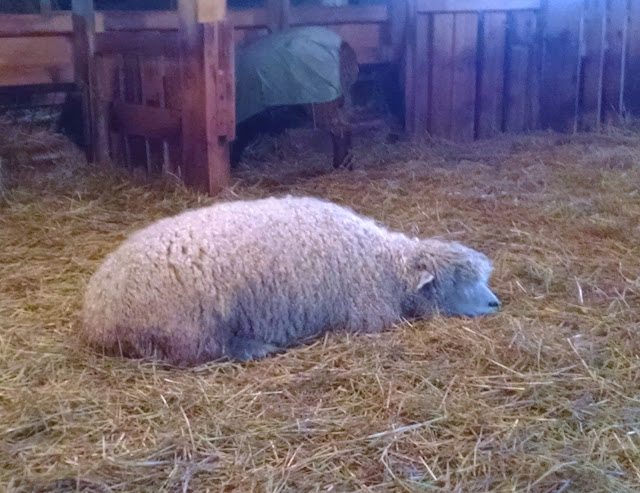 Most of the sheep are wearing coats now since we're feeding all hay.  I intend to try coating some of the Cotswolds this winter.  Their curls are just so pretty and awesome and while our feeders are a very good design they still get a little bit of fine trash down the back.  I'll keep an eagle eye out for any felting under the jackets.  We are utilizing the feeder out in the bunk which was built for a breeding group one year.   It's working very well to alleviate crowding at the indoor feeders.  We're calling it The Picnic Table. 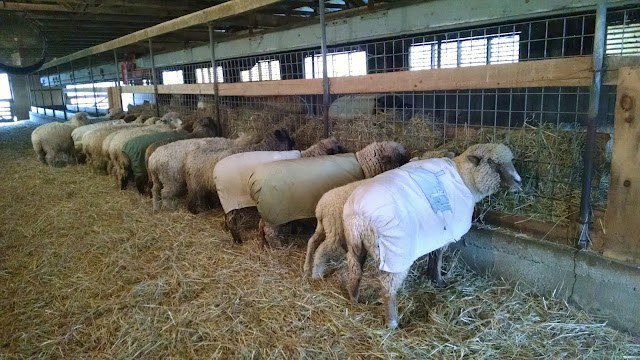 I finally joined the rest of the world and got the farm on Facebook.  Oh. my. gosh.  Sooo many icons, buttons, settings, notifications.....  still fumbling my way around.  I'd love it if you'd Like our page.  I need to get a snappy link to it on the blog sidebar here.... add that to the list.....mumble, mumble.  I do like the immediacy of it and that you can just post a quick little thought or news item.

﻿The Christmas On The Farm craft/fiber show I attend in Phelps in early December was a good day's outing with a nice crowd.  I got a little Christmas shopping done too! 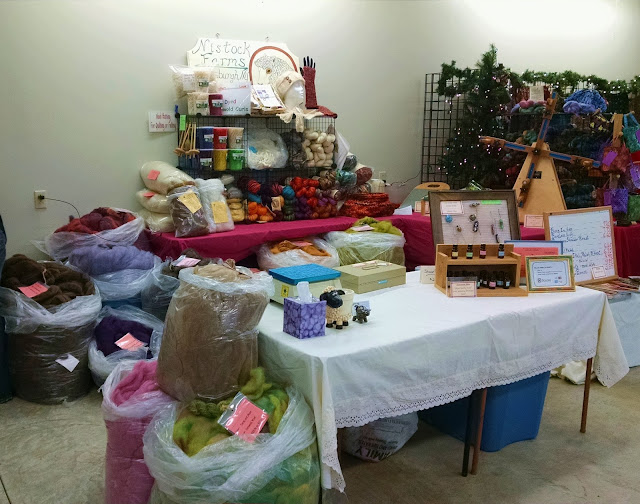 The following weekend was our spinning guild's December meeting in which we do an anonymous gift exchange (if you want to - it's not mandatory) of nice, ready-to-spin fiber.  One selects a gift from the pile based on which wrapping appeals to you.  Wouldn't you know, I was the first name picked!  And pulled this from the pile. 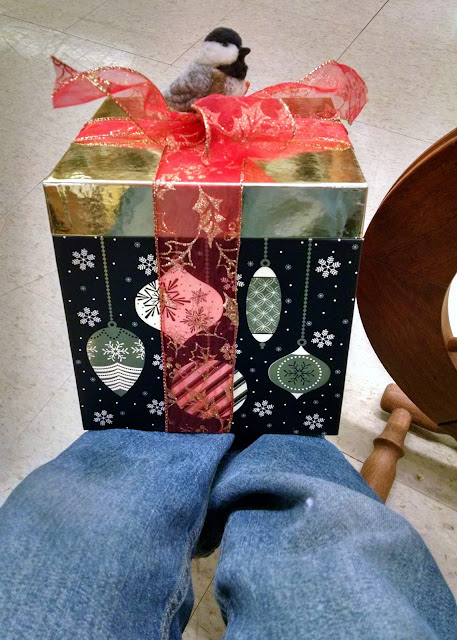 I was loving that needle felted chickadee on top but alas I didn't get to keep it.  'Stealing' is an option instead of picking from the pile on the table and this box had about 10 owners before we were done.  It was all good though - this pretty package came home with me and...... 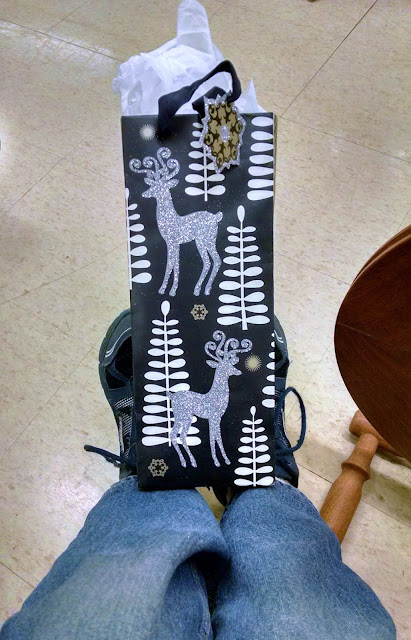 .....held this:  Into The Whirled blueface leicester roving in a colorway called Vegetable Medley.  Can't wait to spin it!  I already have someone's Christmas gift for next year in my mind. 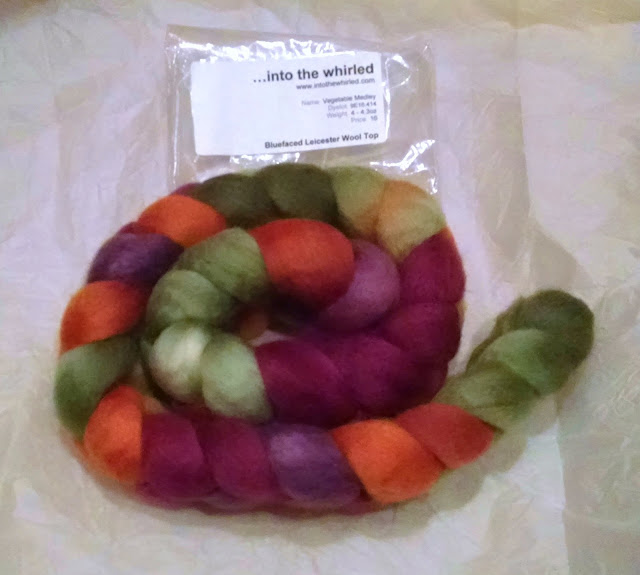 Also at guild I showed off Andy's newest product - blending boards.  Here's a good video on how to use them.  These are fiber processing tools intermediate in size and capacity between hand cards and drum carders.  They are great for combining smallish lots of fiber which you can then spin or felt and are particularly useful for seeing how different fibers or colors will work together. 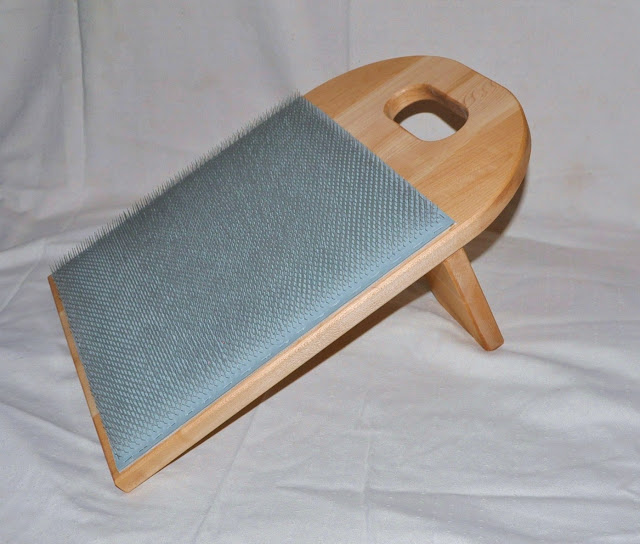 Here's a sample I did in a few minutes using two different colors of Cotswold wool, some dyed silk and a little firestar fiber for extra shine. 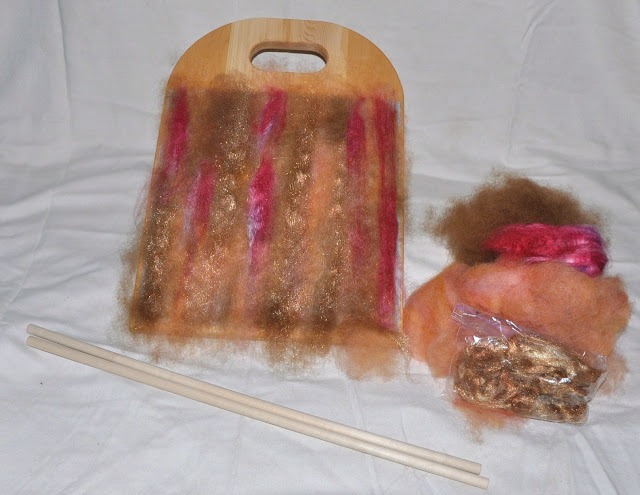 When done, I pulled the fiber into thin roving and chained it lightly so it would hold its shape until I could spin it.  Soon as I get a couple of minutes..... 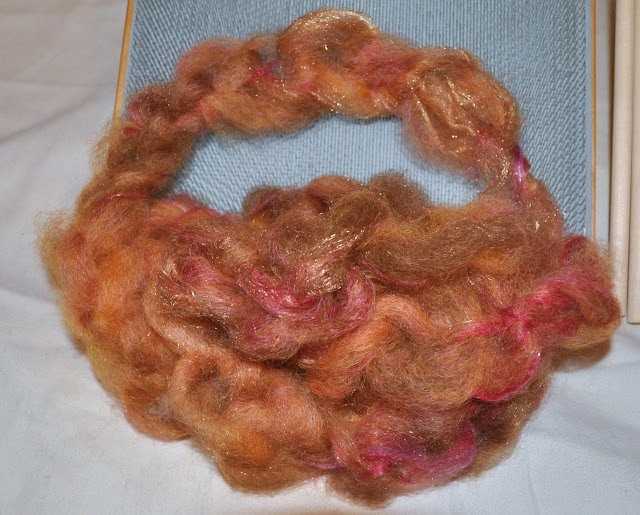 The boards were well received and both sold there that day.  He's ordered more of the blending cloth and will be making more in time for Roc Day in Ithaca on January 9 where I'll have a booth.  Once he's made more I'll take 'real' pictures and get them listed on the website.

We've started the 'big barn clean out' in the lower barn.  Andy got the east side done in a (long) day.  The sheep were a little crowded being all in the west side but it was only for a day. 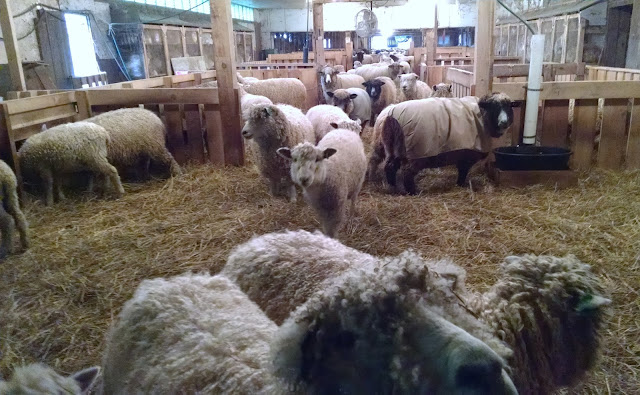 I'm sorry to note that we lost Lucky last week.  He had been losing weight for some time despite all the extra measures one does for an older animal and we couldn't find a reason.  We knew we'd probably have to have him put down "at some point" before we got into deep cold winter but he sustained an injury that was going to be too hard to overcome so we had the vet out and he went gently from this world.  He was a well-behaved boy who came when called and we miss him.

In better news, Peanut continues to improve!  I finally dare speak positively about progress.  She's still penned and wears a light bandage but the wound on the outer surface of her leg has healed over and the bigger, deeper one on the inner surface is coming along very well.  There's still a raw wound but it's closing at a good pace and she has no lameness at all.  Whew! 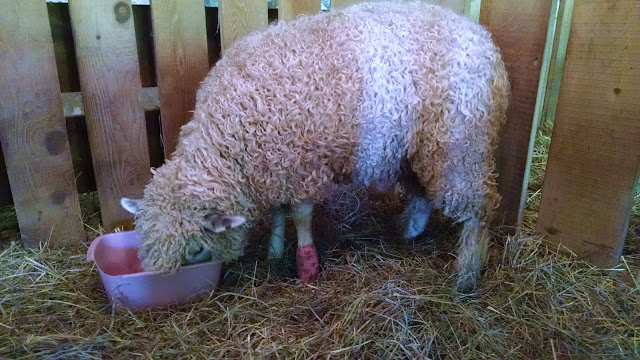 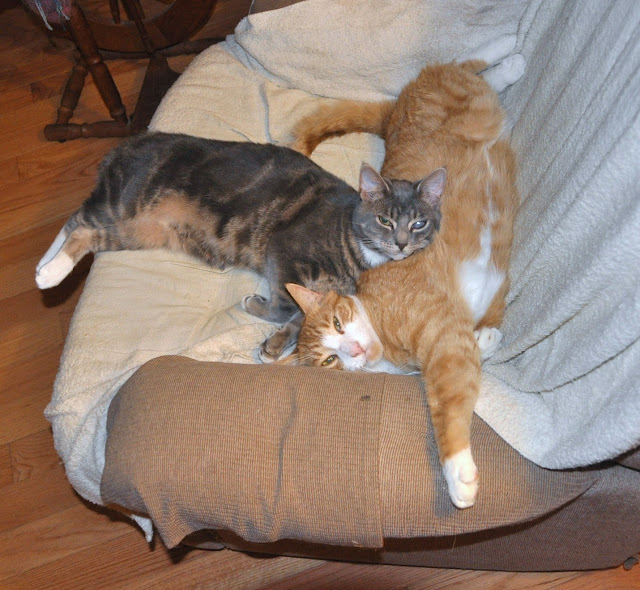 "You humans work too hard.  You should learn the value of a properly performed nap."

The two weeks are over and Peanut is out of her splint. 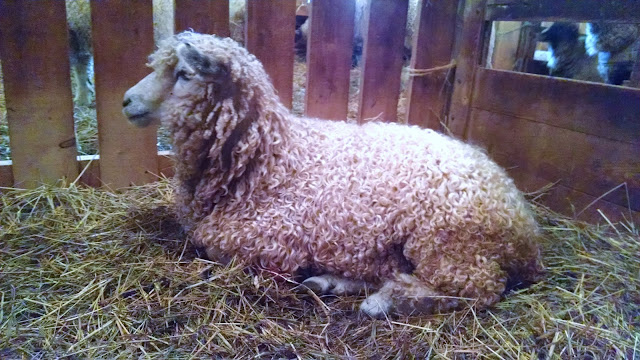 She's so happy to be able to lay down by herself.  It was a rather miserable time for her in that contrary to popular opinion she did NOT learn how to lay down with the splint on.  Long story short, every night at bedcheck Andy would pick her up and we'd settle her down with three legs folded normally and the splinted leg straight out forward.  By the end of the two weeks she was getting pretty footsore from standing so much.  Some mornings she was up on her feet, most mornings Andy helped her stand.

The injury seems to be behaving itself.  The bare skin is dry and leathery (dead on top) but nothing beneath it is showing any sign of infection.  There is some swelling in the joint, which is stiff but at least in the right position for walking, and I have a light bandage on it to keep it clean and give a little support.  Seeing some swelling and heat there isn't too surprising since I expect the tissues underneath are trying to come to terms with how to make repairs and reroute circulation.  The hoof does not feel excessively hot and she can flex her toes and bear weight pretty well on it after she's been up and moving around for a few minutes.

We are far from out of the woods on this but so far it does not seem to be deteriorating.  That's as optimistic as I'm going to be out loud. 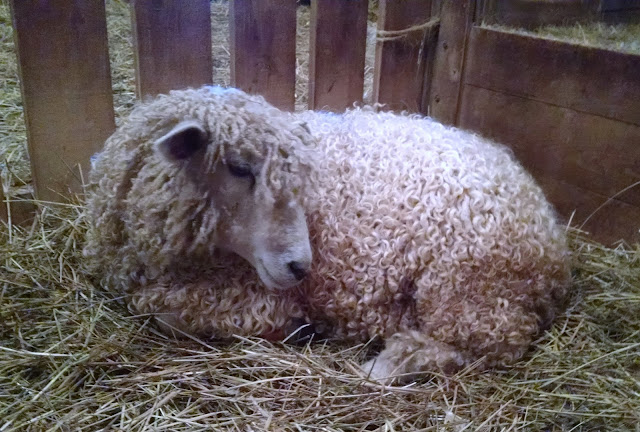 Everything looks better when you can at least sit down and take a load off.
Posted by Sheepmom at 6:25 PM 8 comments: