Tuesday gave us two inches of rain.  Thankfully, it was a warm rain that came and went throughout the day with no dramatic wind, hail or lightning.  Andy has been on a barn cleaning marathon and with the weird cool spring we've had, the flock can be locked out all day and not need to come in for shade.   Keeping the barn well bedded doesn't stop wool from getting dusty and grimy so I love having the sheep cleaned off by the rain.

And of course, especially with the Cotswolds, if you are standing on food you might as well keep eating it.  Being "hungry" doesn't really enter into the equation which is why we slowly acclimate the flock after a winter of dry hay.

Peanut, standing with her feet up on the curb of the feeder in the bunk which exaggerates her full gut, but still.....  Geez, Peanut. 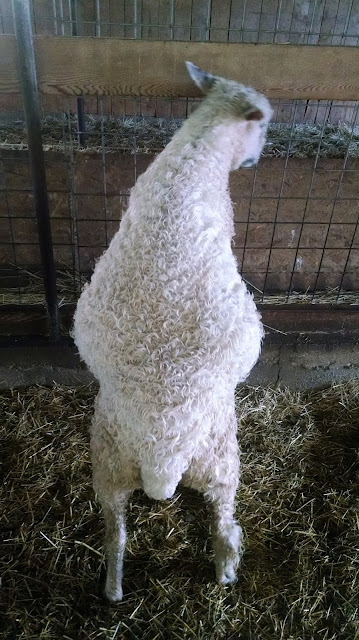 Stewart and Luellen came to say hi..... and beg for beet pulp pellets even though they are clearly stuffed. 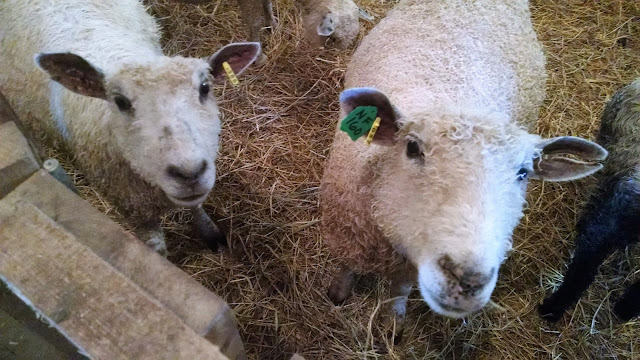 Ophelia's dark spot shows right up when the rest of her is clean and white. 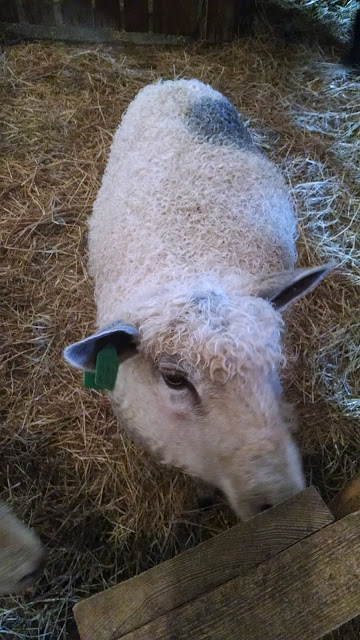 And everybody has to poke around in the fresh bedding to see if there's anything good to eat even though they have just been eating. all. day. 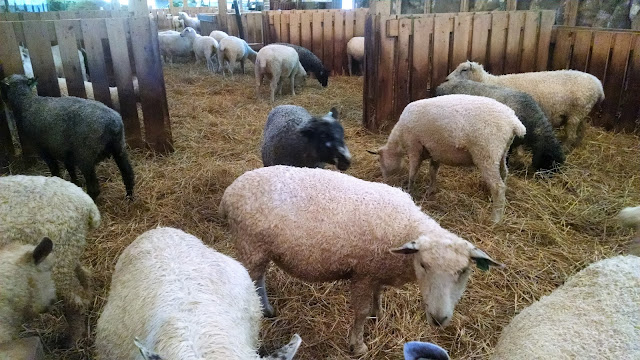 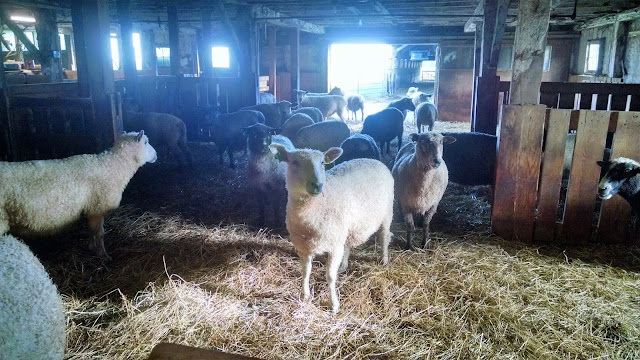 The boys also were shut out all day and came in sparkling clean and rolling with fat good health.  In order of appearance they are Brick, Neville, Castillo, Nigel, B.B., Titan, Wee Little and old Isador who has to grab one more mouthful coming through the gate.


Neville must be carrying a bushel basket of grass in that rumen.  It's called having a lot of capacity and it's a good thing - a body built to carry a lot of feed or a lot of lamb is a plus if you're a sheep. 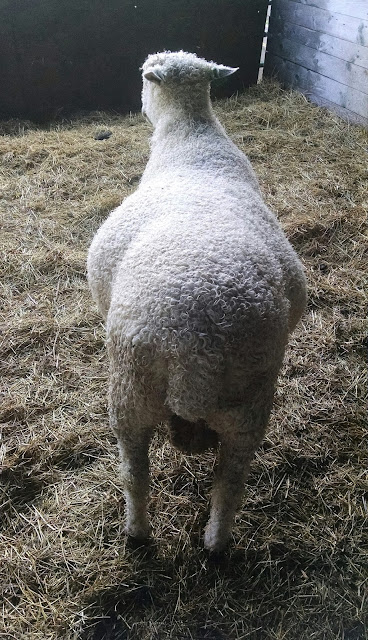 Both Neville and Nigel are Cotswolds and their curls are starting to show up already. 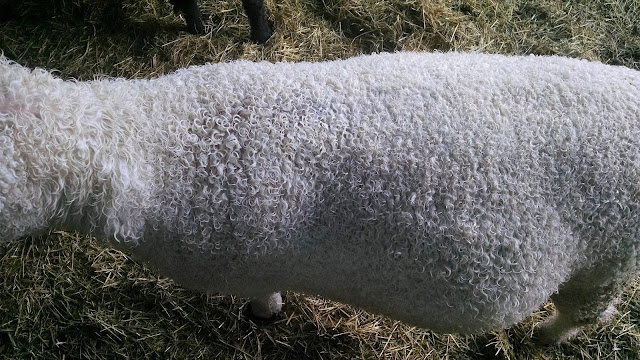 Nigel has coarser curls but they carry well down into his lower hind leg which is a hard place to get nice wool to grow. 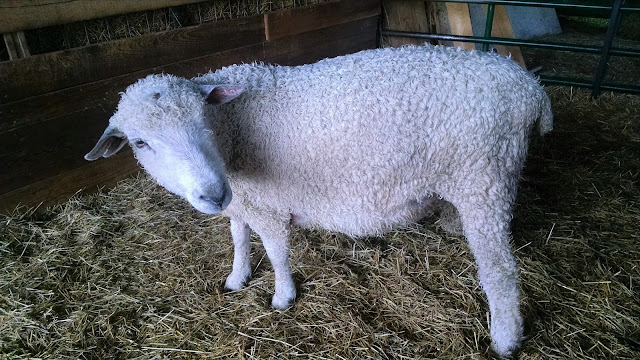 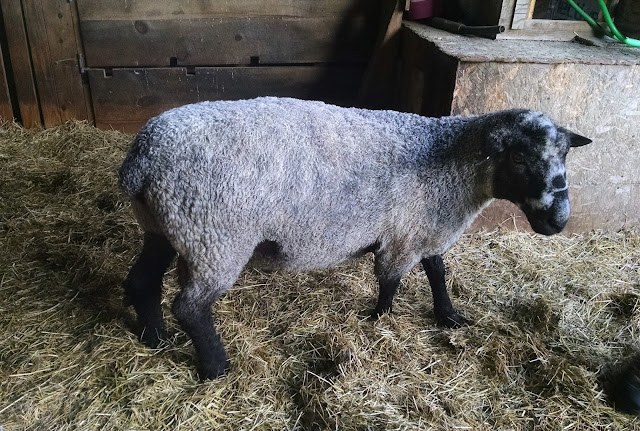 "I'm not curly but I'm so clean I squeak.  I think some of my gray washed off!"

After the day's heavy rain I took Holly for a late walk and enjoyed some dramatic skies. 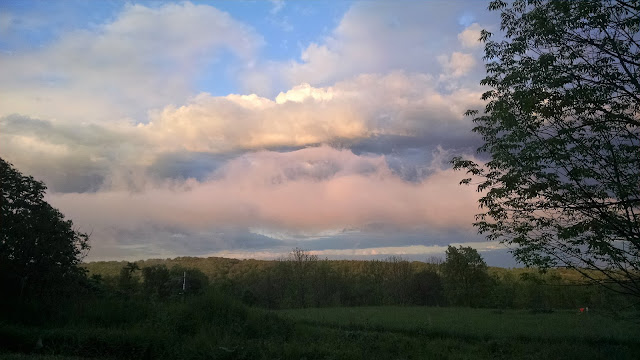 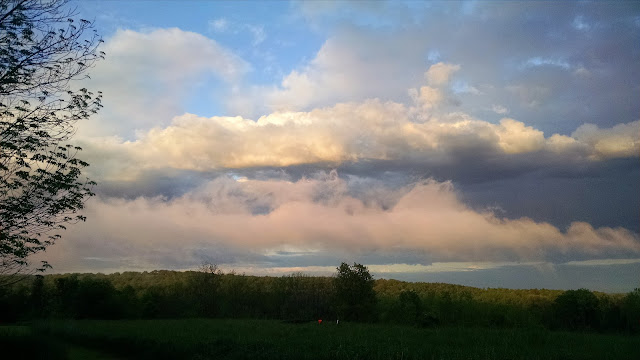 And the frogs in the wet spot in the lower field (which we not-so-cheerfully refer to as 'Lake Wheeler') were really happy.  It's loud but peaceful at the same time.

All in all, everybody had a good day.
Posted by Sheepmom at 6:21 PM 9 comments: