Yesterday's eclipse was interesting and fun to look at (through a welder's helmet) even though we didn't achieve more than about 70% coverage here. The light was odd at the darkest point - the sky was clear and you knew the sun was shining brightly but your brain knew it wasn't the normal amount of light.  We had gone to the woods to drop a few ash trees for some grade stake material and everything just looked 'off'. 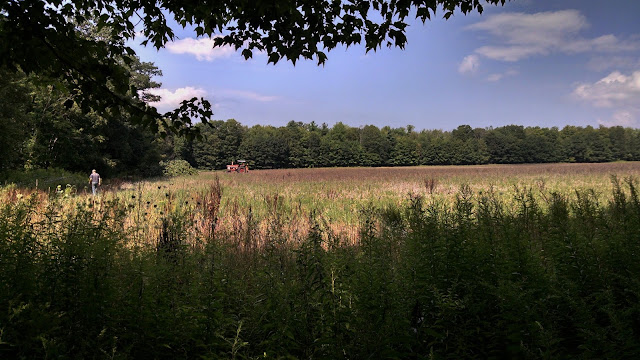 Andy only needed a few trees but wouldn't you know - one of them just caught the wrong side of the crown of a little tree and it guided the ash right into the bole of a cherry and it scraped the bark off on the way down.  Dang!  Turned out that the cherry had a seam where it had been struck by lightning and it wasn't ever going to develop into a great specimen so he ended up cutting it also.  Andy can always use more cherry lumber for the fiber tools he creates.  Although not the same species as the trees that bear cherries that we eat, the scent from the raw bark was amazing - the most pungent and tangy cherry smell you can imagine.  Just like sniffing a bottle of cherry extract flavoring. 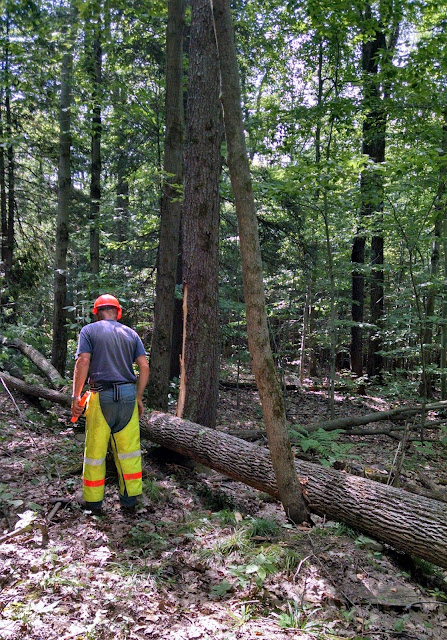 And here's a very curious thing.  Before we left for the woods - about 20 minutes shy of reaching the darkest point in our eclipse - I heard really loud buzzing.........  our tree bees were swarming.


They went up into the higher branches of the locust tree and formed a mass that was quite a bit bigger than a basket ball.  A big swarm! 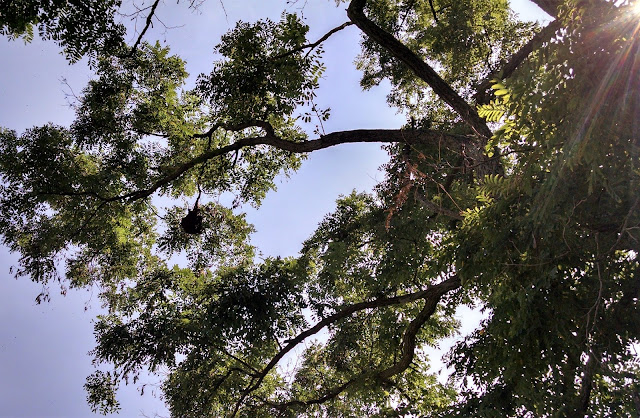 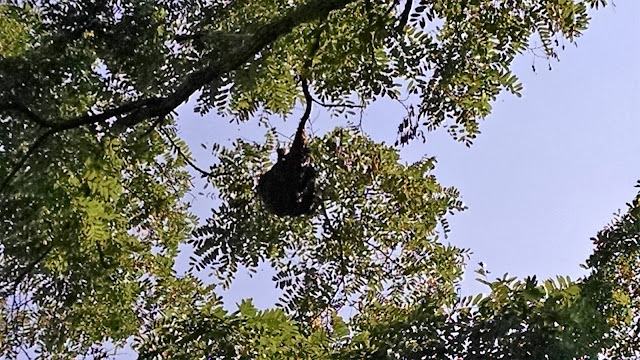 They hung there for a couple of hours.  It was too high up to think of trying to capture them but I kept an ear and eye on them.  I wanted to see what direction they went off in.  Later in the afternoon I heard that distinctive buzzing again and knew they were on the move.  But.... about half the mass of bees had fallen out of the tree and lay in a puddle on the ground. 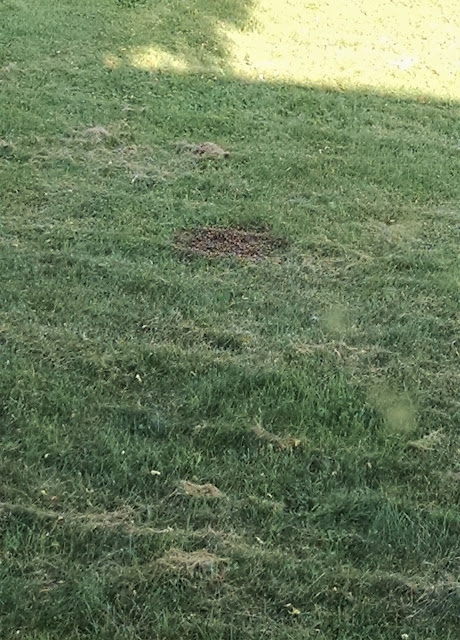 The air was thick with bees again and I thought they were going to regroup around a queen and head off but instead I saw they were going back into the tree.  The puddle of bees continued to evaporate and after half an hour there was just a slow, small cluster in the grass.  I've heard they can do that - change their minds because the queen goes back to the hive - but it's certainly not usual. 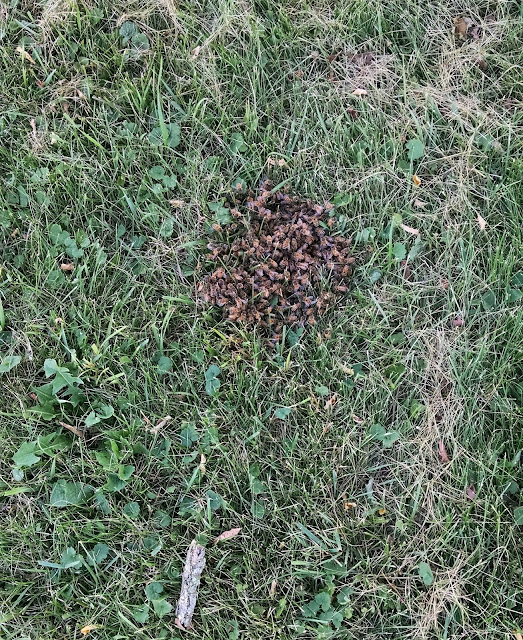 By dark there was just a handful of bees still on the ground. I felt sorry for them since they seemed confused but it was just Nature at work - nobody did anything bad to them or interfered with their plan.

So here's a question:  Did any beekeepers out there observe their bees doing weird things during the eclipse?  Of course it could be a double coincidence - swarming at nearly the exact moment of peak eclipse and then going back into the tree later - but bees are sensitive so maybe they felt an odd gravitational shift or something.

Young Norris is doing just fine!  He's been here a bit over a month now and seems very happy with his lot in life. 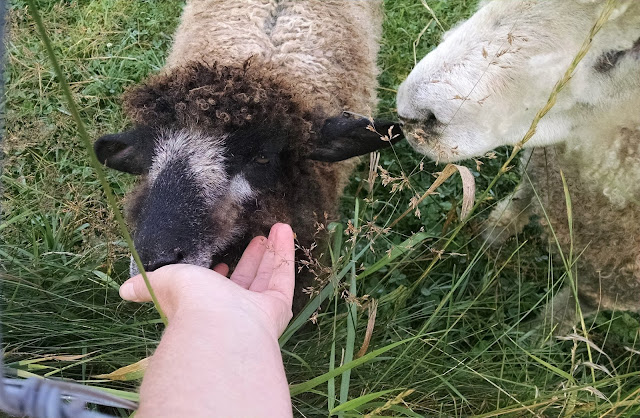 He's gained 20 lbs and it shows in both width and height. 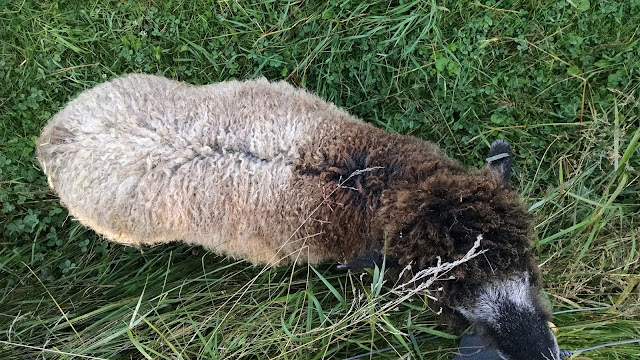 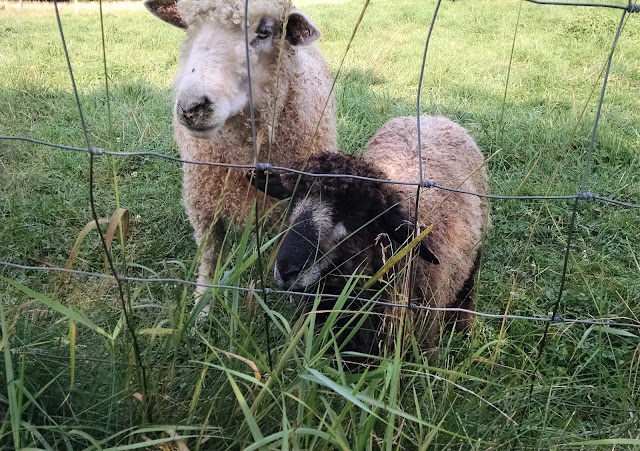 He has the sweetest temper and loves to be petted. 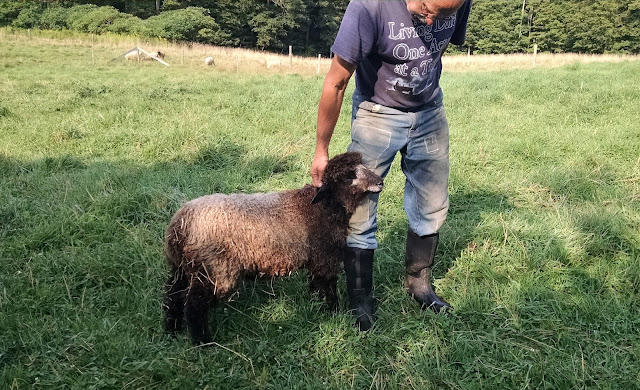 Andy was even helping him channel his inner Cheviot today.  Not!  He's the opposite of a Cheviot's temperament and took the ear lift with good graces. 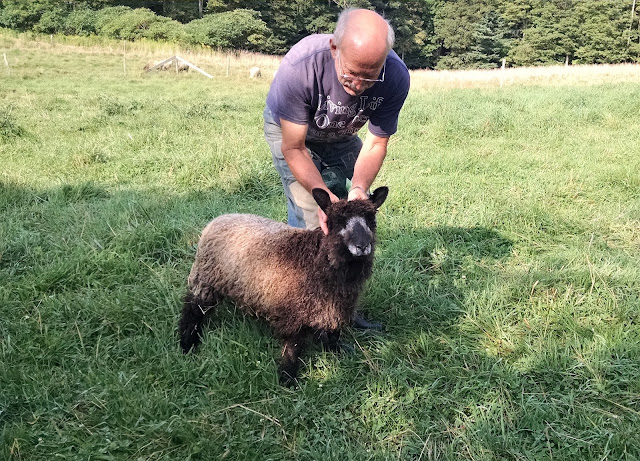 My friend Sue and I were both 'horsey girls' long before we met in college.  In fact, we went to different colleges originally and must have ridden against each other as we were each on our school's respective riding teams.  Then we met at SUNY Delhi and have been boon companions alllll these years since.

"Hey, Robin, want to go to Walnut Hill for the day to watch the driving competitions?"

What a silly question!

So off we went and had a great time despite rain.  The carriage driving at Walnut Hill seemed to me to harken back to a more genteel time when everyone dressed nicely and no one seemed in a hurry.  I found it much more enjoyable than watching the driving classes at the state fair.  That's probably not fair to the people at that venue but with the ring being outside, seating under the trees, no crazy music or noise from the midway, white tents with white tables and chairs where you could sit and sip the cocktail made for you by the honest-to-gosh white jacketed bartender....  it's just got a totally different feel than other shows I've been to.

The 'barns' for housing the horses were actually specialized tents. There were several tent barns set up and I saw license plates on trailers from as far away as Florida.   Clearly the horses were all well mannered and refined too since the walls were only canvas.  Staying in your stall was more of a polite suggestion than a command.  ;-)

Exhibitors were busy with horses and equipment, either getting ready for their next class or rinsing the mud off the carriage wheels from the last outing. 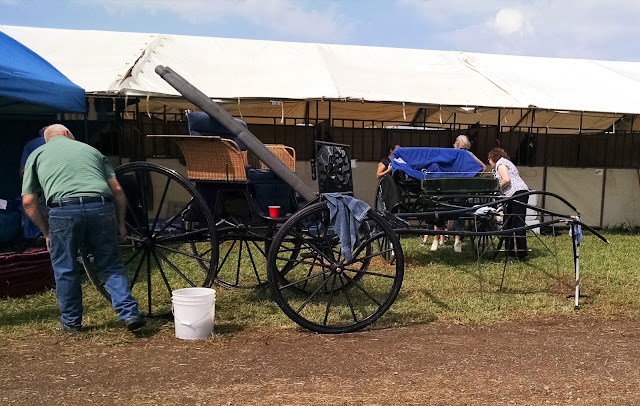 This cart looks like the carriage world's version on an ATV!  I'm guessing it's made sturdy for training. 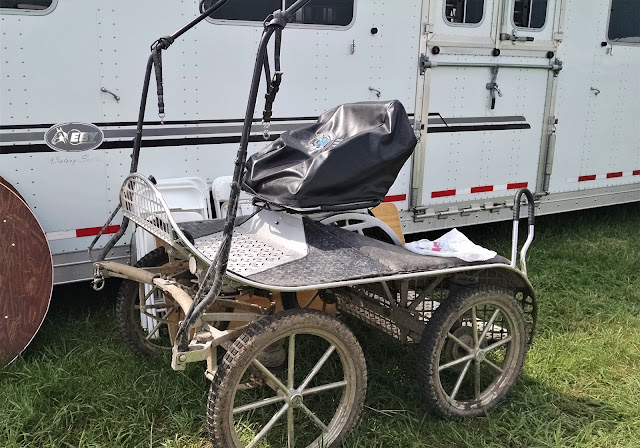 It wasn't really possible to get close to the horses during the actual classes.  These four-in-hand teams had just finished their class when we came onto the grounds.  Such a grand sight to see teams of four horses turned out so beautifully with shiny harness and bright paint and footmen in uniforms.  It's easy to see the romance of that lifestyle, especially from the safety and security of 2017. 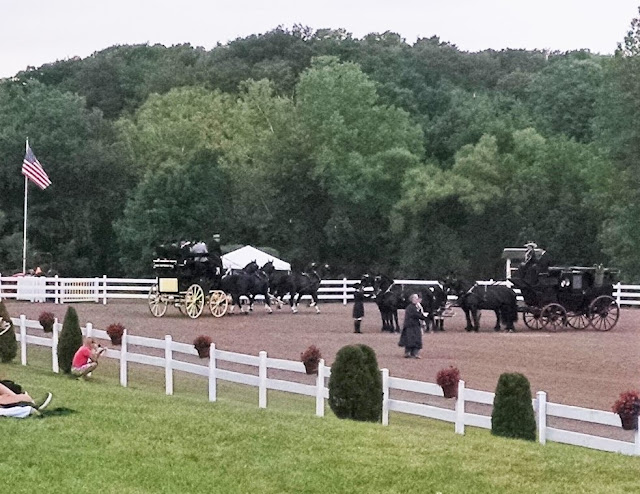 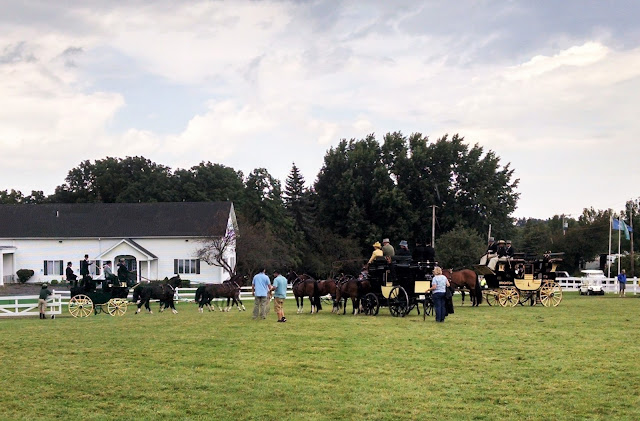 There were a few classes particularly for ponies while we were there and charming little ponies they were!  It was a pleasure to watch them clipping along. 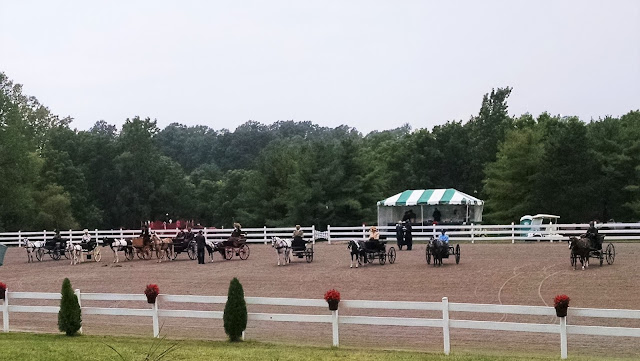 It's a little pixilated but look at the white Shetland pony second from the left.  So cute and little when he was trotting it made my voice go up an octave.  ;-) 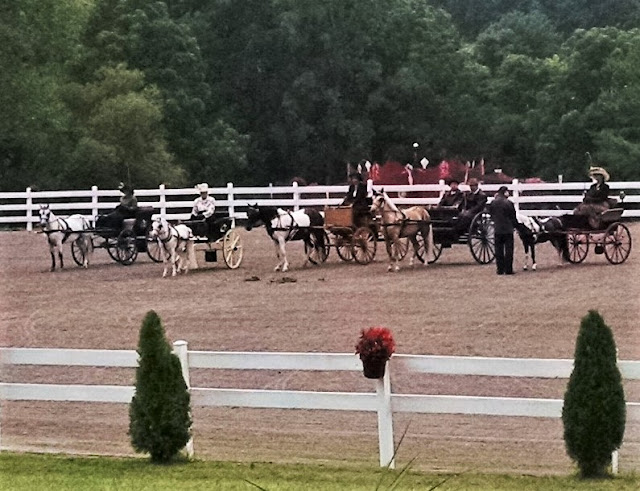 And the vendors there were primarily horse oriented in one way or another, whether driving or fox hunting, or offering equipment, or painting portraits of your horses or dogs from photos.  Although, some how these guys snuck in.  And really, who doesn't need a pig made out of horse shoes? 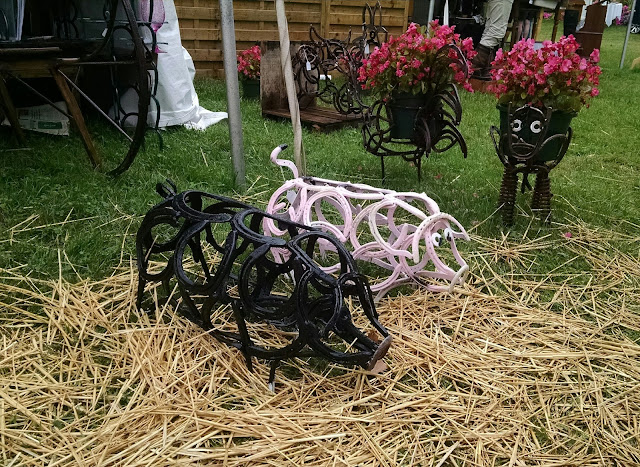 But the art for sale is what impressed me the most, in particular a booth filled with hand painted furniture.  One would have to have the right home (and coordinating wallet) to bring these pieces home but did I ever drool over them.  Trust me, the pictures don't do them justice.  (Pics taken with permission of the artist). 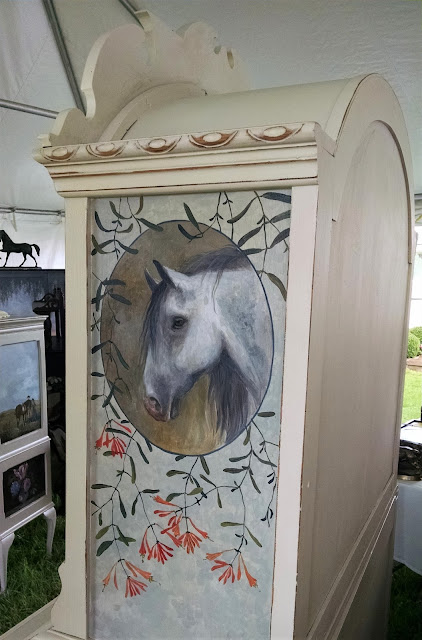 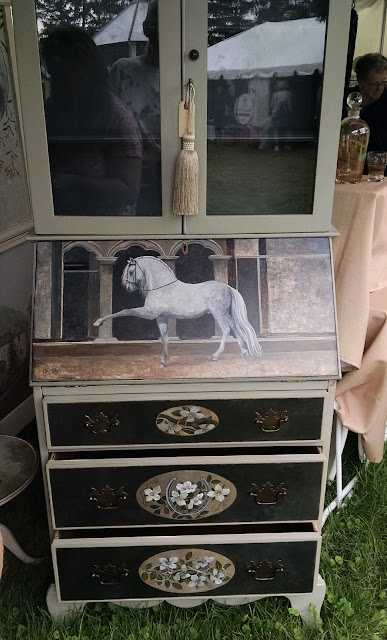 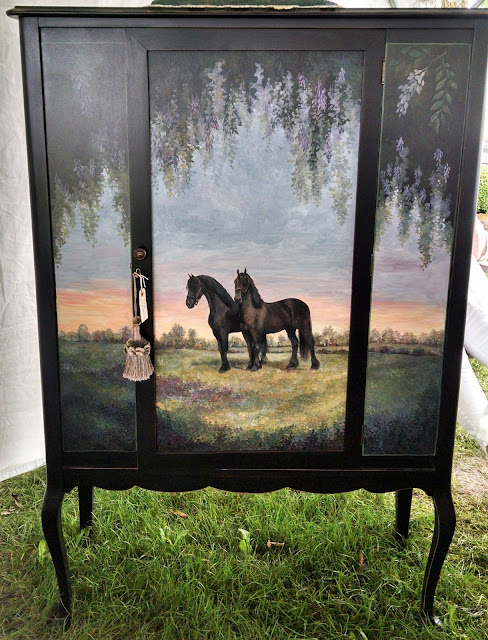 And even though it was an equestrian venue I still found wool!  A pair of beautifully needlefelted purses - a clutch purse size and matching coin purse. 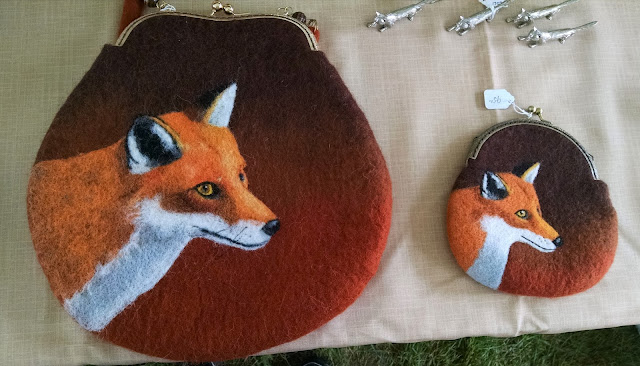 We caught one last class on our way out - the Old Guard's class, wherein all the drivers were required to be 65 years or older.  By then the sun had come out and it was a delight to see all the exhibitors and think that they were all enjoying their passion, and managing it just fine, well into their 'seasoned citizen' years.  May we all be so lucky!

There's that teeny white Shetland pony again, in the center!

And the class winner drove an interesting unicorn hitch of three horses. 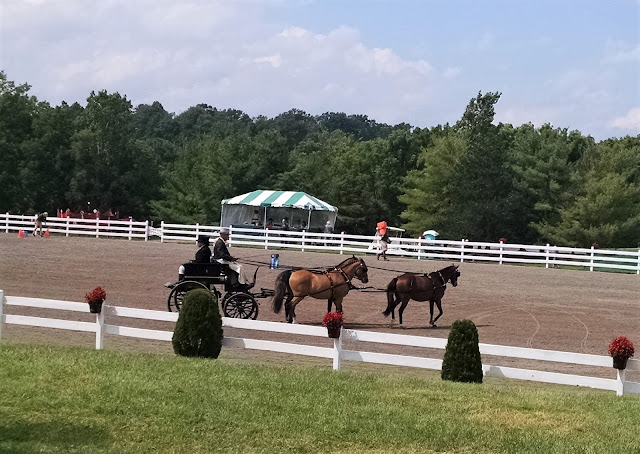 If you've never gone to this event I encourage you to mark your calendar for next year.  The show runs for five days and any one of them will be a treat to watch even if you aren't a bona fide 'horsey girl.'