Since the storm last week it's never really stopped snowing.  Some days just a little, yesterday another 7 inches for us.  We now have an amount that proves it's actually winter. 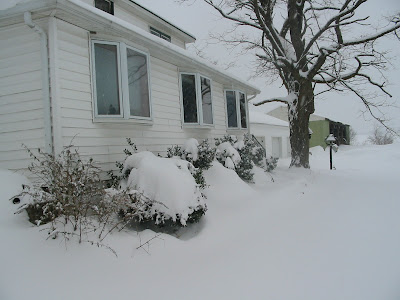 There was a lot of wind with the snow yesterday and we have this funky snow stalactite hanging ominously off the eaves right by the side door. 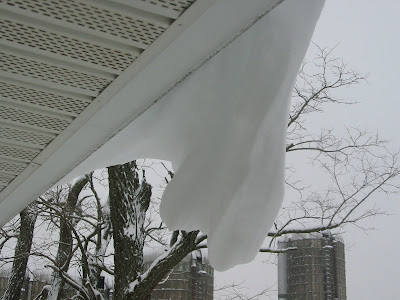 Speaking of the side door, this little chrysalis appeared one day late last fall in the metal doorframe of the sliding screen door.  The picture doesn't do it justice - it's quite elegant and even ornate with little points and bumps on it - and the picture doesn't show it but there is the thinnest, finest strand of fiber you can barely see that's working like a guy wire or belt and helping hold it in place.  How the heck did he throw out a strand of something from INside the case?  Anyway, I've become quite protective of "him" and take care not to knock him off with a careless hand on the doorframe.  It's in kind of a dangerous place what with going in and out ten times a day, but there's no danger of using the screen door so if we can keep from being clumsy for a few more months I hope to see what kind of butterfly comes out in the spring. 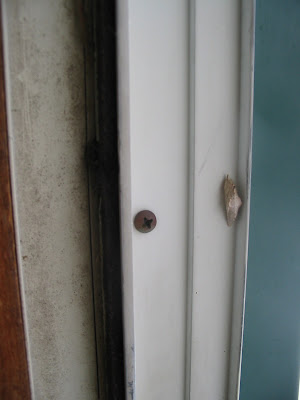 And with Christmas past and gifts given I can post a couple of other things that went to new owners.
An alpaca scarf I spun and knit.  I looked through a book of stitches till I found one that was A. easy and B. I liked the look of.  I figured out how many pattern repeats would give me the width I wanted and just knit till the yarn was gone. 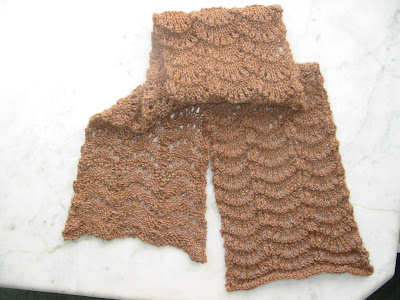 And then this scarf came from the guild's "stash stew" fiber and was the lot that I got back for what I put in.  The pattern is basically The False Entrelac pattern from Ravelry. 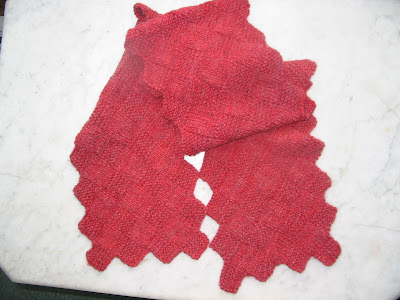 So I had two items to knit for Christmas and they both got done in time.  And since Christmas I've assimilated 90% of gifts received and. written. thank. you. notes.  This is a big one for me.  I'm always grateful for gifts, but usually hideously slow to send a written thank you.  Finally.....did it right.  There is still some clutter laying around.....I mean, how can you pick up bags when Dexter HAS to sit in them? 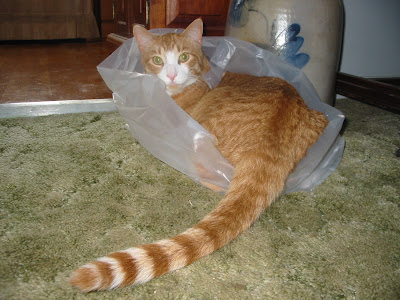 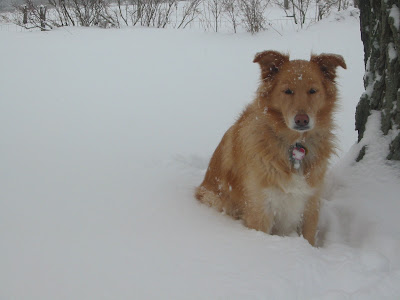 From Festive to Fierce

What a difference a day makes.  Yesterday's snow was fun and pretty.  Then the wind picked up at night, the temps dropped and more snow fell.  Power went out at 1:30 AM prompting Andy to make a trek outside and across the yard to the generator.  (Thank you, Mr. Generator.).  It was off till 7:30-ish, back on for an hour then went off again.  More generator usage.  Then it came on around lunch time.

We like to joke that this kind of weather keeps the riff-raff off our hill. 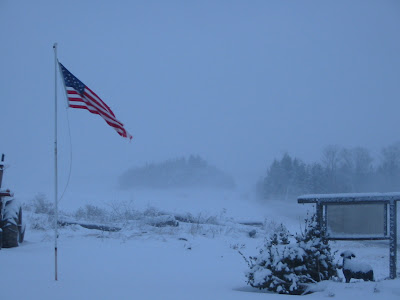 The view was equally bleak from the door of the sheep barn. 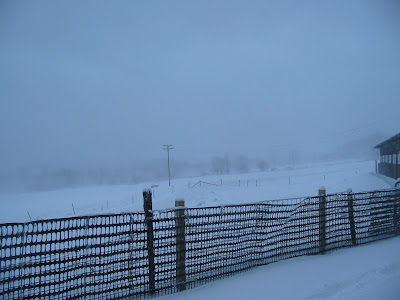 The wind worked snow into every crack and crevice and blew it in the open barn doors so that many of the sheep had a coating on their backs even inside.  They really didn't mind at all, but I don't like that it will make the bedding damp.  It drifted quite a bit too around the house and buildings so that getting from here to there became a tiresome trudge.
Holly was a little happier with this kind of snow. 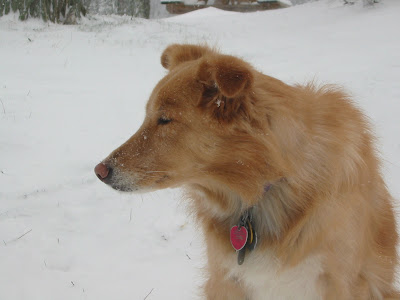 Whazzat?!  Is that one of them there riff-raffs?
Hoping for quieter weather tomorrow.  Still have last minute shopping to do!﻿
﻿
﻿
Posted by Sheepmom at 7:06 PM 6 comments:

It wasn't seeming very Christmasy until today.  Having been above freezing everything was the brown and tired green of pre-winter, then we graduated to mud.  Today we woke to some real snow. 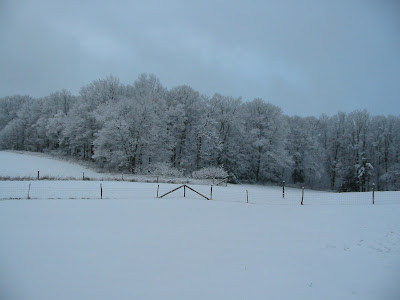 Everything is totally coated with a wet sticky snow which is very pretty.  Unfortunately, being the shortest day of the year and also under heavy clouds it's a dreary day otherwise.  There isn't any wind to speak of so the snow is all staying on the branches. 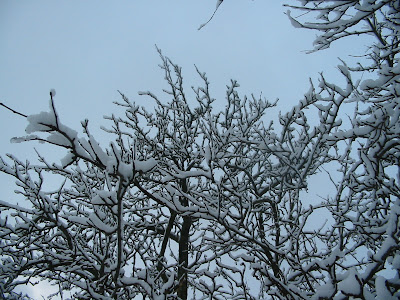 ﻿
﻿
It's heavy enough to weigh down flexible branches and make graceful arches on a boring hedge. 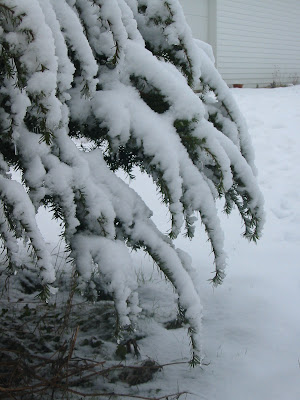 Holly seems to be listening to the snow fall.  Being just a little wet and slushy it does make a faint hissing noise as it lands. 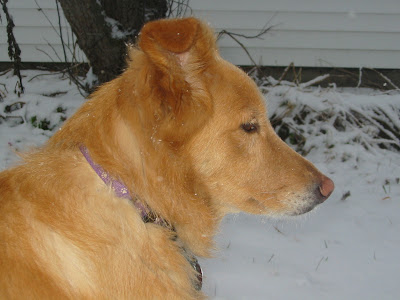 Dexter is happy to stay indoors and vulture from atop the grandfather clock. 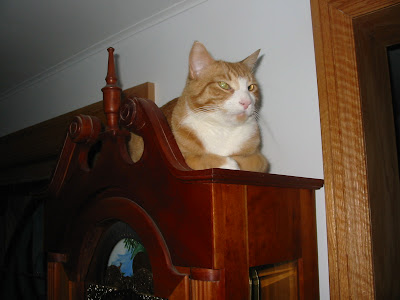 All this excitement over snow.  Meh.
I'm very close to being done with collecting presents for Christmas.  Just a few things yet to find.  I've made several things too, but can't blog most of them for fear the recipient will see them.  Here's one thing I painted which is going to someone who isn't likely to see it, so I'll risk it. 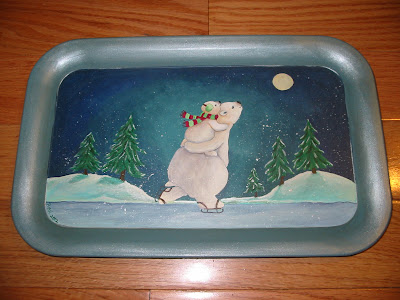 I can't claim originality - I copied it off an old Christmas card - but I do like the way it turned out.  After Christmas I'll post a few other things I did.  It takes me so long to complete a project that no one is in danger of finding constant homemade gifts tiresome!﻿
﻿
﻿
Posted by Sheepmom at 6:58 PM 2 comments: 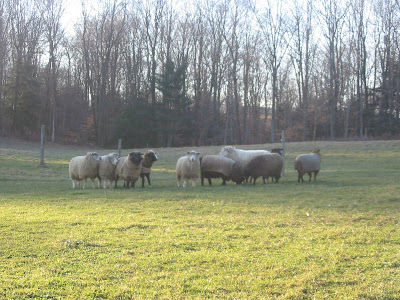 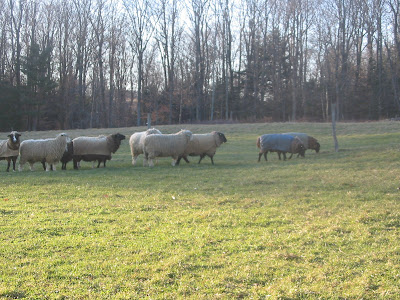 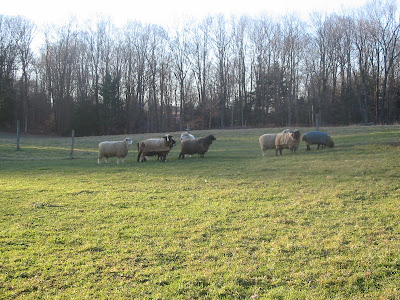 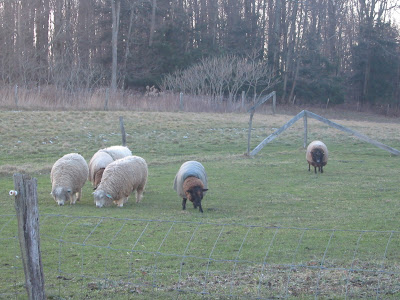 Tomorrow they can go out into a large pasture where there is a little more to eat.  They are getting hay at night when they come in so they don't really have to go out and make a living, but until the weather closes in for real they can go through the motions if it makes them happy.
That's it, guys.  This is your routine for the next ten months.
Could be worse.﻿
﻿
Posted by Sheepmom at 1:56 PM 3 comments:

We had a very pretty sunrise. 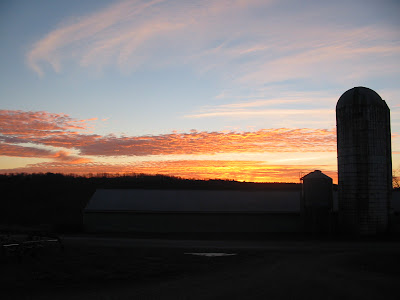 This is the thermometer on the north side of the house at mid-afternoon.  Since this is December 4th I figure this weather is definately of a magnitude higher than mere Indian Summer. 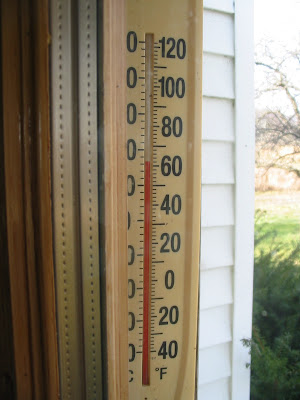 The sheep are too warm.  That Andy is too warm.  Holly is too warm.  I am Not Cold. (OK, I'm wearing a sweatshirt and flannel lined jeans but in my defense I was dressed the same way in September).
The little dandelion and I are going to celebrate the day! 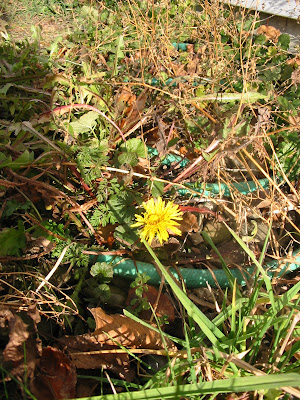 .......that you might be spending a little too much time in the barn when your cousin tells you her daughter and husband are expecing a baby next year and you say......

"Oh my gosh, congratulations!  That's such great news!  I didn't even know she was trying to get bred!"

Oy, I think I have to brush up on my people skills before I start mingling with humans again during the upcoming Christmas season.
Posted by Sheepmom at 11:32 AM 9 comments: