We had seriously considered not producing any more lambs.  The barn is full of animals and I don't want to 'get rid of' anyone, either selling into another flock or <shudder> send to auction.  As we have chosen to discontinue the freezer lamb part of the farm business it was hard to justify producing animals without a specific need or purpose.  And, knowing how long our sheep tend to live (we have three right now who are fifteen years old) part of our long range plan was to let the flock dwindle from natural causes until in a dozen years there would be just a few that us old farmers could manage.

But.....having been contacted by a few buyers who really, really wanted lambs in the future we decided (OK, it was pretty much just me) that we'd expose a maximum of ten ewes to three different rams.  While my decision to not breed again didn't hold, I can say that we are D-O-N-E with trying to shear and lamb in frigid winter weather.  Sheep gestation falls quite reliably between 145 and 149 days so one does the math, looks at the calendar and sets the schedule.  The boys were put with ewes in mid-December so the earliest possible lambing date is after I return from the Maryland Sheep and Wool Festival in May.  Likewise, they are scheduled to come out shortly so that the last possible date will be before I attend the Central New York Fiber Festival.

In the non-Cotswold group we have big handsome Brick in with Taffy, Macaroon, Tiffany and Violet.  They are all super crimpy medium wools, and Brick should add some length and solid body to them.  All except Taffy carry moorit genes (Tiffany herself actually is a moorit herself so that will double her odds) but the color is a recessive trait so it will depend on how the genetic dice roll.   I would love to get a moorit lamb or two as some of my very old girls like Ruby and Foxy won't be around much longer.  All have been covered by him and Taffy has repeated.  I'm not too surprised since she's fat as a market hog over conditioned and may not conceive at all but I'm hoping his full attention during the second heat will have done the trick. 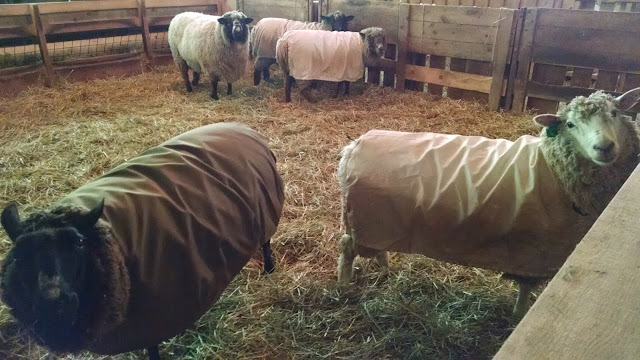 Old Isador is the last able-bodied F1 (first generation) Cotswold ram from the AI we had done ten years ago using a British ram and I really hated to not ever see lambs from him again especially since I have such nice young ewes who aren't related to him.  He has a group of three -  Paige, Peggy and Olivia. 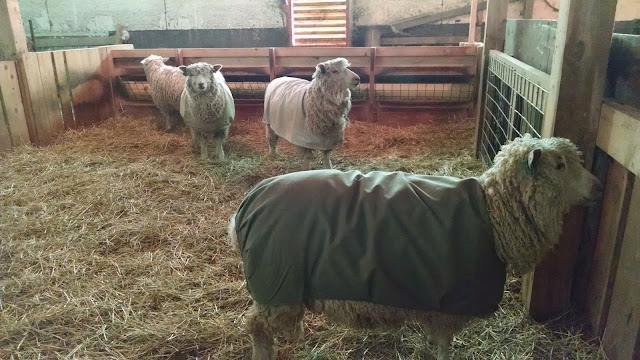 The third group is exposed to the young colored Cotswold Norris.  He has three ewes - Lovey, Ophelia and Oleander.  Lovey is two-tone gray like Norris.  The other two ewes are white but have colored parents so the chances of colored lambs from them is high.  And white would be OK too as I'm sure the fleeces will be lovely.  They are housed in a long but narrow ad hoc pen which will be fine for a limited time frame. 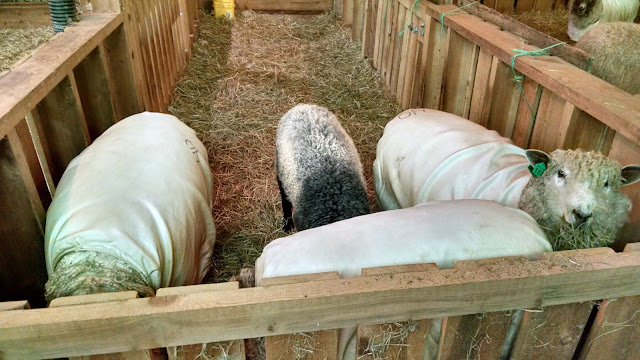 Once the rams have been returned to the bachelor barn the ten ewes will be housed together in the last pen on the floor where Isador's group is now.  We can feed them most appropriately if they are together.

So the die is cast!  We'll be lambing in May when the sun is shining and the grass is growing!
Posted by Sheepmom at 6:36 PM 4 comments: