Some days you know just what you have to do from morning till night.  Other days you look at priorities and weigh them against the weather, time available, what else needs doing and then figure out what the job of the day is.

Today there were a couple of big jobs.  First Andy serviced the haybine and mowed the first field to make hay. 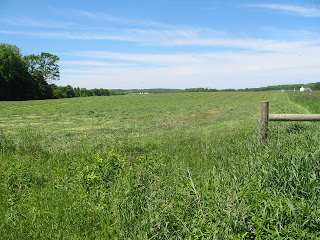 We mowed hay - expect rain in 2 days.
﻿
This is actually the upper section of the ram's pasture.  They have been excluded from it so far this year.  We let the field grow, take off a cutting of hay, and by the time it regrows to a nice lush carpet we'll be bringing the weaned ram lambs up here to live with the menfolk.  So far the strategy has worked out quite well.
While Andy was doing that I finished washing the last of the 3-ply sport weight yarn, and then we tackled this. 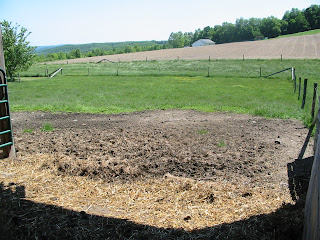 Doorway to the ram barn
﻿This area hs been churned into a deep muck hole by all the tramping in and out the rams do.  They drag litter out all winter and then with the constant rain in April and May they've turned it into a morass they can barely slog through and can't jump over.
Two pitchforks and 8 tractor buckets of slop later......... 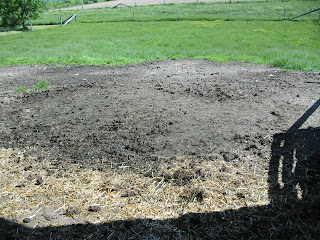 Down to bare dirt
And then half a dump wagon of mixed rock from the gravel pile....... 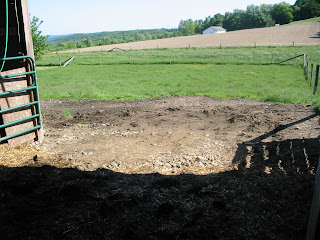 Problem solved
﻿Driving the skidsteer back and forth over it a few dozen times packs it down pretty good.  Heavy sheep feet will finish the job.
And while we've been doing that, Holly has been on her self-appointed job of waiting for Woody Woodchuck to make the mistake of poking his nose out from under the woodpile. 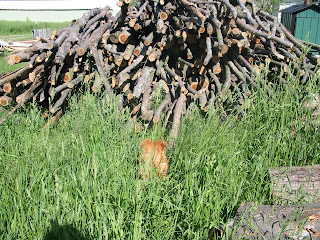 I know he's in there.  I can hear him fartin'.
Woody Wood's days are numbered.﻿
Posted by Sheepmom at 6:59 PM