When the work goes as it should you can get a lot done.

We had a full day earlier this week. We started with chores, then coffee and breakfast.  After a fast glance at the paper to be sure nothing happened overnight that we needed to know we sent the ram boys out to the big pasture for the day.  Elderly Mr. Lincoln takes the lead. 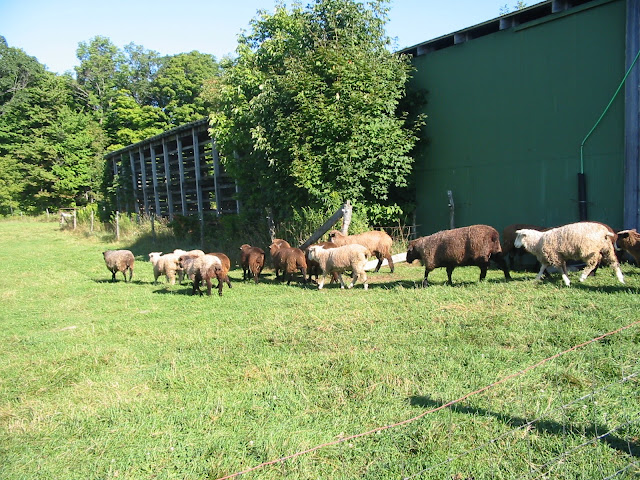 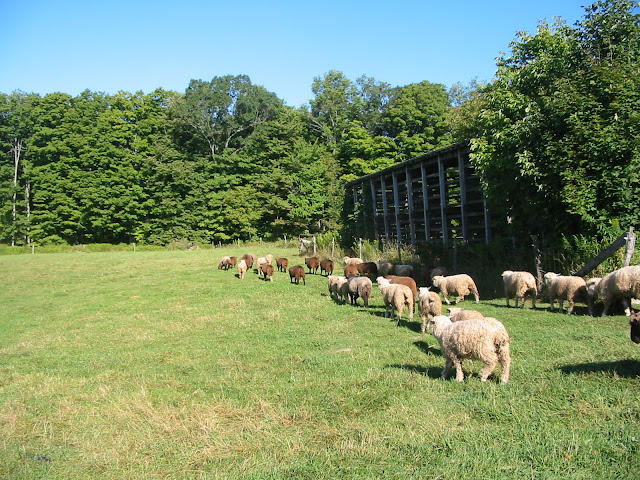 After seeing that everyone went out as they should we went to the lower barn, set up the weighing equipment and put all the ewes over the scale, checked eye scores and dewormed those who needed it.  We had done the rams and ewe lambs a few days prior.  It's too much of a marathon to do all the groups on the same day.  The sheep moved along relatively smoothly and we were done by shortly after noon.

A fast lunch of odds and ends was followed by going right back out.  Andy needed to unload the two wagons of oats from the day before, so the elevator had to be brought down to the grain bin, maneuvered to deposit the grain through the fill hole and then he had to position each wagon such that the grain would spill into the elevator hopper.  It doesn't sound like it would take that long but there is a lot of back and forth hooking and unhooking of tractors to get it accomplished.

As soon as the wagons were empty he headed down the road again with the combine to finish the oats.  The Amish were baling the hay that had been raked the day before.  I missed a picture of a very small boy gathering the hay but did get one later with a young man driving the team.  They were gathering the hay and bringing it to a stationary baler run off a gasoline engine. 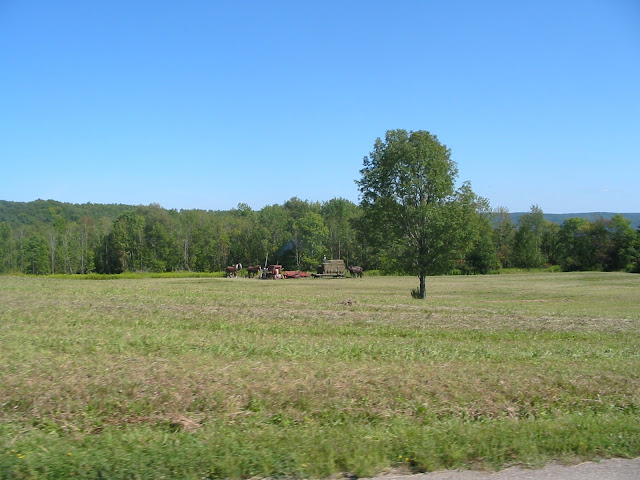 The apparatus they had for collecting the hay was simple but seemed to perform its function pretty well.  It worked like a giant comb being dragged over the ground between the horses. 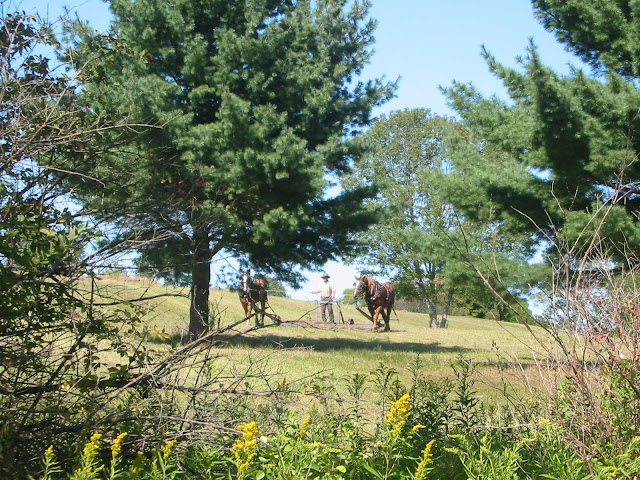 The hay gathered on top of the big teeth and accumulated in front of the wooden backstop. 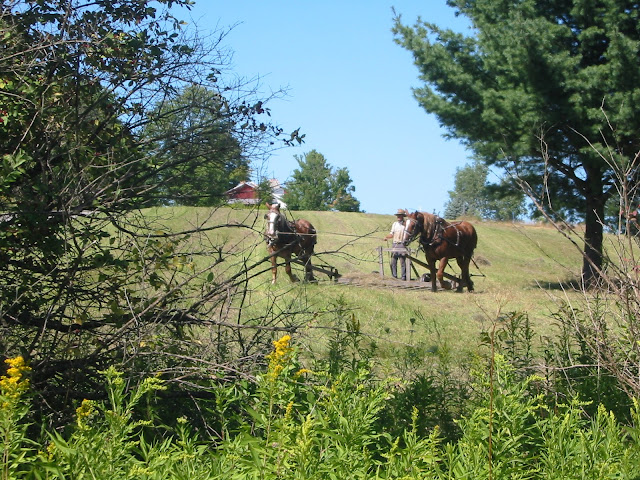 Apparently the youngster I saw earlier had missed a few piles and this other fellow was going around gathering them up. 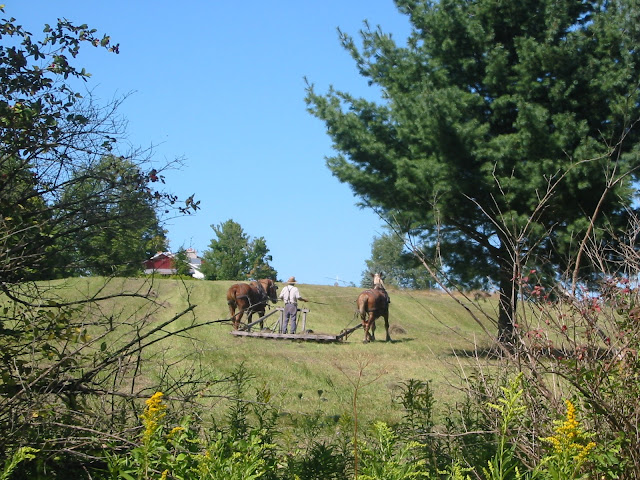 The day after we finished the oats Andy was able to bale the straw - 287 bales - and we'll probably 'store' it on the wagons since it's not quite so inviting to rats as it would be in the mow.  The combine didn't thresh the oats off as well as Andy would have liked so we know the bales will be attractive to rodents.
The sheep were happy out in the pasture this evening when Holly and I took our walk.  These lambs near the fence were curious about us. 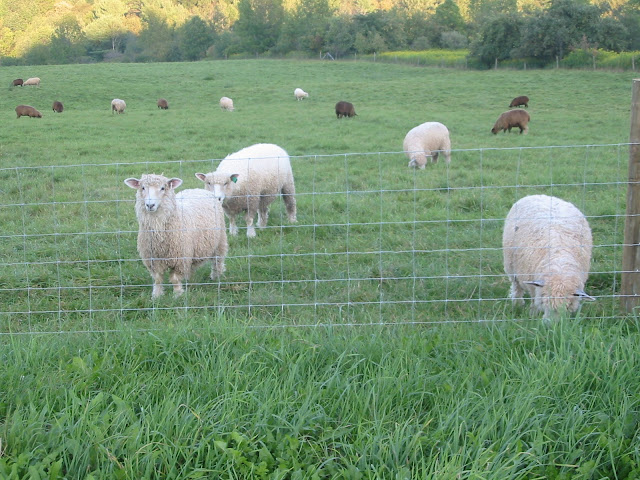 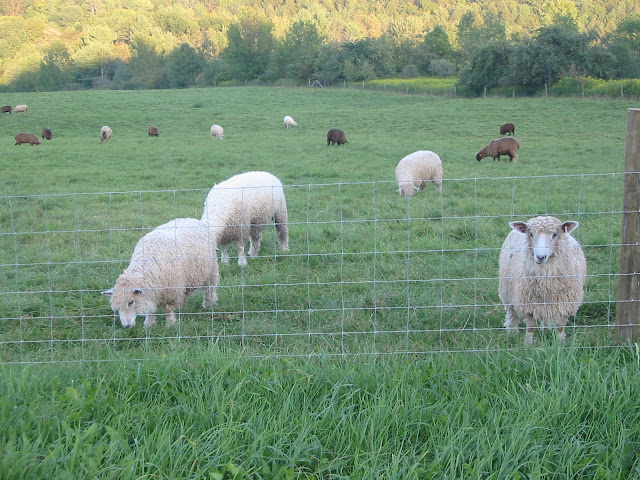 I kept catching this lamb in mid-chew.
﻿ 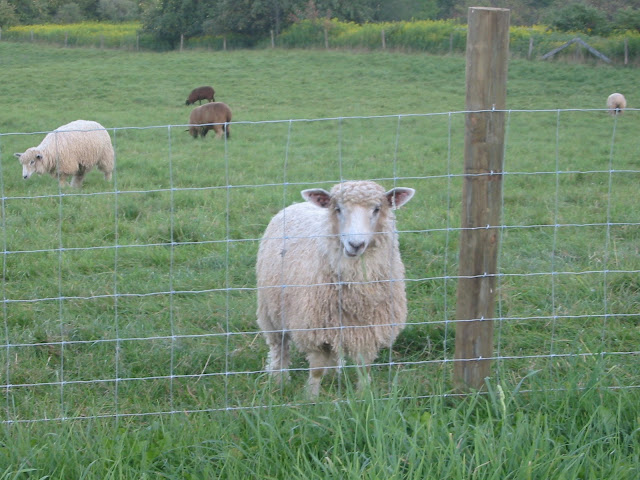 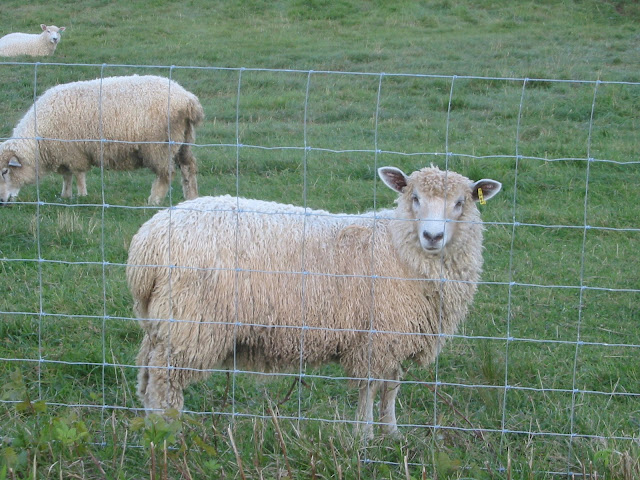 Here's hoping for some more productive days ahead.
﻿
﻿
Posted by Sheepmom at 6:47 PM