Hope Skittles doesn't sue me for copyright infringement.  ;-)   To be accurate it's more a case of 'spin the rainbow'.  A few years ago the spinning guild had a fun activity in which you could chip in fiber from your stash - any color and type of fiber but it had to be ready to spin - and Diane at Acorn Works recombined all the contributions into some very fun rainbow gradient batts.  The fiber I put in earned me four batts back.  One I gave away but the other three are finally being spun up. 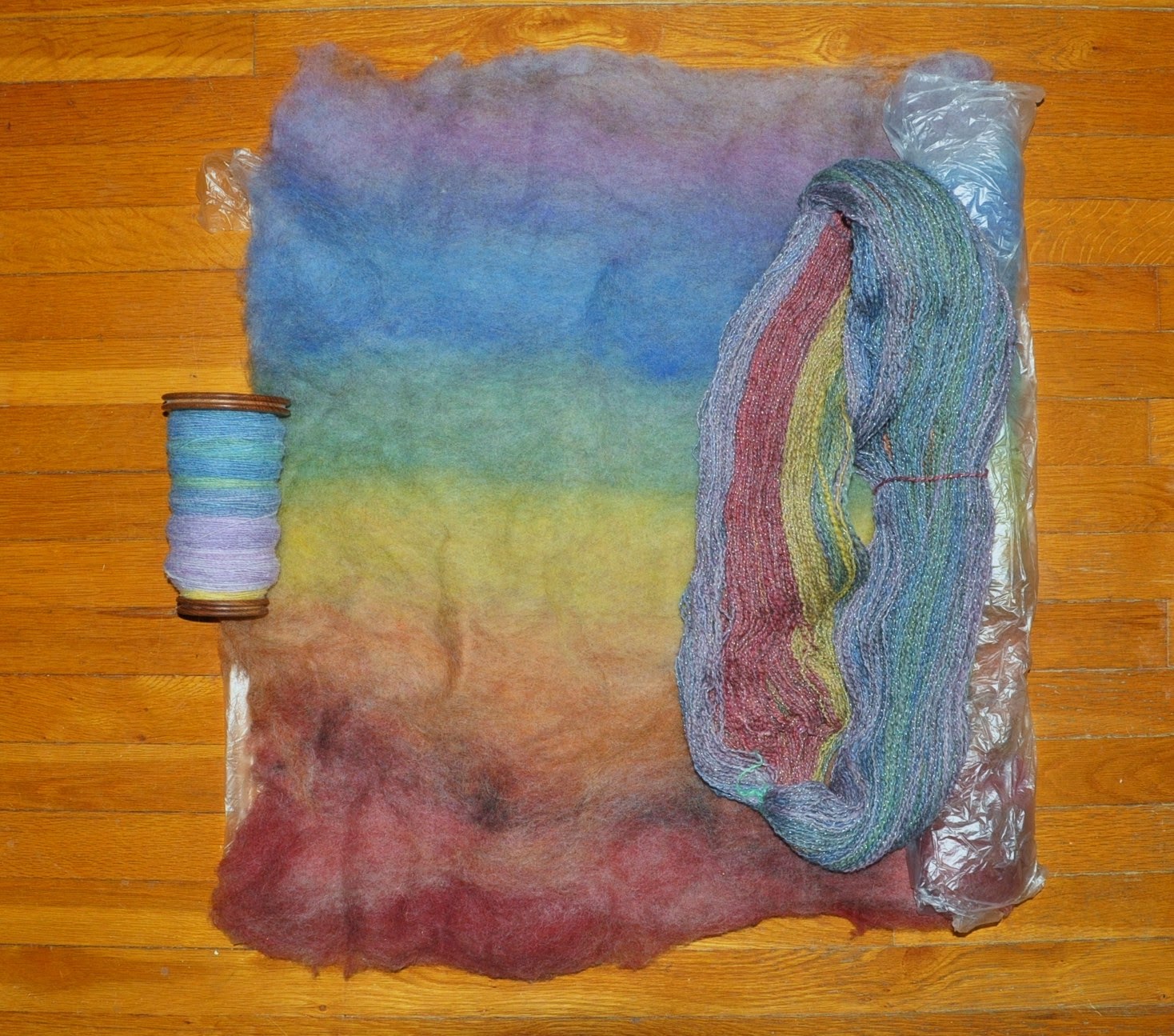 This batt is the same shade of rainbow as the skein at right.  It's a somewhat subdued gradient with an almost gray overtone.  The singles on the bobbin at left is from a batt that was much brighter and not muted.  I only had one like that as the one that I gifted was a bright one.

The whole point of a rainbow is to preserve the color shift in the finished yarn.  I could have unrolled the batt and divided it into two shorter batts of equal size and weight, carefully pulled off strips from one edge across to the other, spun two bobbins of ROYGBIV yarn and prayed hoped that the lengths of each color were close enough that when plied together the color shift would remain pretty much intact.  I didn't feel that ambitious at the time so I just started at one edge and made strips, spinning each in order to get a big bobbin of rainbow yarn.  Now what? 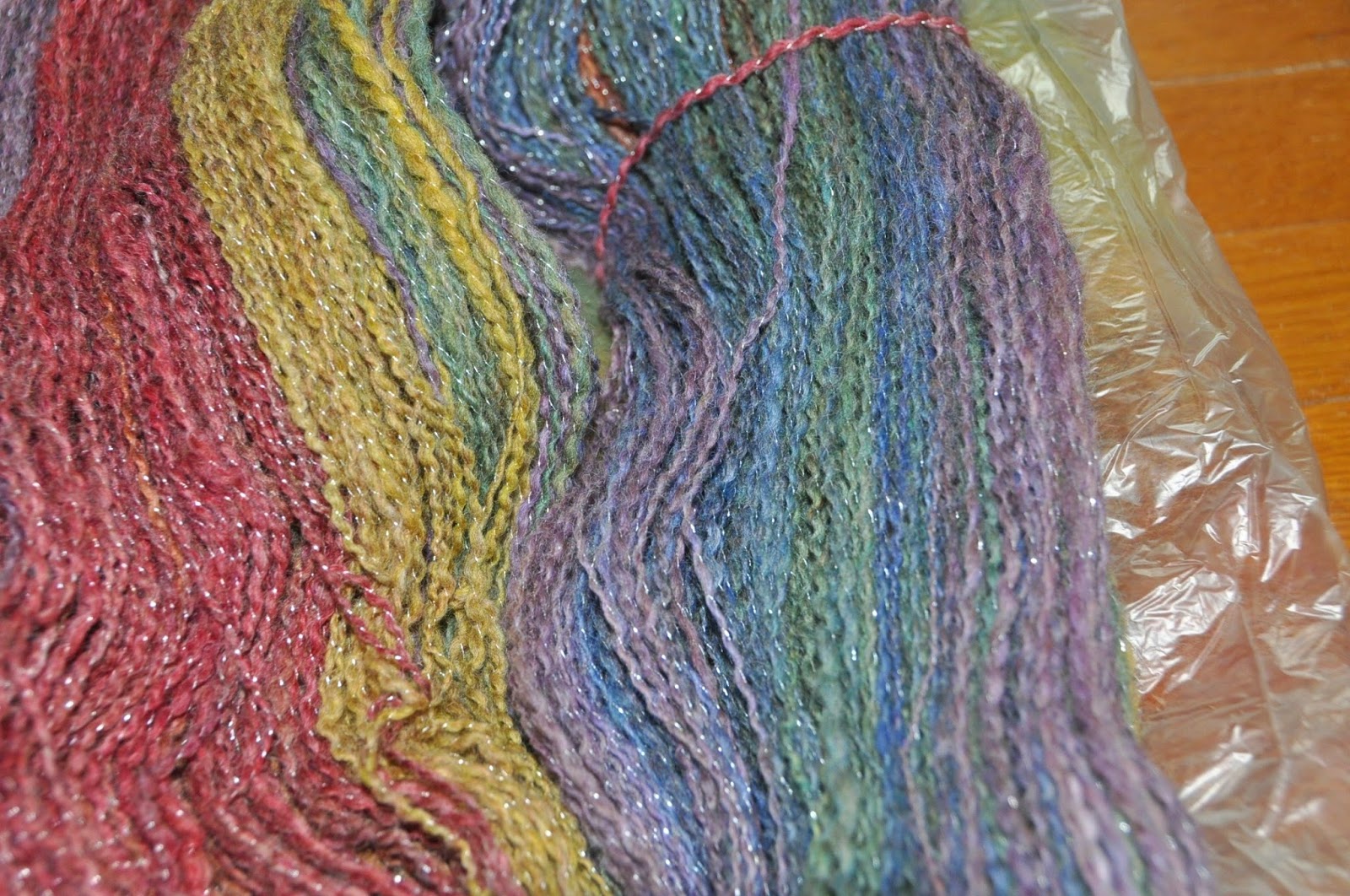 I decided to experiment and ply it on a strong metallic thread.  I saw it done on a video and it looked easy enough although the glittery part is a bit out of my normal rut method of making yarn.  This skein is 570 yards, so enough to be worthwhile.  It's also now a yarn that's thinner than I'm used to working with since the thread didn't add any bulk.  I didn't think that part through too well :-/

It IS pretty to look at, though. 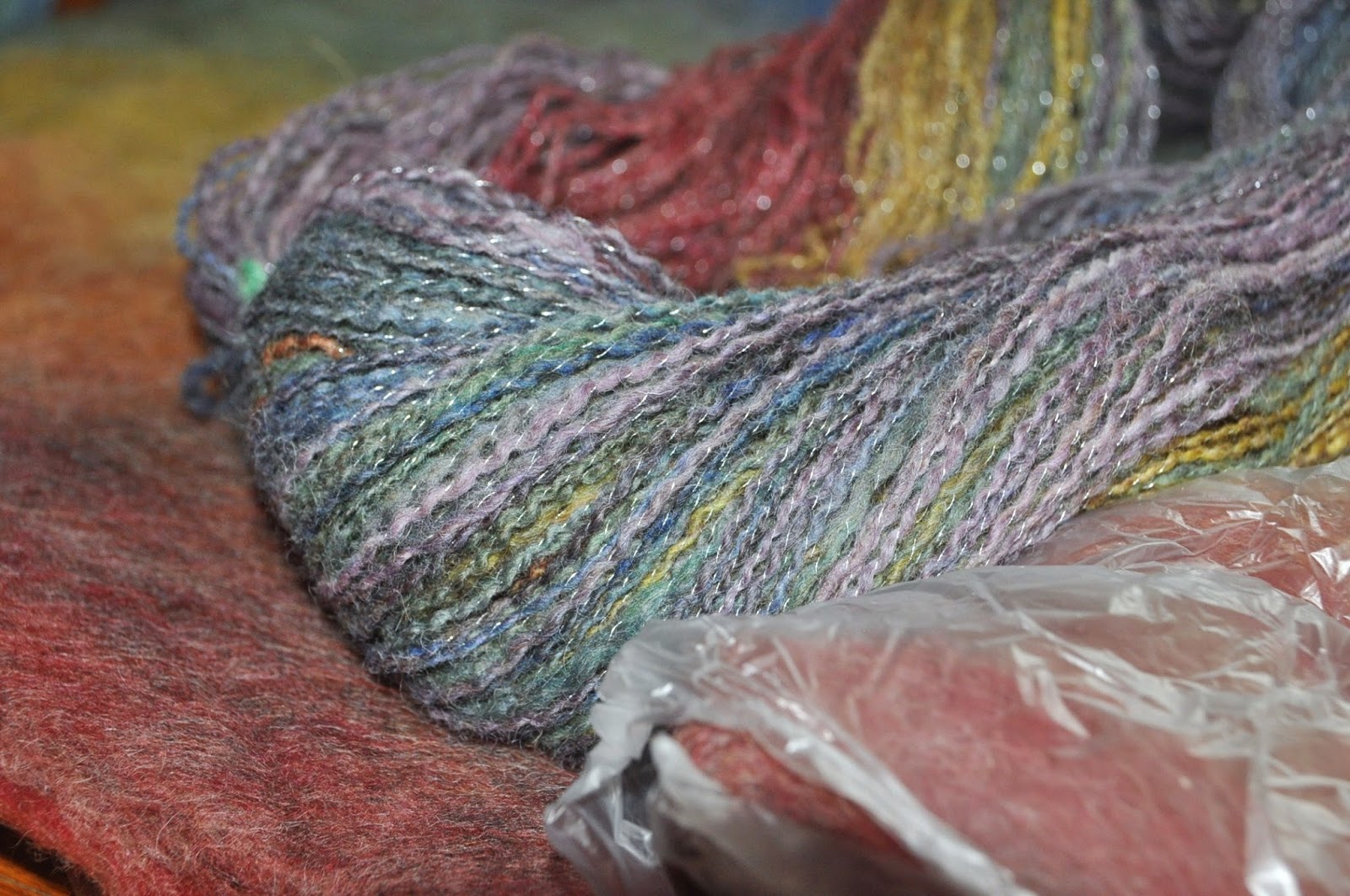 I'm not quite sure what I'm going to do with the second batt.  *Maybe* I'll do as I outlined above and try for a two-ply yarn with colors that match up well enough to preserve the rainbow. I'd have to spin a pretty consistent singles.  Hmmm.  The brighter yarn currently on the bobbin is also a question.  I could ply it with the same metallic thread or I could make a cabled three-ply yarn (aka Navajo ply) but when I tried that in a workshop last fall I wasn't jazzed with the way the yarn handled.  I found it kind of stiff and clunky.  I suppose I could ply it with plain white.....  Good thing I'm not this indecisive about everything!

In other fiber news I sent more wool off to become roving - a big ol' bag of white Cotswold.... 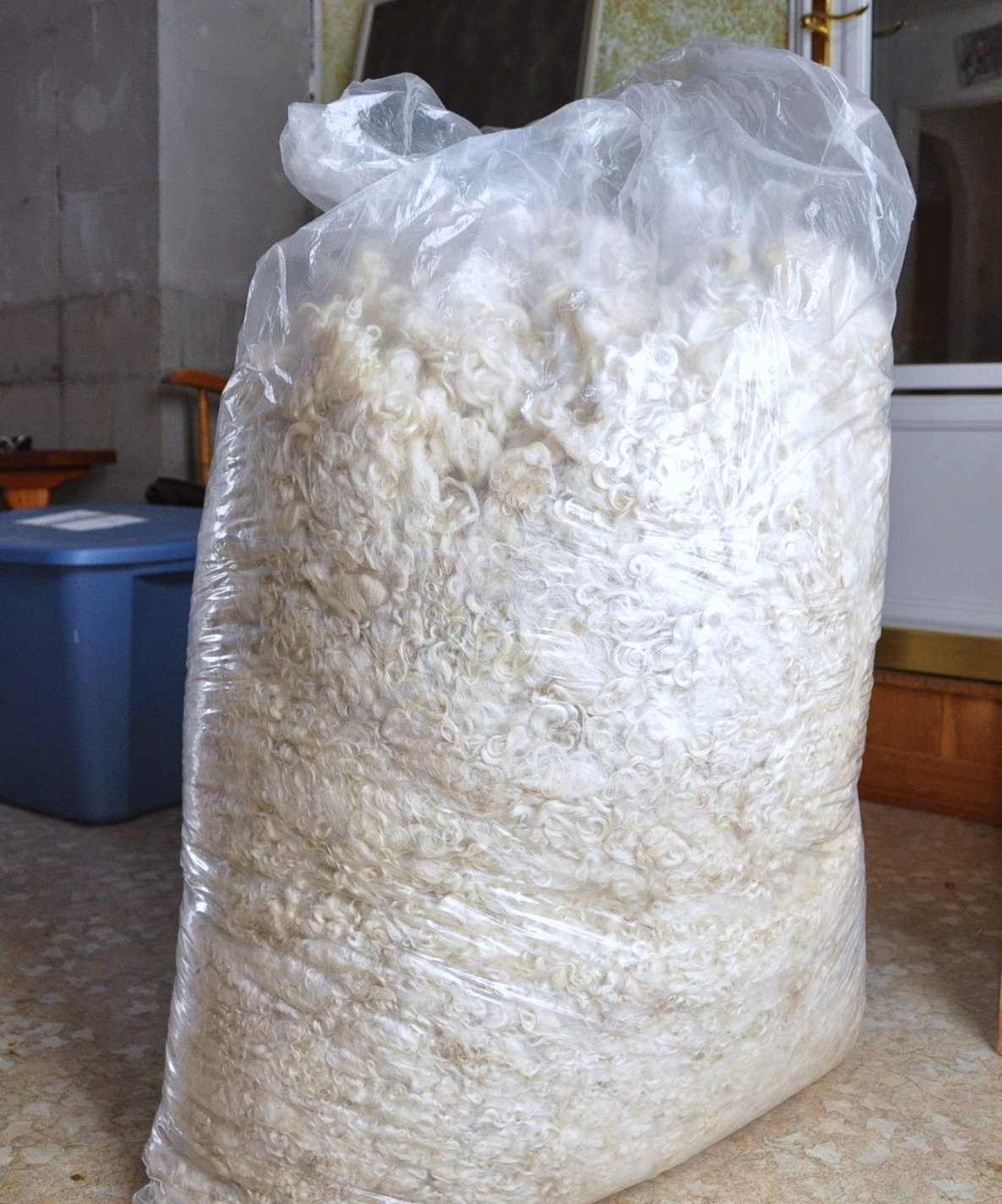 And a smaller bag of dyed Cotswold in a fun pumpkin-pie color. 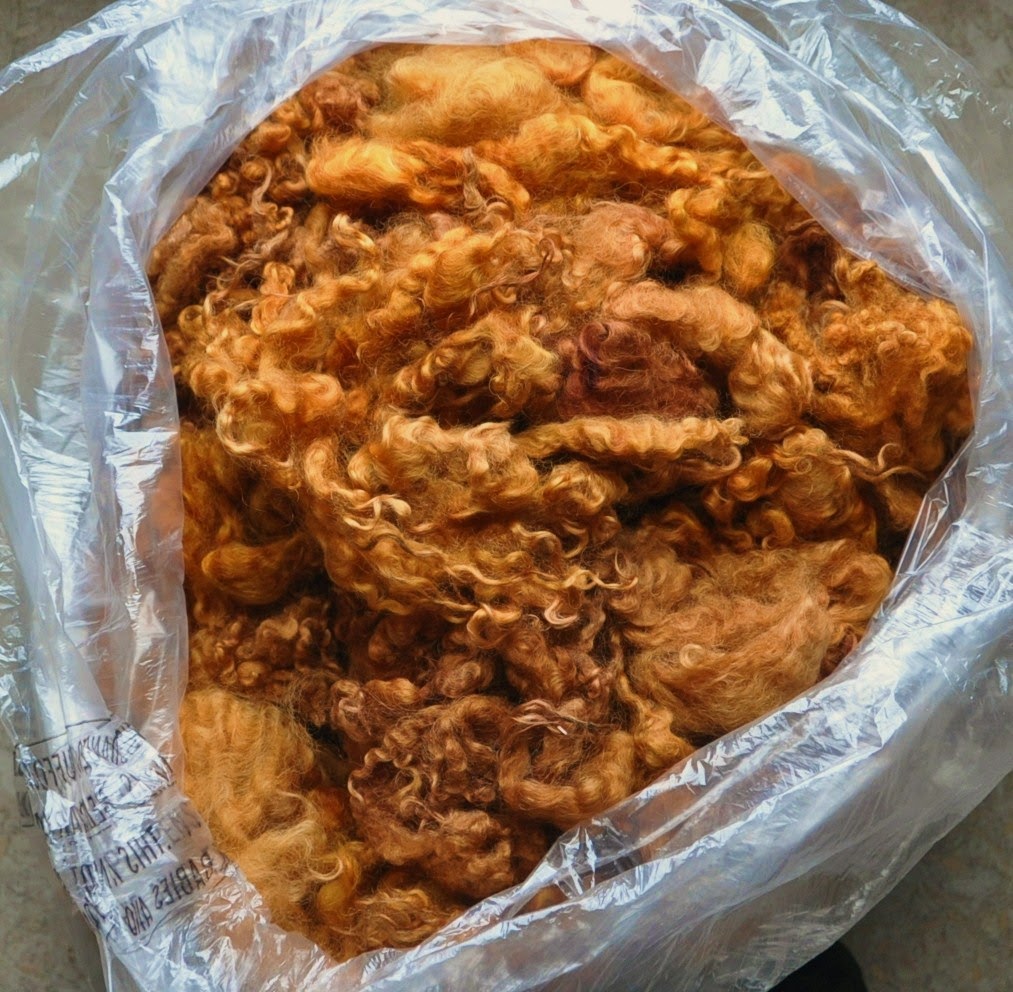 And some of the previous lots I sent have returned!  I've spun an ounce of each to make a sample and have yet to ply them.  (Just nice simple ply-back-on-yourself  two-ply.  Whew.) 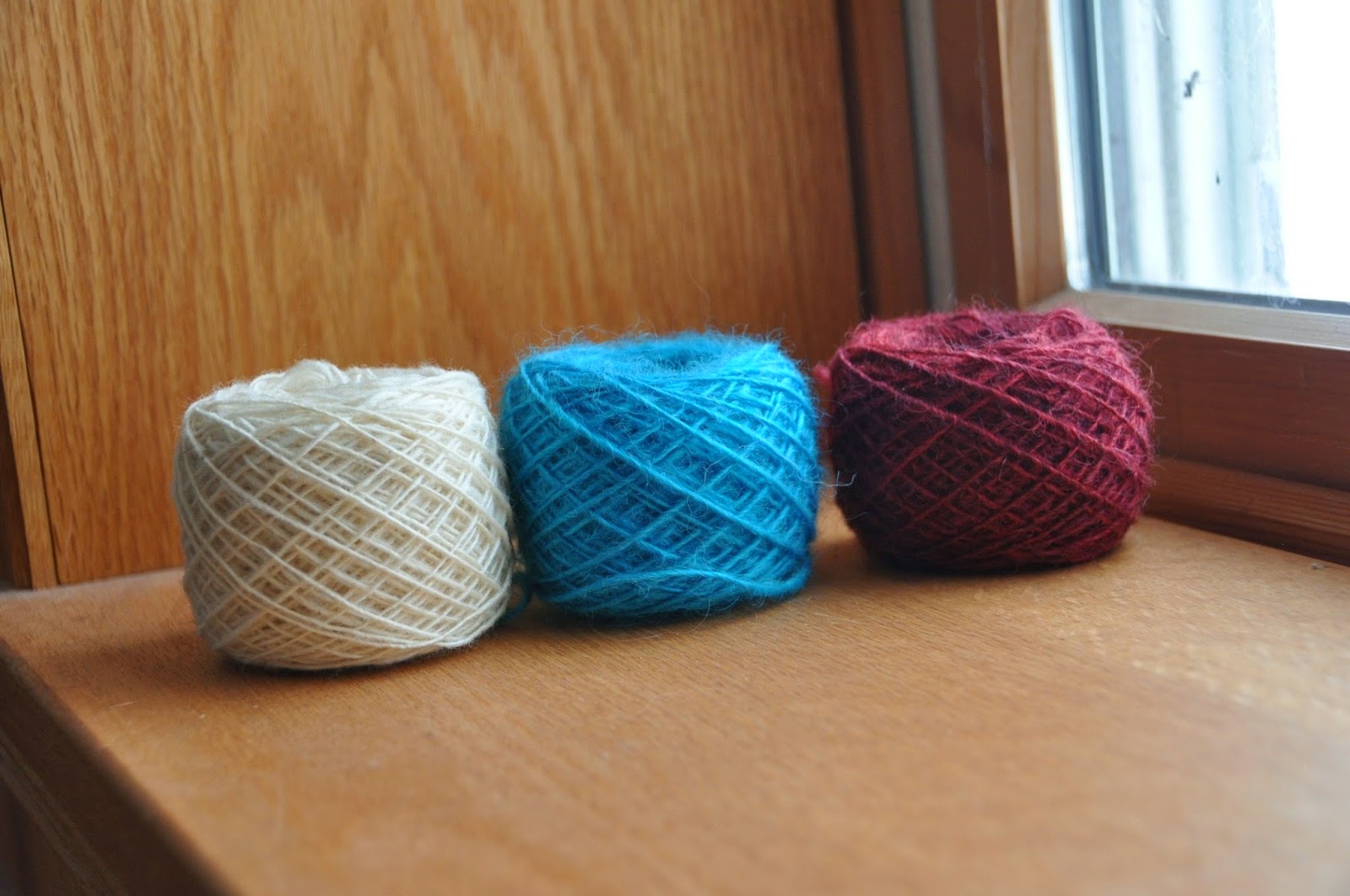 It didn't even occur to me until I set them next to each other that the grouping was so patriotic!

The coming week is supposed to be snowy and cold.  Bleah.  But we stay up on the hill and do chores and wash wool and keep the fires burning and live in our own little world, like this guy. 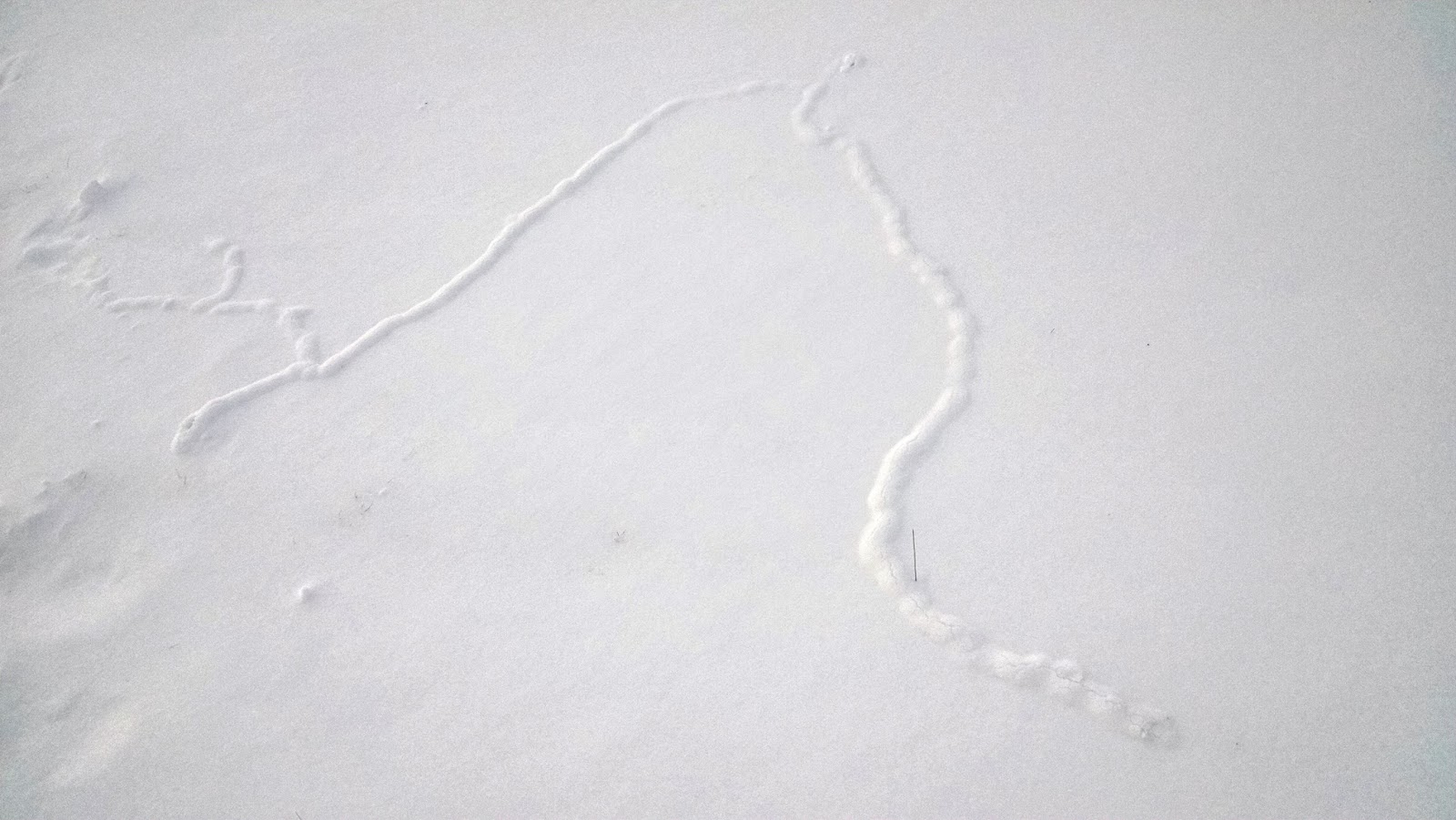 Hopefully we won't have to literally tunnel!  :-0
Posted by Sheepmom at 7:15 PM