Our 2015 lambing season has concluded with this hefty fifteen pound ewe lamb.  Isabelle is an experienced mom - she always has a single and it's always a ewe - and the lamb was scrambling up and looking for a meal in just a few minutes.


We ended with 48 lambs (from 27 ewes) of which 23 are girls and 25 are boys.  The sexes evened out toward the end - of the first ten lambs eight were rams.  I had expected many colored lambs but only got nine and of those five are boys.  We had quite a few ewes fail to conceive, also one aborted in February and another about two weeks prior to the first possible due date.  We lost one ewe to complications of pneumonia.  Despite a week of struggle on everyone's part she couldn't kick it and died leaving twin ram lambs.  Another ewe disowned one twin after a few hours which was very odd but she was adamant so there's a third bottle baby.  There are two sets of triplets and two ewes with twins who only have one teat working so several lambs are being supplemented.  Nobody risks going hungry around here.

One novel incident was a ewe with a uterine torsion.  Think of someone in a hammock that swings sideways until it flips all the way over, putting a twist in both ends. That's essentially the case here, and with everything twisted she couldn't deliver the lambs.  It happens in dairy cattle and we've seen it here in that regard but the vet said he'd never seen or even heard of it in sheep.  Oh, goody.  Every year we see some new, weird thing.  We were able to correct it by laying the ewe down, applying pressure to her abdomen to keep the uterus in place and then rolling her over - sort of rolling her around the lambs instead of trying to flip them over inside her.  Obviously we had to be super careful we were working in the proper direction!  We did it twice and it did work but the lambs had sadly expired, probably the day before.  We've been aggressive with pharmaceuticals on her and yesterday was the first day that she looked like she felt halfway decent.

So now that lambing is done I can sleep through the night again!  Woot!  All that remains is to band and tag the lambs and trim feet and deworm the ewes before turning them into mixing pens.

In other news, we had a shearing day and got started on the fiber flock which wasn't bred to lamb this year.  Being under less physical stress really shows in the fleeces - they are all looking really nice this year. 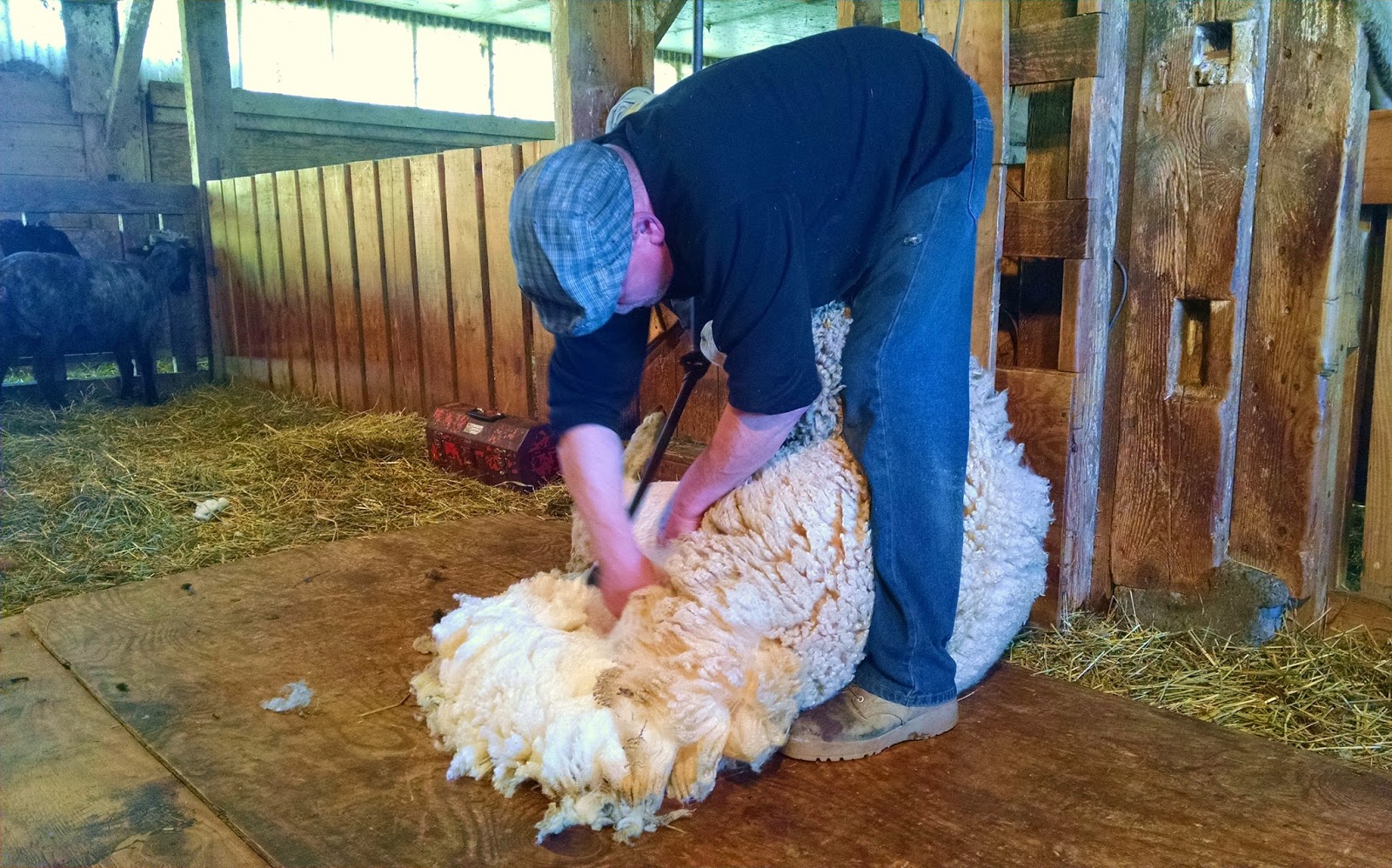 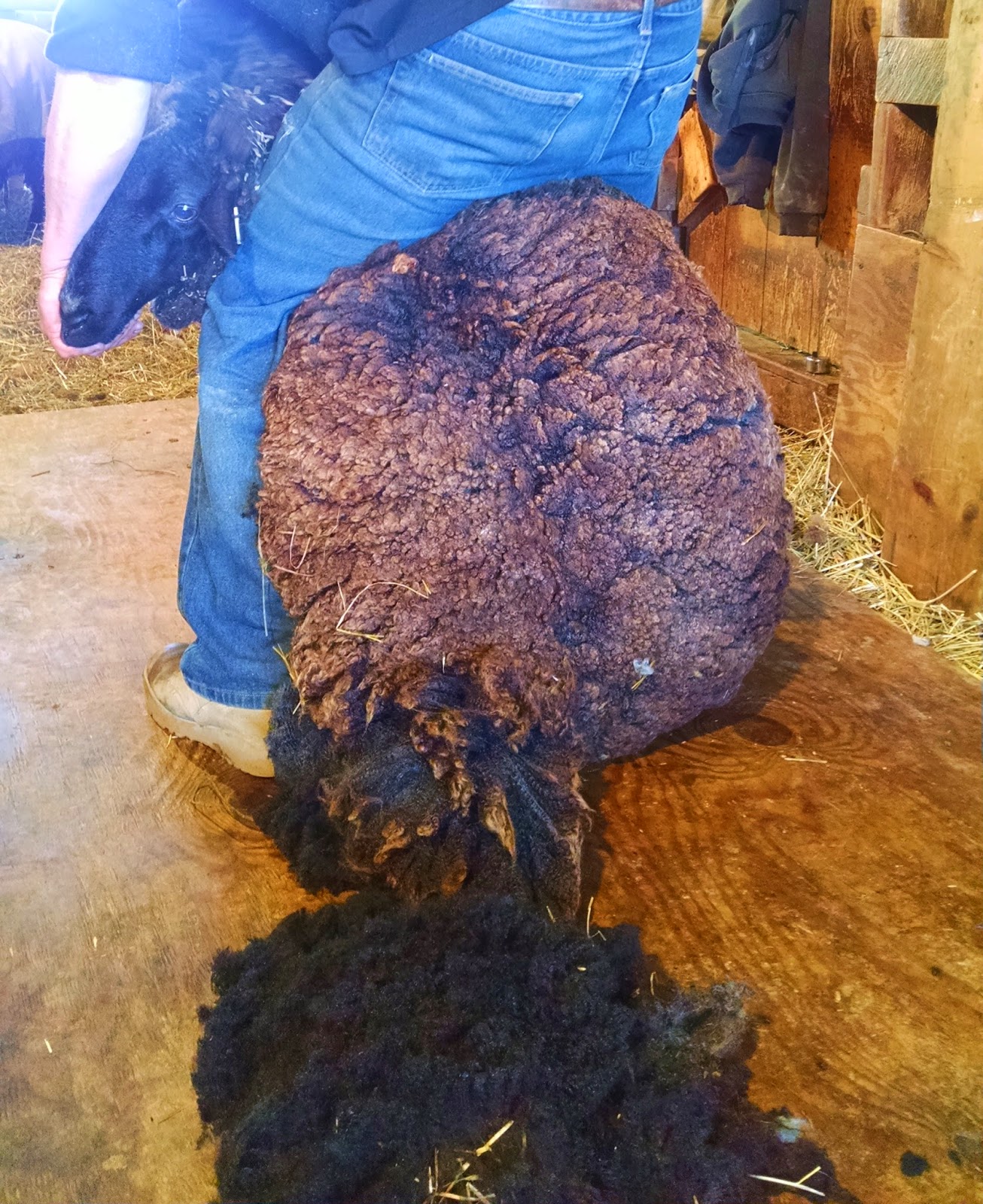 Taffy, a Border Leicester cross, with the belly wool already shorn away and set aside. 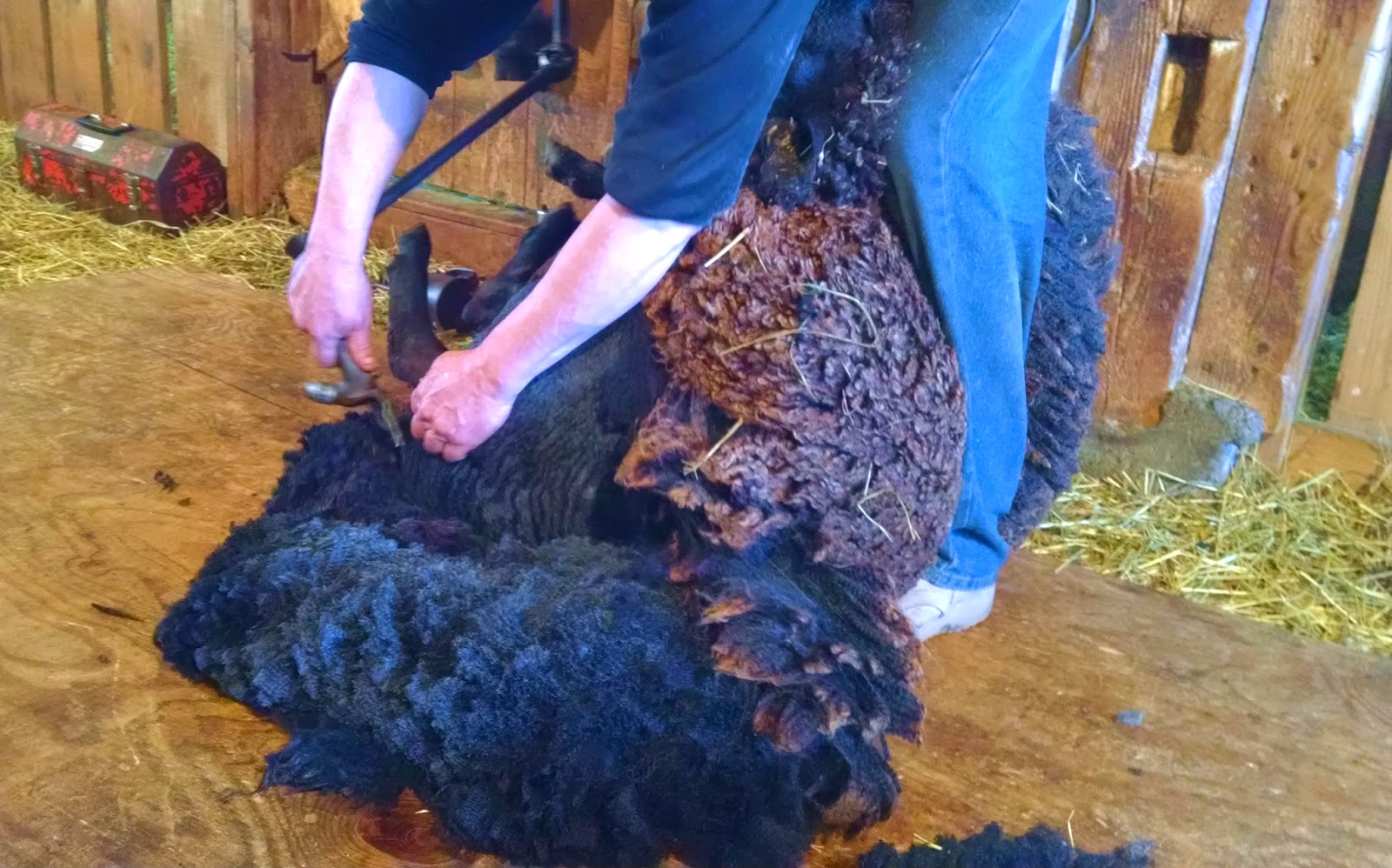 She has some gray fibers creeping into the black. 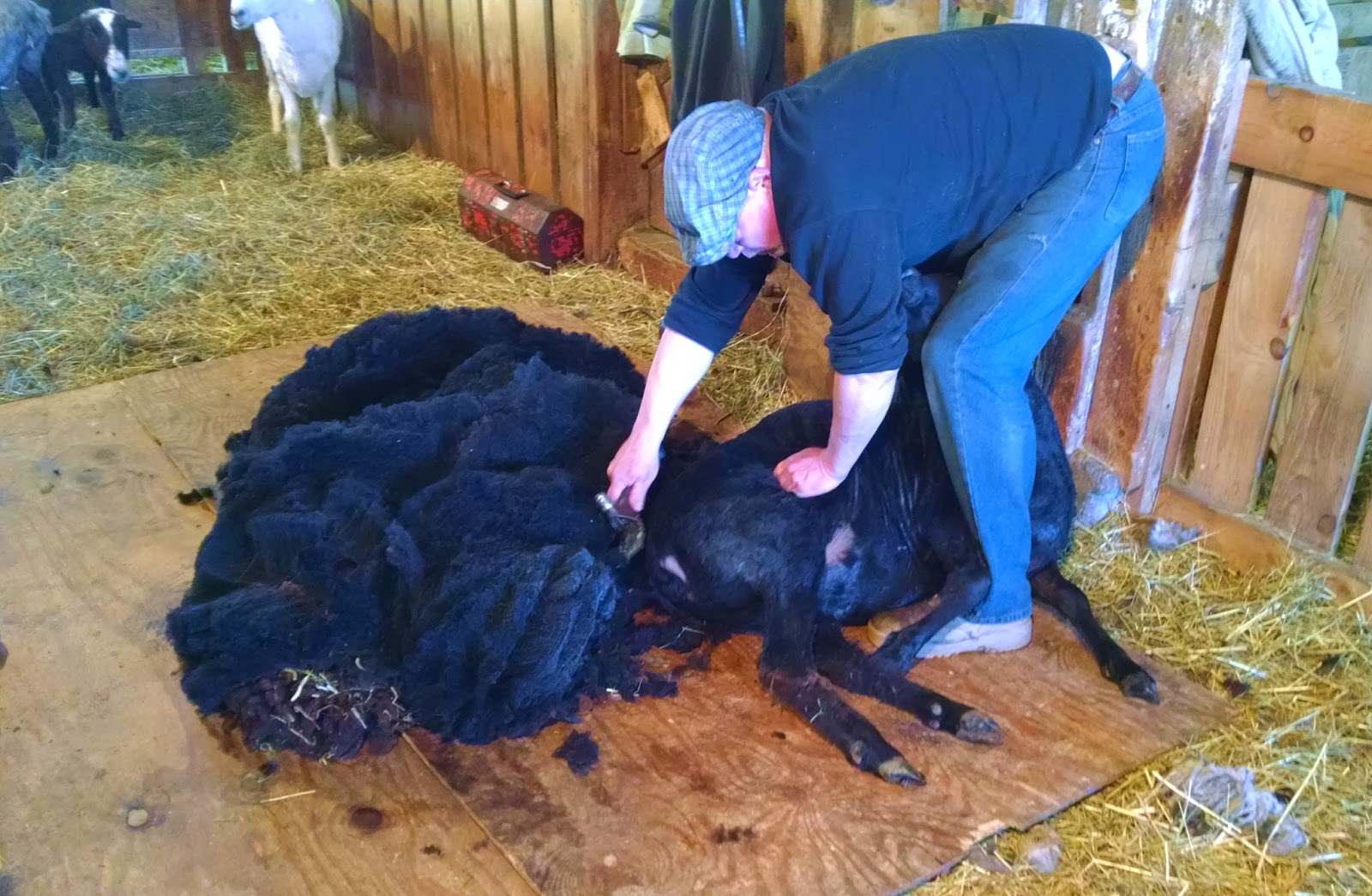 This is a really big lovely fleece and I have it earmarked to go to the FLFF fleece show and sale.

So now I have a good bit of work lined up....literally.  Thirty-eight fresh fleeces, many already reserved from the website for hand spinners and some destined for the fleece show and sale at the Maryland Sheep and Wool Festival in - gads - a hair over two weeks. 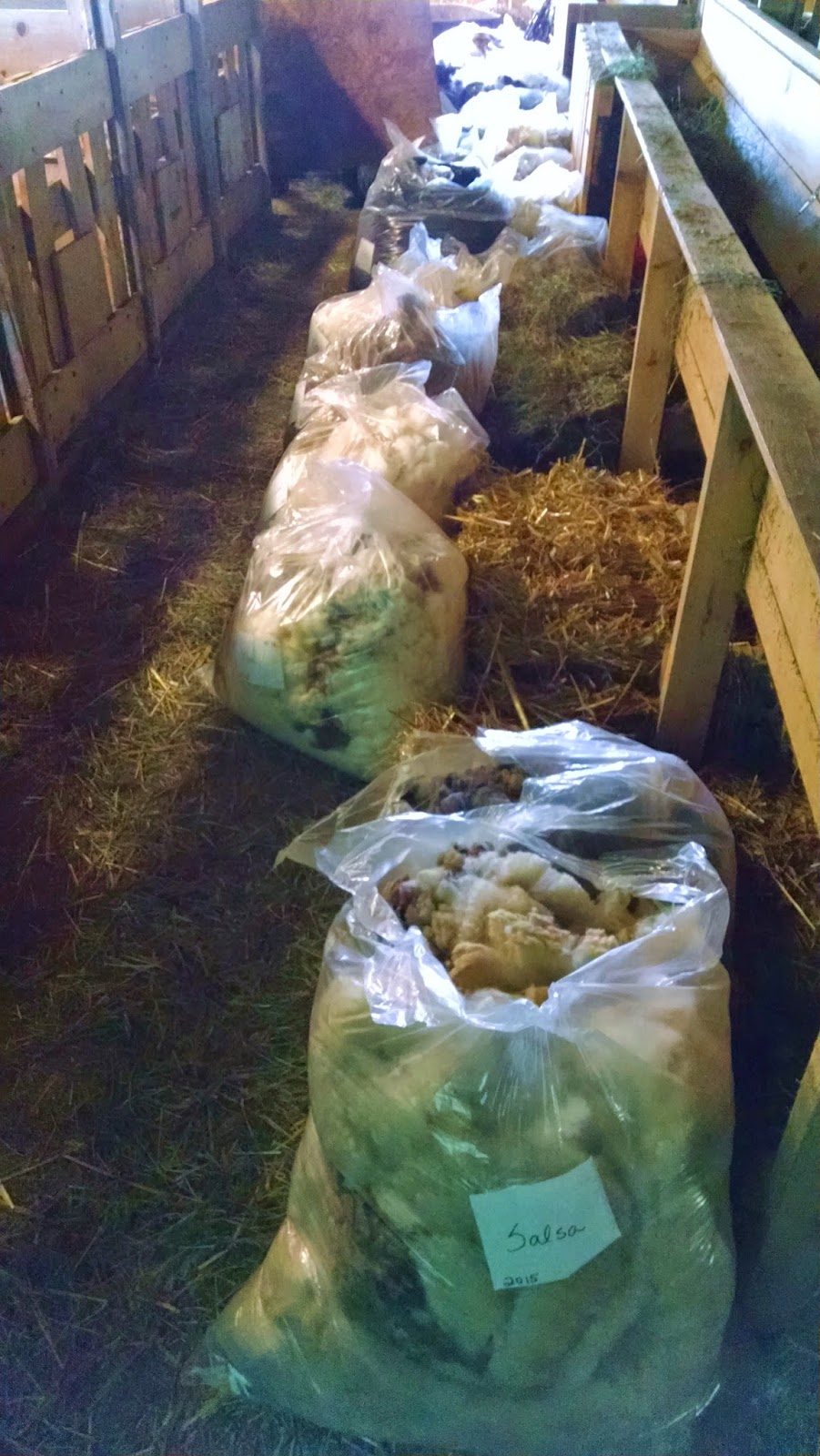 Tomorrow's job - assembling the multi-teat nurse bucket and getting the bottle lambs familiar with it.  Feeding time has turned into a crazed free-for-all with the greedy little thugs eager lambs literally leaping over each other, pawing and butting and trying to gnaw the plastic teat out of the other lambs' mouth.  There's no such thing as teaching them manners so we need to change the scenario to work better.

The little dickens grow up so fast!