Despite being underfoot one way or another every hour of the day the cats have gotten short shrift on the blog all summer with the exception of both Ivan's and Alexi's passing.  It's about time to rectify that with some kitty updates.

First, Kittin got clipped by a car in early August the day after Daffodil died.  A glancing blow left her laid out, unconscious, in the center of the road and relieved her of about seven of her lives.  Except for a broken tooth she miraculously had no outward injuries (or broken bones) but closed head trauma and severely bruised lungs kept her at the vet hospital for four days and  I've held her in the wool shop to recuperate ever since.   Her right side appears to have taken the force of the blow and she has loss of strength and coordination in the right front leg leaving her with a rocking, limping gait.  She can't flex the toes of that foot yet and perhaps never will.  I'm hesitant to let her out because she's so compromised and she actually doesn't try to dart out the door which surprises me but I'm sure she's realized how hampered she is.  She spends her days sleeping, eating, chasing flies if they land on the floor, washing her fur and thinking cat thoughts.  She's getting kind of fat.  She enjoys our company (me and Holly, that is) when I'm in the shop and lays under the skirting table with abandon, oblivious to the bits of cruddy fleece that drops down. 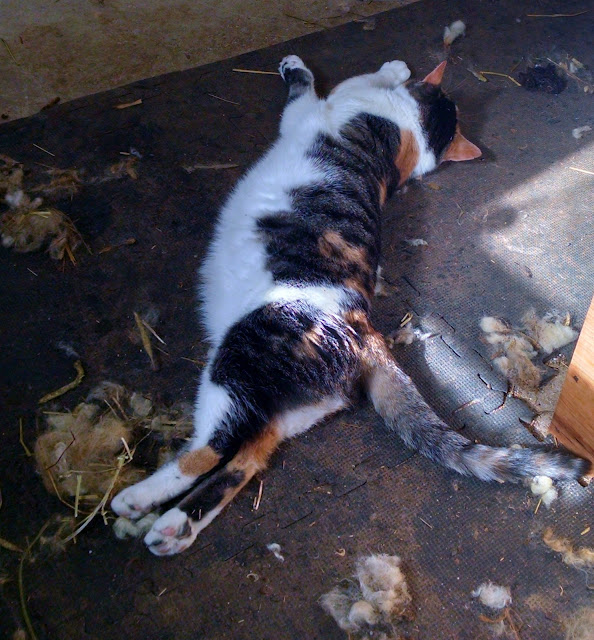 And when that gets boring she moves to the blanket I have for Holly to lay on. 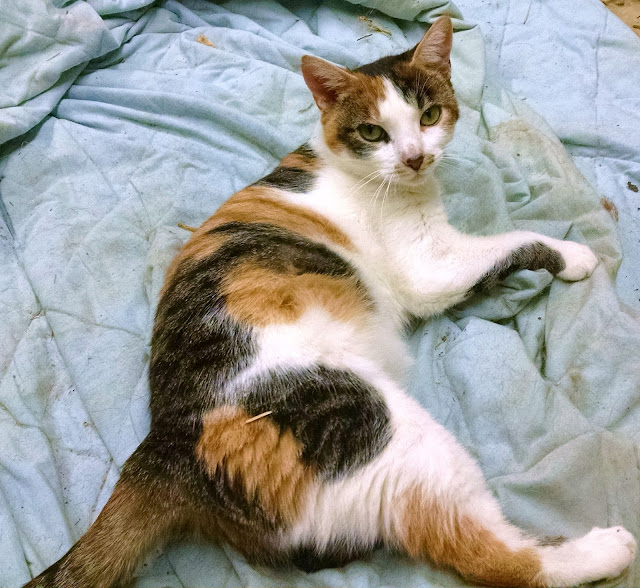 Natasha moved back to the barn after it warmed up in the spring and has been doing just fine down there although I haven't seen her do more than step out the back door to sit in the pasture on sunny days.  She does like her sun patches and now that it's getting a little colder she seeks them out as soon as morning sunbeams come in the east-facing door. 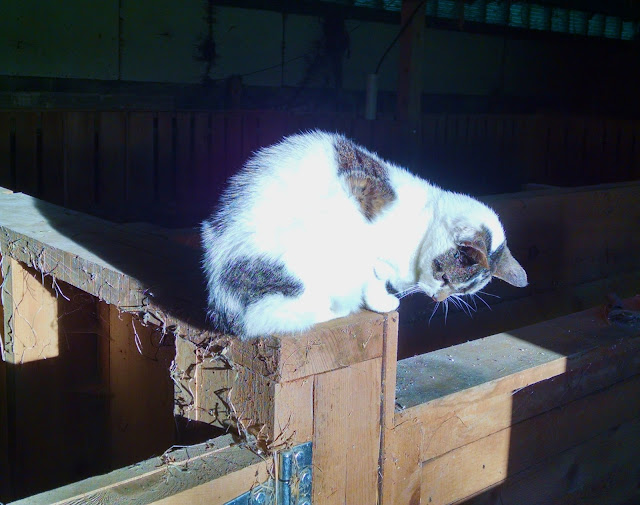 She's intimidated by Clem, but Chloe gives off different vibes and they seem congenial with each other. 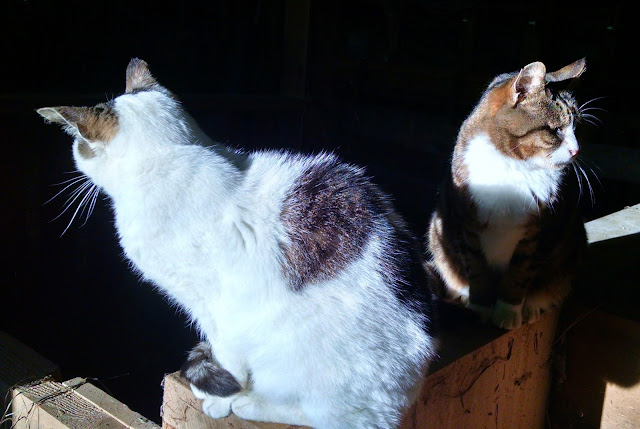 When it gets seriously cold I'll take her back to the wool shop too. 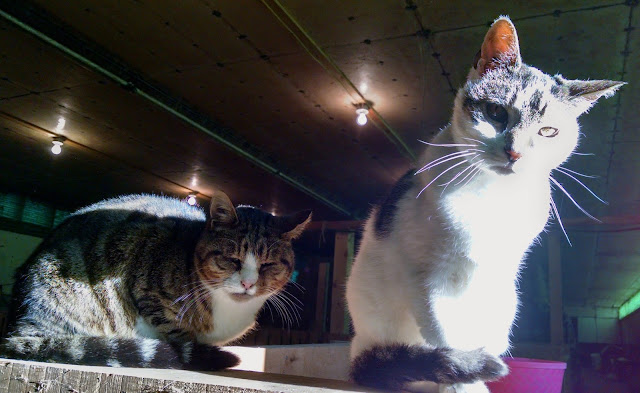 "Heck, take her now, would you?  She's hogging all the sun."

Chloe's brother Clem has become the defacto king of the barn.  He's quite a regal boy although he's more silly than serious. 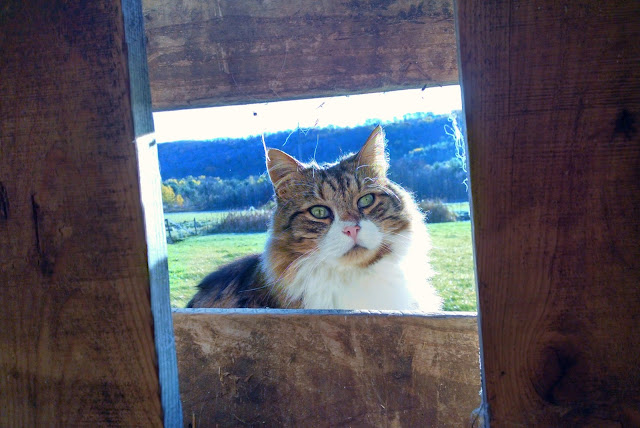 And boy, does he love him some sheeps!  (Includes scenes of intense cat sniffing!)


Popeye is growing like a weed. His bum eye doesn't give him any problem but he seems blind on that side for sure.  At least it doesn't look gross, just like a gray marble. 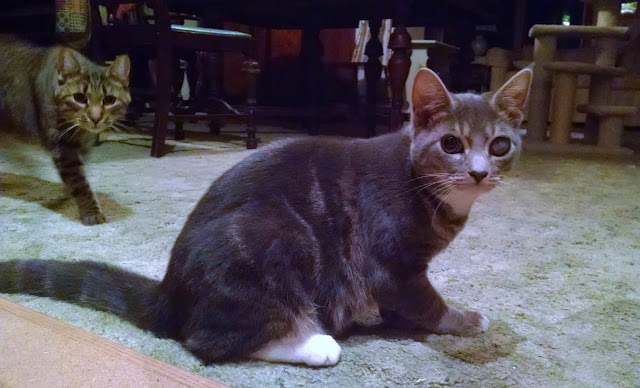 Pretty soon I'll make the appointment to get him neutered.  "Unpack his bags so he won't go travelling" as they used to say but since he's going to be an indoor cat it's a moot point. Calvin is his best play buddy, but surprisingly Dexter is the one he sleeps with!  Dexter and Calvin don't like to sleep together, but the little furball has worn him down won Dexter over in this regard. 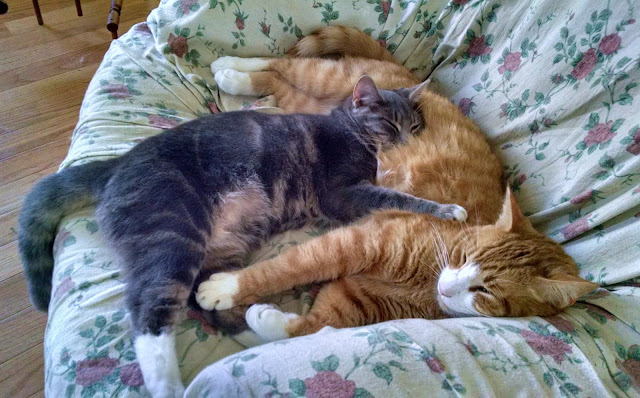 But Calvin is a good 'buddy cat', always interested in helping even if it just means sitting on the other office chair keeping me company while I do computer stuff. 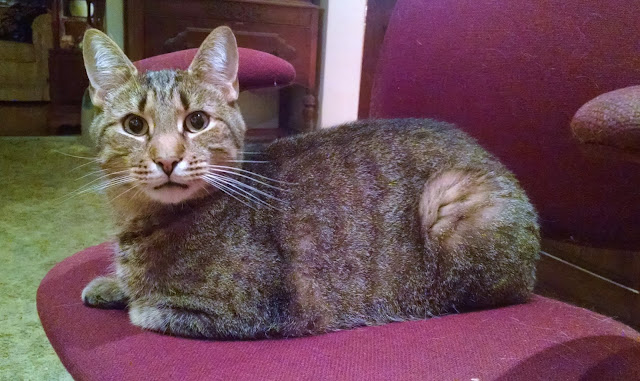 "Really?  The intertubes are full of cats?  Amazing!  Tell me more."