Yarn Along - A Finished Object!

Last weekend I went stash diving and started dating some lovely dyed roving of unknown fiber. At the rate I spin we'll be going steady for some time.  It was from the Christmas Exchange at our spinning guild last December and all I remember is that it's wool and I'm going to guess it's Blue Faced Leicester or a similar flavor.  It's not merino or a blend of materials, but I really don't know the pedigree.

There were two braids in the gift bag.  This is from the brighter, more shades-of-blue braid.  The other is a bit darker blue with more purple and smokey gray tones.  I'm sure it will be fun to spin too......someday. 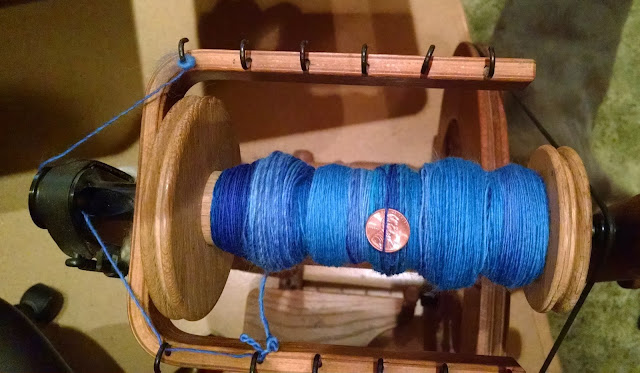 The more notable accomplishment - for me - is a fully finished object!  Here is my version of Leftie which incorporates some of the special colorways dyed by Amy the Fiber Goddess of Stone Edge Fibers in honor of the guild's 30th anniversary.  Last year our handspun mini skeins were displayed during the Finger Lakes Fiber Festival.  This year the task challenge was to use those skeins in an item of some kind.  I thought Leftie would show the colors nicely.  The white(ish) main color starts out as handspun Cotswold/silk at the small end and I quickly (but not quick enough!!) realized there wouldn't be enough of it and I started adding in rows of our millspun white Cotswold till it morphs over to all millspun at the wide end. 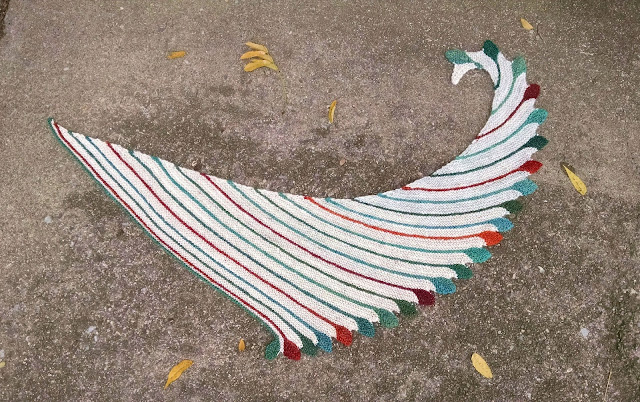 The leaves were fun to make and like potato chips I found myself wanting to make just. one. more.

While working in the wool shop I've recently listened to Anne of Green Gables (would you believe I had somehow never found it as a kid?  Probably because it didn't have a horse on the cover.) and was then stymied because the library doesn't have any of the other books in that series on audio!  Drat, that's the third time that's happened lately.  So, thwarted in finding out how things go for Anne I browsed the library and wheeled around in a literary 180 degree turn to listen to The Bone Garden.  A good story with interesting parallel mysteries set centuries apart but with the same truth being discovered at the end of both timelines.

Email ThisBlogThis!Share to TwitterShare to FacebookShare to Pinterest
Labels: knitting, spinning, yarn along