Sunday started drier and with sun for about an hour which was perfect for sitting on a bench outside the barn, drinking coffee and eating a giant cherry strudel.  Pure bliss.  How happy are you at Maryland?  It rivals Disney World for sheep and fiber people.  Charlene Carlisle of Little Hooves Romneys was already cheerful and would later be even happier when her lovely sheep won high honors in the Romney show. 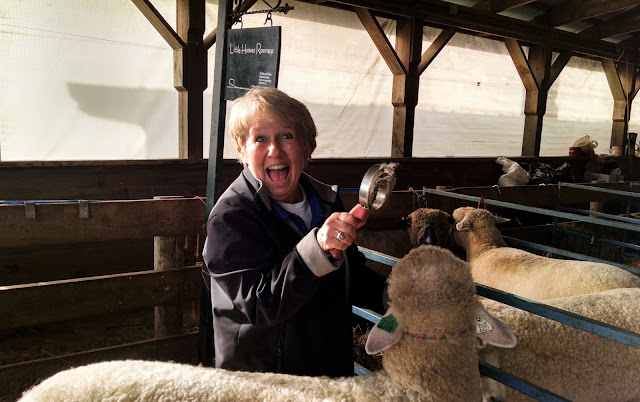 By noon the day had brightened and the grounds were filling up with a lot of the people who hadn't ventured out on colder, wetter Saturday. 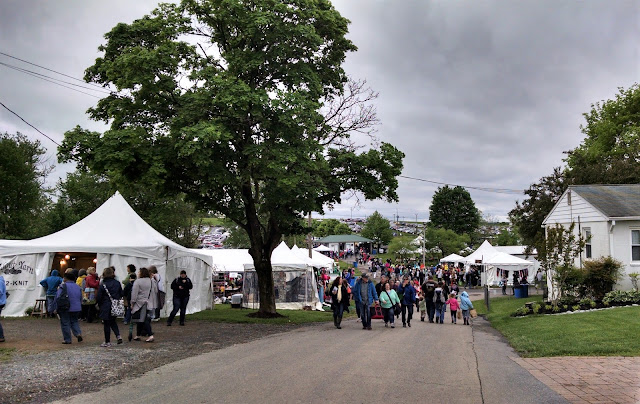 I saw this license plate in the parking lot.  I bet the driver's first passion isn't fiber - I bet someone was being a good sport for their significant other that day. 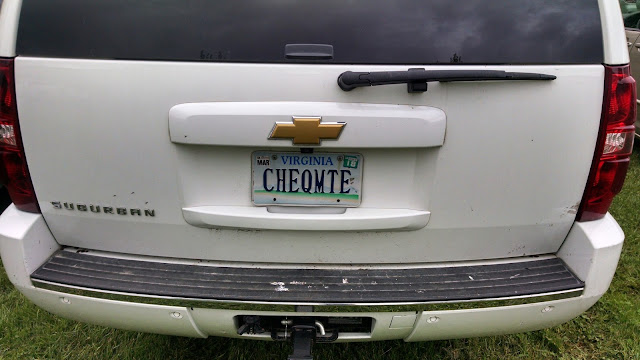 The sheep shows run all day on both days in adjacent rings.  Scheduling conflicts can happen but are handled with aplomb.  When you have two breeds and they are showing in different rings at the same time you wave your friends down out of the stands and everyone pitches in.  Young exhibitors can be kept running all day if they are helping friends as well as showing their own animals and it's a great way for them to get more and more experience with sheep.  This class is White Long Wool rams and I'm not sure if the folks in white coats are from the UK or just wish they were.  ;-)

It was a big class with several breeds of sheep represented.  It's a good judge who can fairly compare Scottish Blackface to Cotswold to Leicester Longwool but once again the festival committee came up with two excellent people who really knew their stuff.  You can learn so much by listening to them give their reasons each time for placing the classes the way they did. 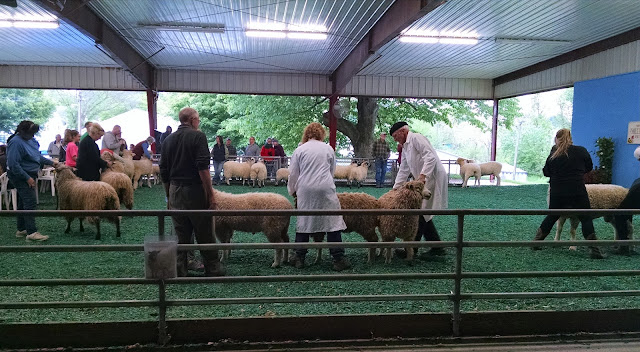 One of the inspiring events at the Maryland Sheep and Wool Festival is the Youth Conservationist Program.  The Youth Conservationist Program (YCP) is an adult/youth mentoring program that enables young aspiring shepherds to experience the joys and responsibilities of raising and conserving heritage breeds of wool sheep that may not be common in their area of the United States. Breeders who are willing to mentor youth donate a yearling ewe and help the recipient establish their own flock. Recipients are expected to fulfill the requirements of the YCP by promoting/showing their particular breed of sheep, breeding to a registered ram and by producing a woolen item using the fleece from their own animal. Donors award the ewes to their chosen recipients at the YCP Ceremony held annually at the festival. In 2016, 15 registered ewes were awarded to 15 young shepherds. A number of past recipients have also become donors and are reinvested in the same YCP program that helped them succeed.

Some of the breeds awarded were Scottish Blackface, Jacob, Leicester Longwool and Finn.  The recipient of the Finn also was awarded her two tiny lambs!  Quite the scene stealer! 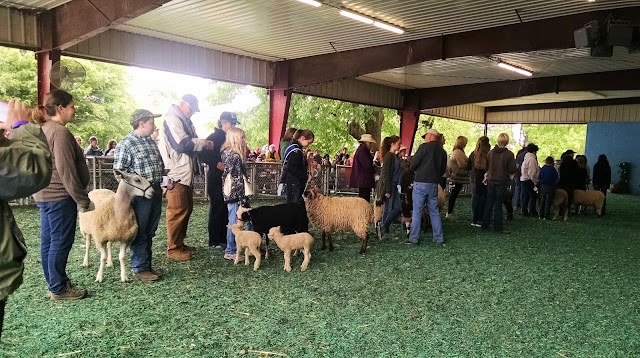 The festival also hosts a large 'breeds display' barn where associations can showcase what their breed is noted for.  It's a great place to do research if you're choosing a sheep breed, weighing the merits of one over another or trying to locate producers of the breed you've decided on.  Most displays are manned by members who can answer questions but if someone has to step away the pens still have representative animals and literature and attractive displays.

This colored Leicester Longwool momma had a pair of twins with her and they were quite the cuties, peeking over the hay feeder as they were. 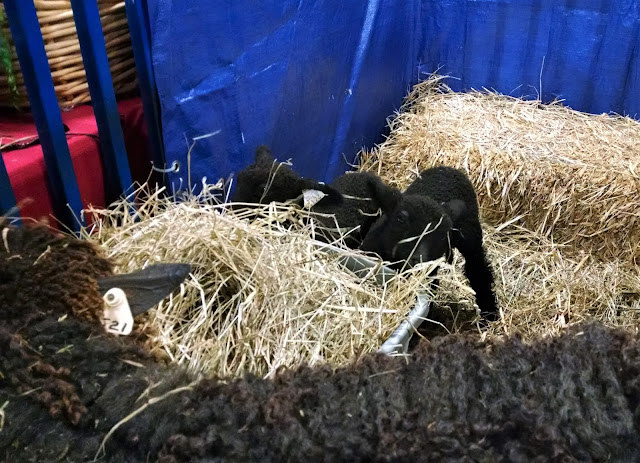 The Border Leicester folks had a showstopper of a display.  I'm always blown away by the creativity of all types at this event.  Raw wool at the base, roving up to the torso, knitted sweater with a sash of yarn skeins and this eye popping capelet.  I admit I almost didn't see the sheep. 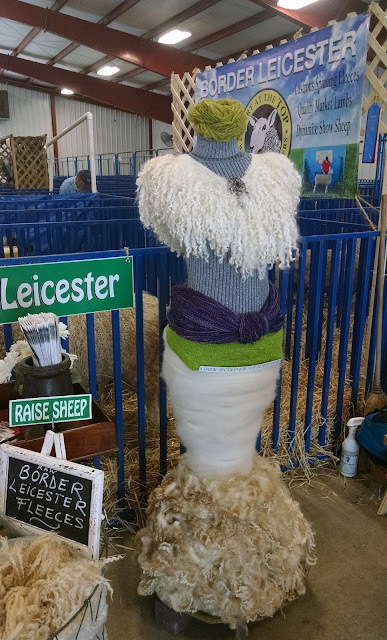 Sunday was also a good day for shopping (cough*again*cough) and admiring what vendors had to offer.  The felting supply booths are always chock full of masterful examples of what one can create. 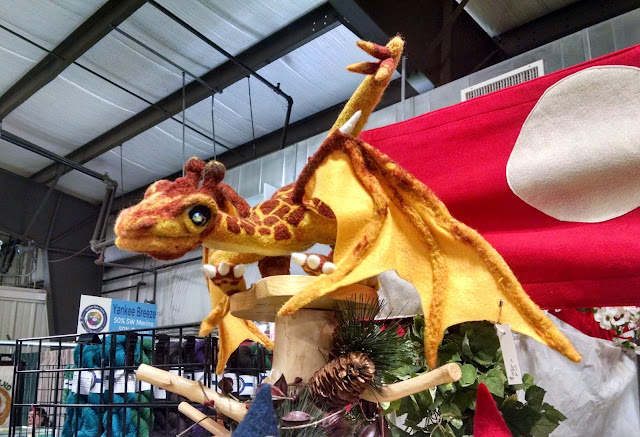 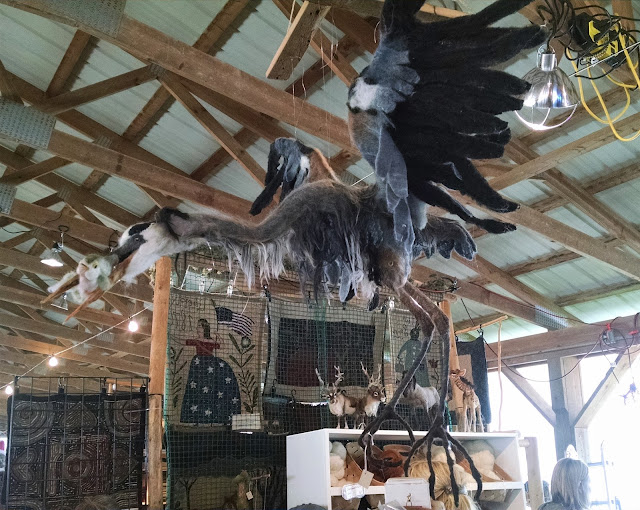 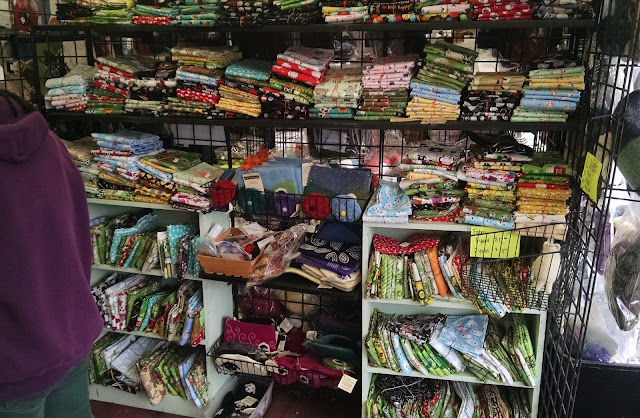 Sunday is a little bit slower than Saturday and by late afternoon a few vendors had a minute to sit and spin or knit.  I regret not asking about the origin of this wheel. 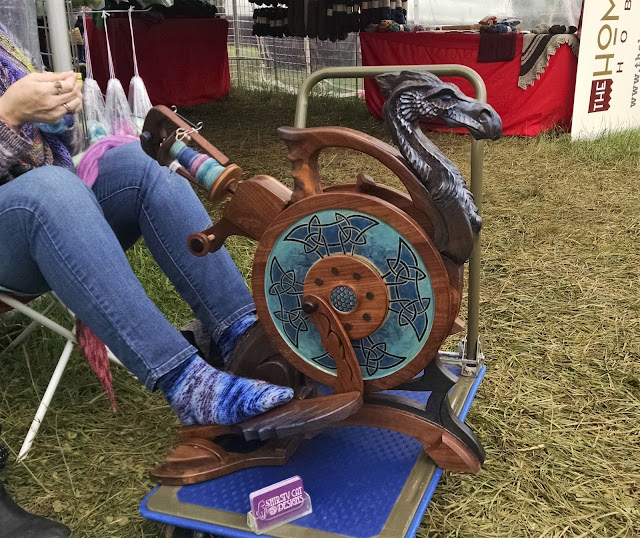 I went back to check the Fleece Sale. 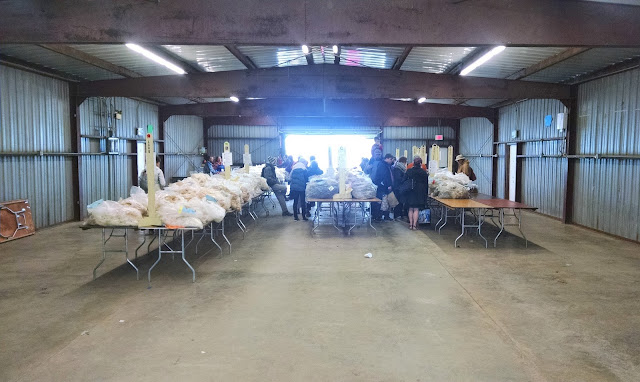 Wow!  So few fleeces left, and yet those that were there were still of useful quality so late buyers were still shopping and buying.  I was happy to see that all seven of mine had sold.

After all the regular sheep shows had concluded - the breed shows and the Fine, Medium and Long classes in both white and colored divisions - the 'champion drives' are held.  This is where the champion ewes and rams of each show are judged against one another for Supreme Champion Ram (and Ewe) of the show.  The two judges work together to decide the final winner.  It must be very hard - is that Jacob ram a more perfect example of his breed or is that Romney closer to the breed's standard?  Does that Border Leicester epitomize what a ram of his breed should be more than the Natural Colored Fine Wool ram does?  They are all champions in their own right so lengthy deliberation isn't unusual.

Rams are judged first.  Here one of the two judges is looking at the fleece of one of the 'short list' animals - several that were pulled from the whole field of champions and the group from which the final winner will be selected.

And then the process is repeated for the champion ewes.

And finally they choose the Supreme Champion Fleece animal.  (On the hoof - this is not part of the fleece show and sale where the wool is already off the sheep.)  In this class you don't have to be a champion.  Each producer is allowed one animal they consider their best fleeced individual and the judges then choose from the group using the same criteria that a fleece judge would consider - breed standards, volume of wool on the animal and desireability.  Sometimes it comes down to which fleece makes your jaw drop when you part it.  At this level they are all nearly perfect.

And before you know it the crowds are drifting toward the exits and the vendors are starting to pack up their wares although last minute shoppers are never turned away. 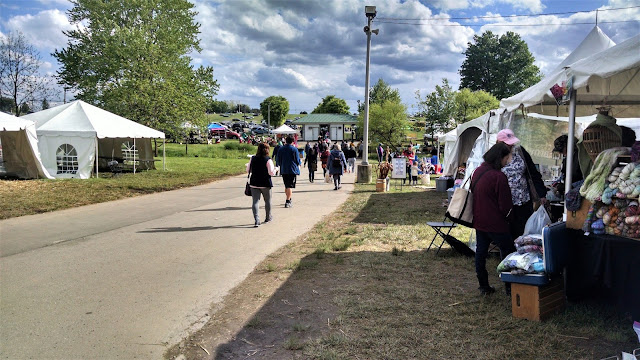 Vendors and sheep breeders still have hours of work to tear down and pack up their booths and animal pens and get home or at least as far as tired eyes will take them down the highway to a hotel. What a weekend. 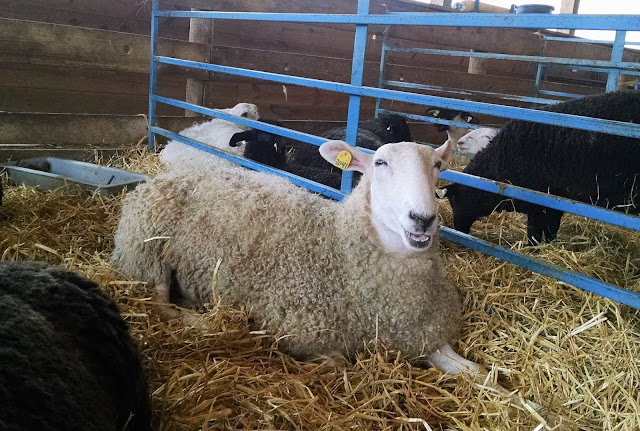 "See you next year!"