December: The Month of More, Part 1

Somehow December's thirty-one days have more of everything packed into them than any other month.  More fun get-togethers, more food, more meetings, more deadlines, hopefully more fun and not more stress.

We made sauerkraut again this year.  Fifty pounds of clean, trimmed cabbage was shredded on our old three blade kraut cutter and blended with one pound of non-iodized white salt.  Andy just went by what his mother always did and it was nice to see that the recipe in the Ball Blue Book, (edition 32) agrees with us.  If you need a canning guide the newest edition is here. The heads were large and tight and six made an adequate amount although we could have squeaked in a seventh.  Given that cabbage was twenty-nine cents a pound at the farm stand, sauerkraut is one of the least expensive canned goods to make. 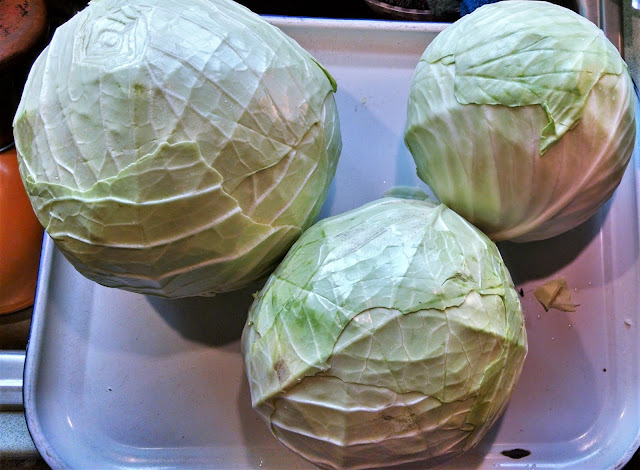 The heads were cut into wedges that would fit into the cutter box and the tedious task of running the box back and forth over the blades fell to Andy.  I suppose they make some kind of tool nowadays to hold the cabbage down but we're used to doing it by hand and just being careful when the cabbage is almost all cut through. 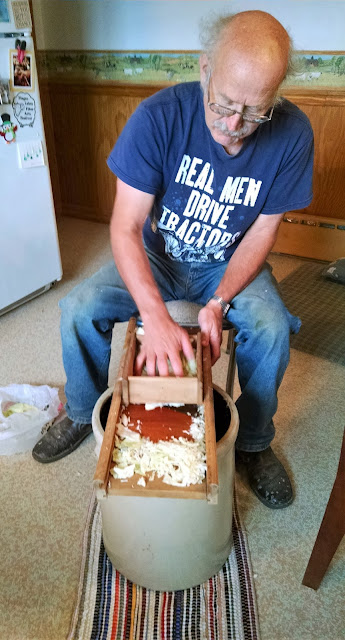 Salt is added and stirred into the chopped cabbage until all is mixed well in the crock.  This is an eight gallon crock and we could have gotten another cabbage in there but it's hard to tell at the beginning. 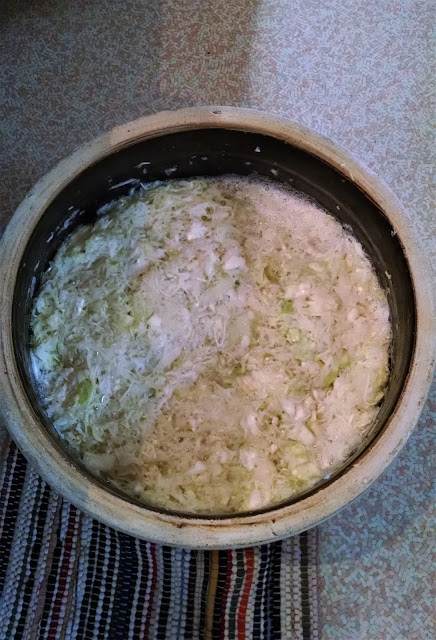 The salt draws the juice from the cabbage and by the time you're done you can press your hand into the middle and liquid will well up around it.  Sauerkraut is just fermented cabbage and fermentation is an anaerobic process.  Air equals spoilage.  To minimize the loss we put a big dinner plate on top and weight it down with a bag filled with water.  This seals the edges nicely and holds all the cabbage down under the juice.  You can just see a little liquid squishing up around the bag. 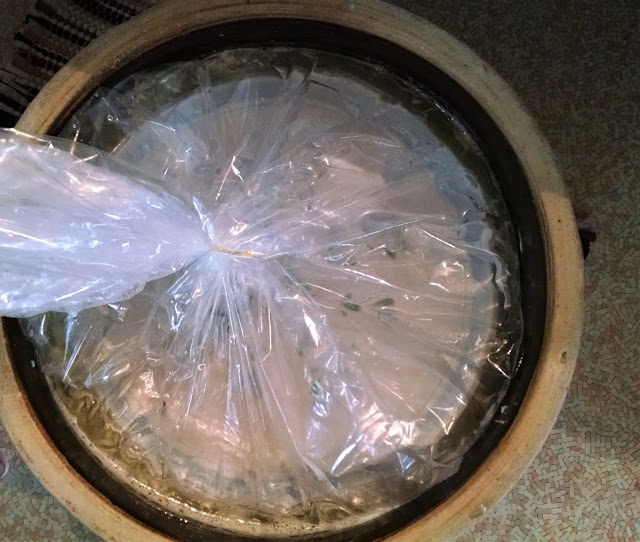 We put a towel over the top and tied it tight with a string.  This keeps out both fruit flies and cats.  (Ha ha, just kidding...... sort of.)  And five weeks later we have sauerkraut!  We've already used a couple of quarts but this should last us most of the year. 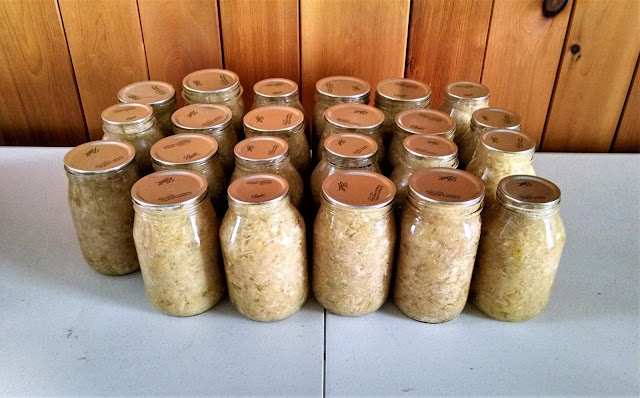 Mackerel skies brought an end to the streak of warm sunny weather we had been enjoying and turned it more chilly and somber as befits December. 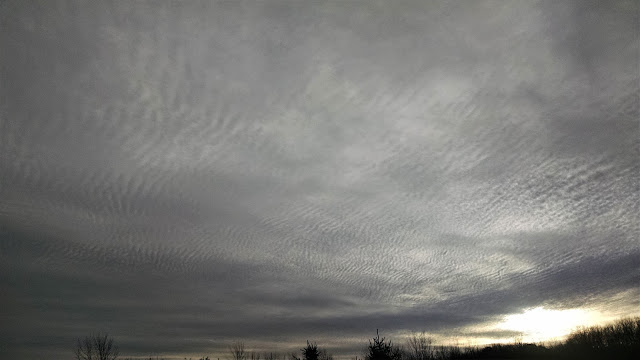 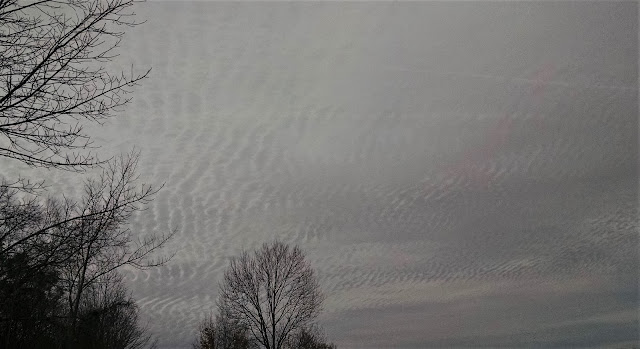 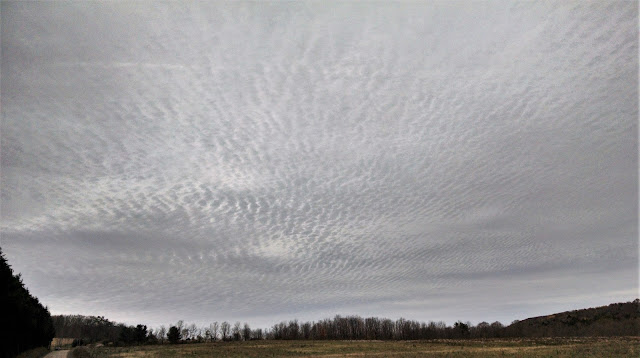 We were able to keep letting the rams out to pasture daily and the supply of apples, and thus apple parties, lasted until just a few days ago. 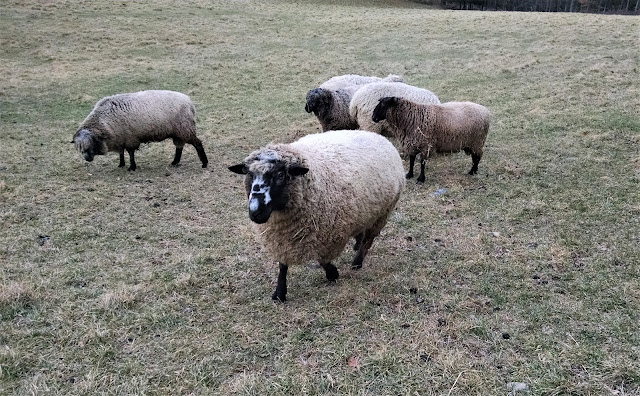 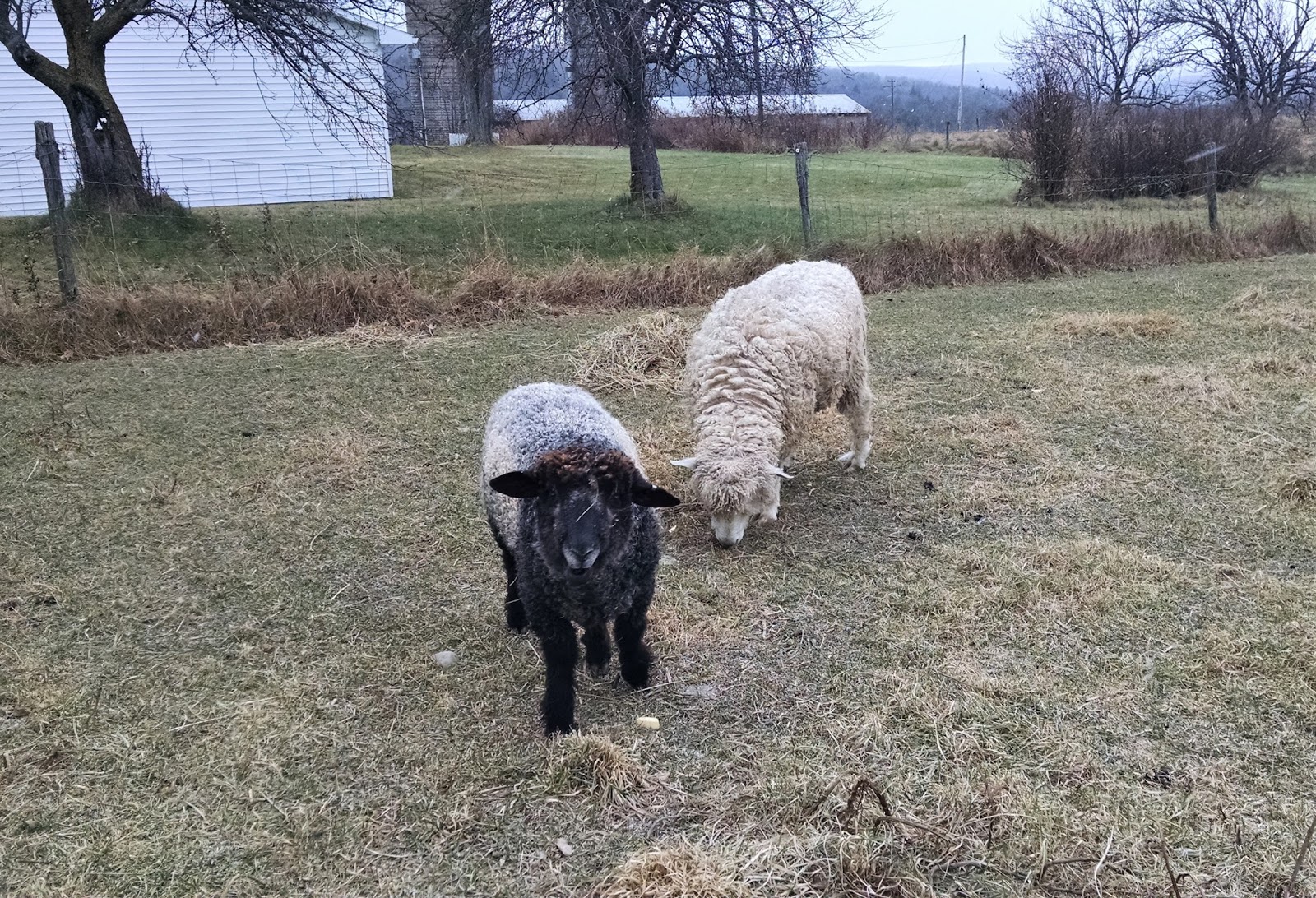 The curls are showing up well across his back now, do the snow pellets that were falling. 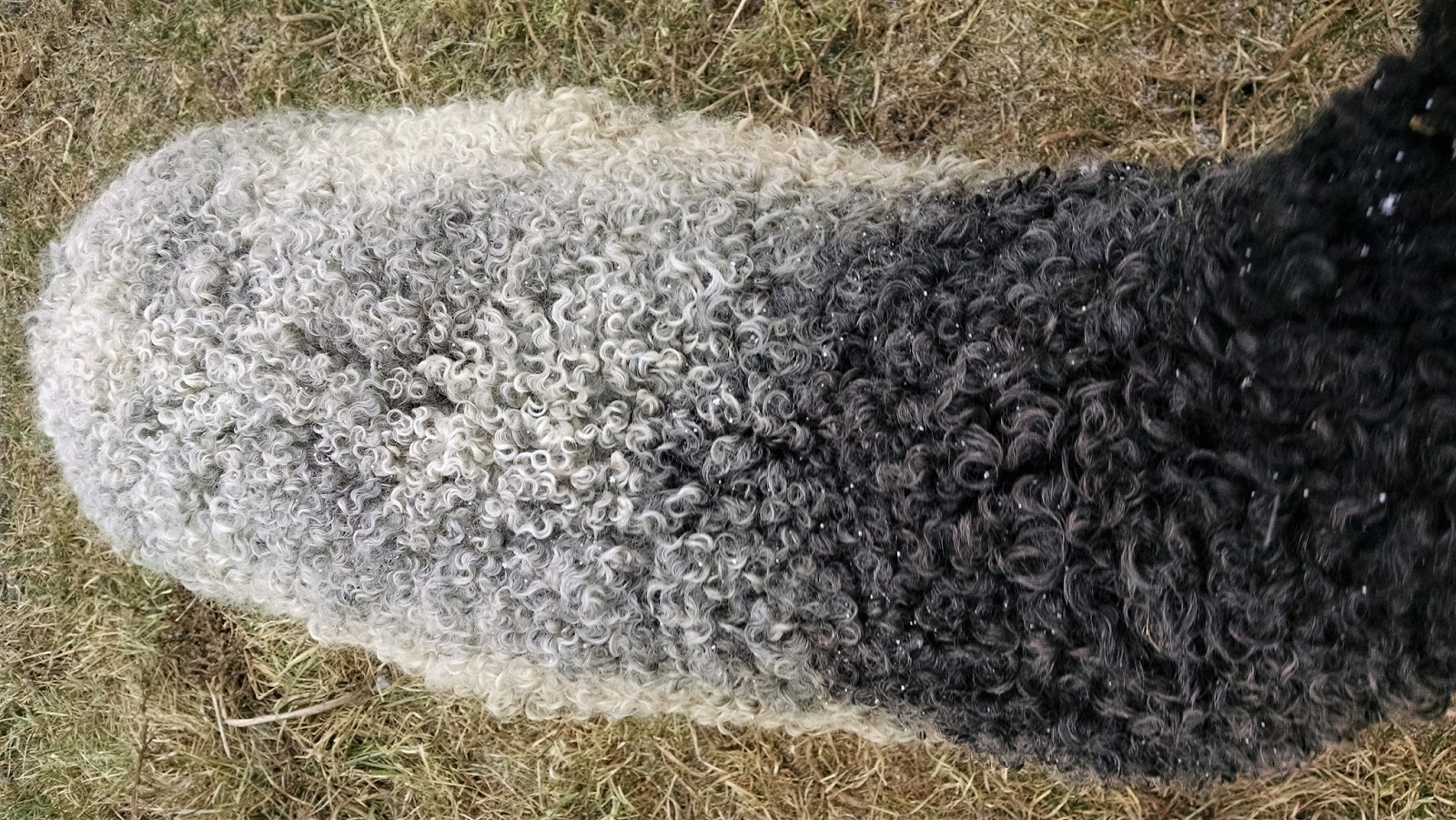 The ewes are completely off pasture now and have to wait outside in the yard while we clean the mangers and set out fresh hay.

Tahiti always looks so hopeful to me.  Some sheep just have an expression that's all theirs. 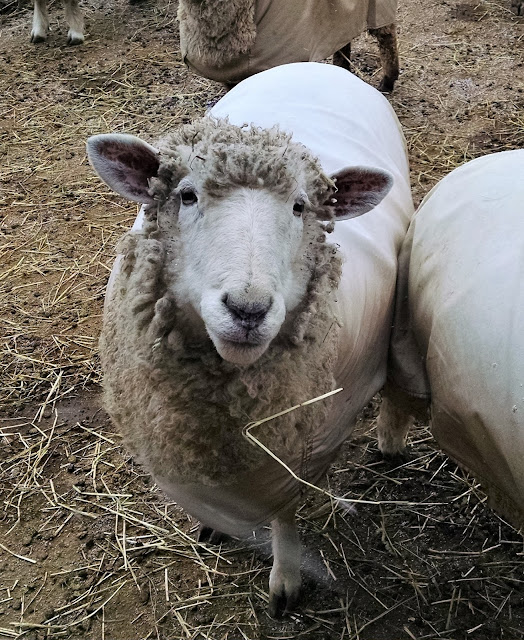 Andy has been putting firewood in the cellar and got into the big 'buzz pile' - firewood about as thick as your arm that needs to be made into shorter pieces on the buzz saw.  He found some interesting insects who had worked their way into the pile to escape the weather.

A butterfly!  I tried to look it up online but didn't get very far having only the underside of the wings to go on.  I didn't want to force him/her to flutter around since it was clearly trying to avoid the weather so I settled for relocating him to a big void in one of the apple trees and hoped for the best. 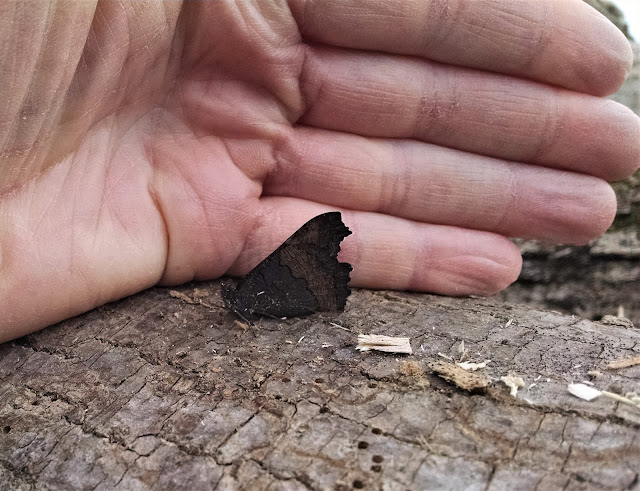 There was also a cluster of three pretty moths and while they were also seeking shelter in the wood pile they were more active when exposed and I only got a picture of this one.  Couldn't ID him, either. 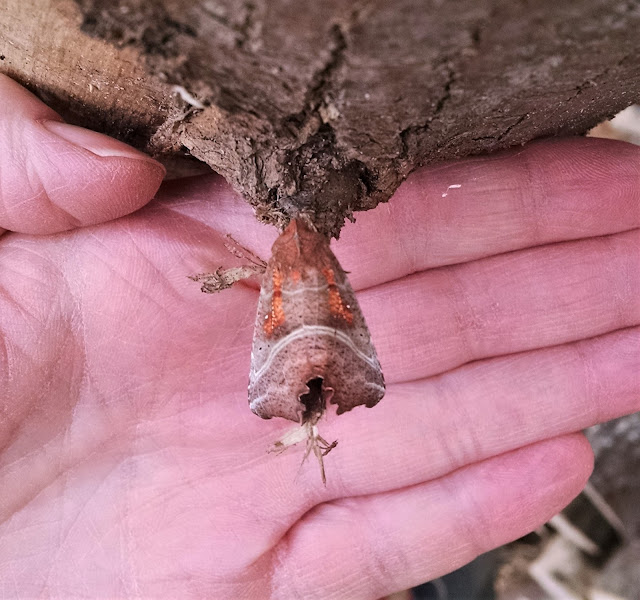 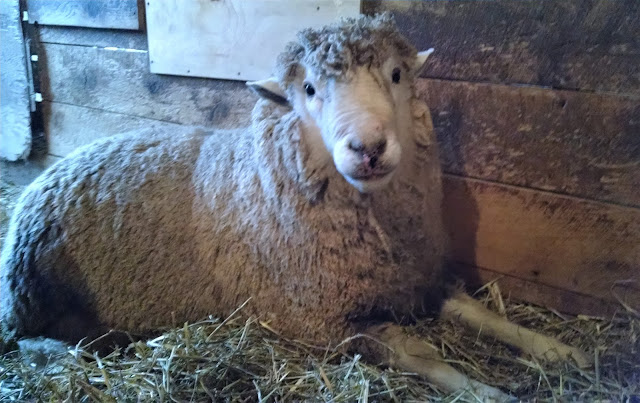 "I'm just gonna put my feet up while you figure out da bugs.  Crazy lady."