A Blizzard On Number Seven

Today is Knee Deep in Sheep's blogiversary - number seven to be precise. Wow, how did seven years slide by already?  It sounds like a big chunk of time but it doesn't feel that way.  That happens with a lot of numbers we talk about lately... years out of college, years we've had a vehicle, years since someone passed away.....eeesh. 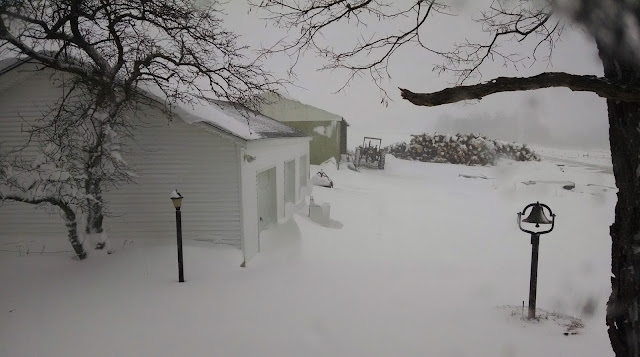 Our power went out around 4:00 AM and Andy crawled out of bed to go fire up the generator.  Because it's wired to a load center pole instead of a house it doesn't have an auto on/off function.  The generator would run for 17 hours today while NYSEG dealt with the outages across the region. We couldn't be without it.

It was hard to tell how much snow we received since the wind blew it into crazy drifts with other areas scoured bare.  We're guessing over a foot - maybe fifteen inches?  We had waist-high drifts around the house which meant wading to get to the bird feeders. 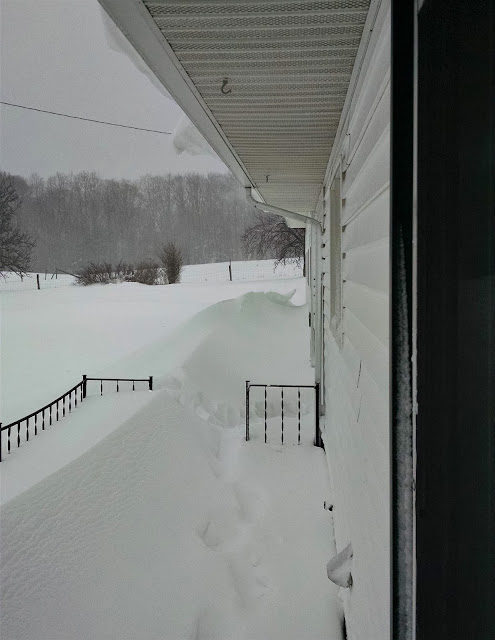 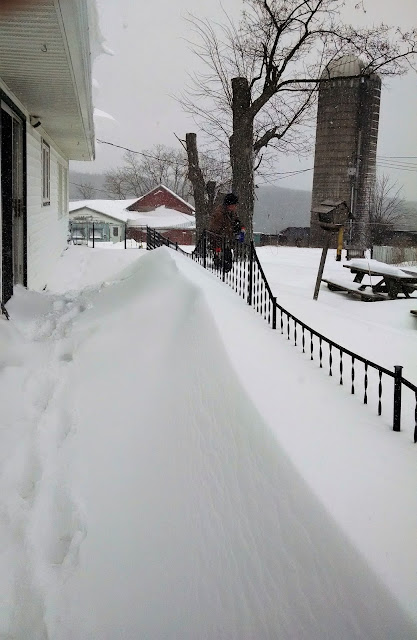 By the ram barn there were big drifts and other areas where the wind had shifted and was chewing into the snow and taking it away again. 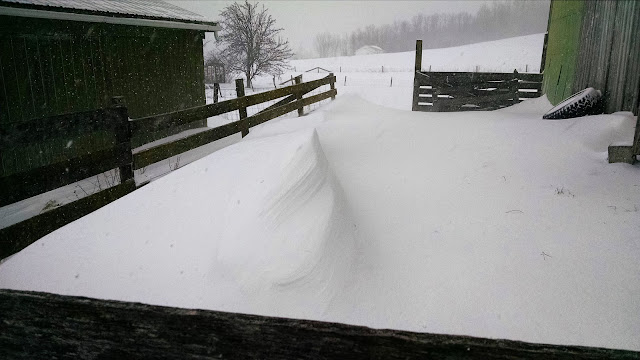 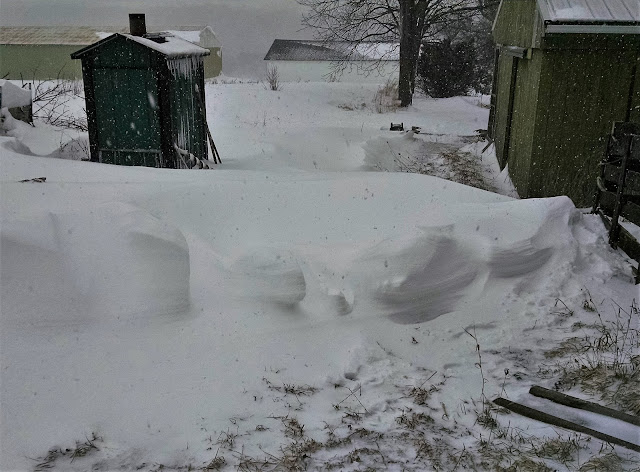 We had pulled the doors to the ram barn closed as much as possible but it IS a barn and the doors aren't tight.  One gap about six inches wide let the wind push the snow in all night long.  It looks like a huge mess but it's probably only half a bucket's worth of water when you think about it. 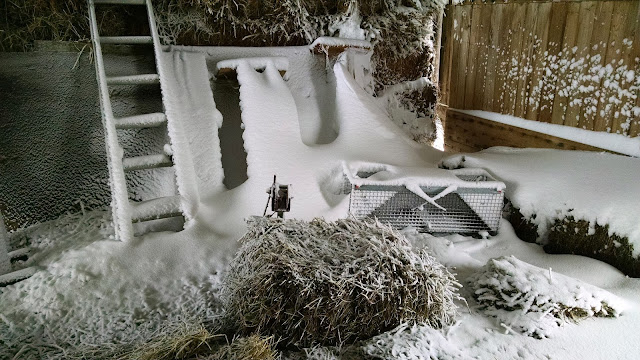 The bigger snow challenge was at the lower barn.  It hasn't happened in several years but Andy had to shovel to get the sheep OUT.  It was cozy as could be inside and the sheep hadn't stuck a hoof out all night. 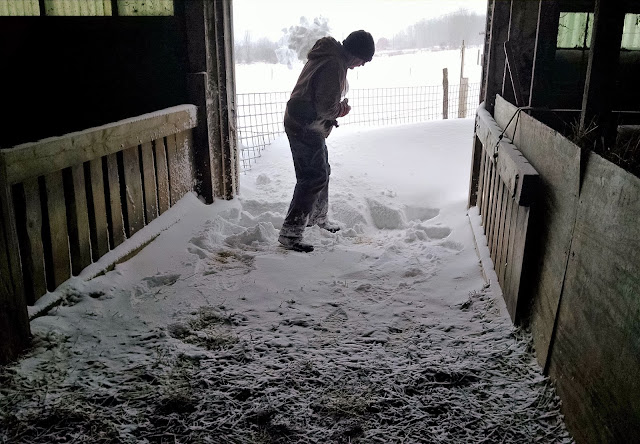 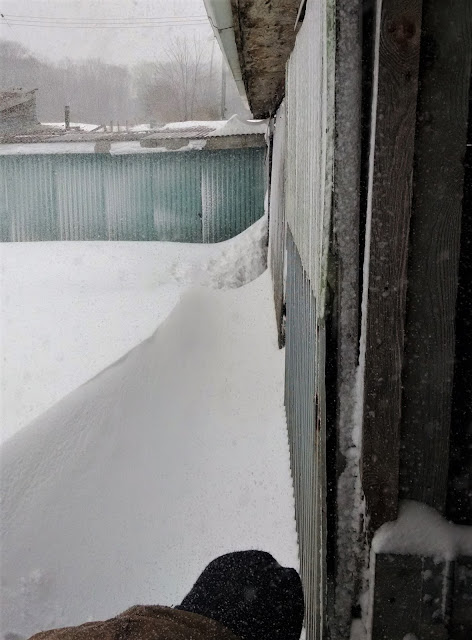 He had to work his way all along that side of the barn to the other big sliding door and make two lanes out to the feed  bunk. 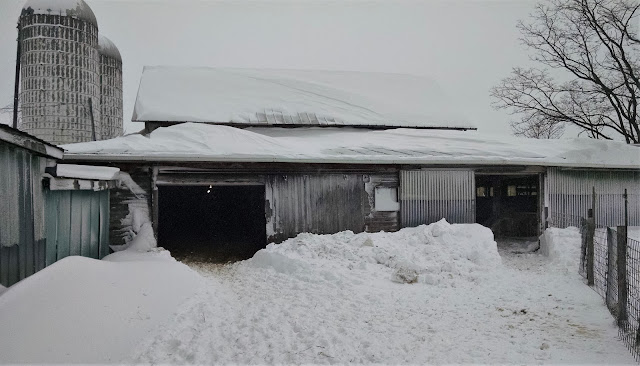 After that workout we could actually do chores - refill mangers in the barn and then take some hay to the 'picnic area' in the feed bunk. 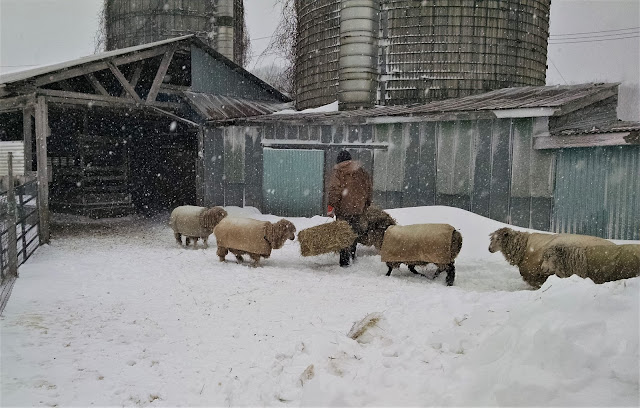 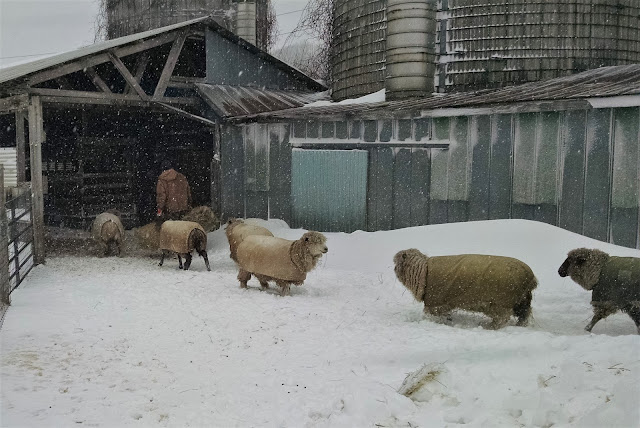 The sheep were totally unconcerned by the storm and the snow although they didn't like trudging through anything over their knees. 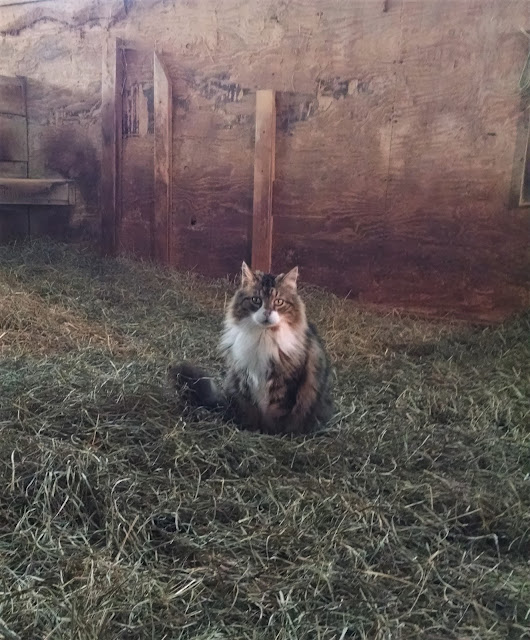 "I hates snow.  I is pretending to be an indoor kitty - indoors of the barn, that is."
Posted by Sheepmom at 6:52 PM