We Don't Really Plan to Collect Antiques on Purpose......

.......it's just that with our size of farm and bank account the older equipment is usually what we can afford.

Among other things, we raise oats.  Andy started doing that shortly after the dairy cattle were sold in 2000.  We feed some of the grain to the sheep, sell some and use the straw as bedding in the barn.  We generally plant somewhere between 12 and 18 acres, depending on what field is being rotated into or out of something.  Since we did not have a combine we always had to find someone to come and harvest the grain for us.  Those folks that had such machinery were either farming on a large scale themselves or had old (read:  really, really worn) equipment.  Each year we'd hold our breath as the oats got close to being ready.  Would the big guy be able to get away from his 500 acres to do our 15 before that hurricane comes up here to die?  Is the other guy's old equipment still running or did it break this week and we have to wait while he tries to fix it?  Will it drop half the oats in the field like last year or dump huge amounts of ragweed seed into the bin like the year before?  Every year has been an adventure in acid reflux while waiting to see how things would shake out.

Last year was the kicker - the oats were ready, the fellow with old equipment had been notified the week prior that they would be ready to harvest, and by mid-week (with hurricane remnants predicted for the weekend) when he hadn't gotten in touch, we called him only to be told that he couldn't to it today because he really wanted to go to Empire Farm Days. (Picture facepalm and cursing)  It all worked out - the oats got combined and the straw baled literally hours before the start of a week-long rain event - but we decided we weren't going to go another year having to depend on someone else's schedule. 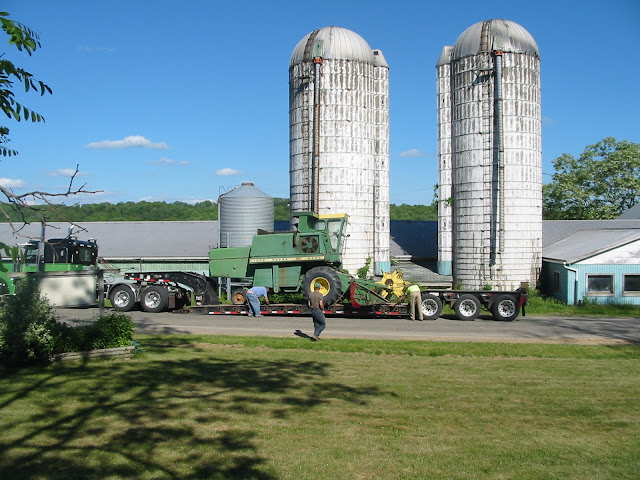 A John Deere 4400 self-propelled combine, circa 1972.  It's 40 years old, but runs well and should last us as long as we want to use it.  There are some cosmetic issues, but what 40 year old doesn't have those?  A few things really do need attention - lack of brakes is kind of a biggie (they had been using the hand brake but we'd like something better), and one tire needs replacing but we have one the right size sitting on a shelf. 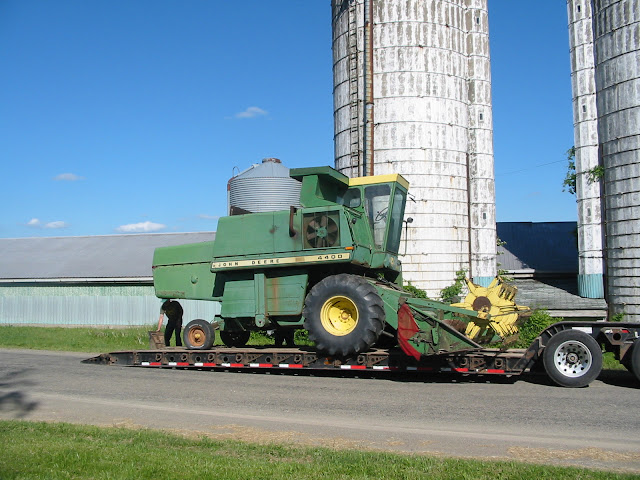 It was an Oversize Load going up the expressway.  You can kind of see that the big tires are only hanging on by half the width.  It's still small by today's standards. 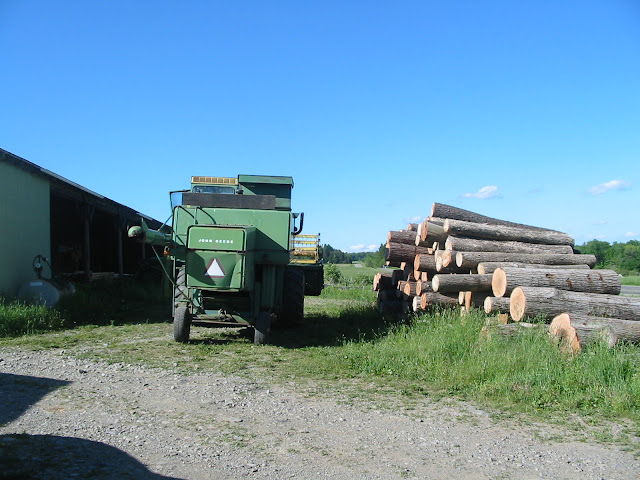 But it's plenty big enough for us when measured against our big pile of logs.  Getting it maneuvered into a building for the winter will be a treat.

Used combine, trucking expense, pending repairs..... a not-insignificant chunk of change.
Not being dependant on someone else to harvest your crop.....priceless.
Posted by Sheepmom at 1:08 PM