When our field of oats was combined last month we didn't have time that day to unload them into our storage bin. The next day rained, then we baled the straw, then something else needed doing, followed by something else and something else.  The good news is that it was OK to leave them in the gravity boxes until we could put them away.  No vermin could get at them and they were safe from the weather.  The bad news is that knowing things are "OK" is seductive and you keep putting off the chore of finishing the task.

So Monday it was clear and sunny and Andy got 'er done.  First the grain head was attached to the elevator to funnel the oats down into the bin, then the elevator was drawn down to the yard next to the bin, cranked upright and maneuvered so that the spout was lined up properly with the bin door. The tractor unhitched and moved to the side so the PTO shaft could be hooked up.  Then a second tractor backed the gravity box up to the bottom of the elevator so the grain would spill into it and be carried up and deposited into the bin.  The few cars that came down the road right then could swing into the mouth of our driveway and around the tractor.  Most drivers smiled and waved, as they could see Work Was Being Done.  One guy seemed a little miffed that he had to slow down, but it was good for him as he was going too fast for this road anyway.  Probably a 'transplant' from somewhere more urban. 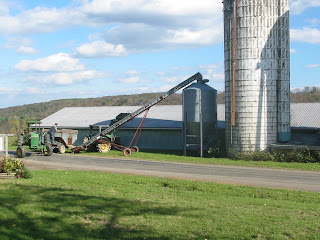 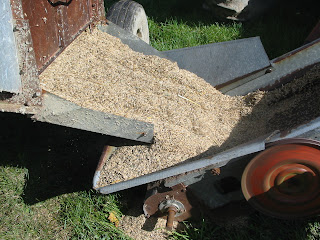 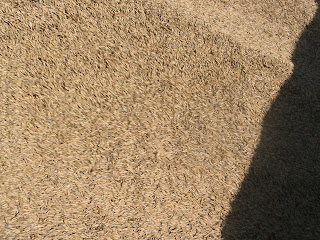 Starting to flow 'down the drain' 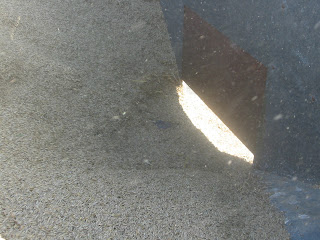 Flowing along and kicking up dust
The inside of the gravity box is built like a lopsided funnel.  Being made of smooth metal, the grain flows like water down and out.  Hence 'gravity box'.  Because the grain is very dry (as it must be to keep from spoiling in storage) moving it causes billows of dust and oat hulls and chaff.  The flights (crossbars on the elevator chute) carry the grain up, but because the grain is trying to flow back down you get an odd hypnotic effect of movement in 2 directions at once, like watching a Slinky try to come down an Up escalator.  And all that tumbling blows more of the chaff out. 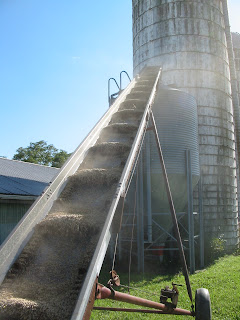 Up... I said UP! ...the elevator
With the wagons unloaded the elevator is pulled away and cranked down into a more horizontal posture for travel.﻿ 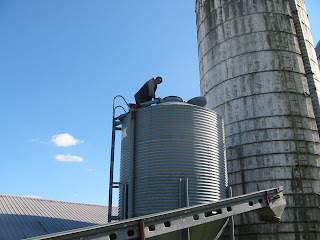 Looks good - still got a few feet of room in there. 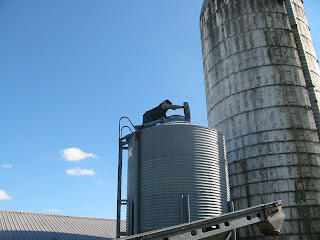 Closing the lid on the oat crop for the year.
That will be more than enough to supply the flock for the next year as they only get grain at certain times and the oats are only one component of the mix they get. 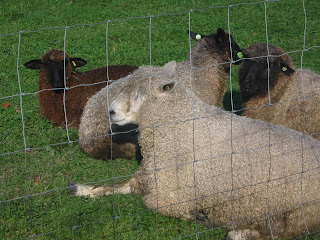 Email ThisBlogThis!Share to TwitterShare to FacebookShare to Pinterest
Labels: Oats