Shearing and an Anniversary!

Actually the anniversary was yesterday.  The blog has been up for four whole years!  Where does the time go?  Days and months and years blend together when you are really busy.  I've heard older people lament that "the years fly by but the days just crawl".  Not us!  It seems like a mad dash every day and we still don't get it all done.

Sunday we went through the flock and changed coats up a size or two on everyone who needed it, which was most of them.  There are some awfully pretty fleeces under those coats!  We also combined and moved all the bred ewes into the area Andy had just cleaned and shuffled the others into groups that fit the vacated areas.  Musical chairs, farm style.   He'll get the remaining sections cleaned as soon as possible.  It was a full day and we were both cold and tired when we were done.  The bred ewes were happy to have more room to move around. 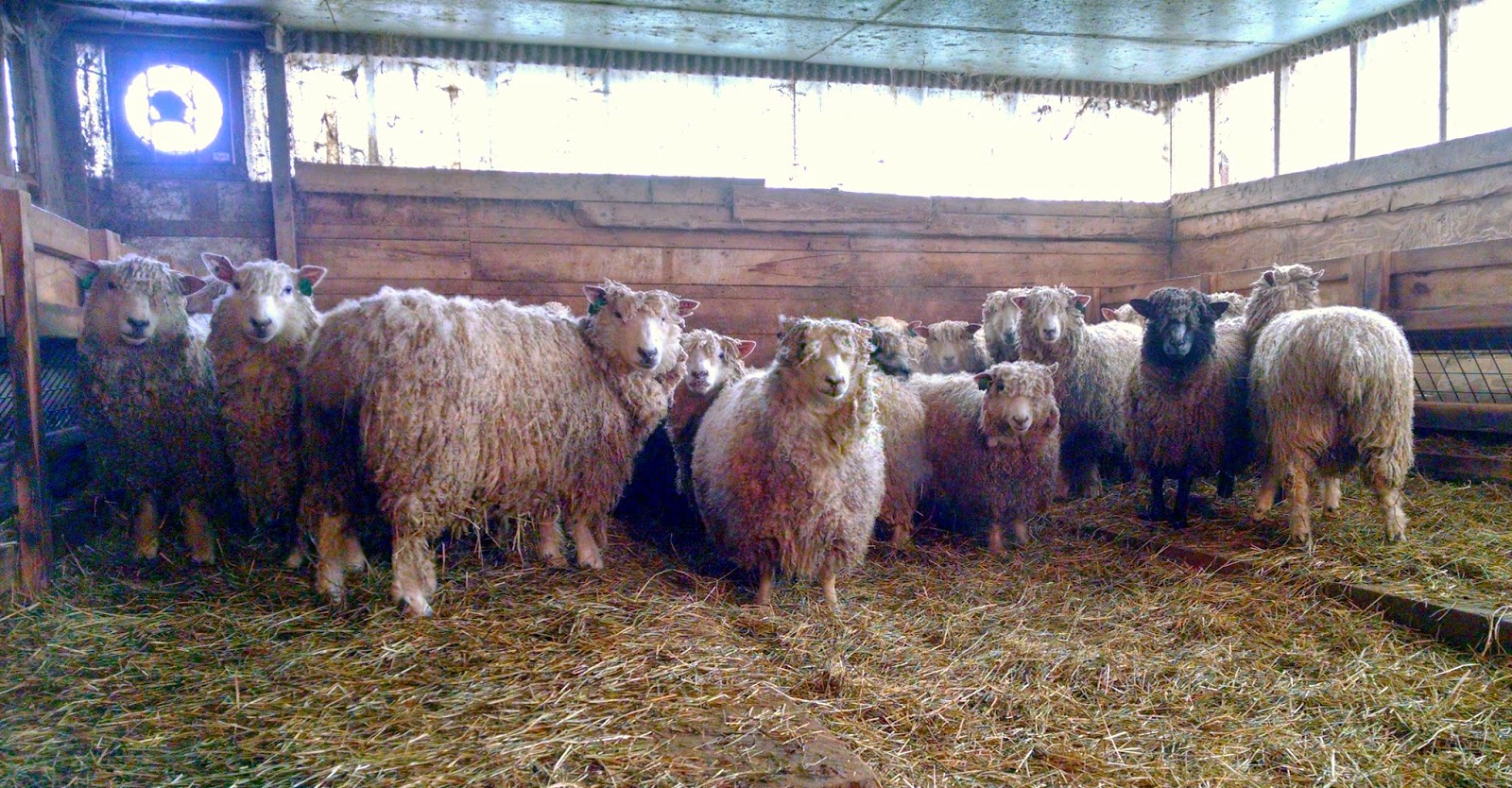 They are looking at me here with deep suspicion because we were setting up to shear them.  The rest of the flock will follow in a few weeks. When I scheduled the date it was forecast to be just around freezing - a real warm up from what we've had.  Instead we got #*%&! 16 degrees in the morning.  We closed up the barn and it was about 25 in there while we worked but it's hard to handle resistant sheep with gloves on so off they came and (as usual) I got really cold before we were done.  The sheep were actually relieved as they have been huffing and puffing under all that wool.

We don't coat the Cotswolds because they tend to felt even if the coat fits well.  However, they are super clean and free of the dreaded VM (vegetable matter - ie. hay chaff) and I'm looking forward to having the fleeces available for sale. 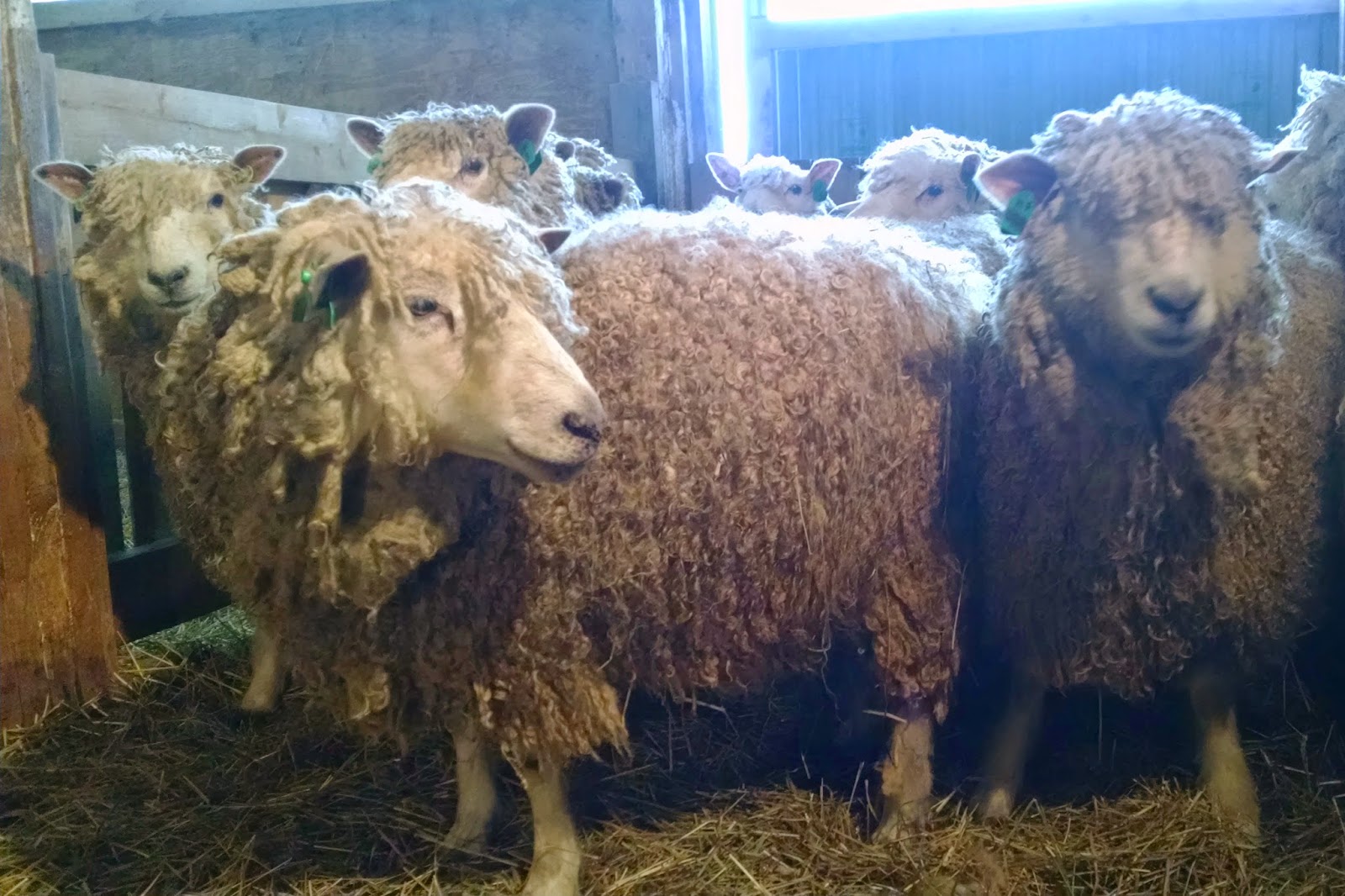 We penned about 12 at a time which was a nice amount to work with. 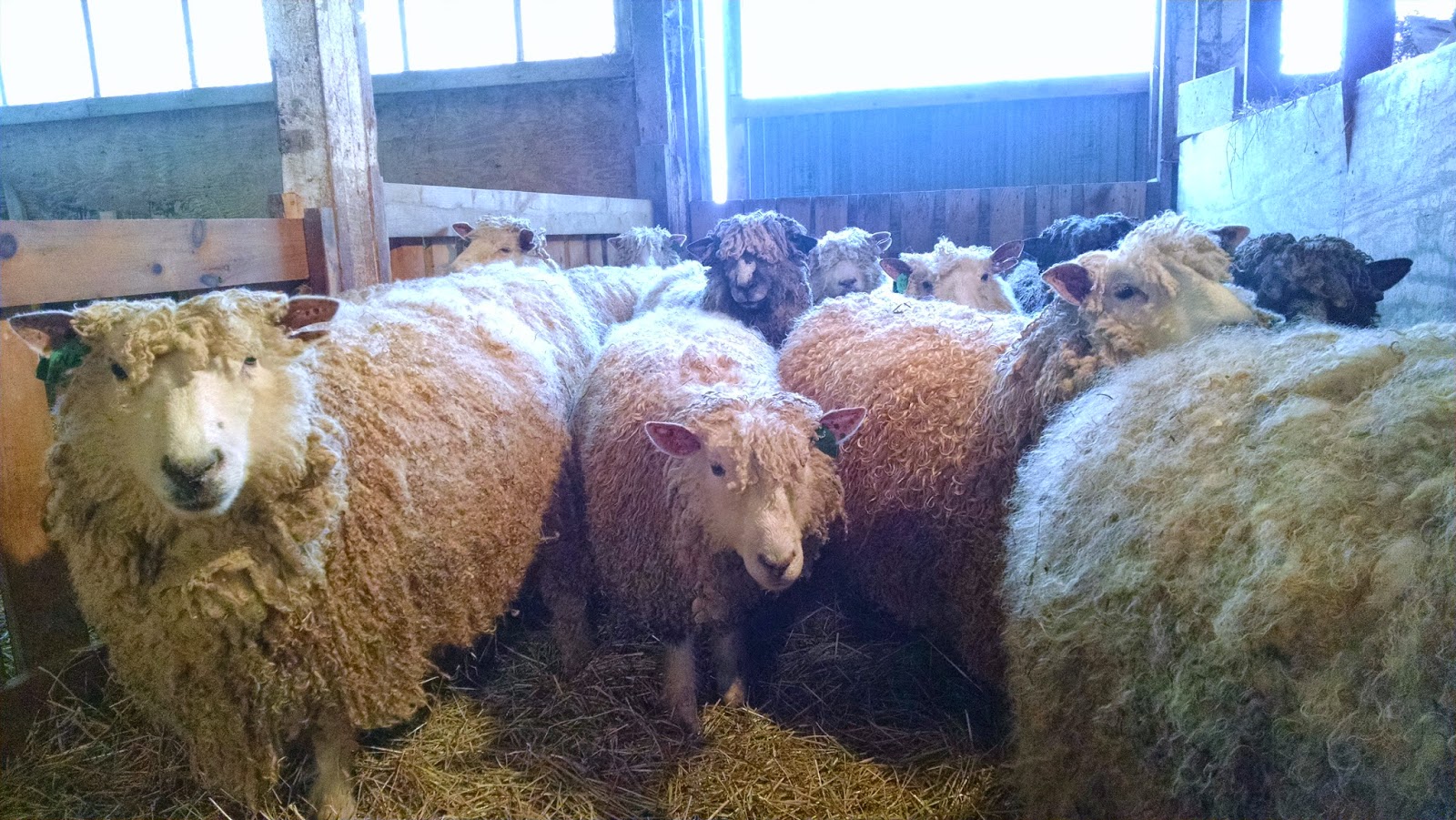 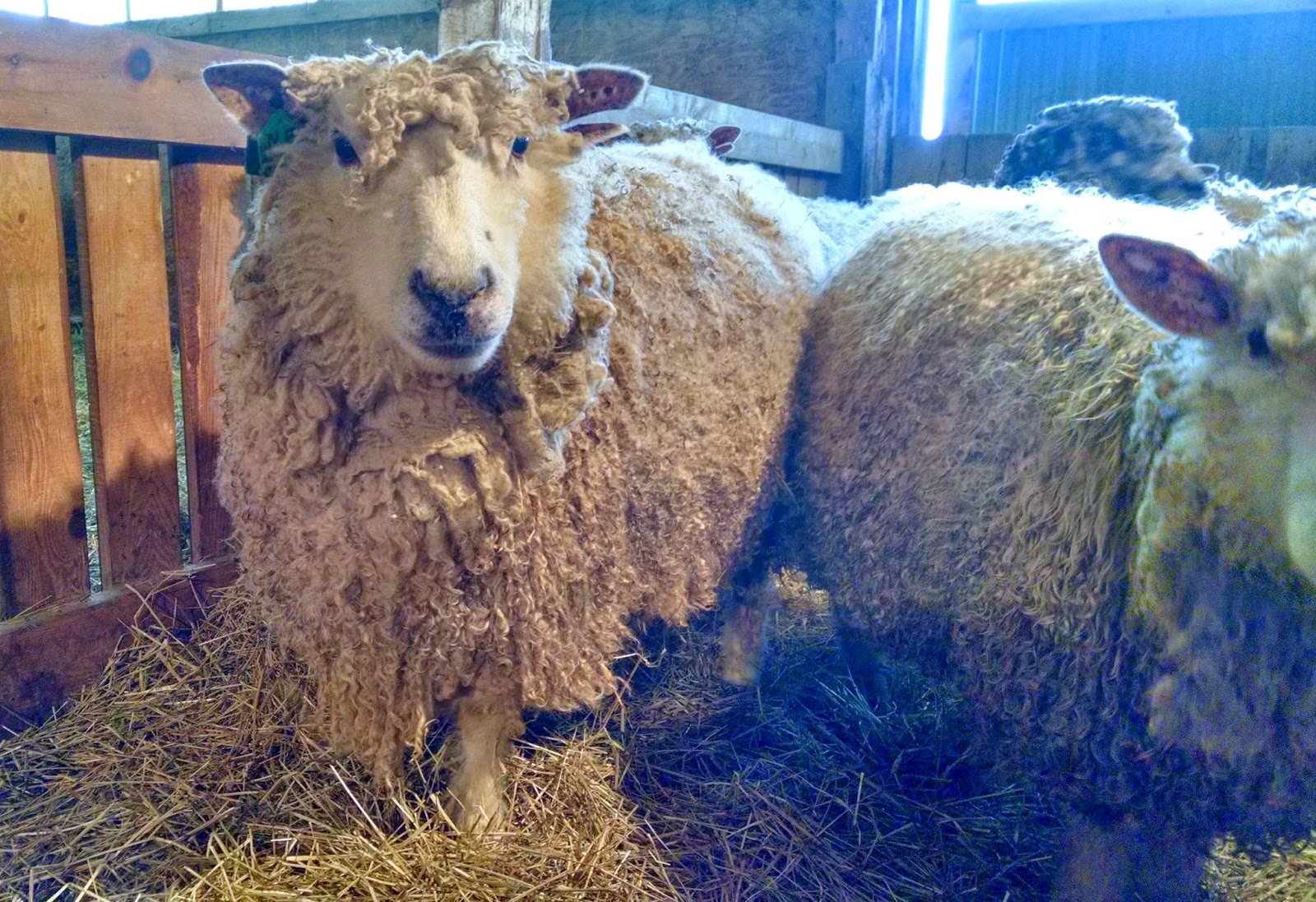 "I has some doubts about this, I do."

Our hay so far has not been contaminated with burdocks as it was last year so the characteristic forelock the breed wears didn't get trashed and I had the shearer leave them on for fun.  If they get too bedraggled I can always clip the locks off with hand shears.

A blurry pic, but too funny not to include. 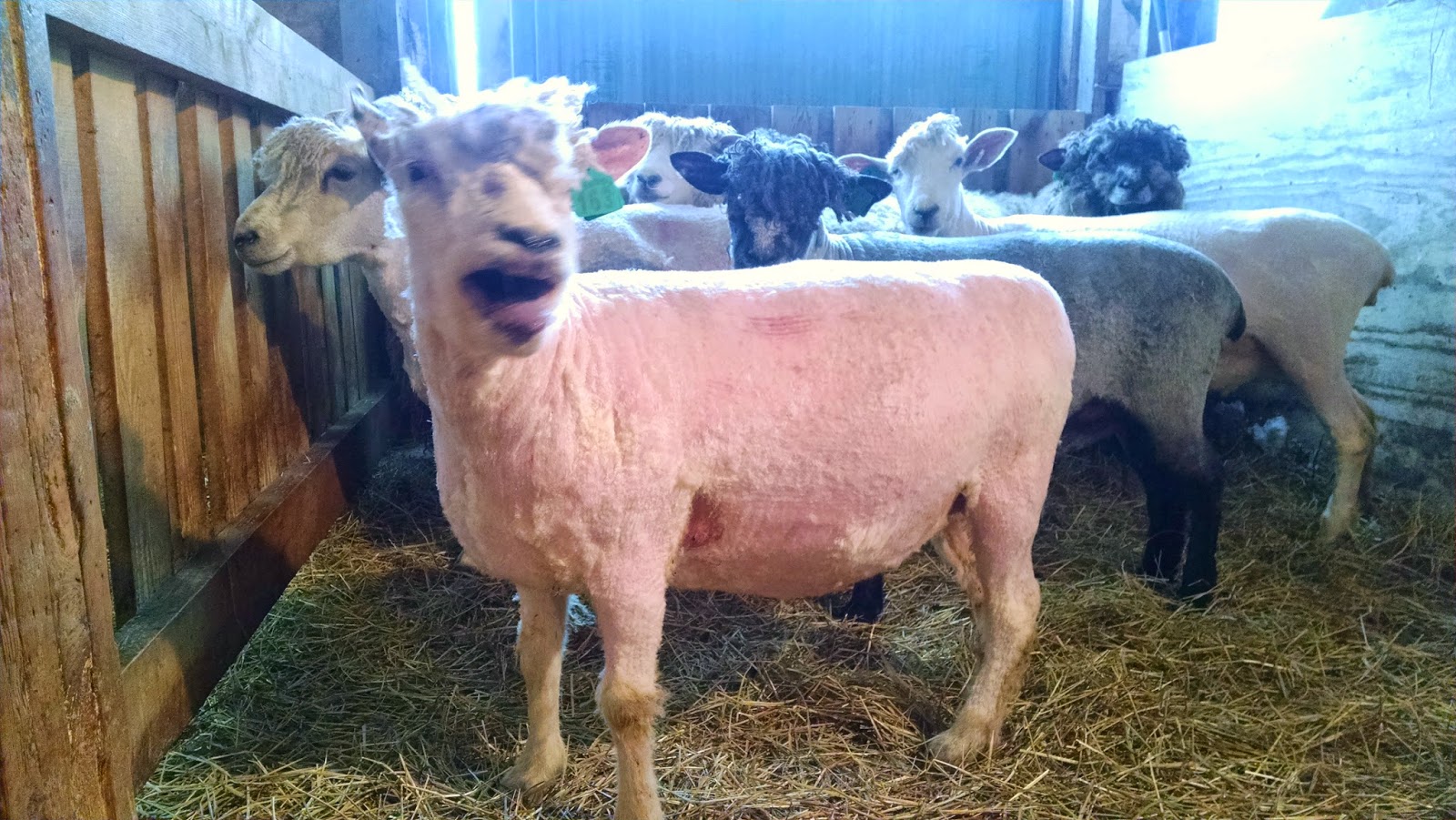 HEY EVERYBODY, I JUST GOT SHORN! "

The ewe, Mercy, was not really concerned with events as you can see from her casual sauntering back and forth while her friend is shorn.  If you notice a few nicks on the ewe, don't worry.  They are really very small but look serious against the white hide.  They have barely broken the skin.  Also, the long hooves.... they don't get worn down at all during winter when the sheep are on the bedding pack but we'll trim them back to a proper length after each ewe lambs, before they are released into a mixing pen.

As each group was done we turned them into the other side of the pen.  They were happy to have hay in front of them again.  Knowing we were shearing in the morning, we didn't feed hay last night so that their rumens would be somewhat reduced in size and handling them would be easier on them and the shearer. 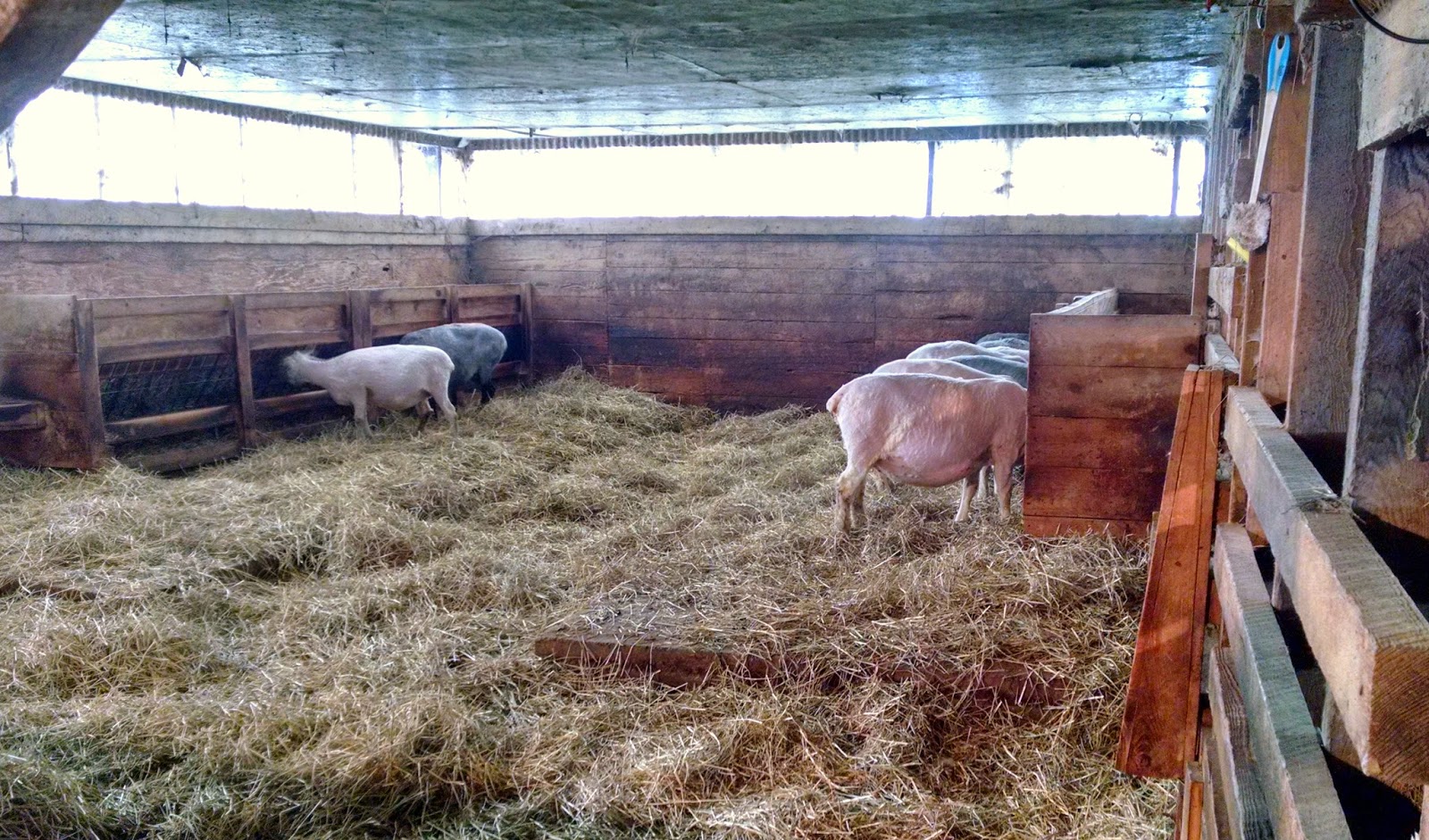 In all, we did 35 big ewes in about 5 hours including setting up the shearing equipment, moving 3 groups into the shearing area and taking 2 short breaks to warm up with hot coffee.  And here's Irene - "the one we were looking for".  (The last one of the day).  Belly wool comes off first, then he cleans up the inside of the back legs and crotch area, then moves to the main body starting with hind leg and side, then she gets tipped up and the fleece opened up through the neck, head gets cleaned up here then neck, shoulder, front leg, lay her down and make long strokes to clear the back, roll onto her other hip and clean shoulder, leg, rib, leg and down to the tail.