We received about eight inches Tuesday of the wettest, heaviest, sloppiest snow and ice mix you could imagine.  Power went out around 9 AM and Andy fired up the generator.  They missed the projected 11:45 restoration time, ditto the 1:45 time and finally got it going again around 3 PM.  That lasted all of half an hour and it went out again until 5:30.  A quarter inch of ice accumulated on everything and then snow stuck on top of that so I'm sure fallen wires and/or trees played into it. 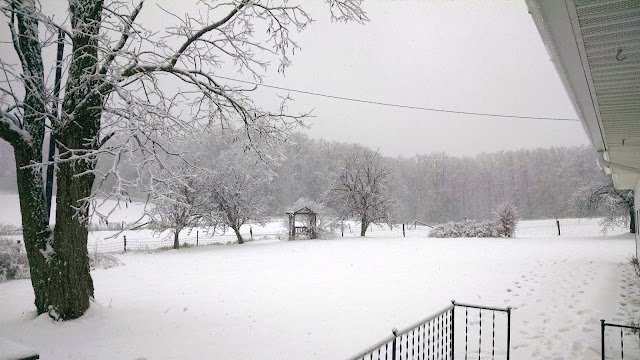 Most of the culverts are frozen and the ditches filled with snow from the plow so water turned the snow to slush and started creeping across the road in many places.  Judging by the river of slush in the diversion ditches in the pasture it was a fine day to stay home. 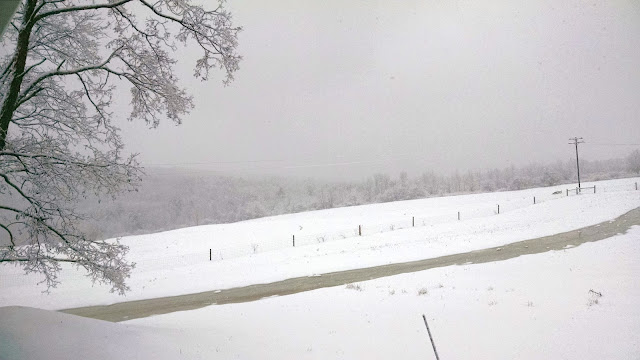 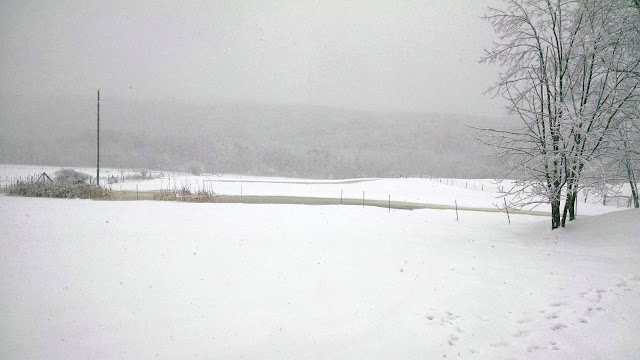 Tuesday, just after midnight and before the snow started to fall, we were woken up by Holly barking.  She normally only barks when someone pulls in the driveway or there is a cat fight within earshot.  She is The Enforcer around the cats - if anybody starts to mix it up she is right there, putting a stop to it.  Anyway, it wasn't cats making her bark, it was coyotes.  Even with the windows closed and latched for winter they were loud and close.

We have a very tolerant attitude toward the local coyotes.  If they don't bother us, we don't bother them.  To date there has not been any problem with them, partly because we don't leave the sheep out at night.  Also playing into their good behavior is the concept that you learn what to catch and eat from your momma and if you aren't taught to take sheep (or goats, or calves or whatever) that you won't go after them unless you are really in dire straits for food and start looking at novel prey.  Moral - if the pack in your area isn't bothering you, don't kill them 'just in case' because another pack will move in and they may be very well versed in killing sheep.

It's a reasonable arguement in the light of day but on a dark winter night the howling was raising the hair on the back of my neck so I went out to make sure everything was OK and scare the coyote away.  In my sleep-addled mind the smart thing to do was make a lot of noise so I grabbed a cookie sheet out of the dish drainer and the scoop from the grain bucket on the porch and sallied forth down the road making a big racket. (Remember the cockney cook in the kitchen while everyone was singing the Spam Song on Monty Python and screaming "Shut Uuuuupp!  Everybody shut uuuupppp!"?  Yeah, it was like that.)   He did stop and after checking both barns (the sheep were fine although the ewes weren't thrilled about the banging I had been doing) I went back to bed.

About 2 AM this morning the same thing - close and loud howling and Holly barking.  This time Andy got up and went out to check the situation.  He reported back that the sheep were all fine, very unconcerned, and he could see where three large sets of prints came out of the field just on the far side of our north outbuilding (his sawmill), crossed the road to the sheep barn side, milled around the north end of the barn peeing on tufts of grass, went south in the road right past our mailbox and barn door, jumped the ditch back onto the house side of the road and went along the ram pasture fenceline toward the woods.  This may be a routine for them as there have been other mornings where we see prints the size of Holly's and she is all worked up smelling the mailbox post, but the howling was a new feature of the visit.  We decided that just to be safe we'd make a barrier across the ram's open doorway so they'd be in the barn for the winter and not have access to the outside and the outside wouldn't have access to them.

Then, today, I came out of the wool shop at five of noon to come in for lunch and hear a coyote, loud and close.  I look to the south and there he stands, plain as can be, on the open ground between our house and the neighbor's.  Really????  Holly wasn't having any of it and started yelling at him. (I should have zoomed the camera - he's a dark speck just to the right of the roof of the lawn swing on the line just between the clean snow and standing weeds).


The crack you hear right at the end of the video is Andy firing off a round.  I didn't know he was at the side porch and planned to kick up snow right in front of the coyote to scare him.  It was coincidence that I hit Stop just as he fired.  If I had kept filming you would have seen the coyote wheel and bound into the woods.  We walked up to check if he had been hit or not.  His reaction was so violent to the shot that Andy thought he might have actually nailed him and we don't want to let any animal suffer.  Turned out to have been a clean miss but the bullet must have literally flown between his legs and plowed into the snow just a foot or so behind him.  We could see the slice of its path in the snow and there was no blood, just a scramble of tracks and then big bounding leaps which we followed into the woods a good ways to be sure.  We hadn't intended to take a walk in the woods, what with ice covered branches occasionally falling, but it was pretty. 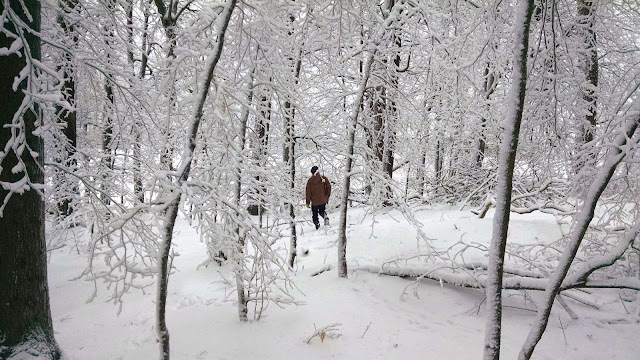 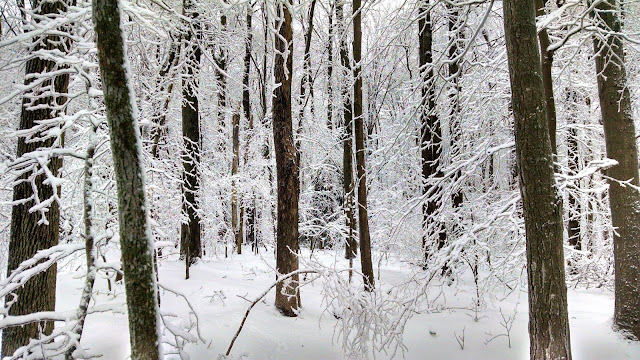 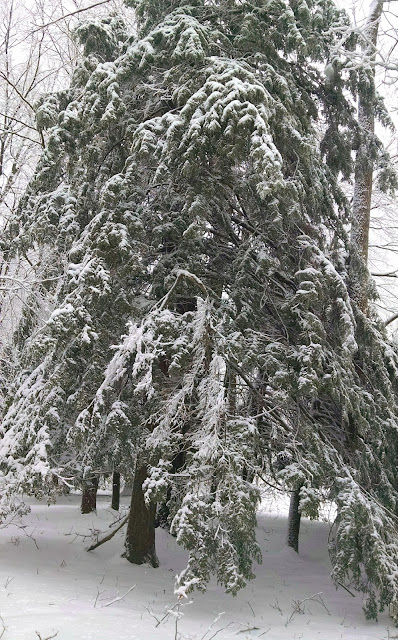 In the afternoon we used a sixteen foot gate to span the open doorway to the ram's pen and then attached sheets of plywood so it's a solid barrier to five feet and another foot or so of gate above that.  Is it predator proof?  Probably not to a serious, determined one.  But it's definately predator resistant.  There have been no tracks in the pasture or the ram's small yard but we both feel better with a bigger physical barrier between the boys and the great outdoors than two wire fences.

While we've not had any problems with the resident coyotes we never know when that might change.  This might be a new alpha male staking out his territory or pack boundaries have changed and now we're the place where they yell about it.  Whatever, coming out at NOON within sight of two houses, a barking dog and people (I'm sure he must have seen and heard me, too) is too much.  I hope the cocky bugger got the scare of his life and chooses to go elsewhere or at least be quiet about marking this part of his territory.

Good Holly.  You really told him.
Posted by Sheepmom at 8:38 PM