Today marked the end of breeding season for the flock.  The die is cast and now we just have to wait and see how everyone did.  It took all morning but was accomplished without mishap.  I needed to put a new coat on both BB and Tux, push the ram lambs into one area while we set up really sturdy barriers, moved some gates...stuff like that.  When putting rams back together after breeding season you have to confine them to a very small area so they're less likely to hurt each other seriously.  If they have room to back up and get a run at each other somebody can end up dead from a broken neck.  In a small area they can only shove and thump each other in the side.

We pulled the rams from their groups and tied them in the trailer for the move back to the upper barns.  We brought in all the other rams who didn't get used this year and got them settled in the smaller pen, then led in the other boys.  We moved Mr. Bill and Tux down to the ewe barn since they are both wethers.  The big rams would pound on them in the small "get re-acquainted" pen and the ram lambs would have just pestered them endlessly so they get to live with the girls for awhile.  Hopefully the big rams will soon work out the pecking order and we can give them more room.

The ewes were interested when the guys were taken out, but nobody seemed too sad. 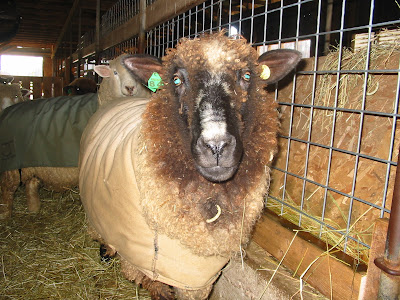 "When he first got here last month I thought he was the greatest thing since baled alfalfa, but honestly now I don't know what I saw in him.  He was fun for awhile, but I can't say I'm sorry to see him go."

Ouch.  Kinda harsh, there, Sprinkles.  Sheep girls are so fickle.
Posted by Sheepmom at 2:56 PM