Sittin' on the Bench

This year for breeding season I used fewer rams than usual.  This was due partly to needing more floor space for the spring lambs who are still here, and also because Lucky got a large group of ewes that other years I had split between two rams.  So, keeping the bench warm this season are (left to right):  BB (foreground), Ian, Ike, Jared, Tux, Isaac and Mr. Bill. 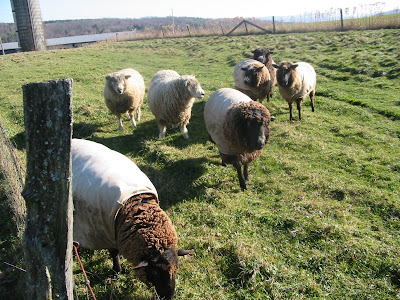 They spend the days as they did all summer - sitting under the edge of the woods or slowly strolling the length of the pasture grazing as they go.  Grass is getting pretty well picked over and we offer hay when they come in at night in case they aren't satisfied.  Once in a while someone will get moody and they all have to shove each other around and butt heads, but mostly they seem happy to loaf around with no responsibilities this year.
Mr. Bill and Tux are wethers, so they don't feel like they're missing a thing anyway.  BB was going to be a wether, but ended up having a tough summer (he's apparently very susceptible to the blood-sucking stronglyle Haemonchus) fighting anemia so we didn't dare subject him to castration.   By fall, when he was doing better there wasn't really a reason to neuter him since he was always going to be living in the bachelor barn anyway.  He's very sweet tempered and not a problem at all.  Really, all the rams here are very good except Isaac who is not aggressive to people but can channel his freaky, wild animal side in a split second when you want to catch him for any reason. 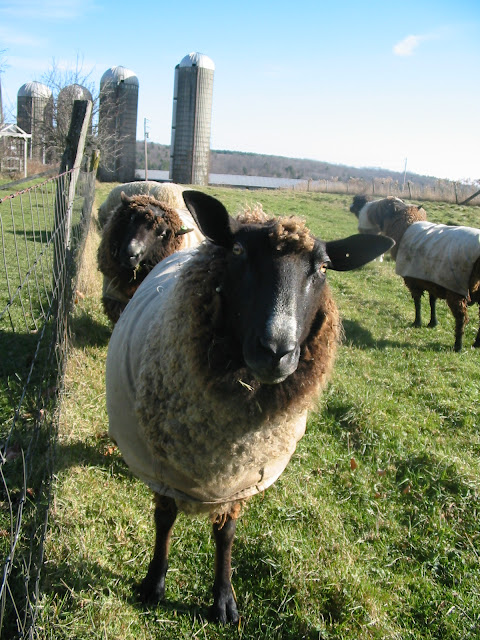 I don't know what anyone would complain about.  We have good grub and a nice place to sleep and get pets every day - what more could there be?
﻿
Well, Bill, it's like this.........oh never mind.  Get one of the boys to explain it to you.
﻿