Nose of a Warrior

Holly hates rats.  She knows darn well that they are vermin and shouldn't be. in. the. barn.  Not surprisingly, we have some and this time of year more are coming in from the fields and trying to set up home in the sheep barn.  She likes to hunt mice, too, but that's always a fun happy game with wagging tail and if she finds a nest she chomps them down.  Yum!  Rats are different - show no mercy, make sure they're dead and you don't eat them.

As an aside, it's a good thing my pet rat, Cyrano De Bergerat, went to rodent heaven after a long life many years ago.  There would have been.....issues.... had he still been around.

So tonight at chore time one large rat made the fatal mistake of getting into the big metal feed bin where the sacks of grain sit until needed.  You'd think that SIX barn cats would be a deterrant........yeah, you'd think so, but apparently not so much.  Holly knew immediately he was in there.....could probably hear him breathing, even.......so Andy picked her up and set her in.  Rat pinball!  Despite evasive maneuvers Holly was on him with the focus of a laser.  He put up a good defense, but she emerged victorious. 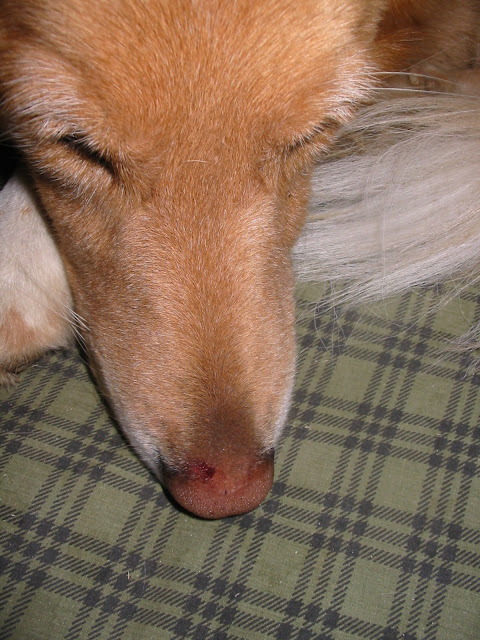 What a good, brave dog nose.
And got a well-deserved handful of kitty kibble (oh joy!) and a nap on her soft doggie bed as reward.﻿
Posted by Sheepmom at 7:20 PM

Email ThisBlogThis!Share to TwitterShare to FacebookShare to Pinterest
Labels: Holly