We've had some nice weather lately - bright sun all day and clear nights with an amazing show of stars.  I would hate to live somewhere with so much artificial light at night that you can't see stars.  As the earth cools each night the ground is covered with a very heavy frost by morning, making a pretty fuzz of ice crystals on everything. 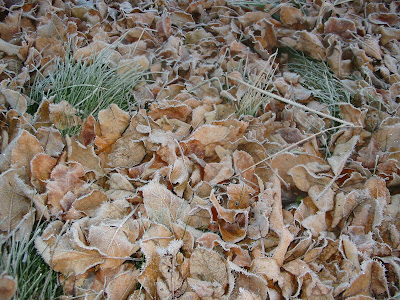 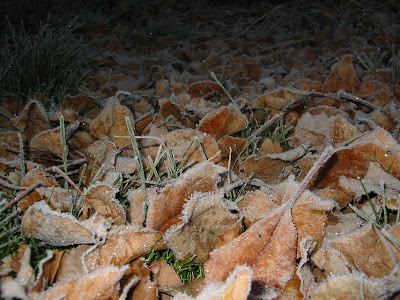 The dry weather has also finally allowed Andy to get serious about picking corn.  He's been chomping at the bit and the slow speed our antiquated equipment works at adds an element of uncertainty to the task - will the weather stay dry long enough to get it all done in one stretch of days or will it end up being periodically too wet and spread the picking over weeks?  The ground is pretty wet as it is and he got good and stuck the first day as evidenced by the mud on the tires. 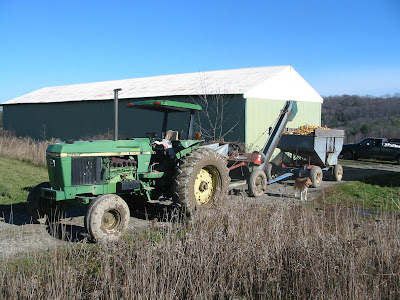 Besides that, things have been going pretty well, although slowly by modern standards.  The fellow who rents acreage from us combined 80 acres of corn in less than a day.  Andy can manage 4 loads a day with diligent running (including time to unload and move the elevator from bin to bin as needed) and will need 12-14 days to get our 18 acres done, barring serious break downs.  (If anyone knows where we can obtain a New Idea 323 1-row corn picker to have for parts we'd love to know!!)  Fast or slow, it's money in the bank, so to speak, once it's in the crib since you can feed it or sell it as needed.  This crib, another like it and part of a third will be full by the time we're done. 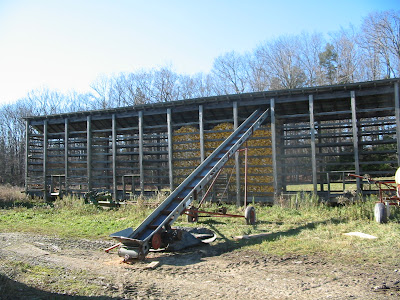 In other news, I finished dyeing a batch of gray wool (parts from various Cotswold fleeces and Mr. Lincoln's fleece) and handed it off to Acorn Works at guild yesterday.  I was trying to replace Wine Country, but I decided to put more red into the dyebath.  The previous incarnation of WC was pretty but was more plum color than wine.  I love the way the wool came out this time.  There was some lighter gray and some darker and you can really see the difference.  The pale gray came out a pinker purple. 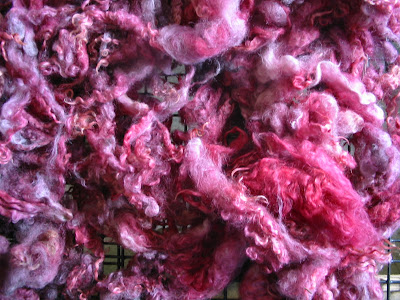 The dark gray came out more mulberry.  Some locks were nearly black to start with and they will tone it down even more when carded into the finished roving.  Can't wait to see it back! 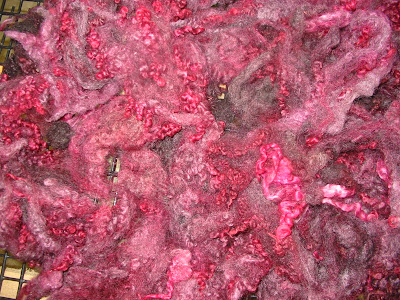 Thanksgiving is looming approaching quickly - I guess I'd better stop playing with wool and break out some cleaning supplies to try making the house look like it's not being lived in by a colony of badgers.﻿
﻿
﻿
﻿
﻿
﻿
Posted by Sheepmom at 11:21 AM